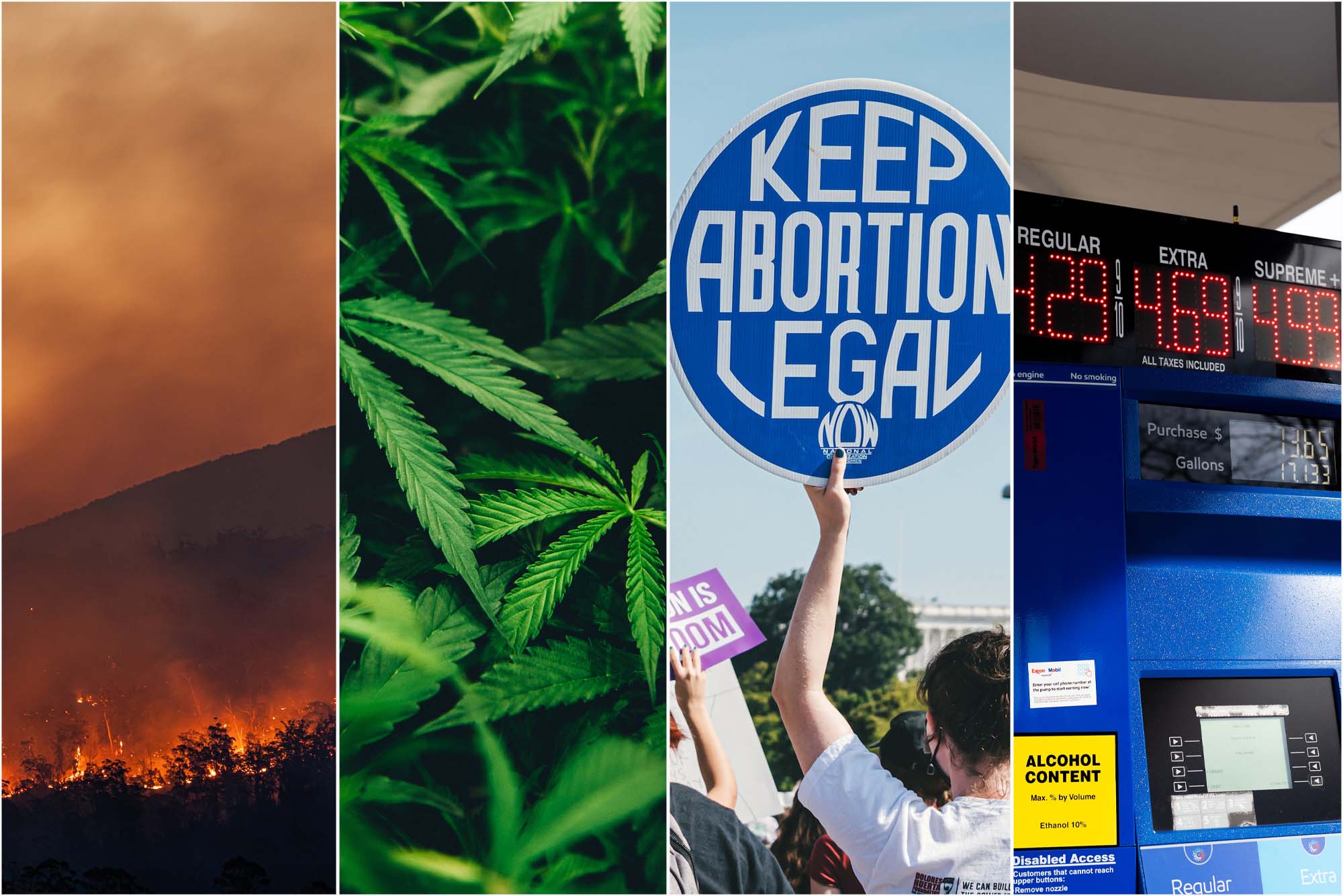 What Issues Will Decide the 2022 Midterm Elections?

Any of those hot-topic issues could help shape the results of this year’s midterm elections. It seems like the political pendulum swings in a new direction every day, shifting left toward Democrats one day, pivoting right toward Republicans the next. We asked a number of Boston University faculty experts this question:

What issue or issues do you believe or hope will weigh the heaviest on voters come election day, November 8?

School of Public Health assistant professor of health law, policy, and management, and a political scientist

On the one hand, the answer may be “none of the above.” Decades of research from political science have shown that most people who participate in midterm elections are committed partisans. This means that most voters likely made up their minds about who they planned to vote for well before the election started. In today’s hyperpolarized political environment, candidates who represent “the other side” are increasingly unlikely to represent our own preferences. Few Democrats have an incentive to vote for a Republican, and vice versa. The choice, in other words, is made for us well before the campaign begins.

On the other hand, the question of which issues might be pivotal (that is: swing the election) has a more complicated answer. Even if most voters have already made up their minds about who they plan to vote for, some may have yet to do so. The key to answering this question is to first identify which groups are the most likely to be undecided about who they plan to vote for—and then determine where that group stands on major policy issues of the day. White women who live in the suburbs, for example, were a key group that swung from Republicans to Democrats in the 2020 presidential election, and some polls suggest [they] may be more likely to be undecided heading into 2022. Consequently, although most Americans rate economic concerns as their top policy priority, objections to the Supreme Court’s decision to overturn Roe v. Wade are particularly important to this voting bloc, and may shape how they vote in the midterms.

The midterm elections this year may seem a mess unless you can find some through lines to make sense of the issue chaos. We are trying to decide, as a large, diverse, and divided polity, what we want our government to be and do. In terms of our place in an uncertain world, should it be protecting our borders and ensuring American shorter-term economic interests (immigration, energy prices, inflation)? Or joining with other countries to protect human rights and the ideas of democracy and international cooperation (Russia’s war on Ukraine, climate change, and environmental issues)? Partisan cleavages line up pretty well with those differing priorities.

On the domestic front, is our job as a political community to protect the “law-abiding,” including those who follow traditional views (strictures?) on gender rules and roles, including reproduction? Or do we want a government which takes as its job the enabling of a large range of choices in terms of lifestyle, sexuality, gender identity, pregnancy, and children and attempts to create some kind of equality between people in terms of these choices and challenges?  (Marijuana for personal use fits in there, too, as well as an attempt to undo decades of racially biased policing and imprisonment.)

Public opinion is not as unstable as it looks. And it generally favors the progressives on a lot of these issues and through lines when framed in these big-picture and longer-term ways of thinking. But the poll results can be all over the map from day to day because of media and framing effects, question wording, and manipulative emotional appeals, like those based on fear or inaccurate information. Voting may not reflect actual underlying opinion, though, due to low turnout, voter suppression, and political cynicism.

I believe that the most influential issue in this election will be the Roe v. Wade decision. I believe that it is so important that Democrats will hold the House of Representatives and expand their majority of the Senate. (Some may say I am too optimistic, which I understand.) I believe that the polling does not tell the whole story, as so many different types of voters—the poor, the young, people of color—are never polled accurately enough, and these are the types of voters who may well be driven to vote by anger over the Roe v. Wade reversal.

We have already seen the tremendous suffering this decision has brought to women all across the country. This backwards and savage decision by an illegitimate court stuffed with perjurers and liars who should all be impeached and removed has done nothing but cause pain and suffering, and there are many, many people who will see that as reason to vote against Republicans. I must emphasize vote against, because, although President Biden has gotten some important legislation passed after much public dispute, Democratic messaging has always been unbelievably incompetent and weak.

So, while some voters will vote for Democrats, I believe that many more will vote against Republicans. And I believe that the polling will not give an accurate picture up until Election Day. I further believe that the anti-Republican momentum can be enough to deny them the House, which is imperative. The Republican Party today is no more than saboteurs devoted to a madman criminal that sold us out to Russia and Saudi Arabia, and who will likely die of old age in prison, unless he flees into exile. They have tied their wagon to a corrupt and degenerate star, and this has done nothing but damage our society and our republic. I understand why people may think Republicans will take the House, and they may. In the end, however, I believe the Roe decision will drive anti-Republicans to the polls in greater numbers than pro-Republicans.

One fact must guide any discussion of the role of issues in elections: most voters do not choose their candidate on the basis of issues. Perhaps surprisingly, large numbers of voters pick their issue stands on the basis of which party they are inclined to support in the first place, and where the leaders of those parties stand and what they emphasize.

Partisanship—our sense of affiliation with, or belonging to, a political party—is a deeply held inclination that builds up over many years, even through childhood. People don’t change partisanship easily. In election after election we see that the vast majority of Democrats vote Democratic, the vast majority of Republicans vote Republican. When you ask them why they voted as they did, if they don’t just mention their party, their answers will reflect what the leaders have been pushing as their issues.

But issues and policies can help determine whether voters feel energized enough to go vote. It is clear that Democratic women feel especially mobilized to vote because of abortion. So differential turnout can be affected by issue questions—who will vote and who will stay home?

That leaves nonaligned people—Independents, plus brand-new voters. Although least likely to vote in the first place, they are most likely to be swayed by short-term forces, including current policy problems. Young voters, especially women, are being mobilized by abortion politics. But don’t get the idea that they are all drawn in progressive or liberal directions. The right-wing white ethno-nationalist movement is also fueled by young people, especially young men.

One of the biggest questions is how many Republicans will follow the dominant trend of their leadership to right-wing extremism, and how many, still attached to more traditional conservative politics, are joining the Cheneys and Kinzingers of their party, intent on wrenching their party back to its moorings, even at the risk of losing elections this year.

CAS lecturer in earth and environment

I do wish that the rise of fascism—our own violent insurrectionists pumped up with delusional anger fed by conservative money, so like the alliance between business and brown and black shirts in pre-WWII Germany and Italy and its mirror in the state violence of Putin and the strongman politics of China’s Xi Jinping, along with too many other harmful assertions in too many places—[will] weigh most heavily on voters. And that people could clearly see that the Democrats remain patriotically faithful to law, process, and reason while the Republicans have kowtowed to authoritarian Trump, scorched-earth politics, a rhetoric of cultural war, and an abandonment of reason and fact.

I wish people saw this as a worldwide event in which each human is asked to make a choice: for democracy and freedom, or totalitarianism? This choice used to be clear to Americans, and I hope they will see that it is before them again at this moment. Had Americans sided with the pro-German politicians before World War II, we would not likely be as much of a free country now as we are. Siding with the party that is still loyal to Trump will harm the unity with Europe we need right now to resist Putin, and we could lose the world war he has launched.

We will lose everything if we vote for the party that demands party loyalty rather than national loyalty, and the party that regards opponents as enemies. Unfortunately, too many have swallowed propaganda that convinces them that the rising respect for minorities threatens their position. It only threatens inappropriate favoritism, not one’s way of life, or beliefs, or sense of self. Fortunately, it is always possible even for frightened people to be helped out of misapprehension and to see things as they really are. I don’t know which way it will go, but I do know that it could go the right way if we can reach those who have not really thought these things through and have been led to be mistrustful and afraid of what they see as liberal ideas or trends.

It’s the economy, stupid. That’s what will determine whether Congress will have a distinctly red or blue hue over the next two years. But the issue that should matter is democracy. We are currently poised at a knife’s edge as a nation. Former President Donald Trump and his unhinged radical supporters have taken on a decidedly authoritarian character and threaten to overturn our democratic institutions, especially free elections, with their unambiguous embrace of conspiracy theories, disinformation, and violence. If you blink, you might think you are in the last sad days of the Weimar Republic in the early 1930s. Founding Father John Adams once claimed that democracies never last very long and have the unfortunate tendency of destroying themselves. This election cycle will go a long way in determining whether Adams was right.

What Issues Will Decide the 2022 Midterm Elections?

There are 5 comments on What Issues Will Decide the 2022 Midterm Elections?

What Issues Will Decide the 2022 Midterm Elections?
5
share this