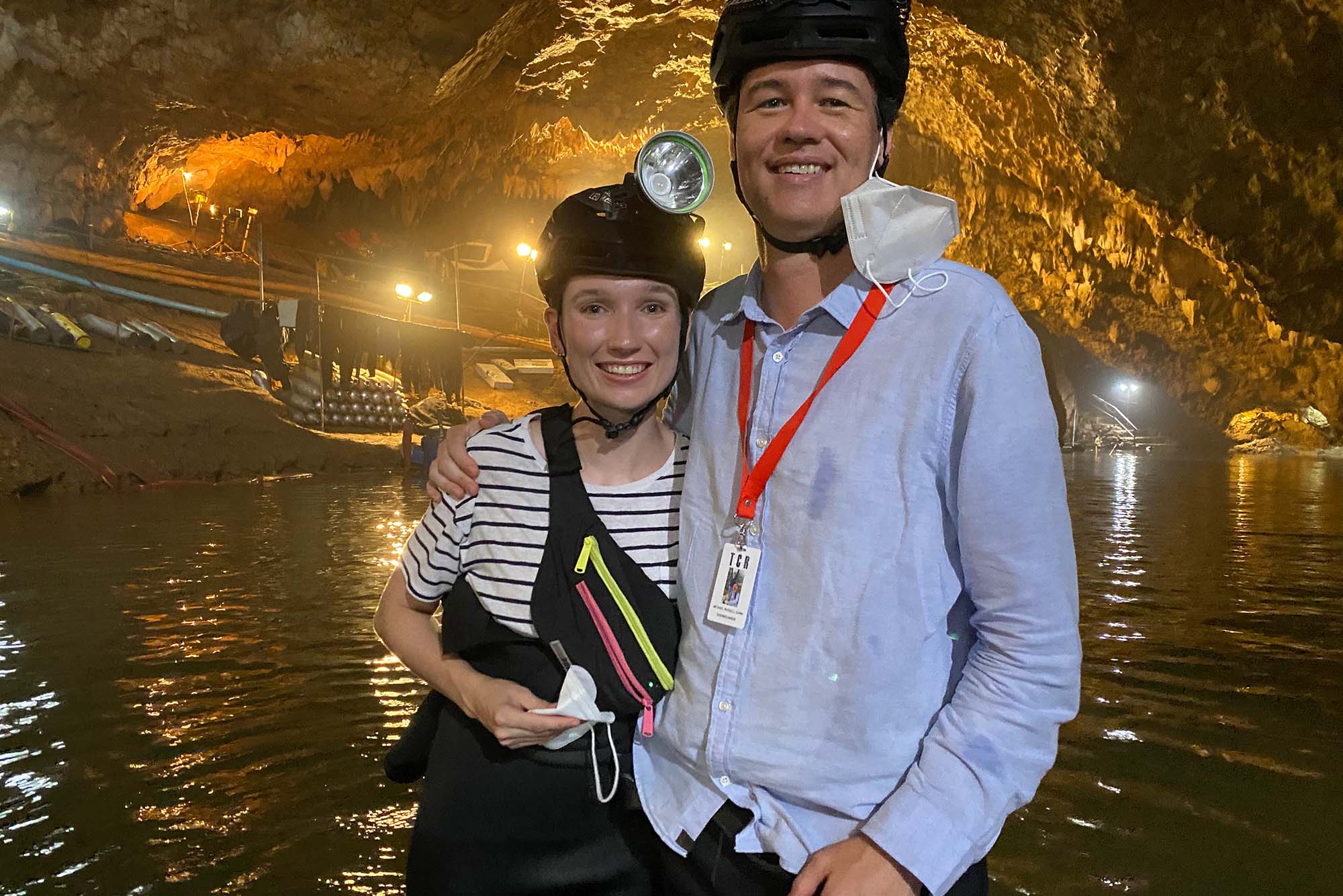 Nothing was easy about the production of Netflix’s Thai Cave Rescue, but the showrunners hope their attention to detail separates their series—about the 2018 real-life rescue of a boys soccer team from a flooded cave in northern Thailand—from a crowded field. Michael Russell Gunn (COM’07) and Dana Ledoux Miller pushed to tell the story of the dramatic rescue of 12 boys and their assistant coach as authentically as possible. That meant casting actors capable of speaking the boys’ native languages, filming in their real homes, and coordinating a complicated monsoon-season shoot in the actual cave where the boys had been trapped.

Although the story of the rescue has previously been told in documentaries and a feature film, Gunn and Miller—who cowrote the six-part series—had exclusive access to the stories of the boys. The pair, who also teamed up on ABC’s political thriller Designated Survivor, was unable to fly to Thailand during the start of the COVID-19 pandemic, so they hired a documentary film crew to interview the boys and their families, and they spoke to them via Zoom as they pieced the script together. Then, when production began, they spent seven months on location in Thailand. The result, they hope, is the first depiction of these events with the families affected at its center.

Gunn’s previous credits include story editing on HBO’s The Newsroom and as supervising producer on Showtime’s Billions. He is also a screenwriting instructor at the BU Los Angeles Program and proudly employs two Terriers: Andrew Wang (COM’09), his agent, and Tristan Roche (COM’20), his assistant. Gunn spoke with Bostonia about the challenges of creating Thai Cave Rescue, which begins airing September 22.

Bostonia: The rescue at the center of your series received worldwide media coverage when it happened, in 2018, and has been retold in documentaries and features. What made you feel like there was more to say?

Gunn: The primary thing was the rights to the boys, their families, and to the two Australians who worked with the boys inside the cave. All of the other projects have focused on the macro picture of the rescue. We were able to interview a lot more people on the personal side of the story. We came to realize that there was a whole side of the story that wasn’t being told. Something that stood out to me was just as the boys were struggling through a very harrowing physical and mental journey, they found ample room for humor. That’s a part of the story that most people haven’t seen.

Bostonia: How did you tap into the personal stories of the boys and their families?

Gunn: We had our plane tickets [for Thailand] and the lockdown happened and we couldn’t go. So, we hired a documentarian and her crew to go and interview the families, and we would meet them on Zoom and ask them questions. And that continued right through the production, where there were things we were tweaking in the story to make sure they were accurate and reflected the real circumstances.

The biggest part is understanding each of them and the universality of what they experienced. The families were bound, despite class and ethnic differences, by this event that brought their sons together. It’s really an extraordinary story of humanity. And in this time where we’re faced with pandemics and war and energy prices, it’s extraordinary to see the world come together for kids who have no geopolitical clout.

Bostonia: How close to the spot where they were trapped did you film?

The cave is massive. It has nine chambers and they were trapped one and a half miles inside. We filmed in chambers one, two, and three. That’s as far as we could go because we were filming at the same time (of year) that they were trapped, in monsoon season, and so it was flooded. We weren’t allowed to go beyond that. When you watch the show and you see the divers walking and running in the cave, that’s all real. That’s our stunt team in the real cave. And then we did a LiDAR [light detection and ranging] scan of the entire cave and re-created the chamber for the boys on stage.

Bostonia: You made other creative choices that had to complicate the production, like including a range of dialects. What went into making those decisions?

We filmed in their real houses. We filmed in monsoon season. It was not easy, but it was by choice. Authenticity was very important to us, and we worked really long and hard with all of our Thai partners—Thai casting, our Thai director and production team, and specifically, the boys and the families who went through it. Our team was international in the same way the rescue team was, with all kinds of people coming in and working right alongside their Thai counterparts. We wanted to make sure that we were living as close to what they were living. It was important to us for the ethos of the show to reflect what really happened. We filmed a funeral scene—a flashback with the coach—and the families of the real boys wanted to make sure it was accurate. They built everything with our set decorating team; it was their food that was offered, it was their bowls that were used. There was this incredible generosity and goodwill.

We filmed in their real houses. We filmed in monsoon season. It was not easy, but it was by choice. Authenticity was very important to us.

Bostonia: Have the families seen the series?

The families have seen bits and pieces of it. We wanted to be careful about retraumatizing the boys and their families. So, we’ve made it available to them if they want to watch it. One of the more amazing things is that most of the boys are incredibly well adjusted. Some don’t want to go in a cave again, as you might imagine, but some of the older ones are just fine. The Thai Navy SEALs went back in to get their equipment, once the cave dried out in the dry season, and hilariously encountered one of the boys in the cave. And he was like, “Oh, hey guys!”

Bostonia: What do you hope viewers take away from this series?

The first thing is what is possible—that we can achieve the near impossible. The complexity of what the divers and the engineers were able to do is absolutely extraordinary. A lot of times we are watching things that are entertaining for reasons that are salacious or gratuitous, but this is a story about what’s possible—and that we matter. If stateless boys in northern Thailand can be saved by the world coming together, I can’t think of a better example of that.