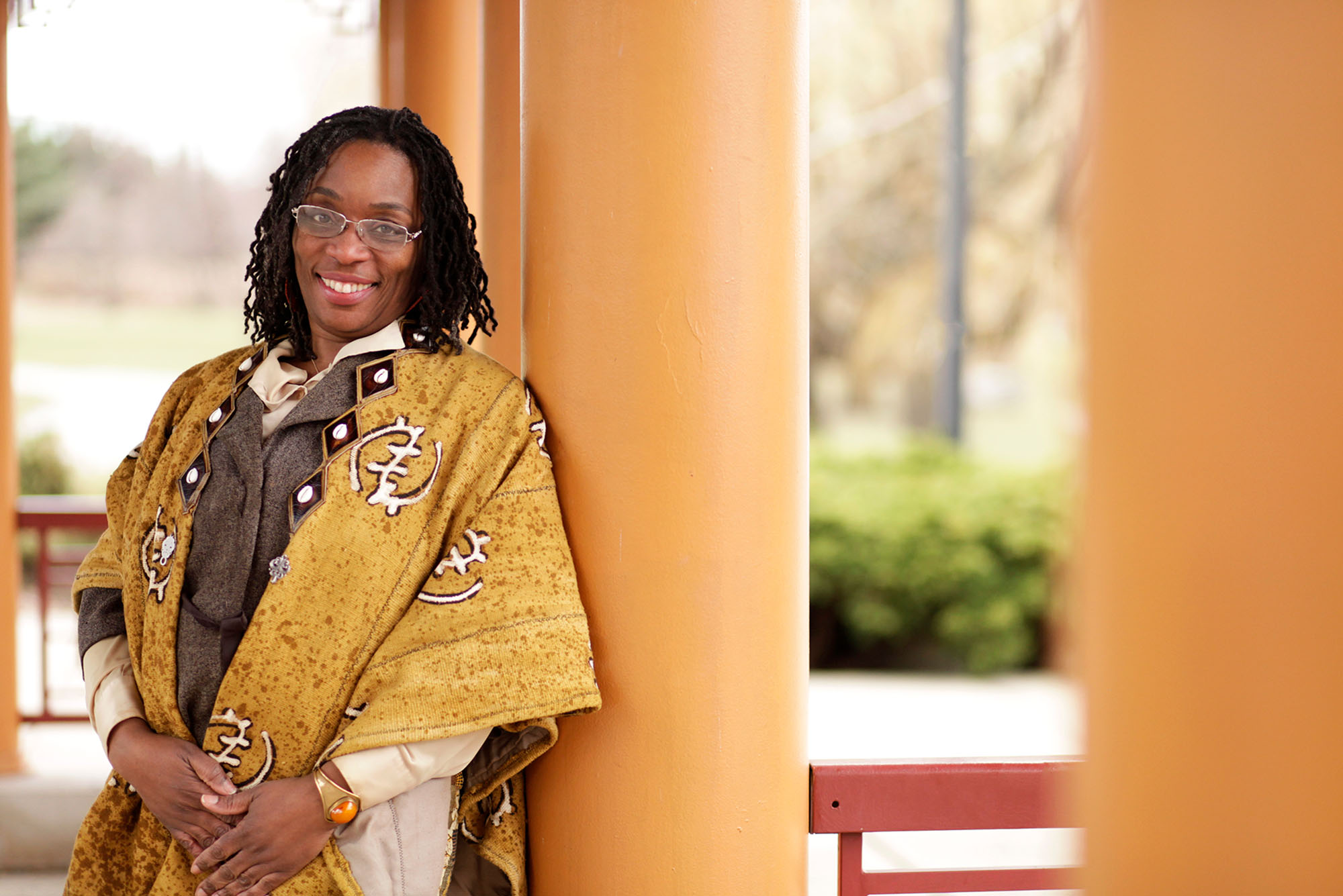 As the new executive director of the nonprofit Sage Institute in Oakland, Calif., Deidra Somerville (SSW’95) is working to provide psychedelic therapy to underserved communities who have had a difficult time accessing or paying for it. Photo courtesy of Sylvia Gonzalez Photography

Deidra Somerville (SSW’95) tackles inequality at the frontiers of therapy

Deidra Somerville believes in healing for all, and she’s followed that work down an uncommon path since last spring as the new executive director of the Sage Institute in Oakland, Calif., which provides accessible psychedelic therapy to underserved communities.

Therapy assisted by psychedelic drugs has been gaining credence in the mental health community in recent years, especially for people with depression or post-traumatic stress.

“It gives a person a chance to unlock a door they may have closed themself off to or that was closed to them,” says Somerville (SSW’95), a Bay Area native. “They can walk through it more safely and with an opportunity for resolution.”

Psychedelic therapy and its trendy cousin, microdosing, have become popular recently, but generally among the well-off, especially those bohemian baby boomers who might remember LSD, mescaline, and psilocybin mushrooms from their adventurous youth.

“I had only seen it in the context of mostly white, wealthy people. It felt a world apart for me, personally,” Somerville says. “It was not a part of any world I belonged to. And a few years ago, I began to see efforts by Black folks to question those white spaces. Why are we absent from them? How do we get access?”

The Sage Institute aims to use the therapy to support a different population, trying to spread the benefits to people of color or limited means, who might find this form of care hard to access or unaffordable.

The nonprofit works with the hallucinogen ketamine, which is used in medicine as an anesthetic. It’s used by others as a club drug and goes by the name “Special K.” One form of the drug was approved by the FDA in 2019 as a treatment for major depression. “A game changer,” one Yale scientist called it.

Ketamine-assisted therapy (KAT) has three parts to each session, Somerville says. The first is preparation, in which each client has at least three prep sessions. They are counseled not to eat for at least five hours before their session and to avoid alcohol and drugs. In the KAT session itself, they put a low-dose ketamine lozenge under their tongue and settle into a specially appointed room at the institute—think comfortable furniture, aromatherapy, a general relaxing atmosphere. At least one or two staff members stay with them throughout the experience, which can last up to three hours.

“The client is definitely the one providing the context for the work being done, shaping that time,” Somerville says. “They focus on the experiences that have led them there. It helps them access those dark places from a position of safety, with someone they feel is helping them through that process.”

The third stage is integration of the KAT experience into their ongoing therapeutic program, “making meaning” with the help of their therapist.

The overall experience is very much up to the individual, Somerville notes, adding that Sage is careful of the potential pitfalls with psychedelics and takes care that patients are fully prepared for the experience. “KAT does unlock things that may be otherworldly,” she says, “but the person is in treatment for some time before they get to this, and they go through five different assessments before they can be considered for KAT therapy.”

“Sage has opened my eyes, not only to the issue of access to those treatments, but to bigger collective questions about how systems are designed to exclude folks,” Somerville says.

“I’ve always had this foothold in community, hearing and working directly with people,” Somerville says. “I think it’s from wanting to be personally healed myself.”

A Family History of Activism and Trauma

Somerville grew up in the Bay Area, the daughter of a mother who struggled with her own clinical depression. “I had a lot of questions around healing that I didn’t have an articulated understanding of,” Somerville says, noting that her mother was also a victim of domestic violence. “I’ve always had these questions, dating back to seeing a lot of undiagnosed trauma and issues in my family.”

Her family also had a history of activism in the person of her great-grandmother, Maud Scott, who emigrated to the San Francisco area from Beaumont, Tex., to work as a carpenter during the World War II era of the Great Migration. As the years went by, she became a community organizer in Richmond, Calif., which is where her great-granddaughter grew up.

“Her first organizing effort—this must have been the 1950s—was to rezone the community for livestock,” Somerville says. “She came from a farming background in East Texas, and she led the efforts so she could raise chickens and rabbits. As a kid, I would take fresh eggs to people, and they would give us fresh ham from their pigs. I learned how to dress chickens. We were self-sufficient. I didn’t eat a chicken from the store until I was 15 years old.”

“She was trying to keep the community safe, so we would have places to play,” Somerville says. “There was crime, drugs. We saw alleys become a place where rough stuff happened. I saw a lot of rough stuff. I remember the first time I heard gunshots and began to distinguish that from firecrackers as a kid. And she went to the pool halls, went to the dealers themselves and worked with them. When they put in a skate park in an alley where there used to be a lot of deals and prostitution, she went to the dealers themselves to negotiate, so they wouldn’t come back to that place.

“She was quite the lady, and a firecracker, too. Oooh, she was something else!”

Scott’s activism also included mental health. For many years, she made her living taking in patients—mostly white men, Somerville notes—who had been deinstitutionalized but had no one to care for them on the outside.

Somerville kept her great-grandmother’s activist legacy alive as an undergraduate at the University of California in Santa Cruz, then focused on social work, earning her master’s at Boston University and her PhD in community psychology from National Louis University in Chicago.

She returned to the Bay Area twice for stints as a counselor and social worker in alcohol and drug treatment, in a program for adolescents and at a residential treatment center. It was then, she says, that she really saw how society defines illness and various disorders without reference to “systems of oppression that people of color, particularly, are often pummeled by, that has a role in either catalyzing these illnesses or exacerbating them.”

By last year, Somerville was in charge of sponsored programs and research services at Roosevelt University and serving as an adjunct faculty member in DePaul University’s psychology department. And she was paying it forward with an organization called Breaking It Down, working with grantmakers and other fundraisers to provide affordable professional development for people in small organizations with small budgets.

The job with Sage, she says, represents the best of both her worlds—a chance to stay at the forefront of therapeutic developments while also working against inequality in the place where she grew up.

She has not yet started clinical work at Sage, focusing for now on her administrative role. But she knows she is in the right place to help when she looks around Oakland, a city being transformed by gentrification.

“I walk my neighborhood now and you can see it’s like a checkerboard,” she says. “On one block, you see all these really nice houses with permeable paving and slanted roofs for potable water, and so on. And the next block you’ll see people living out of their cars and in old RVs that won’t run anymore and in tents—literally from block to block.”

The folks in the nice houses can already get any kind of therapy they want; she’s there to open doors for the other folks.

Maud Scott passed away years ago, but Somerville has lots of other family still in the Bay Area, and not everyone gets what she’s doing, although she does emphasize the science in conversation.

“I have relatives over 70 who were flower children who really get it,” she says with a chuckle. “They can see how this could be a great opportunity to put things on the map that weren’t available before. Then I have others in my family who are like, ‘Wait, you’re doing what again? Are you doing drugs?’ Those have been interesting—let’s just say they’re still questioning—‘OK, baby, make sure you come over next weekend.’ They’re keeping an eye on me.”