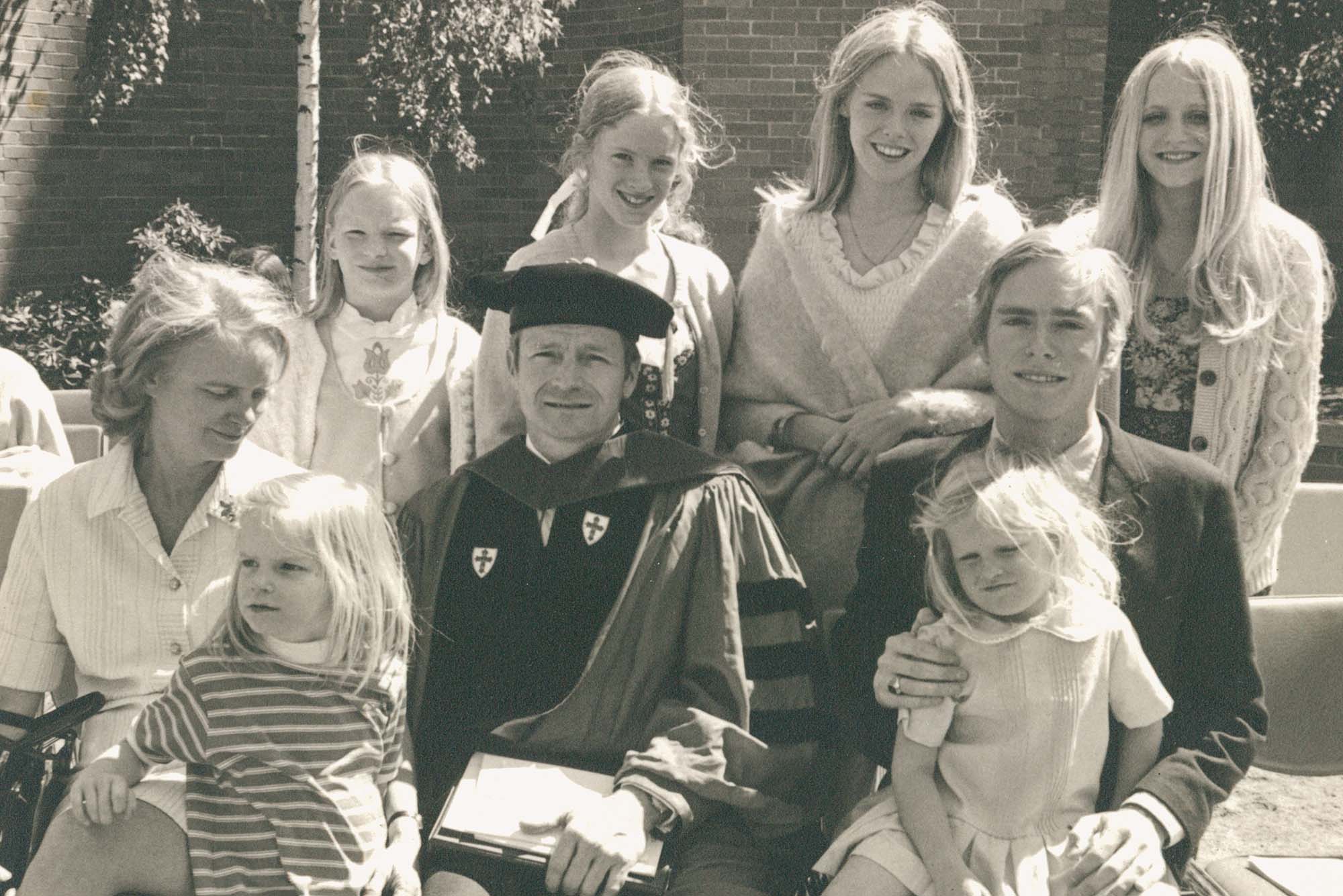 Her new book, Snapshots of My Father, John Silber, looks back at BU’s controversial seventh president

Even the late John Silber’s daughter says it.

“People who knew him either love him or hate him,” Rachel Silber Devlin writes in the preface to her new book. “None are indifferent.”

So, how you feel about Snapshots of My Father, John Silber (Peter E. Randall Publisher, 2022) may be determined by your attitude going in. But Devlin says she wrote the book because she wants you to know the controversial, high-impact BU president as she did.

“Ultimately, it is important that I tell the story because I’m one of the few who knows it and because John Silber, the man, is so widely misunderstood,” she writes.

“Misunderstood” will be a bridge too far for some. As president (1971–1996) and chancellor (1996–2003), Silber (Hon.’95) played an enormous role in building BU from a commuter school into the research powerhouse and showplace urban campus it is today. Along the way, he was usually clear about what was on his mind, his fierce intellect matched by a caustic tongue.

“He loved to debate with students or with anyone,” Devlin says, “but he never pandered, he never just gave in or belittled people. He treated students like they were adults and expected them to act like they were adults, to make sure that they protested peacefully and respected other people’s Constitutional rights.”

Those who think they know him well enough already should pick up the book and turn first to the image on page 47. It is an early black-and-white photo Silber took in a mirror, of himself and his wife-to-be, Kathryn Underwood, sitting at a diner counter in Texas in 1946. They look young, alive, eager, and very much in love.

One of seven children, Devlin grew up first in their native Texas, and from the age of 16, in what was then the BU president’s mansion on Carlton Street. She writes about how her father, who was 86 when he died of kidney failure in 2012, expanded the campus and faculty, increased the University’s role in the community, and drew Nobel Laureates Derek Walcott (Hon.’93) and Elie Wiesel (Hon.’76) and other luminaries to teach here. But she is far more focused on the personal Silber.

Insight into his makeup comes from the colorful nicknames and behavior of his Texas family and youth, as well as how he and his family dealt with the stublike right arm he was born with (mostly by taking it in stride, although it did come in handy in a fight).

Devlin’s book does not skip over her father’s temper or his willingness to contest an issue in public; to her, those qualities are overshadowed by his loving, generous, and thoughtful side. As for the infamous TV interview widely believed to have sunk his 1990 gubernatorial campaign, her opinion is clear: popular WCVB anchor Natalie Jacobson had it in for him.

BU Today spoke to Devlin, who splits her time between Newton, Mass., and a suburb of Dallas, about her father, her family life, and their time at BU.

BU Today: In your preface, you say you wrote this book in part because your father is still so misunderstood. Can you explain?

Devlin: Well, many people think of him as a conservative, or as they might put it, a fascist. But he was for his whole life the classical liberal, and he started at a very early age. The first time he knew he was a liberal was when he got up to let a elderly Black woman have his seat on a bus, and he was shocked when everybody on the bus yelled at him. He was so angry. The woman didn’t take his seat; she went on to the back of the bus. But my dad refused to sit down. He was very young, maybe in junior high, and he knew from then that he was a liberal, and he thought of it in terms of doing what’s right. And that never changed.

BU Today: You write that nobody’s neutral on him. Why do you think that is?

Devlin: I think that there is a very big divide between what it means to be a liberal and what some people think it means—that you kowtow to these particular views. Classical liberals believe that it’s like the scientific method or the Socratic method: each time, you look at the facts and you talk to all sides and you hear all points of view and then you make the best possible decision. I think that, especially today, there’s a very big problem with people who consider themselves liberal, but are very illiberal in their beliefs about who has the right to speak. They don’t want to hear opposing views and they don’t want to have a discussion with anybody they think they don’t agree with. Especially on college campuses, this is a big problem, because I don’t know how young people can learn without being exposed to all different points of view and without learning to put forward their own arguments and then learn from other people’s arguments.

BU Today: What would he think of the state of BU today?

Devlin: As I said, I think this is the most crucial point about universities today. It’s a crisis on campuses across the country, the problem with freedom of speech and the idea of safe spaces. The whole university is not supposed to be a safe place, where you don’t have to hear other opinions; it’s a space safe for hearing other opinions and discussing them.

BU Today: He could be tough as a dad at times?

He expected you to have good reasons for everything you did. I wouldn’t just have an opinion without having very good reasons for it and being able to articulate those reasons. He could help you articulate them by asking questions, but they would be tough questions. I remember one time I had very strong views about something and I wasn’t even going to entertain the other point of view. And my dad said, “OK, look, you need to articulate this better. Go write me an essay about that and while you’re at it, take the other point of view. Take the other side and write me an essay about that.” I wanted to impress him, so I did. It’s a huge lesson to realize, OK, there are other points of view, and it’s important to know what their reasons are.

BU Today: What at BU was he proudest of?

There were so many things. He especially loved the Opera Institute that was founded by Phyllis Curtin, who he recruited to the University. She was the most brilliant, beautiful soprano, and she was a great dean and a great teacher.

He was always proud when he recruited people to the University who were great in stature, but that would never be enough for him. They always had to be interested in teaching as well.

On the other end, the Boston Scholars program that he founded, bringing in students from the city of Boston, and then working with Mayor [Thomas M.] Menino [Hon.’01] on that for so many years after its inception. Ultimately, it was renamed the Thomas M. Menino Scholarship program, which was a great thing.

All of the buildings that he supervised were so beautifully planned, and the campus became so much more beautiful. When he first came to Boston, he told the search committee, “This is the ugliest blankety-blank campus I’ve ever seen.” So that was one of his main goals: to make it seem like a real campus and to make it beautiful and make it something that would be inspiring for students. I think that’s why he loved the Boston University bookstore on one end at Kenmore Square and then toward the other end of the campus, the Agganis Arena and all of that wonderful area. So, creating a great campus and a great university that had the highest, highest intellectual standards. And in every area, including scientific research, they have continued to build.

I hope that they realize what a bold and interesting man was here.

BU Today: What’s the one thing you want people to know about him?

I hope that they realize what a bold and interesting man was here. He was so energetic and interested in so many things. I mean, if there could be a Renaissance man today, he would be it.

I think that it’s important to know that he was a man of principle to the very end, and that that was because he believed in those principles. It was not a facade or anything.

I think the end of his life tells so much, because he was severely tested. Especially when his kidneys were failing, and the doctors offered him a kidney, and my sisters and I were saying, “Oh, thank goodness, thank goodness!” And he said he wouldn’t even consider it. “Of course not, there are so many younger people waiting for a kidney.” He wouldn’t consider it, that would be ridiculous. He just believed in his principles.

BU Today: What traits have you inherited from him?

I look more like my mother, but I do have a very strong sense of right and wrong, and my kids know I’m a tough customer. My youngest son, when he was in about second grade, they were supposed to make cards for Mother’s Day or something, and my son wrote, “Mom: She’s not nice, but she’s good.” [Laughter.] I kept that as a badge of honor.

There are 9 comments on Determined? Divisive? Misunderstood? John Silber, Seen through His Daughter’s Eyes