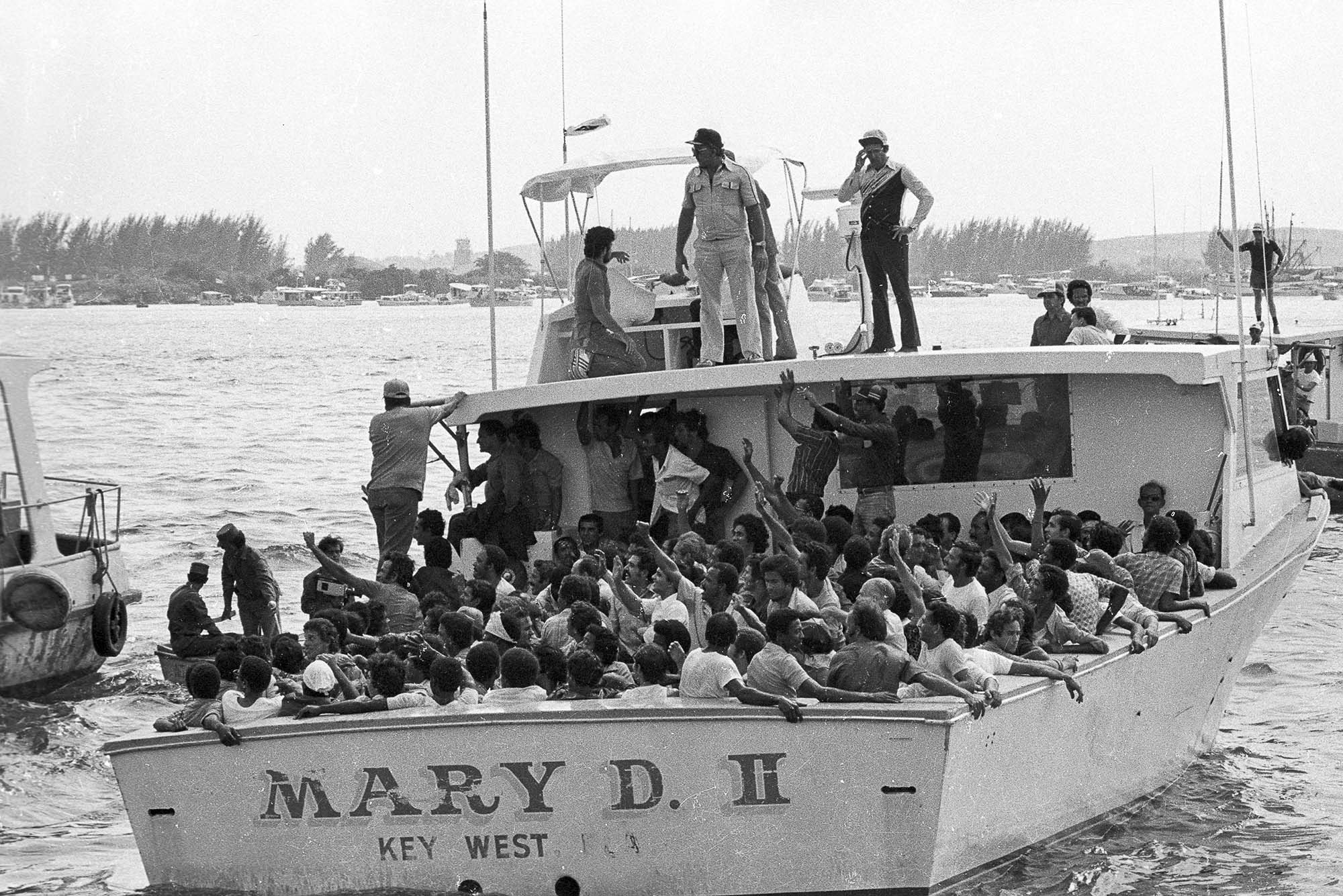 A group of Cubans aboard the Mary D. II wave as they embark for US shores from the port in Mariel Harbor, 20 miles west of Havana, Cuba, May 1980. (AP Photo/Prensa Latina via AP Images/Joaquin Vinas)

These days it’s hard to avoid news stories about the harsh greeting many undocumented immigrants receive in coming to the US, whether it’s Central American families separated and locked up in the Texas heat after crossing the Rio Grande or Haitians deported back to their homeland following harrowing raft trips across the Caribbean.

But for more than five decades, one group of immigrants met a different reception.

Since the 1959 revolution that brought Fidel Castro to power, Cubans have enjoyed a special status that the United States government does not bestow upon any other immigrant group. Presidents and Congress have given them different rules and benefits. In part as a result, they have become one of the most prosperous and politically powerful immigrant subcultures in the country.“It has given them special rights to emigrate to the United States. It has given them special entitlements once they are in the United States,” says Susan Eckstein,Frederick S. Pardee School of Global Studies professor of international relations and sociology. Eckstein’s new book, Cuban Privilege: The Making of Immigrant Inequality in America (Cambridge University Press, 2022), examines how and why immigrants from Havana were treated differently and how it has affected them—and us.

“Most immigrants from Cuba have arrived without authorization, they come without visas,” she says. “But Cubans have been able to come by any means—in a boat, by land, as tourists, whatever—and then have been able to have their status adjusted, so they are lawful immigrants with a path to citizenship.”After the Revolution, Cubans were on the receiving end of the largest refugee program in US history, Eckstein says, including college tuition, job training and placement, and much more.

Although Castro’s rebels began as self-styled freedom fighters overthrowing the dictatorial and corrupt Batista regime, their government moved quickly to a communist system. Many Cubans, especially the moneyed class, fled over the next few years amid confiscation of property and nationalization of businesses. And the US government, unhappy with having a communist regime just 90 miles from Florida, was happy to welcome them. It was all part of a Cold War strategy that also included the ongoing economic embargo (Cubans call it the “blockade”), as well as 1960s assassination attempts on Castro and the doomed Bay of Pigs “Invasion.”

“Without the Cold War, I don’t think the Cubans would have gotten these benefits,” Eckstein says. The US government was “concerned about quote-unquote communism in our backyard. I think they were more concerned about Cuba than they would have been about a comparable revolution anyplace else in the world.”

There was also irony in that US reaction to that initial wave of immigrants. While the administrations of Presidents Dwight D. Eisenhower and John F. Kennedy along with Congress hoped the exodus would destabilize the Castro regime, it may have had something of the opposite effect by removing many Castro opponents from the island.

“Arguably, the US government, in allowing the Cuban opposition to come to the United States, helped stabilize and consolidate the Castro revolution,” Eckstein says. “If those people had stayed in Cuba, they might have undermined the revolution.”

Those who fled in the early years included some political opponents of Castro, but the majority were middle- and upper-class people facing nationalization of their property and wealth. They came to the US, built new lives, and devoted themselves to loudly supporting the embargo, which has made life difficult for both the Cuban government and those who stayed on the island.

“It has really become the Cuban Americans almost dictating US-Cuba policy as opposed to presidents, for Cold War reasons, wanting to use the Cubans for their own political agenda,” she says.

Their united opposition to any softening of Cuba policy eventually shaped them into a powerful force in US politics, especially in Florida. And that meant deference from US politicians, which continues today. They became an important part of the political base, especially for the Republican Party, because Republicans take a harder line against Cuba and because the Cubans tended to be Catholic and socially conservative.

Of course, Cuban immigration has hardly been smooth. The boat trip can be a harrowing and occasionally fatal passage, and on one occasion the Castro government tried to poison the well. With the Mariel boatlift in 1980, a surge of immigration led the Cuban government to open its jails, supposedly sending thousands of criminals to Florida along with the other immigrants. This became a major political issue in the US.

“The media did a good job on that one,” Eckstein says, with an audible eye roll. “A small percentage of the Mariels actually were criminals. Some had been arrested for political reasons but they weren’t criminals. Castro did use the opportunity to make his problems America’s problem, but they were a small percentage of those who came. A small minority smeared the image of them all.”

Her book puts numbers to the question: 26,000 (of 125,000) of the Mariels had criminal records, mainly for minor crimes or political infractions. Approximately 2,000 had committed serious felonies.

Despite the resulting anti-immigrant sentiment, the push to open the doors for the Cuban community was so strong that President Jimmy Carter had to acquiesce, she says.

Many desperate ordinary Cubans set out for the States during the “special period” when the collapse of Cuba’s state sponsor, the Soviet Union, left them facing hunger and deprivation. President Bill Clinton first diverted the roughly 35,000 so-called rafters, unauthorized immigrants, to Guantanamo. But finding this unsustainable in the long run, he eventually allowed them into the US, which, in turn, enabled them to become lawful permanent residents and, subsequently, citizens.

Under President Joe Biden, the Cuba relationship has taken a far back seat to COVID, inflation, Ukraine, and other crises. But Eckstein says there has been a large influx of Cubans coming to America—many over land through Mexico—because Cuba is in bad economic straits exacerbated by Trump administration policies, notably on remittances, and by COVID’s harsh effect on Cuba’s nascent tourism industry.It’s not clear what the future holds. Younger Cuban Americans in Florida seem to hold more diverse opinions than their parents on social issues. Asked if they also could be  somewhat less hard-line about the US-Cuba relationship and the embargo, Eckstein pauses before answering: They could, she says. “But I think that’s a good word—somewhat.”