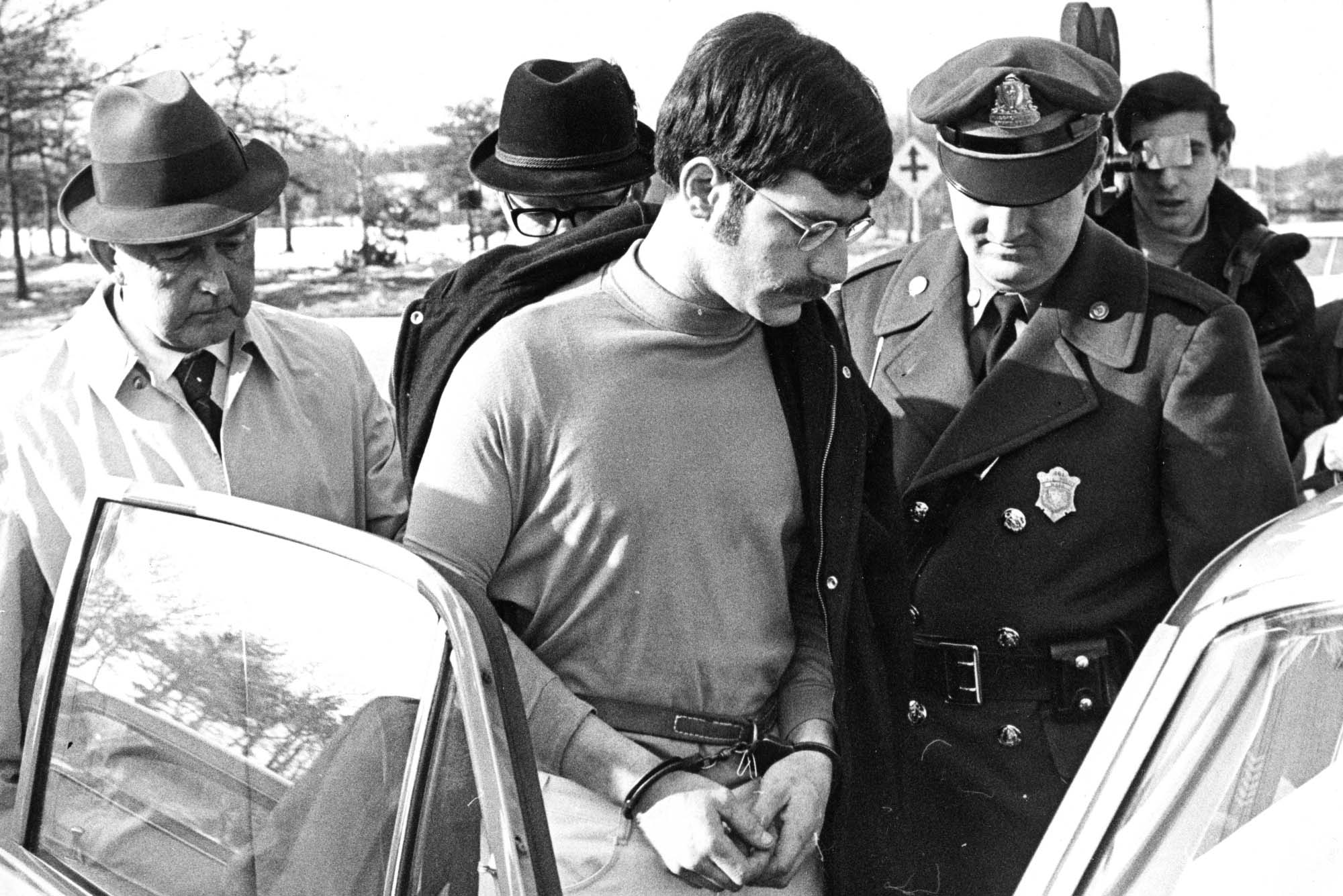 Antone Costa, captured and convicted of a 1968-1969 killing spree, is the subject of a new crime thriller, Helltown, by Casey Sherman (COM’93). Photo by Bill Brett/The Boston Globe via Getty Images

In Helltown, alum tells the story of 1960s murder spree through the killer’s eyes

Helltown: The Untold Story of a Serial Killer on Cape Cod required an iron stomach to research, as it graphically details Costa’s grisly killing spree, necrophilia, and mutilation of four women in 1968 and 1969. (He was convicted of two of the murders and suspected in a fifth in New York City.) It’s the latest true-crime book by Sherman (COM’93), whose first, A Rose for Mary, dealt with his aunt’s murder, attributed to the Boston Strangler. Since then, he’s cowritten books probing other evil, from Patriot Days (about the Boston Marathon bombings) to Hunting Whitey (about the late organized crime boss and FBI informant Whitey Bulger).

“I’m drawn to crime reporting because it’s personal for me,” Sherman says. He reinvestigated the Boston Strangler case “to give my Aunt Mary a voice that she did not have during the original investigation, where she was discussed merely as a crime statistic.”

Helltown’s subplot documents the shared obsession with the Costa case and the rivalry between two iconic writers and Cape residents, Kurt Vonnegut and Norman Mailer. In a change from his past work, Sherman mixes imagined dialogue and events with assiduously researched history, culled from trial transcripts, autopsies, police interviews, and Costa’s unpublished memoir.

Casey is currently partnered with Robert Downey, Jr.’s production company to make a limited series based on the book. “We hope to line up our studio or streaming partner this summer and plan to film the series on location in Provincetown,” he says.

Bostonia: Why did you decide to mingle fact and fiction in this story?

Sherman: I was inspired by Kurt Vonnegut and Norman Mailer to get beneath the reality of this horrific story to share it in a new way. I believe that I’ve written traditional true crime as well as, if not better than, anyone, and I wanted to challenge myself with this project. I learned a great deal during my last go-around as coauthor of The Last Days of John Lennon, with James Patterson.

Patterson taught me to build up the narrative elements of a story to supplement the litany of terrifying facts that I’ve interwoven throughout this book. The murders in Helltown were all too real, as was the killer, Tony Costa. I offered certain fictional elements as a way to provide connective tissue between the crimes and the hunt for the killer, but each literary scene is based heavily on my lengthy research of the case.

Bostonia: Was it just a compelling true-crime tale, or is there some greater lesson to be taken away?

Sherman: With Helltown, I wanted to examine the culture of toxic masculinity and systemic misogyny that dominated the time, and continues to shape our attitudes toward violence, especially against women, today.

The killings on Cape Cod in 1969 were the most vicious serial murders since Jack the Ripper. It wasn’t until I spent time with one of the key investigators in the case, retired Massachusetts state trooper Tom Gunnery, that I fully understood the horror and depravity inflicted on at least four young women. The victims [Sydney Monzon, Susan Perry, Patricia Walsh, and Mary Anne Wysocki] were shot, stabbed, dismembered, and buried in shallow graves, all because they placed their trust in a polite, outwardly harmless young man. I pored over more than 2,000 pages of police reports, trial testimony, audiotaped interviews, and most disturbingly, the crime scene and autopsy photos. I’ve never seen anything more outrageously brutal in my nearly 30 years as an investigative journalist.

Bostonia: What made you want to incorporate the Vonnegut-Mailer rivalry into what was already a pretty riveting crime story?

Sherman: I was looking for a unique way into this dark story. A procedural book about the case had been published decades ago, and I did not want to merely cover old ground. As a writer, there is no challenge in that.

It was a very rare thing to have two literary icons reporting on a serial murder case in their own backyard. In early 1969, Vonnegut had yet to become a literary star, while Mailer had been a best-selling writer since his debut novel, The Naked and the Dead, in 1948. I mined the tension in their relationship, and more importantly, the darkness within themselves.

Vonnegut was struggling inwardly with the horrors that he had experienced as a prisoner of war during the Allied firebombing of Dresden, Germany, in 1945, which he fictionalized in Slaughterhouse Five. Mailer had been walking the razor’s edge since he nearly killed his second wife, Adele, with a pen knife in 1960. In 1969, both writers are confronted with ultimate evil and become obsessed with the ritualistic killings in their community and are drawn to the killer himself.

Bostonia: You carefully situate the story in the context of the late ’60s. It seems as if you consider the era a character?

1969 is a major character in my book. It was a year of reckoning. The “Summer of Love” [in 1967] is a distant memory and overshadowed by the assassinations of Robert Kennedy and MLK [both 1968], a raging war in Vietnam, and the bloody violence of the 1968 Democratic National Convention. Woven into the historical landscape of Helltown, we have Nixon’s inauguration, Chappaquiddick, the moon landing, and the Manson murders. My characters have both direct and tangential connections with all of these major events.

I look at 2022 the same way that I look at 1969. There has been a huge cultural and political shift in our country. We are living in a dangerous time, where darkness is overshadowing light.

Bostonia: What draws you to crime reporting, which would be so grim for most other writers?

In my work, the victims of these horrible crimes are fully dimensional people with hopes and dreams. I recently brought my true crime stories, as retold in my podcast Saints, Sinners & Serial Killers with my cohost Dave Wedge, to the stage at Boston’s Wilbur Theatre, with a cast of 20 local actors. Our show personalized the cases of the Boston Strangler, Whitey Bulger, and the assassination of John Lennon and made them vividly real for the audience.

Bostonia: Your subtitle calls this story “untold,” though it’s been the subject of other books and press coverage at the time, as you note. What was untold about Costa’s story?

For the first time, we are seeing the crimes through the eyes of the serial killer himself. I got access to an unpublished manuscript that Tony Costa had written before he committed suicide at Walpole State Prison in 1974. In it, he describes the murders in vivid detail through an alter ego that he had created for himself. Since Costa was the only person in these macabre events to live to tell the tale, it allows us to take some of the guesswork out of what actually happened in the Cape Cod woods in the cold winter of 1969.