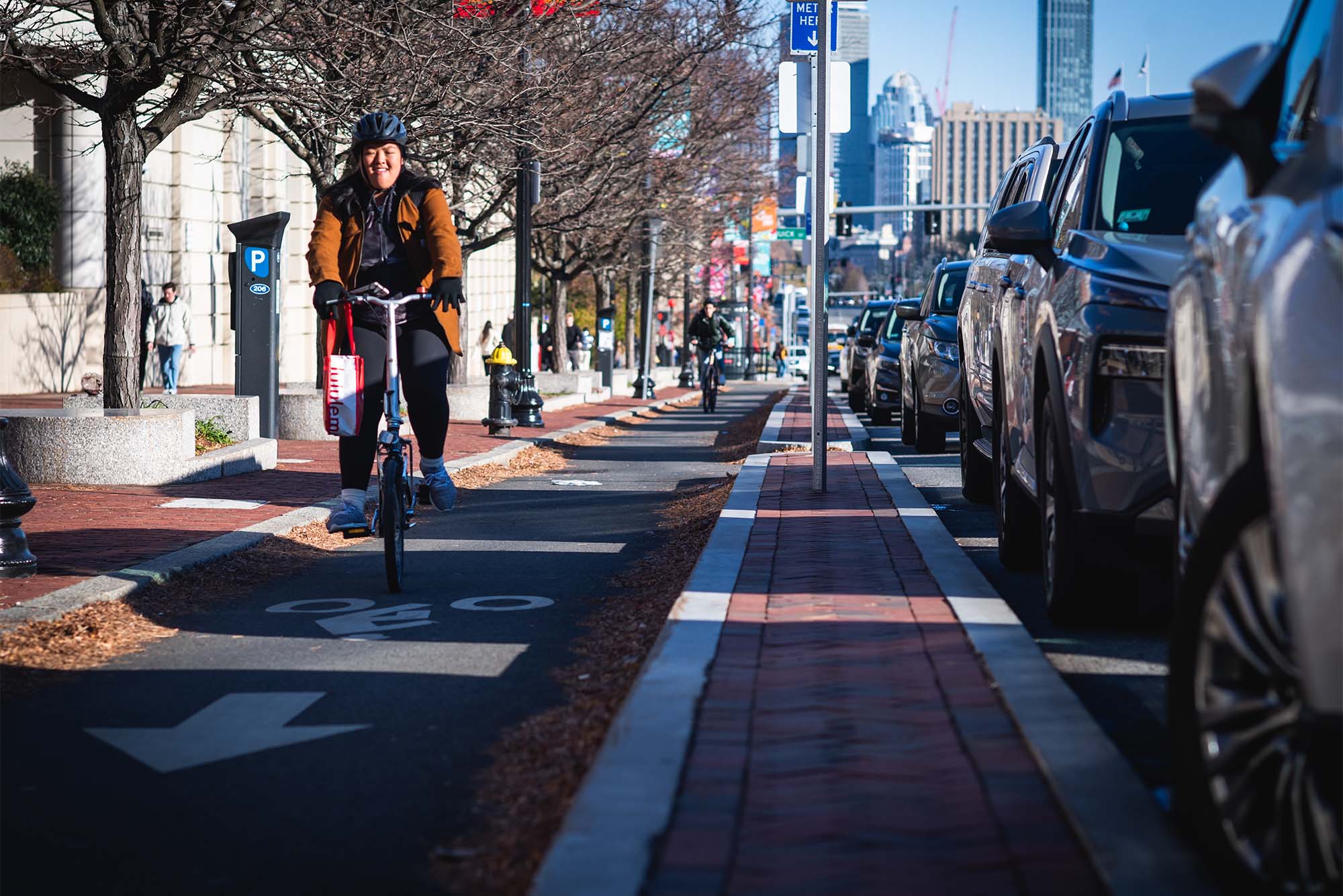 Whether it’s for some brisk exercise or to avoid Boston traffic, commuting to Boston University’s campuses by bike is a great option any time of year. To stay safe, though—and to keep others around you safe—it’s important to have the right equipment and know the rules of the road.

We spoke with two BU experts—Galen Mook (UNI’09), executive director of MassBike, a nonprofit bicycle safety and policy advocacy group, and Carl Larson, BU assistant director of Transportation Demand Management and Planning, about what you need to know before you get in the saddle.

“My big three must-haves for biking are: helmet, lights, and a lock,” says Mook.

“You have to get a good helmet. You’re investing in your brain by coming to Boston University, and you need to protect that investment,” he says.

Front and rear lights—white for the front and red for the back—help cyclists remain visible at night. And with sunset getting earlier and earlier this time of the year, these are a must-have. They’re also required by law in the city: when riding at night, cyclists must have a white front light that’s visible from 500 feet away and a red light or reflector on the back of their bikes.

Here’s some great news: BU Parking & Transportation Services (P&TS) offers free helmets and bike lights (and bells!) to anyone who needs them, says Larson, a bike commuter himself. They are available at the P&TS office, 1019 Commonwealth Ave., during business hours.

Finally, a lock. Mook recommends a U Lock (also called a D Lock), to secure your bike to a rack when you’re not using it. A bonus tip: try threading the lock around your bike frame and through the front wheel, as well as around the bike rack. This prevents would-be thieves from making off with your easy-to-remove front wheel.

With more than 2,400 bike parking spaces scattered throughout BU’s campuses, there’s no shortage of parking, either. Most bike storage is outside, but some spaces are available indoors, in secure bike rooms. A list of locations is available online, where cyclists can also request access to one of these rooms. Some dorm buildings—including StuVi 2, Kilachand Honors College, Myles Standish Hall, Danielsen Hall, and various brownstone buildings—also have bike rooms available for residents.

Be sure to register your bicycle with P&TS, as well. The free online service can help BUPD officers track down the owners of stolen bicycles and also allows P&TS staff to get in touch with cyclists when there are projects or activities that could impede bike commuting or parking.

Mook and Larson suggest investing in a good water bottle and some cargo storage, in the form of a rack or panniers, too.

“Biking with a backpack actually isn’t all that fun,” Mook says, “but you don’t realize that until you have another way to carry things around with you on your bike. Having a basket or panniers, or even a milk crate on your bike, means that you can carry your books, an extra coat, or a 30-rack of seltzers, no problem.”

Finally, having the right equipment also means having the proper tools to take care of your bike and fix minor issues as they arise. Mook describes this as “the ABCs of bike maintenance.” That is: air, brakes, and chain.

“Everyone who rides a bike should know how to pump their own tires, check their own brakes, and clean their own chain,” he says.

BU offers more than a dozen tire pumps and repair stations throughout its campuses, and their locations can be found online. For new riders, Larson runs a one-credit “Urban Bicycling” course through FitRec each fall, and other classes are available throughout the year.

In addition, CommonWheels, a do-it-yourself community bike organization that Mook cofounded nearly a decade ago, offers events, classes, clinics, and group rides throughout the year. The nonprofit is in Allston, close to BU’s Charles River Campus.

Rules of the road

“Bikers are responsible for their own safety—you can’t rely on a driver, another cyclist, or even a pedestrian to follow the rules, or even know them,” Mook says.

While many cycling advocacy organizations, including the Boston Cyclists Union and Mook’s MassBike, work to increase driver awareness, bicycle accidents continue to plague commuters. According to Vision Zero, a project by the Boston Transportation Department to reduce fatal and serious traffic accidents in the city, there were more than 200 cycling accidents reported between January and October 2022, the most recent month for which complete data were available.

Accidents happen. But following Boston’s bike laws and being familiar with the city’s bicycle infrastructure can help cyclists stay safer. Boston mandates that cyclists follow all traffic laws and regulations, including stopping at stop signs and following all traffic lights unless signs are posted otherwise; ride in the same direction as traffic unless there are street signs indicating otherwise; and use hand signals to indicate stops or turns unless you need both hands to operate your bike safely.

The city offers a vast—and growing—network of bike lanes, and these are usually the best bet for cyclists. Where there aren’t bike lanes, cyclists can use the road or hop onto sidewalks if it’s the safest option.

Protected bike lanes, such as those on Commonwealth Avenue, shield cyclists from open car doors and turning traffic (usually). “But they’re not an invincibility cloak,” Mook warns. Inattentive drivers may still turn through bike lanes, something cyclists should be prepared for, he says.

In more heavily trafficked areas, such as Kenmore Square, cyclists should also keep an eye out for parked cars whose drivers may throw open their doors without checking first for bikers.

“New riders especially tend to ride really close to parked cars,” Larson says. “This puts people in danger of being ‘doored,’ or smashing into an open car door. It’s a little counterintuitive at first, but it’s usually safer to ride further into a lane than to ride right up against parked cars.”

The MBTA Green Line presents another safety challenge for Boston cyclists. The trolley tracks running through the road are thin enough not to be particularly noticeable in a car, but they’re wide enough to get a bike tire stuck in. When crossing Green Line tracks—or bridge seams, such as those across Commonwealth Avenue near the BU Bridge—it’s critical to cross “as close to perpendicular as possible,” Larson says.

“When the tracks are wet, they can also be extra slippery, something we tell new riders, too,” he adds.

Larson and Mook say that the most important thing for any urban cyclist is to keep your wits about you.

“This is a dynamic environment, especially in places where you have car traffic, pedestrians, roller bladers, skateboarders, people on scooters, and cyclists,” Mook says. “The conditions will be changing all the time, and my advice is to stay alert, keep your eyes open, and make the safest choices possible.”

There are 5 comments on Commuting to Campus by Bike? BU Pros Offer Tips for Staying Safe