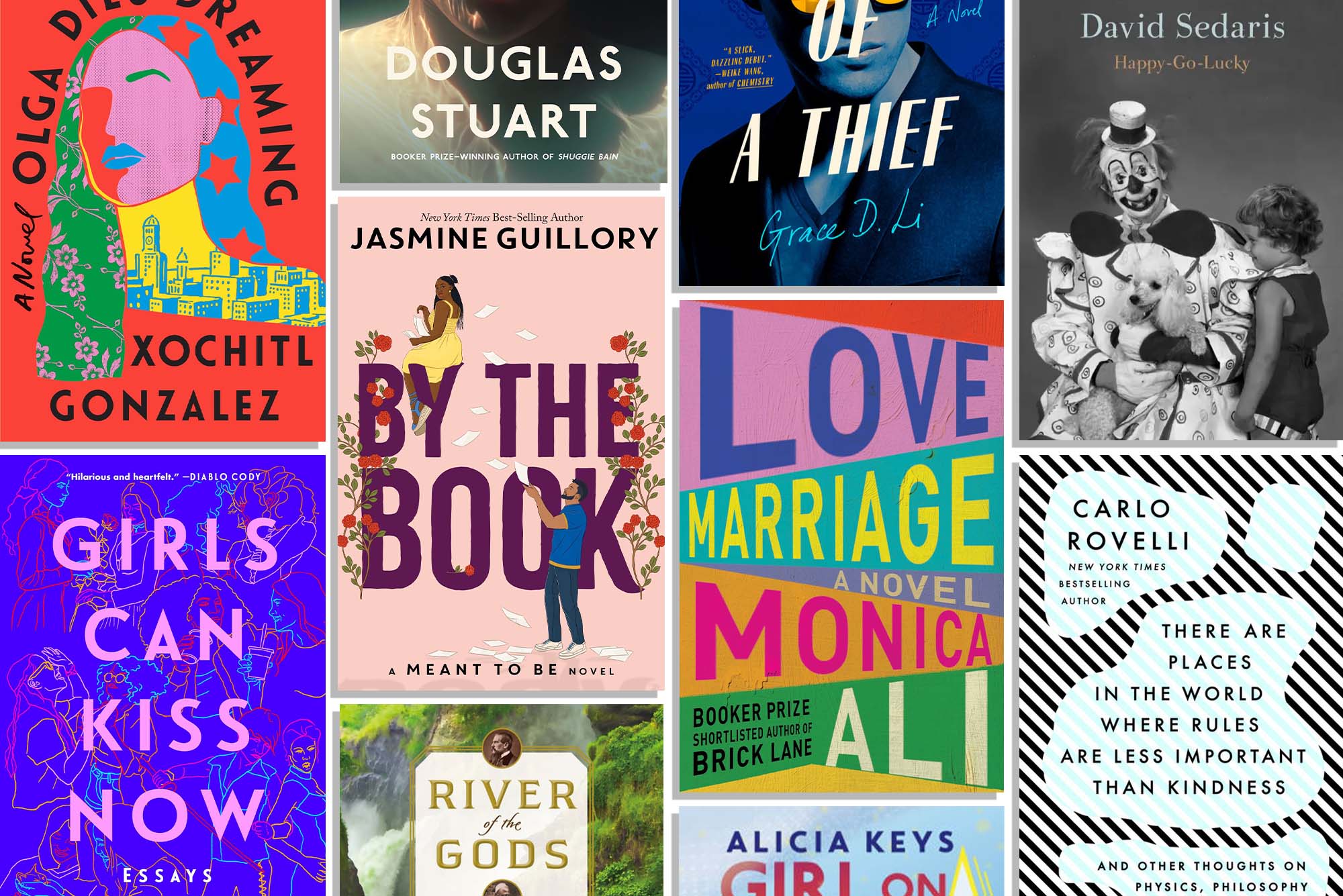 15 Great Summer Reads Sure to Keep You Turning the Pages

Our list of fiction and nonfiction has something for everyone

Today is the official start of summer (also known as the time to relax, sit outside with your feet up, and read), so we’ve put together a list of 15 great summer reads, a mix of fiction and nonfiction, designed to appeal to readers of all stripes. We’ve got new books, classics, romance, sci-fi, a graphic novel, and more. So whether you’re packing up for a camping trip, a day at the beach, or an afternoon in your backyard hammock, check out our suggestions.

Have a recommendation for a great summer read? Let us know in the Comments section below.

After a 10-year hiatus, Monica Ali, the author of the 2003 literary hit Brick Lane, is back with a new novel. Love Marriage revisits Brick Lane’s themes of cultural fusion and fission within London’s South Asian community, this time focusing not on immigrant parents, but their young and restless children. Yasmin, a 26-year-old Indian woman engaged to Joe, who is British, struggles to reconcile their families’ differences as the wedding nears, especially once she learns that something she’s always believed is a lie.

Masters of the hard-boiled detective story, like Raymond Chandler and Dashiell Hammett, aren’t exactly known for open-mindedness, which is why the genre hasn’t featured a lot of queer protagonists to date. But in Richard Stevenson’s mysteries, we glimpse a different postwar (WWII) America—one suffused with an underground gay culture that’s threatened by “polite society” and the powers that be. In Knock Off the Hat, Stevenson’s private eye, Clifford Waterman, walks the perilous line between the two.

In this debut novel, siblings Olga and Pedro “Prieto” Acavedo, upwardly mobile Latinos living in New York, are at once enmeshed in, and estranged from, their community. Neither Olga, a wedding planner, nor Prieto, a congressman, has anything in common with their mother, Blanca, who left when they were young to live a life of militant radicalism. But as Hurricane Maria blows through the family’s Puerto Rico homeland, Blanca blows back into the siblings’ posh lives. Author Xochitl Gonzalez fuses the personal and political as seen through a natural disaster.

Grace D. Li’s Portrait of a Thief takes our voyeuristic relationship with grifters and our fascination with China and combines them in a timely heist story. When Harvard senior Will Chen stumbles upon the opportunity to reclaim five stolen Chinese sculptures from the National Museum of Asian Art, he quickly assembles a crack team for the job. Can the young Chinese Americans pull it off and earn $50 million for bringing the artifacts home, or will they lose everything they’ve worked for and dreamed of? In Portrait of a Thief, Li pens an anti-colonial crime novel that’s also a perfect book club pick.

Just when it seems like Alicia Keys is at the top of her game, she goes and adds another hyphen to her résumé. Girl on Fire marks the multiple Grammy winner–best-selling author’s foray into graphic novels, with the help of coauthor Andrew Weiner and illustrator Brittney Williams. The YA story centers around Lolo Wright, a 14-year-old New Yorker who accidentally discovers that she possesses telekinetic powers. Her abilities catch the attention of characters both good and sinister in this coming-of-age story that reimagines the streets of New York, where Keys herself grew up.

The latest installment in Jasmine Guillory’s Disney-inspired Meant to Be series is a modern retelling of Disney’s Beauty and the Beast, starring an appropriately book-obsessed heroine. At 25, still living at home and feeling isolated as the only Black employee at her publishing house, Izzy decides to challenge herself by delivering a long-overdue manuscript to her boss. When she first approaches  Beau Towers, a mercurial, high-profile author with a chip on his shoulder, the two bristle at each other, but like in the beloved 1991 movie, their relationship begins to thaw. Will Izzy be able to help Beau finish his book before deadline, and will something special grow between them in the meantime? You’ll have to read it to find out.

Douglas Stuart’s outstanding debut novel, Shuggie Bain, a coming-of-age story about a young gay man in 1980s Glasgow, earned international recognition and the 2020 Booker Prize. With the publication of Young Mungo—also a coming-of-age story, also featuring a gay protagonist, and also set in Glasgow—it’s possible that lightning can strike twice. Young Mungo, more explicitly a love story than Stuart’s first book, tells the tale of Mungo, a Protestant, and James, a Catholic, whose youthful friendship begins to turn, against all odds, into something more.

A world-renowned physicist in the free-spirited tradition of Richard Feynman, Carlo Rovelli spends his days not just pondering loop quantum gravity (look it up), but penning editorial pieces for newspapers across the world. This collection of nearly 50 essays reveals Rovelli’s brilliant, restless mind as he explores topics ranging from Einstein’s errors and Nabokov’s lepidopterology to Dante’s cosmology and the meaning of atheism, making the case that modern science owes its advancement to the passions of the humanities.

About 6,000 miles away and more than five decades after Lewis and Clark’s search for the Northwest Passage, British explorers Richard Burton and John Hanning Speke began their search for the source of the Nile River. River of the Gods recounts how the two men’s temperaments clashed nearly as severely as their backgrounds. Their successful discovery was followed by a publicity campaign marred with accusations, scandal, and a return to Africa. While Burton and Speke take center stage, author Candice Millard also brings to vivid life the story of Sidi Mubarak Bombay, a formerly enslaved man and loyal friend, who accompanied the two men on their quest.

For better or for worse, we live in an age where all your favorite (and least favorite) Twitter personalities are getting book deals. Some will undoubtedly be terrible, and some might just be worth a shot. Jill Gutowitz’s first collection of essays is primed for the latter category, having generated lots of buzz, from Vogue to Shondaland. Girls Can Kiss Now is a wry collection of personal observations, cringe-y memories, and reflections on a life saturated in TV, movies, and music. Here, Gutowitz has done more than simply translate her Twitter career into print: she may just have penned the definitive pop-culture lesbian manifesto.

Simu Liu, Marvel Studios’ first Asian superhero lead (Shang-Chi and the Legend of the Ten Rings) has an inspiring story of his own. In this memoir, he recounts  his parents’ emigration from China to Canada, sending for him when he was four. He spent most of his childhood emotionally isolated from his parents, until after years of straight As and high achievement, he began to stray from the path laid out for him. What follows is a bumpy journey to Hollywood success and a moving reconciliation with both his family and his past.

Exploring the fundamental question of gender, Rhea Ewing’s Fine is a collection of illustrated dialogues based on a decade’s worth of interviews with approximately 50 individuals that began in 2012. Now, a decade later, this graphic anthology trains its gaze on young and old, straight and gay, gender-conforming and nonconforming alike, uncovering in the process the intricate ways that human beings differ from one another and the unlikely—and sometimes heart-wrenching—ways that we’re all the same.

Imagine the scandal caused by biotech entrepreneur Elizabeth Holmes and her fake blood-testing start-up Theranos, but swap the blood tests for fentanyl and a product few were willing to buy with one they couldn’t stop buying. Working up close with insiders of Insys Therapeutics, a start-up founded by fentanyl manufacturer John Kapoor, author Evan Hughes recounts how a culture of “sell-sell-sell” turned into a scandal, a highly publicized trial, and eventually, a pharmaceutical cautionary tale.

While doctors were intubating COVID-19 patients in ICUs across New York City during the height of the pandemic, journalist Marie Brenner was there. Granted unprecedented access to the New York–Presbyterian hospital system over 18 months, and drawing on more than 200 interviews, Brenner, a writer-at-large for Vanity Fair, tells the story of the dedication of one hospital system’s personnel as the pandemic’s death toll surged. In The Desperate Hours, Brenner takes us inside cordoned off operating rooms, makeshift clinics and mobile units, and executive suites to bring us the stories of a team of heroic doctors, nurses, and hospital staff bent on saving lives.

Has anyone else wondered what best-selling author and humorist David Sedaris has been up to since the COVID-19 pandemic hit? In this, his 13th book, Sedaris tackles the sea changes the country has endured since March 2020. On the road again, he discovers the poignancy, wit, and endurance of Pandemic America, and the reader discovers once again, and with pleasure, that it’s David’s world and we’re all just living in it.

15 Great Summer Reads Sure to Keep You Turning the Pages