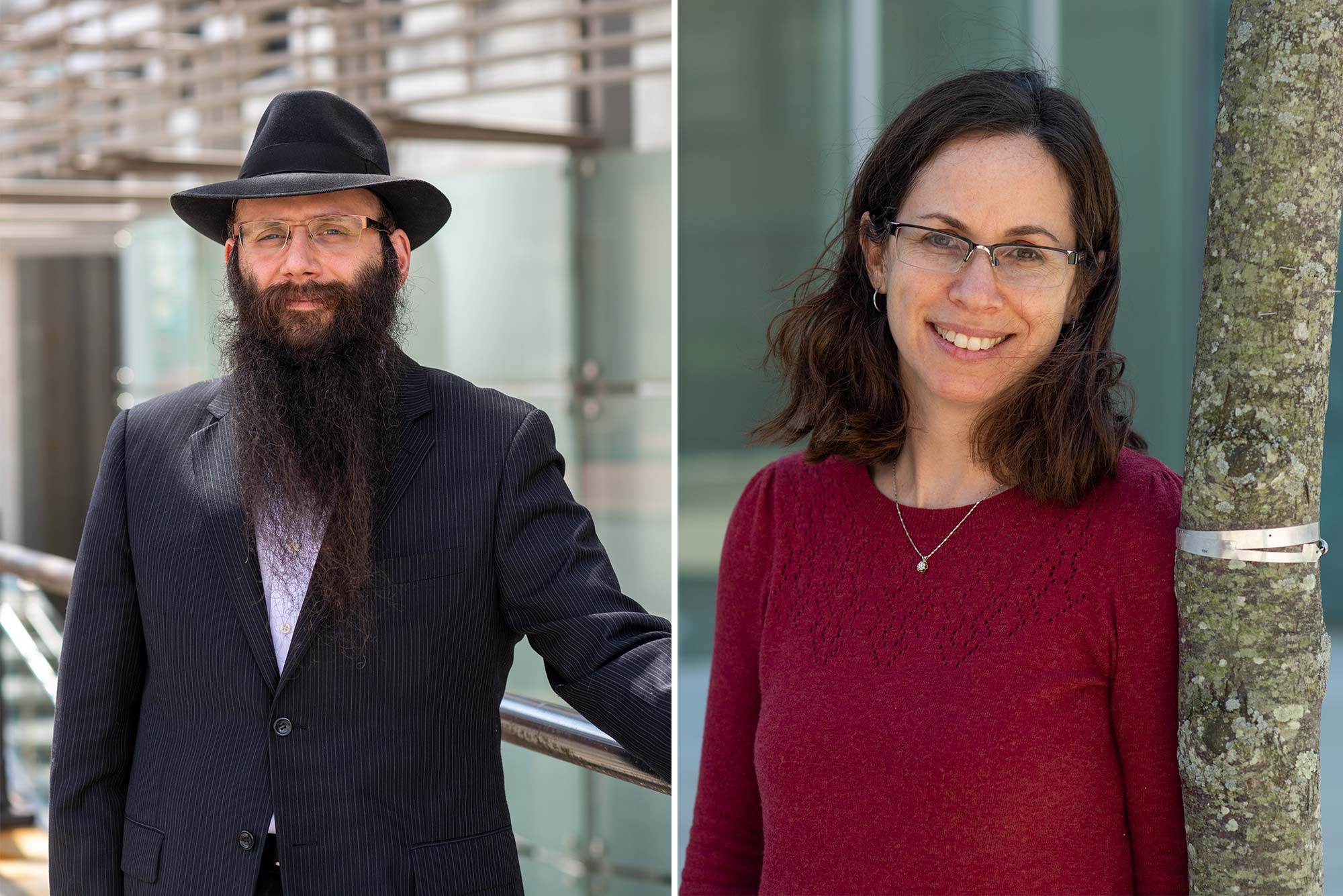 Binyoman Abrams, a CAS master lecturer in chemistry (left), is the recipient of this year’s Gitner Family Award, and Pamela Templer, a CAS professor of biology, is the winner of this year’s Provost’s Scholar-Teacher Award.

In 2010, 10 years before the COVID-19 pandemic gave many faculty members only a few days to master new teaching technologies, Binyomin Abrams was producing dozens of short videos and seamlessly integrating them into the coursework of first-year chemistry courses. Today, more than 80 videos, many of them tied to courses and webinars, help Abrams’ students learn fundamental concepts in chemistry. His videos, as well as his innovative approach to helping remote students attend labs synchronously, are among the reasons that the College of Arts & Sciences master lecturer in chemistry and director of general chemistry has been awarded the Gerald and Deanne Gitner Family Award for Innovation in Teaching with Technology. The annual award provides $10,000 to the faculty member who best exemplifies innovation in teaching by using technology.

Abrams is no stranger to University awards. In 2010, he won the Templeton Prize for Excellence in Student Advising and in 2015 a Metcalf Award for Excellence in Teaching. Writing in support of Abrams’ nomination for the award, Karen Allen, a CAS professor and chair of chemistry, says the popular teacher “constantly looks for ways to better teach introductory chemical concepts,” pointing to Abrams’ innovative OrgoPrep 2.0 program that supports students as they move into organic chemistry. The project, which Abrams designed along with his undergraduate research students, uses question-embedded videos (QEVs) delivered asynchronously through a blackboard plug-in called Edpuzzle (which embeds active-learning components in the videos) and synchronous remote webinars led by peer mentors. Students who completed the six-week OrgoPrep summer program—which is offered in partnership with the Educational Research Center—reported being well-prepared for the fall semester, and significantly less anxious about organic chemistry.

An examination of the program’s effectiveness found that students who took OrgoPrep were up to four times less likely to have a negative outcome (dropping the course or getting a D or F in organic chemistry) and almost two times more likely to earn an A in the course compared to peers who did not take the program.

Abrams says that when he started making videos he simply thought it might be a good way to help give students the content they need. “Only later did I learn that videos can have a very powerful effect beyond written text,” he says. “Video uses different information streams. It involves both visual and audio processing, and when the two streams build on one another it can be very effective. Done well, educational videos can reduce cognitive load and support knowledge transfer.”

After the COVID-19 pandemic hit Boston, Abrams was the focus of a popular BU Today article about the abrupt transition to remote learning. Now, one year later, his insight and approach have clearly served his students well. Despite his facility with technology, Abrams is convinced that last spring, when the switch to remote learning ratcheted up the importance of teaching technologies, it also revealed the need for face-to-face contact.

“It was spring break and no one knew what was going to happen,” he recalls. “All we knew was that people were dying and everyone was scared, and my response was OK, we’re going to stay safe, we’re going to get through this, but we’re also going to have to try harder—this is not going to be easy. I was on campus yesterday, pretty much for the first time in a year, and I interacted face-to-face with some students who I had only seen on Zoom previously. I thought, this is the way it should be, but in the absence of this we have had to do the best we could do. I’m a Hasidic Jewish person, and one of the most poignant teachings that guides me is that the only way to dispel darkness is to add more light. If you feel a sense of lacking, you don’t dwell on the lacking. You find a way to add more and to do more. I think that’s what we’ve all tried to do.

“I’m grateful to my students for giving me the opportunity to find new ways to teach and support them,” he says. “One of the things that’s so amazing about teaching at Boston University is that our students have a real desire to learn. They have a real thirst for knowledge, and if we can find new ways to help them, they will jump at it.”

Pamela Templer’s method for researching and teaching the ways that human activities affect natural ecosystems is a kind of ecosystem of its own, one where hands-on, in-the-field research and rigorous scholarship work together to enhance both endeavors. The CAS professor of biology has taken her students on six-week digs in New Hampshire’s Hubbard Brook Experimental Forest, where they buried two and a half miles of heating cable four inches beneath the forest floor, part of an effort to assess the impact of climate change on forest ecosystems. At Harvard Forest in Petersham, Mass., Templer’s students have measured the effects of a smaller winter snowpack on tree health and microbial life in soil samples.

The students love it. And they love Templer. One describes the professor-researcher as “a beacon of hope through this tough semester of Zoom classes.” Another says “people like Professor Templer are the reason I love science.” Further appreciation for Templer’s teaching is reflected in the dozens of honors and awards she’s received, including a 2015 Metcalf Award for Excellence in Teaching. Templer has now added yet another honor to her CV: she has been named the 2021 Provost’s Scholar-Teacher of the Year, an award that recognizes outstanding scholars who excel as teachers inside and outside the classroom. The annual award comes with a stipend of $5,000.

Kimberly McCall, a CAS professor and chair of biology, describes Templer in her nomination recommendation as “one of the most inspirational, talented, and versatile teachers in the Department of Biology.” McCall credits Templer with developing the perennially popular Biology of Global Change course, which covers the ecological impacts of human activity on terrestrial and aquatic ecosystems.

“Pam Templer,” she writes, “is a masterful lecturer who is teaching BU students important, current, and impactful science. She has engaged many students, and she has made a significant impact on the lives of many of our students.”

Templer, a biogeochemist, is also the director of the Biogeoscience PhD Program, a rigorous interdisciplinary training program, and the lead PI on a current NSF Research Training Grant that brought in $3 million for interdisciplinary graduate training in the URBAN Program. She is director of the program, where students are trained in biogeoscience and environmental health to work with cities to tackle urban environmental challenges.

Templer has long held the conviction that students become inspired and energized when they learn through hands-on, interdisciplinary, student-directed fun projects that address real-world problems. She applies that philosophy for high school students conducting research in her lab, students in her courses, PhD students working on chapters of their dissertations, and members of BU’s graduate programs working to broaden participation in STEM fields (science, technology, engineering, and mathematics).

“My enjoyment of, and passion for, teaching have only grown over time,” she says. “I find it a thrill to work with budding scientists. It’s a joy to help them discover the wonders of the world and work as interdisciplinary teams to address real-world environmental problems and to support them in becoming leaders and scholars.”

Among Templer’s many awards are a highly competitive NSF CAREER grant in 2011 and a National Science Foundation Research Traineeship grant in 2017. She was elected Ecological Society of America vice president for education and human resources in 2018 and a fellow of the Ecological Society of America in 2019. She has also served on the Scientific Coordinating Committee for Hubbard Brook Experimental Forest and on the Massachusetts Executive Office of Energy and Environmental Affairs Steering Committee for the MA Decarbonization Roadmap, and was a Bullard Fellow and Sustainability Science Fellow at Harvard University during her last sabbatical. Templer’s research group has over 90 scientific publications in high-profile scientific journals, including Nature, Proceedings of the National Academy of Sciences, and Nature Ecology and Evolution.

There are 2 comments on Two CAS Faculty Honored for Teaching