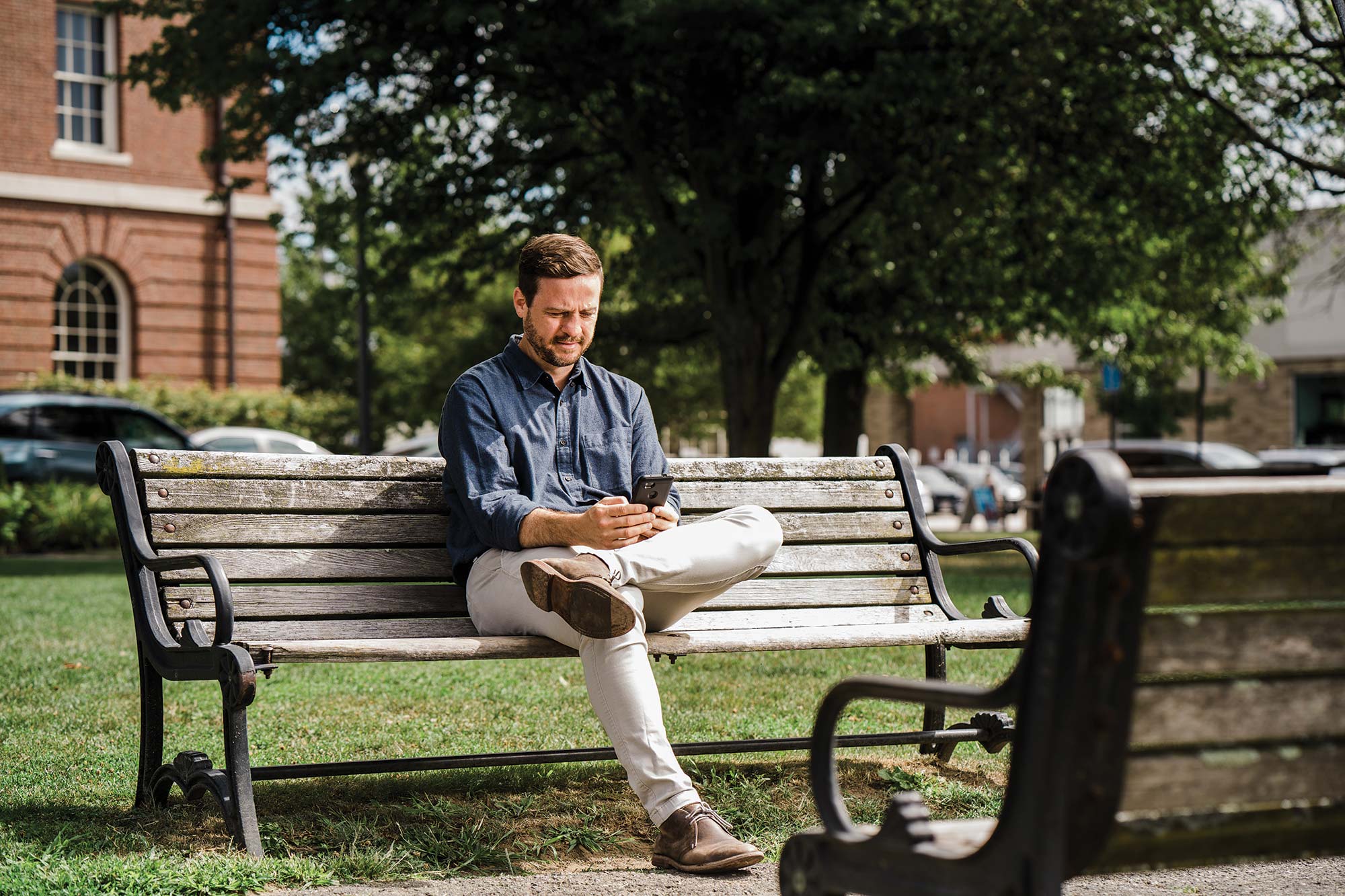 Daniel Fulford plans to use millions of rows of data, collected via smartphone app, to better understand loneliness. Photo by Chris McIntosh

Americans are lonely. Even well before COVID-19 left people stuck at home and cut off from friends, nearly half of adults reported feeling socially isolated, according to a 2018 survey by Cigna and Ipsos. Younger adults were the loneliest of all. But why are some people more prone to loneliness, while others aren’t?

Boston University clinical psychologist Daniel Fulford is trying to figure out why some people become chronically lonely and to help them reengage with society. And a smartphone app that passively monitors activity and social behavior is going to help him do that.

“The subjective experience of aloneness is not only associated with psychological or emotional distress, but poses a risk for a variety of detrimental health outcomes, even including early mortality,” says Fulford, BU Sargent College of Health and Rehabilitation Sciences assistant professor of occupational therapy and director of the Approach Motivation & Participation Lab. “Loneliness is thought to serve as an adaptive signal that motivates us to seek social contact, so it can serve a beneficial purpose. But when chronic, there is mounting evidence that these poor health outcomes emerge.”

In fall 2020, Fulford kicked off a four-year-long study researching social connections in 100 people—some lonely, some not. “One of the key questions is to understand within people how the loneliness and isolation operate,” says Fulford. “It’s not just a group-level understanding of these key constructs. You really have to dive in. We all experience isolation and loneliness differently.”

To glean new insights, he is employing the help of smartphones to track loneliness and provide digital interventions that prompt people to join social activities. Over the four years, study participants will use an app called Beiwe, developed by Jukka-Pekka Onnela, a Harvard University associate professor of biostatistics and a partner on the project. As participants go about their daily lives, their phones will monitor them, tracking their physical movements, calls, texts, and social media usage.

“It’s a background app designed to gather a lot of what we call passive metrics,” says Fulford. Rather than constantly interrupting people with surveys about their feelings, the app will simply watch and listen. “That’s actually a central question of this grant: We want to see if we can use the cell phone to gather data in a more passive way, to gather data in the person’s environment—geolocation, conversations—and see how those might be indicative of certain emotional states or loneliness.”

Fulford says the app pulls in a “ridiculous amount of data.” In a pilot study, which only grabbed subjects’ GPS information for one week, the team gathered about one million rows of data—per participant.

The challenge for Fulford will be to not just interpret those stats, but make meaningful connections within all of that data. It’s why his lab includes graduate researchers in computer science, engineering, and behavioral neuroscience, as well as those focusing on clinical psychology and psychosocial rehabilitation. Another key collaborator on the project is Carlos Busso, a University of Texas at Dallas professor of electrical engineering.

“His work has been in vocal processing of audio data,” says Fulford. “We’ll be using the [smartphone] microphones to gather rich data around vocal characteristics. We have to meaningfully extract those data and summarize them in ways that tell us something about people’s social interactions and connections.”

In using the app, Fulford hopes to work around a big gap in scientists’ understanding of mental health. For most studies on well-being, subjects complete a survey or interview that relies on memory and is shaped by how they feel in that moment. It’s like trying to review a feature-length movie from a single still.

“In the psychological realm, a lot of what we know about human behavior is based on questionnaires, self-reports, sometimes behavioral tasks,” says Fulford, who holds a joint appointment in BU’s department of psychological and brain sciences.

By using smartphones to monitor someone throughout the day, across weeks and months—an approach called ecological momentary assessment or the experience sampling method—Fulford can build a more nuanced picture of how people interact with the world and their feelings as they do.

“We can really understand not only human behavior in the context of their daily lives, but also fluctuations or changes in states of behavior,” he says. “That’s something we can’t get very good data on if we’re just measuring things at one point in time.”

His approach also provides a counterbalance to our fickle memory. Most people struggle to report accurately how they were feeling last week, let alone a month or six months ago.

For those with a severe mental illness, it can be even more of a challenge. “There are cognitive impairments or limitations that really could influence someone’s recording of their experiences over a period of time,” says Fulford. Although his latest study began in the general population, the final phase will be to apply any lessons to people with a serious mental illness. They are, on average, more isolated and more lonely, he says.

In past research, Fulford has found people with schizophrenia are less motivated to participate in some social activities. Asked to fill in a onetime report on activities they enjoy doing, they struggle to list anything. That lack of interest often translates into a lack of participation. But when Fulford has studied people with schizophrenia using the experience sampling method, he’s found something surprising: they have a good time during social activities. Maybe even a better time than others.

So why don’t they want to do it again? Fulford speculates the lack of social motivation might be due to impaired cognitive processes—the memories refuse to resurface. Or it could be tied to retrospective social anxiety: a fear they said or did the wrong thing. The same might apply to people with bipolar disorder or depression. Fulford’s team has built apps that attempt to bridge the gap between reality and memory, sending people personalized goals and reminding them of past successes. He says an app that motivates people to break out of a period of isolation is a natural extension of his latest study, too. The project team includes a practicing clinical psychologist, David E. Gard, a professor at San Francisco State University.

“If we can reliably predict when people transition from a state of social connection to isolation, to feeling disconnected or lonely, we can use the phones to feed information back to them,” he says. “We can provide steps and ways to address barriers to social goal attainment.”

Not that he expects the app to supplant office visits for people who need help. For a start, there’s a big digital divide when it comes to people with a severe mental illness: they’re less likely to have a reliable internet connection or own smartphones.

“I never think of the apps as tools that would replace face-to-face care, because I don’t think they would be effective,” says Fulford. “We’re trying to use them as ways to connect the client to the techniques and skills they learn in face-to-face therapy, but apply them in their daily lives.”

This research is funded by the National Institute of Mental Health as part of the Smart and Connected Health initiative, a joint project with the National Science Foundation. Fulford has also applied for additional funding to assess the long-term impacts of COVID social distancing measures on loneliness.

“Tracking Loneliness” was originally published in Inside Sargent.

Why Are Some People More Lonely Than Others? Smartphone Data Could Reveal Clues
0
share this