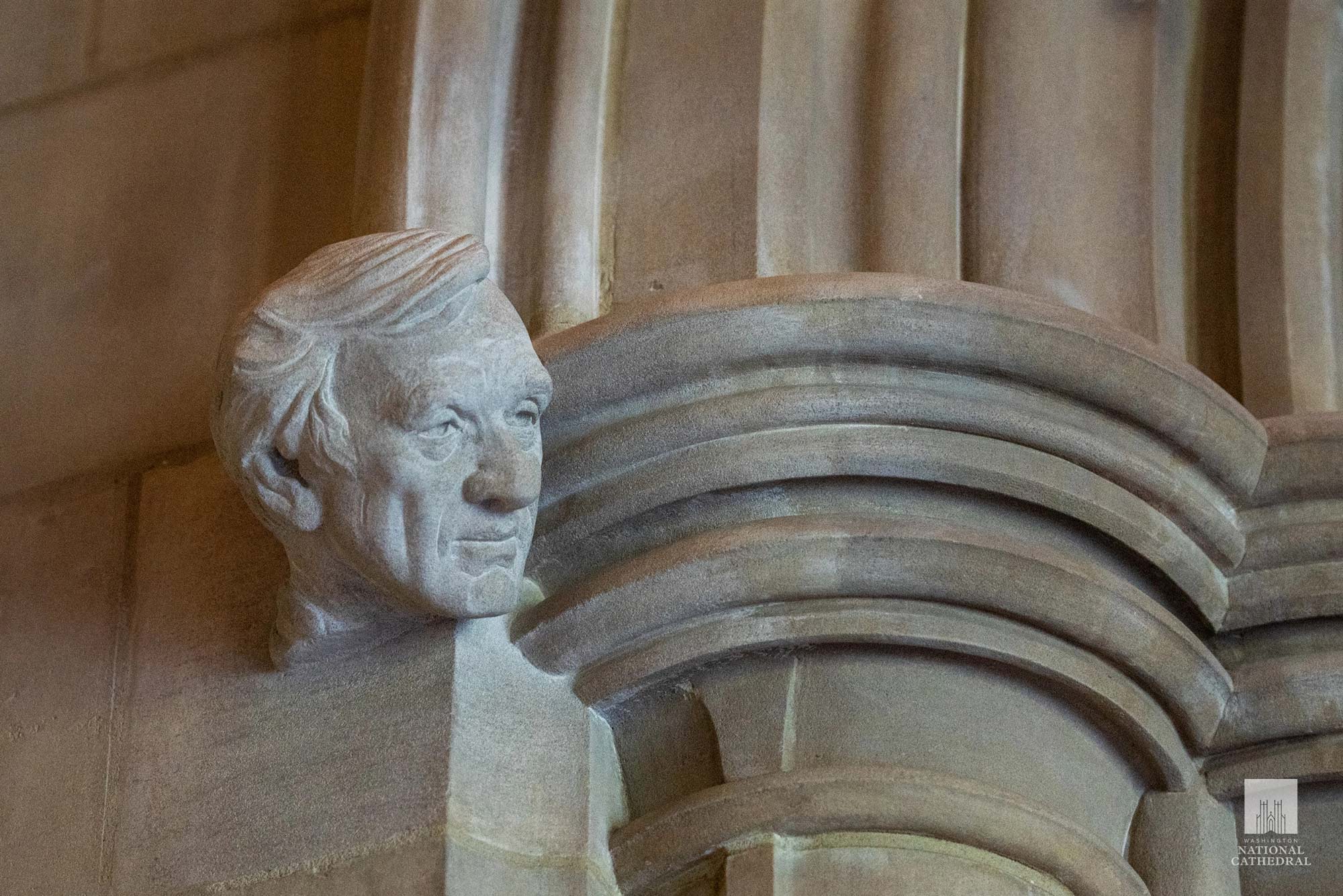 The Nazis couldn’t kill Elie Wiesel at Auschwitz or Buchenwald. Having survived childhood imprisonment in the death camps, he made sure their horrors would be remembered in many of his 57 books (notably the memoir Night) and his almost 40 years of teaching at BU.

Some five years after his death at 87, Wiesel (Hon.’74), who chronicled the worst of humanity, has joined some of the best. His soulful-eyed face, in stone, now gazes from a corner 10 feet up in an alcove of human rights heroes at Washington National Cathedral.

Wiesel was a College of Arts & Sciences professor of philosophy and religion, and one of only two professors to hold the University’s Andew W. Mellon Professorship in the Humanities (Ibram Kendi is the other). Night’s 100-plus pages searingly detail his Holocaust nightmare, from the guilt he experienced over resenting his father’s growing incapacitation to the latter’s fatal beating as his young son cowered in a bunk above.

“His is a powerful voice against the danger of indifference,” says the Very Rev. Randolph Marshall Hollerith, dean of the Cathedral, in explaining the decision to install Wiesel’s likeness. “Whenever we overlook the suffering of others because it’s too hard or inconvenient, he reminds us that we not only deny their humanity, but our own. His life is a testament to the power and importance of vigilance to protect any and all threats to human dignity.”

“We are immensely proud,” says Michael Zank, director of BU’s Elie Wiesel Center for Jewish Studies and a CAS professor of religion. “We are also moved by the fact that this is happening now, when acts of antisemitism are on the rise both in the United States and abroad. That Wiesel is placed in the company of Rosa Parks, Oscar Romero, and Mother Teresa means that he is recognized as a voice of conscience.

“This is especially important at a time when the struggle for human rights inspires young people more than ever before.”

“Anti-Semitism is one of the world’s oldest and most insidious evils, and Professor Wiesel’s life and work call on each of us to vigilantly work against it,” Hollerith says. “We may never rid the world of anti-Semitism, but we in the church have a special calling to ensure it never again results in the horrors that Professor Wiesel endured.”

The bust of Wiesel is the product of two years’ work. Cathedral stone carver Sean Callahan says Wiesel’s image was sculpted by North Carolinian Charles Fagan, who had also sculpted the other corner busts in the Human Rights Porch. Callahan did the actual stone carving of Wiesel with help from Joe Alonso, the Cathedral’s head stonemason.

Wiesel’s stone visage was created using medieval techniques. “The easy, modern way to depict Elie Wiesel might be a precast concrete sculpture,” Callahan says. “Some elements of the process would be the same, but the result would be fairly generic. We use a whole series of hand-carving techniques—chisels, mallets, and any number of tools—to carve the figures directly into the stone of the Cathedral.

“The result is something permanent and one-of-a-kind. Cathedrals were built to last for generations, and the methods are passed down from one generation to the next. This sort of art can’t be mass-produced,” Callahan says, “and shouldn’t be.”

Getting Wiesel’s expression right—“serious, but not too serious, hopeful, but realistic”—was a challenge, he confesses: “Older faces like his have a lot of crags and lines from years of struggle; each of those features takes time to get just right. A younger person with fewer wrinkles and creases can come together more quickly.

“The eyes are the most important part of the sculpture, and it takes a lot of time and skill to make sure the expression captures what you’re looking for,” Callahan says. That’s particularly the case when this set of eyes witnessed horrors that, mercifully, few people ever have to behold. “They say that eyes are the windows to the soul, and that’s especially true when you’re carving a face into stone.”

A dedication of the bust is planned for October 12 in cooperation with the Elie Wiesel Foundation for Humanity and the US Holocaust Memorial Museum.

“Professor Wiesel survived the worst that humanity could offer,” Hollerith says, “but he also continually points us to the best of humanity.”

There is 1 comment on Nobel Laureate Elie Wiesel (Hon.’74) Honored with Bust in Washington National Cathedral