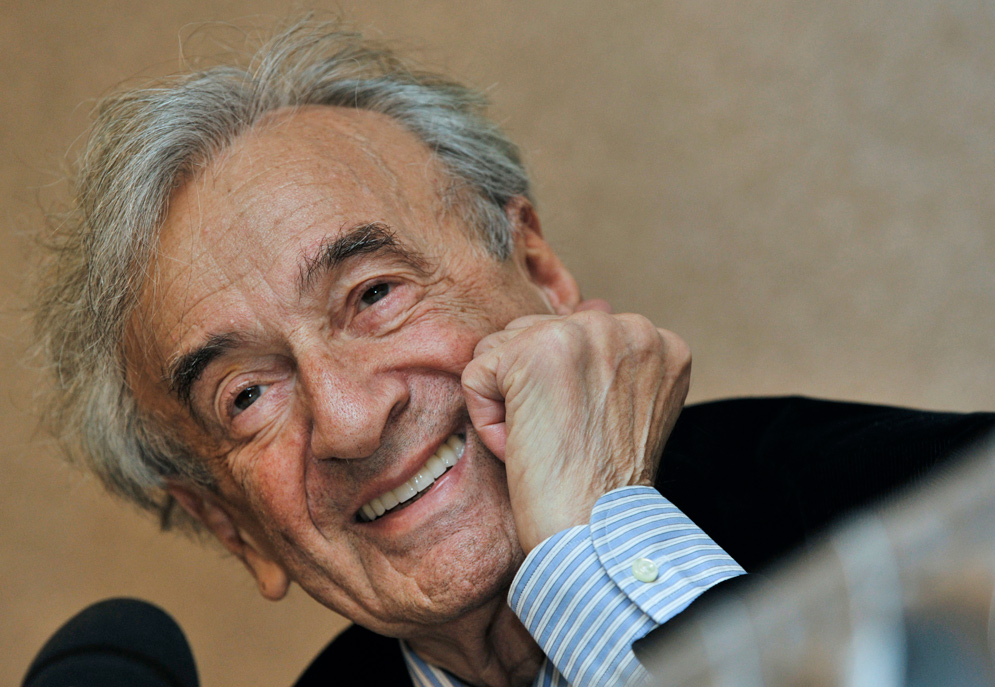 Elie Wiesel, a survivor of Auschwitz and Buchenwald, a Nobel laureate, and the most powerful witness for the six million Jews killed in the Holocaust, died Saturday at his home in New York. He was 87 years old. Wiesel (Hon.’74), who had taught at BU since 1976, was the Andrew W. Mellon Professor Emeritus in the Humanities and a College of Arts & Sciences professor emeritus of philosophy and religion.

As a writer, a peace activist, and always most important to him, a teacher, Wiesel embodied, perhaps more than any of his contemporaries, the words “bearing witness.” It was in his second-floor office at the Elie Wiesel Center for Jewish Studies, in a once-opulent mansion on Bay State Road, that the beloved professor welcomed a steady procession of students of varying backgrounds and passions and engaged them in Talmudic-style exchanges that helped guide their moral compass long after graduation. They never forgot their time with him.

President Robert A. Brown says the University is grateful and proud that Wiesel chose to teach at Boston University. “In his life of service and teaching, Elie Wiesel bore witness to evil that we would be tempted to describe as unimaginable—except that because of his elegiac and indelible recording and reflection—we are reminded was real,” says Brown. “He did not just describe the past—although that alone would have been a profound service. Because of his erudition and his compassion, he taught us how to live in ways that overcome hate. In his almost four decades on our faculty, his courses and seminars were, of course, highly sought after. And his public lectures were masterpieces of insight. We have lost a giant of our age. We must continue to learn from his example, and we are fortunate that his writings and his speeches will endure and be studied and cherished by future generations.”

Those who worked beside, or studied with, Wiesel carried his teachings and example with them throughout their lives. “Working with Professor Wiesel over the past 18 years has been one of the most meaningful and treasured experiences of my life,” says Wiesel’s longtime friend Steven Katz, the Alvin J. and Shirley Slater Chair in Jewish Holocaust Studies at BU, a CAS professor of religion, and a former director of the Elie Wiesel Center for Jewish Studies. “His openness, kindness, and continual concern were, for me, not measurable and could not be expressed in sentences.”

For decades, Wiesel’s annual fall lecture series, titled Three Encounters with Elie Wiesel: The Fascination with Jewish Tales, would fill Metcalf Hall and an overflow area where those attending could watch on live video. In the sermon-like lectures, Wiesel, a Hasid who managed to be both soft-spoken and powerfully riveting, would use stories from the Torah as springboards for a discussion of the great human questions, covering subjects such as good and evil, love, and fanaticism. His popular course Literature of Memory enthralled students as he engaged them with questions that had no pat answers, but inspired a deep probing of what it means to be human. Stories and questions—these were Wiesel’s tools in a pedagogy his former teaching assistant Ariel Burger (UNI’08) called “an ethical teaching against indifference.”

“Elie Wiesel was a friend,” says Michael Zank, a CAS professor of religion and director of the Elie Wiesel Center for Jewish Studies. “I am heartbroken at his passing. I was touched by the care his wife, Marion, brought to him as he was declining. She protected this much-sought-after man like a lioness, and the love between them was deep. Boston University is losing an iconic teacher who brought an incredible intensity to every encounter with students and colleagues. It was a privilege to know and work with him. He will be missed.”

Deeana Klepper, a CAS associate professor of religion, says that beyond his body of work and all his accolades, “Elie Wiesel really was the kind, gentle, and soulful human being you imagined him to be.”

Wiesel “emerged from unthinkable circumstances to live a thoughtful and impactful life,” says Jean Morrison, University provost. “His involvement with our students and our intellectual and academic community over the years is a remarkable and meaningful aspect of our history.”

A life devoted to bearing witness to the Holocaust

The Wiesel family lived in the town of Sighet, now part of Romania, where Wiesel was born in 1928. During World War II, he and his family and other Jews from the area were deported to the German concentration and extermination camps, where his parents and little sister perished. He and his two older sisters survived. Liberated at age 16 from Buchenwald in 1945 by advancing Allied troops, he was taken to Paris, where he studied at the Sorbonne and worked as a journalist.

Through writing, teaching, and human rights activism, Wiesel devoted his life to bearing witness to the Holocaust. In 1958, he published his first book, La Nuit, a memoir of his experiences in the concentration camps, where, he wrote “everyone lives and dies alone.” The English edition, Night, published two years later, is required reading in many public schools, and the book, now translated into 30 languages, remains an international best seller.

Leslie Epstein, a CAS professor of English and former director of the Creative Writing Program, says that upon first reading Night, “it seemed clear to me, through the voice of this young writer, still half a child, while bearing the weight of innumerable aged men, that those who had suffered had spoken to him, were speaking to him, and that surely they wished to speak through the voices of others. For me, that slim book, not quite describable, something of a testimonial, a novel, a memory, and a yartzeit candle too, became at once indispensable.” 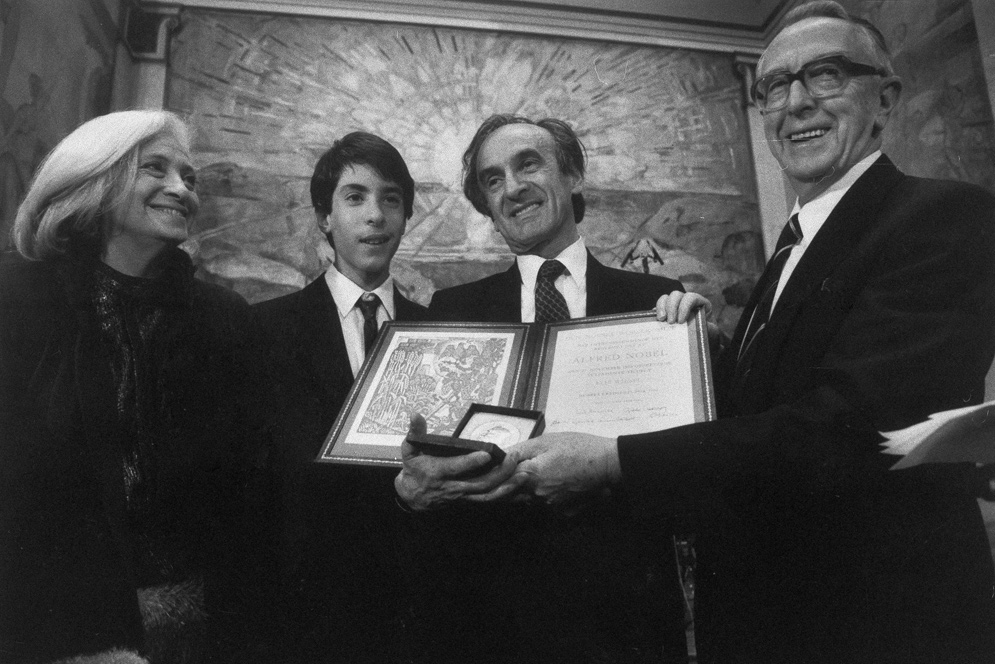 Wiesel went on to write nearly 40 books, most of them memoirs and novels, but also essays and plays. Broadening his personal experience to bear witness to the plight of persecuted minorities around the world, from the Balkans to Darfur, Wiesel and his wife, Marion Wiesel (Hon.’90), established the Elie Wiesel Foundation for Humanity soon after he was awarded the 1986 Nobel Peace Prize. The foundation’s mission, rooted in the memory of the Holocaust, is to combat indifference, intolerance, and injustice through international dialogue and youth-focused programs that promote acceptance, understanding, and equality. The international conferences of the Elie Wiesel Foundation, which focus on themes of peace, education, health, the environment, and terrorism, bring together Nobel laureates and world leaders to discuss social problems and develop suggestions for change.

Michael Grodin, a School of Public Health professor of health law, policy, and management and a School of Medicine professor of psychiatry and of family medicine, recalls Wiesel’s address to the first international conference on the Nazi doctors and the Nuremberg Code. “I remember his words,” Grodin says: ‘“We must not see any person as an abstraction. Instead, we must see in every person a universe with its own secrets, with its own treasure, with its own sources of anguish, and with some measure of triumph.’”

Although he wrote in French, Wiesel was a United States citizen and made his home in New York City. In addition to his affiliation with BU, he had been a visiting scholar at Yale University, a Distinguished Professor of Judaic Studies at the City College of New York, and had served on numerous boards of trustees and advisors. In 1978, President Jimmy Carter appointed him chairman of the President’s Commission on the Holocaust. In 1980, he became the founding chairman of the US Holocaust Memorial Council, serving until 1986. More than 100 honorary degrees from institutions of higher learning had been bestowed on him.

For his literary and human rights activities, Wiesel received numerous honors, including the Presidential Medal of Freedom, the US Congressional Gold Medal, the National Humanities Medal, the Medal of Liberty, the rank of Grand-Croix in the French Legion of Honor, and an honorary knighthood of the British Empire.

“Sometimes we must interfere”

Most of Wiesel’s novels, essays, and plays explore the subject that haunted him, the events that he described as “history’s worst crime.” Speaking, writing, traveling incessantly, he became a spokesman for human rights wherever they were threatened—in the former Soviet Union, Rwanda, Bosnia, Kosovo, South Africa. “Sometimes we must interfere,” Wiesel said in his Nobel acceptance speech. “When human lives are endangered, when human dignity is in jeopardy, national borders and sensitivities become irrelevant. Whenever men or women are persecuted because of their race, religion, or political views, that must—at that moment—become the center of the universe.”

In his Nobel citation, Wiesel was described as a messenger to mankind. “His message is one of peace, atonement, and human dignity,” the citation reads. “His belief that the forces fighting evil in the world can be victorious is a hard-won belief.”

Donated by Wiesel, much of his correspondence, manuscripts, notebooks, and other materials are in the permanent collection of BU’s Howard Gotlieb Archival Research Center. Conspicuous by their absence are personal artifacts from Wiesel’s childhood in Sighet. That childhood was stolen by the Nazis in 1944 when the 15-year-old and his family were herded into a cattle car bound for the horrors of Auschwitz.

In a 2012 interview with BU Today, Wiesel spoke about who will bear witness after the last of the Holocaust survivors are gone. “Anyone who listens to a witness becomes one,” he said. “So, therefore, my students are witnesses. Those who read my books have become witnesses. It’s so painful, and I wish they didn’t have to read this, to become the witnesses to the witnesses. It’s not easy. I was invited to speak to the United Nations General Assembly, and the lecture was called Will the World Never Learn?” We should all work harder, Wiesel said. And that work, to which he devoted his own life, “is how to save the victims anywhere, because we remember what happened to my generation, the massacres. We must also protest, or at least raise our voices.” Like he did as a young man, the victims of the Holocaust “felt abandoned,” he said. “They felt that nobody cared. I want today’s victims to know that somebody cares.”

According to Martha Liptzin Hauptman, Wiesel’s longtime assistant, his former students have gone on to become doctors, lawyers, writers, rabbis, cantors, ministers, priests, social workers, teachers, heads of academies, mothers and fathers. “They were taught by a master teacher and role model who had a profound influence on their lives,” she says. “He taught them what it means to be human in the best sense.”

There are 34 comments on Elie Wiesel (Hon.’74), Spokesman for Peace and Human Rights, Dies at 87