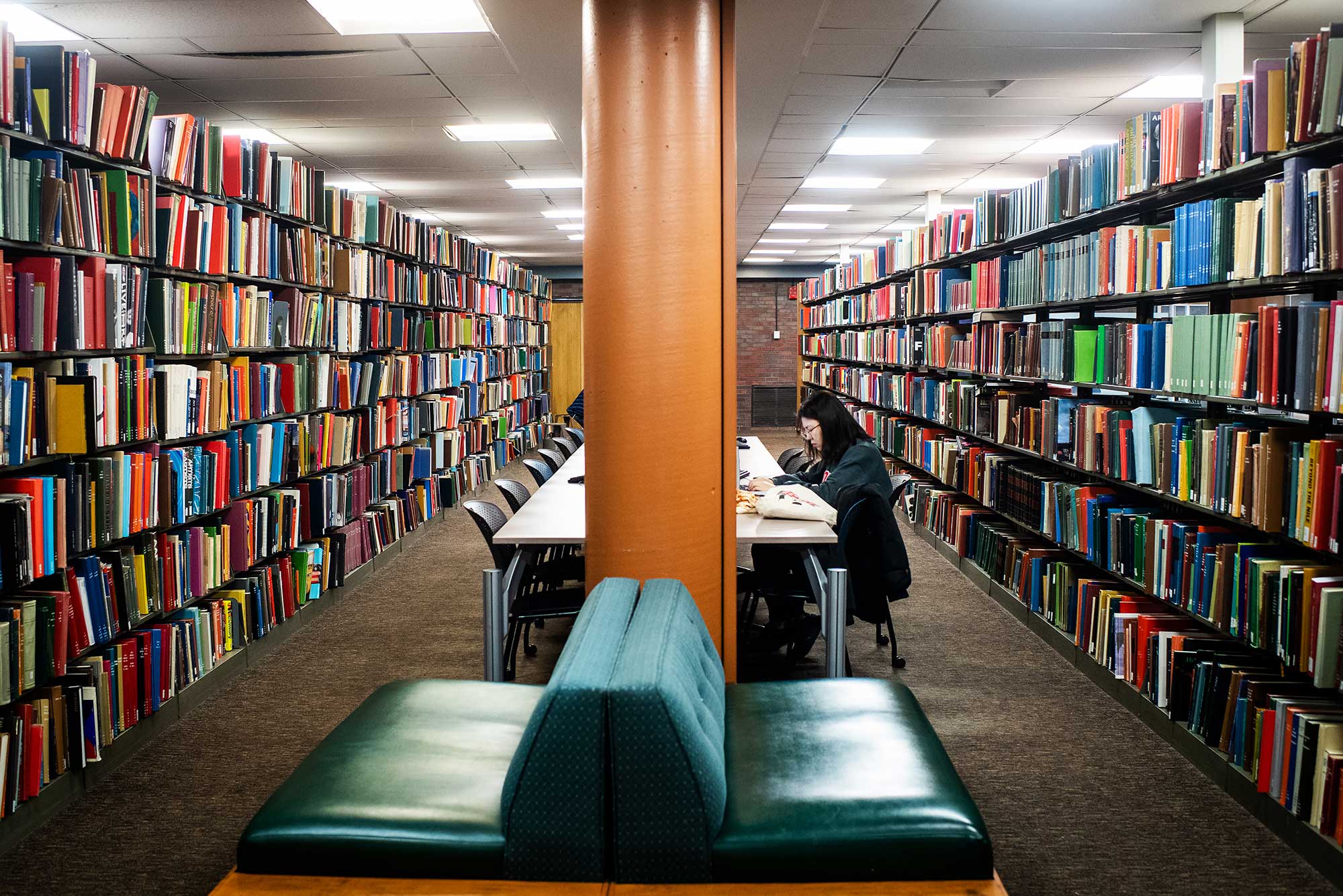 Great writers all the way back to Aristotle are on the agenda for high school students participating in a new BU Center for the Humanities summer program. Photo by Jackie Ricciardi

A $300,000 grant from the New York–based Teagle Foundation will allow the BU Center for the Humanities (BUCH) to bring Boston-area high school students to campus for the next three summers to participate in a seminar program intended to deepen their engagement with the classics while better preparing them for college—and life as an engaged citizen.

Called the One and the Many at BU, the program’s first goal is to “inspire the students and get them excited about the humanities,” says BUCH director Susan Mizruchi. “The second goal is to enhance their skills in reading and writing and articulating ideas. The third is just to give them firsthand experience of what university life is like.”

The grant will allow BUCH to offer underserved and low-income high school students—rising juniors and seniors with college in their sights—three weeks of college-level philosophy and literature seminars, tutoring, and mentorship. It’s part of Teagle’s Knowledge for Freedom program, which uses challenging texts to make students think about: What is freedom? What is virtue? What is the social good?

“We want to ensure that all students have access to an education that allows them to study great texts, books that expand their understanding of themselves and the world they live in, and time to consider humanity’s biggest questions,” says Tamara Tweel, a Teagle program director specializing in civic initiatives.

The One and the Many at BU will serve the University’s goal of making academic opportunities accessible to the community around it, says Mizruchi, William Arrowsmith Professor in the Humanities and a College of Arts & Sciences professor of English. “The University has always been focused on being a good neighbor, but I think the sense of urgency about that has been enhanced by all the things that have happened in the past year, the inequities exposed by the COVID pandemic and of course the Black Lives Matter movement.”

The One and the Many name, she says, refers to BU’s penchant for promoting individual growth among its students, faculty, and staff while also providing the diversity and opportunity of an expansive university with many moving parts.

Some 15 Boston high schoolers are being recruited for this summer’s program in partnership with the Jamaica Plain–based Summer Search Boston, the local arm of a national organization devoted to serving high school students facing systemic oppression.

Normally the students would learn and live on campus, but this summer, in line with BU’s current COVID protocols, the program will be virtual. Larger student cohorts are expected in succeeding summers, when in-person learning should once again be the norm.

“The program is founded in respect and admiration for, and belief in, the classics,” Mizruchi says. This summer the program will offer a three-unit curriculum exploring Social Justice and Change through a range of classic works, beginning in ancient Greece (Sophocles, Aristotle, Sappho), moving on to the words of leading US public intellectuals of the 19th century (Frederick Douglass, Susan B. Anthony), and ending with some of the most influential documentary films of the 20th and 21st centuries (High School by Frederick Wiseman). Each student will also create a capstone project, anything from a poetry cycle to an iPhone documentary.

“The program is really designed to give them the experience of sitting in a college seminar, with a dedicated faculty member who treats them as college students,” says Tweel. “It’s intense.”

Students are spending so much for their education, and many fear that the humanities don’t further the search for a vocation. But thinking, writing, interpreting—all fundamentals of humanities study—are essential to any kind of work that one can pursue.

The faculty members for the program are James Uden, a CAS associate professor of classical studies, Paula Austin, a CAS assistant professor of history and of African American studies and director of Graduate Studies, and Marisa Milanese, a master lecturer in the CAS Writing Program.

Seminars will be held in the mornings, and students will spend afternoons in small group enrichment activities, allowing them to work on their public speaking and writing skills. Graduate tutors and faculty will also help them with their college applications and essays, while undergraduate student mentors coach them on the nuts and bolts of college life.

“In addition to giving students this really deep, enriching, and rigorous humanities education, they are also receiving a group of friends and a mentor,” says Tweel. “They have this cohort. And the culture of the classroom becomes the culture of the summer. The questions they’re asking in the seminar room become the questions they’re talking about when they’re working on their writing and public speaking and at night in their dorm rooms.”

The mission of a university reaches beyond its own gates

That’s especially true this year, Delbanco says, as minority and low-income students have found their education, and often their families’ finances, devastated by the pandemic. Institutions like BU that participate in the Knowledge for Freedom program understand that their mission reaches beyond their own gates, and “the best kind of support they can provide is a taste of a true humanistic education,” he says.

“What I have found most moving about this program,” Delbanco says, “is how it helps young people who participate in these seminars to feel, somebody is paying attention to me, is treating me as a full person. Somebody believes that I can reach and contend with these challenging works by writers from the ancient world or the modern world, and that I have thoughts and ideas that the teacher cares about and my peers care about.”

It also is an eye-opener for the people who serve as faculty, tutors, and mentors, he says. “These students don’t take this opportunity for granted, they are hungry for it, excited by it, and touching their lives is a very rewarding experience.” Veteran faculty at schools like Columbia and Yale “often feel this is the most rewarding teaching they have done in their career.”

“If you want to grow interest in the humanities fields, you can’t start when the students arrive for freshman year in college,” Mizruchi says. “There’s a lot of worry these days, appropriately, about the humanities once again becoming the province of the elite, because of the increasing emphasis on a college education linking directly to a job at the end of it. Students are spending so much for their education, and many fear that the humanities don’t further the search for a vocation. But thinking, writing, interpreting—all fundamentals of humanities study—are essential to any kind of work that one can pursue.”

BU has “a phenomenal range of summer programs for high school students,” she notes, “but they focus almost exclusively on STEM [science, technology, engineering, and math] rather than humanities fields.”

“The push to STEM is totally understandable and laudable,” Delbanco says. “The COVID pandemic is a public health crisis, but it’s also a values crisis that has brought to the fore questions about truth and truth-telling, about inequities in our society that have been highlighted by this disease. Along with the political crisis that we’ve recently gone through, it raises difficult questions: what should we do about freedom of speech when speakers spread dangerous lies? What’s the fairest way to distribute limited resources, like vaccines? These are not STEM questions. They are humanistic questions.

“We desperately need to equip young people to think about such questions, and to see that they don’t have simple answers.”

Teagle’s Knowledge for Freedom program started at Columbia in 2009 and began spreading to other colleges and universities in 2016. About 375 students have passed through the program since it launched. The program recently expanded dramatically, with about a dozen higher education institutions participating this coming summer, and twice that many may be on board within a year or two. Delbanco and Tweel would love to see it spread nationally over time.

Students are “reading really difficult texts every day, and often writing essays about those texts and questioning their place in the world,” Tweel says. “Questioning, what is a democracy, what is the best form of social organization? How do they wrestle with America’s history and America’s aspirations, and how do they feel about their own position as citizens?”

It does seem at the moment that the nation could use an infusion of classically grounded thinking about society and our place in it.

“As about a million pundits have said in the last few weeks, if we needed a reminder of the fragility of our democracy, we got one” on January 6, Delbanco says. “I am a firm believer that an understanding of Constitutional norms and how our government works and why it was created the way it was—that these are important elements for every American. We want to make sure that young people feel engaged and involved as full participants in our democracy so we cut down on the degree of alienation and estrangement.”