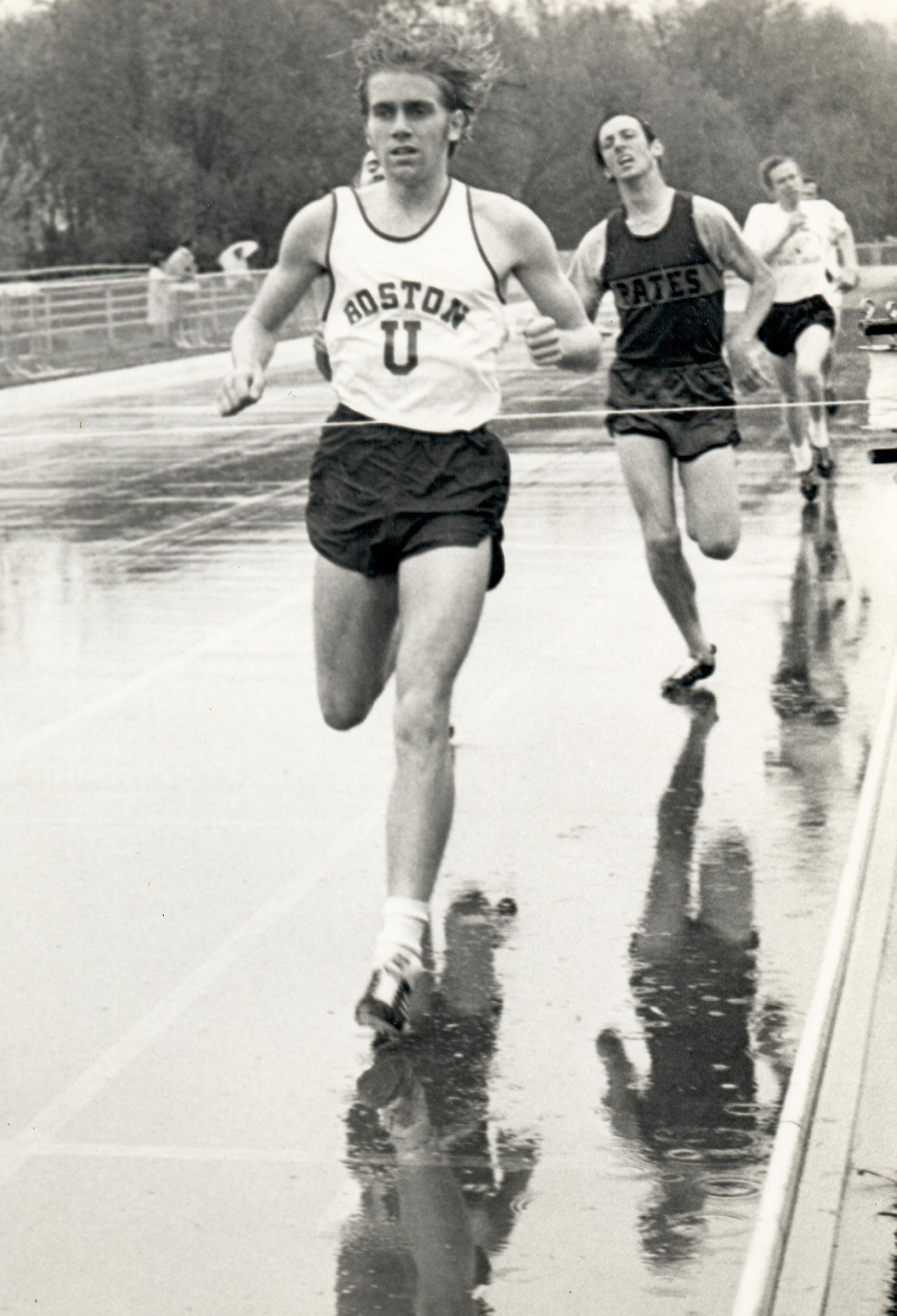 The author was captain of the BU men’s track team during his junior year, when the squad won the New England Indoor Track and Field Championship for the first time in history, by a half-point on the last event of the day. Photo by Bobby Kelly

Miracle on the Track

50 years ago, the men’s track team beat the odds and made history

In 1971, the BU men’s track team had no track, no full-time coach and, it seemed, no chance to win the New England Indoor Track and Field Championship. Practicing was always a challenge, and every morning head coach Billy Smith had to listen to the weather report, according to a 1971 Boston Globe article. “I think I’m the only indoor track coach in the country who has to check the weather before he plans a practice,” he told the paper.

The February championship meet was a big event. “In those days, the New Englands were tantamount to the Olympics,” says Irwin Cohen, coach of Northeastern University’s team, which was favored to win in 1971.

The Terriers had other plans.

It started when Ford Dennis (Questrom’74) won both the long jump and the 60-yard dash. Next, Dan Byron (Wheelock’73,’77) tied for second in the high jump, while future NBA draftee Ken Boyd (Wheelock’74), coming off the previous night’s BU basketball game in New Hampshire, placed fourth. I finished first in the 1,000-yard race.

But it was the relays that provided the gripping drama. BU’s team—John Cherry (CAS’74), Jim Ferris (CAS’74), Alan Carr-Locke (Questrom’73), and I—were still recovering from our individual races. But we won the 2-mile relay. BU led by three and a half points. With one race to go.

Cohen wasn’t concerned: “After the 2-mile relay, I figured it was over, as they had no one left for the 1-mile relay. I was ready for my acceptance speech.”

Cohen couldn’t believe what the BU coach did next.

Smith produced some of the runners who’d just run the 2-mile relay. They placed high enough to win by just a half-point—and gave Smith the title for the first time in BU’s history.

I was the captain of the team, and this victory seemed as unlikely an outcome as the US hockey team beating the Soviet Union at Lake Placid in the 1980 Olympics. After the mayhem and oxygen deprivation had subsided, the feelings of jubilation, astonishment, gratitude, and fellowship sustained us all for some time.

Cohen was just as surprised. “It may be 50 years, but I’m still upset,” he says. “Incredible.”

Tom Beatty (CAS’72) has written a more detailed narrative about the event and the participants. Email him at tombeatty27@comcast.net for a copy.

Miracle on the Track: 50 Years Ago, the Men’s Track Team Made History

There is 1 comment on Miracle on the Track: 50 Years Ago, the Men’s Track Team Made History

Miracle on the Track: 50 Years Ago, the Men’s Track Team Made History
1
share this