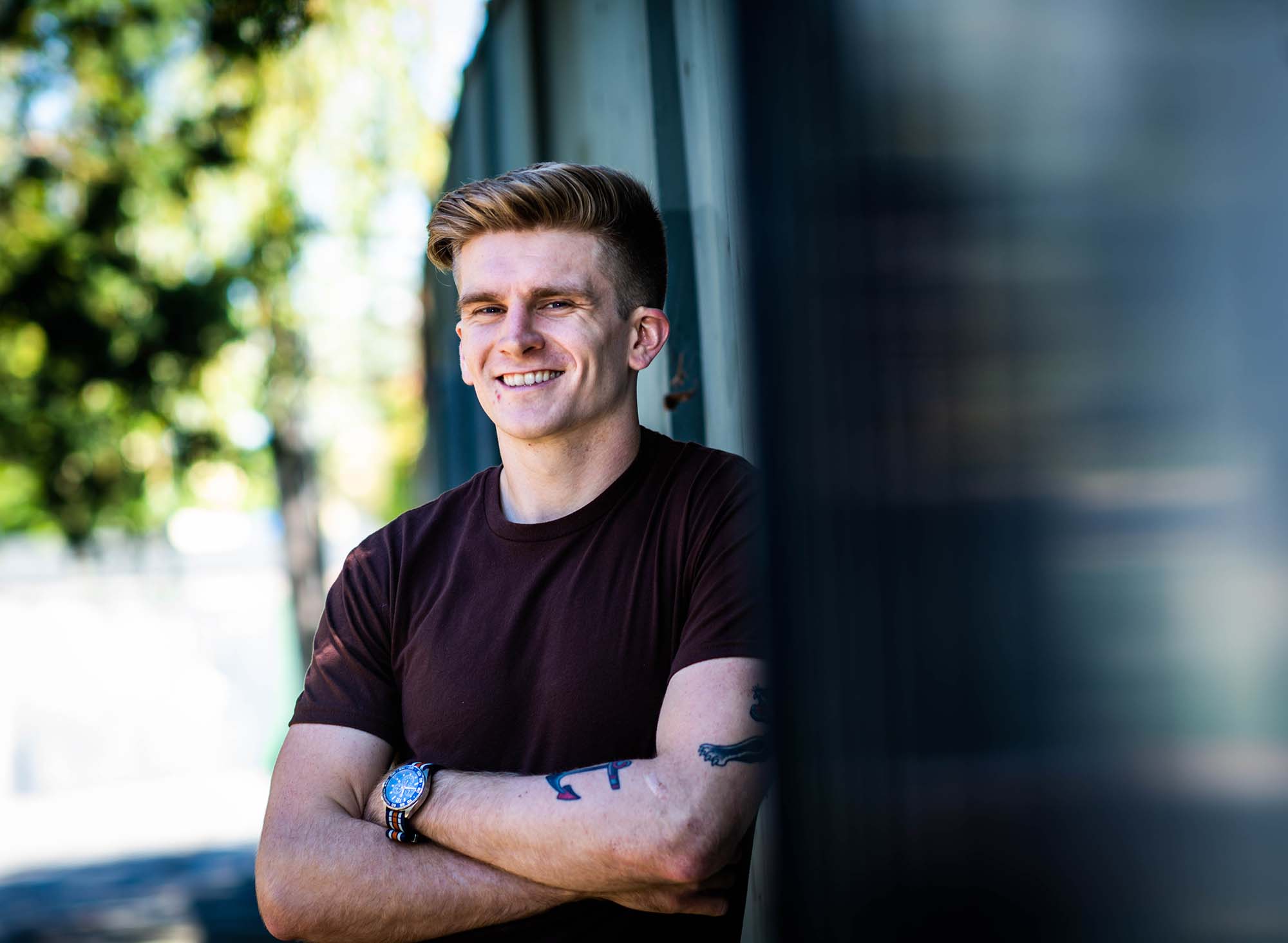 2020 Commencement student speaker Macken Murphy (CAS’20) lives in Newport, R.I., and works as a pantry chef. He will start a master’s degree in cognitive and evolutionary anthropology at Oxford University next year. Photo by Jackie Ricciardi

Macken Murphy has rewritten his graduation speech four times. Why?

When he first wrote a draft in January 2020, hoping to be selected as the class student speaker, Murphy (CAS’20) naturally had no idea that the COVID-19 pandemic was about to upend the final months of college for his class. He rewrote the speech when officials thought the ceremony would be held in fall 2020, but safety concerns kept increasing so that date didn’t pan out. He kept tweaking along the way. This weekend, he’ll finally deliver the speech when the long-delayed Class of 2020 147th Commencement takes place on Nickerson Field.

“Obviously, the 2019 draft makes absolutely no sense now, so I kept rewriting. Hopefully, the state of the world doesn’t shift dramatically again. Maybe there’ll be a fifth draft on the horizon,” he says, with a laugh.

On Sunday, Murphy will address approximately 1,800 Class of 2020 graduates and nearly 6,000 guests. He will share the stage with the ceremony’s main speaker, Victor J. Dzau, president of the National Academy of Medicine, who will give the Commencement address and receive an honorary Doctor of Science.

Murphy’s speech was selected from more than 30 submissions, which were then whittled down to 5 finalists by a committee of faculty members and administrators. “His audition was particularly winning—good words and exceptional presentation,” says selection committee member Robert Wexelblatt, a College of General Studies professor of humanities.

Murphy, who majored in history and biological anthropology and will pursue a master’s in cognitive and evolutionary anthropology at Oxford University next year, plans to talk about the teachings of Martin Luther King, Jr. (GRS’55, Hon.’59) and King’s beliefs about the role of education in a young person’s life. He’ll also talk about his conviction that college is really about transformation, that after four years, students leave as more intelligent, moral, and virtuous people. “I have some reasons for why I think that is,” he says, “and one of those reasons is that we had to go through this whole COVID experience.”

I think traditions are important, rituals like these are important. It gives us true closure, because I think many people felt that the rug just got pulled out from under them.

Since officially graduating in May 2020, Murphy has lived in Rhode Island and worked various jobs, including a gig teaching seventh-grade science as part of City Year. But the pandemic meant he was teaching both in and out of the classroom. “I got to see the incredibly detrimental effects of remote learning, as well as the scariness of in-person learning—I had to quarantine three times,” he says. His next job was as a dishwasher at a restaurant in Newport, and he has since been promoted to pantry chef. A pantry chef helps make the cold dishes, like salads and desserts, and prepare the raw bar, a job he describes as “extremely fun.”

He’s also busy with his own podcast and writing a book. During sophomore year, Murphy launched Species, a podcast about animals. Each episode examines one creature, from the black-capped chickadee to the Humuhumunukunukuapuaʻa (the state fish of Hawaii), drawing thousands of listeners. He’s also written an illustrated children’s book, based on his keystone project for Kilachand Honors College, called Animal Sidekicks. It’s about symbiosis, like when two different types of animals live near each other and provide for one another—for instance, a crab that wears a sea urchin as a hat, a bat that goes to bed inside a plant, and a warthog that likes a mongoose massage (Timon and Pumba, anyone?). It will be published in February 2022 by Neon Squid US, an imprint of Macmillan.

Why did he want to write the book? “Usually you can only find examples of symbiosis in scientific literature, which are inaccessible to children,” Murphy says. “And so it was really an honor to dive into that and find peculiar examples of symbiosis. And then work with an illustrator to bring them to life in a way that a child could access, even though otherwise it’s an arcane phenomenon that generally only a biologist would even know about.”

As he turns his attention to Sunday’s Commencement, he says he isn’t surprised that so many members of his class wanted to return to campus, even if it meant buying an expensive cross-country plane ticket and taking time off from work.

Murphy says he thinks it is meaningful for his class to gather together to reflect on their time at BU. “I think traditions are important, rituals like these are important. It gives us true closure, because I think many people felt that the rug just got pulled out from under them. I left my last class at BU not knowing that it was my last class, and I had no idea it was my last conversation with my friends in person.

“And so I think that to come back into physical space, and know that it’s the last time, know that we’re wrapping things up, I think that’s very important.”

Class of 2020 Student Commencement Speaker on the Importance of Education, Why His Class Wanted to Return to Nickerson
0
share this