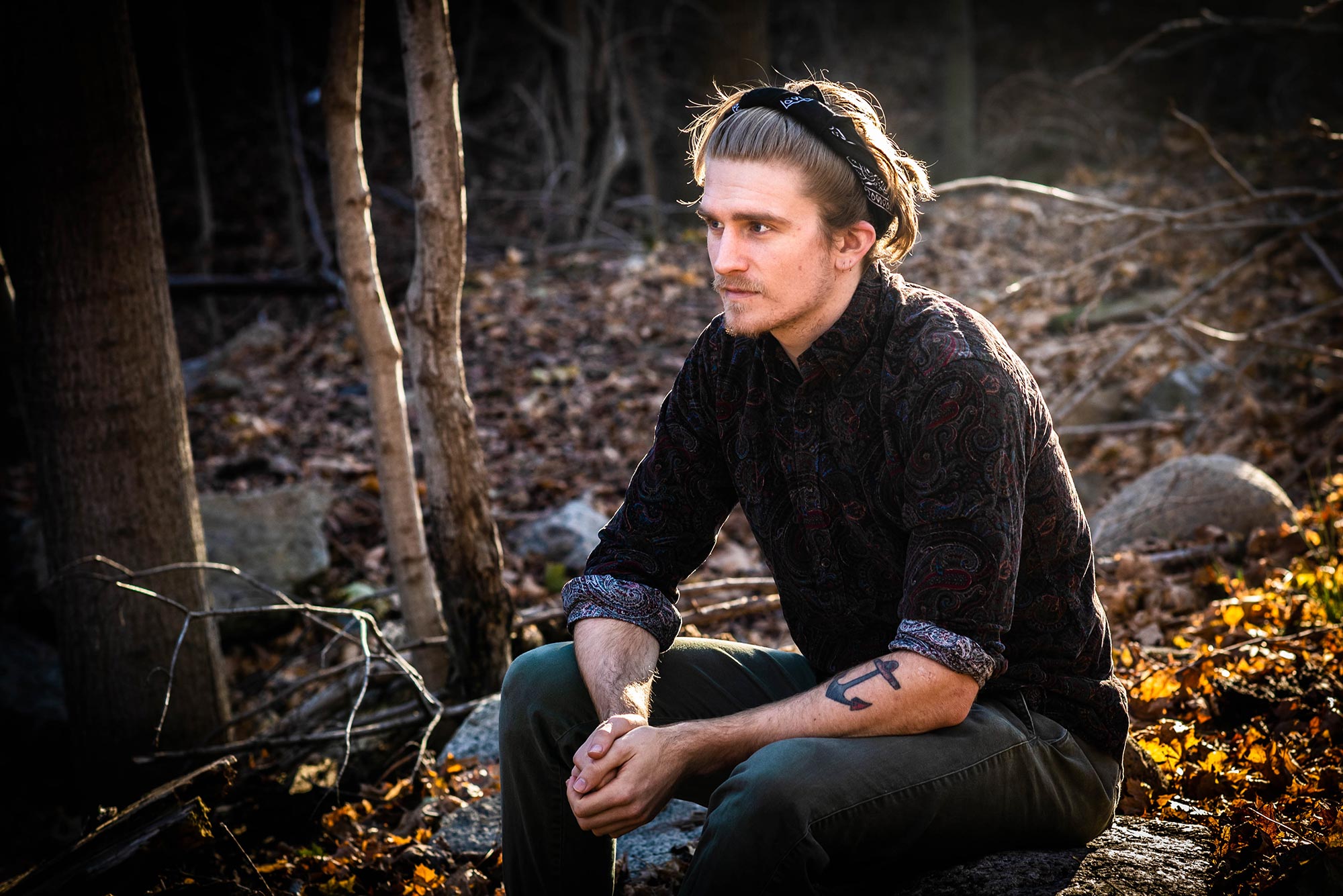 Macken Murphy (CAS’20) in nature near his apartment in Coventry, R.I. He created the Species podcast and is writing A Boston Bestiary. Photo by Jackie Ricciardi

“Oh my god, you wouldn’t believe how many pets I had,” Macken Murphy (CAS’20) says with a cackle.

He lists a family menagerie that over time included four or five hamsters, frogs, guinea pigs, four dogs, several birds, lots of fish, rabbits, a couple of rats, and “we may have had a turtle.”

“I was obsessed with animals,” he says. “I wore a T-shirt that said, ‘Hamster Man,’ I had animal trading cards, I watched nature documentaries all the time.”

No surprise that a few years later, during his sophomore year at Boston University, Murphy, a vegan, launched Species, which calls itself “The Podcast About Animals.” Posted on Sundays from his apartment in Coventry, R.I., each episode examines one type of creature at a time, drawing audiences in the thousands for episodes about the manta ray or the monk parakeet or the beaver.

“I said when I started, I’d be thrilled if a hundred people listened to it, that would be insane,” Murphy says. Currently, he averages around 24,000 listeners a month, “and that’s across 153 countries. I don’t even know how to work with those numbers.

“I go down the list of what people have asked for, and I try to mix it up, so I don’t have too many episodes on, say, spiders. If it’s a kid—like, ‘Hi, I’m Kyle and I’m nine years old, I want you to do an episode on raccoons’—that goes to the top of the list every time.”

What keeps listeners coming back is a mix of Murphy’s personal voice and his  determination to be factually accurate, while putting forth an angle or an insight you haven’t heard before.

“The animals lead me down the garden path that they have designed,” he says of his research online, in the library, and occasionally through interviews. “I’m looking for threads I can pull on to make progress into something that’s more interesting.

“I could do basically a fact sheet that I’m reading aloud for 20 minutes, but nobody would listen, because you can get that just by opening Wikipedia. I’m more interested in telling stories in a way that I’m conveying all the information, but sneak it in in a way the listener doesn’t even notice I’ve done it. I want them to accidentally become experts on that species of animal.”

Murphy’s “career in promoting understanding and feeding curiosity about animals—and, not incidentally, animal well-being—has already taken off,” says Parker Shipton, a CAS professor of anthropology and African studies, who taught Murphy. “The Species podcast shows what he can do in making this vital material vivid (even irresistible?). One can hardly guess what else he might accomplish and establish for causes like these.”

A different Species of podcast

A recent Species episode on the zebra begins with a long quote from Rudyard Kipling’s Just So Stories for Little Children on how the zebra got its stripes. After that, Murphy mixes science with a wry comic tone, and scientific language with distinctly millennial turns of phrase: “Why didn’t zebra riding become a thing? And why doesn’t it become a thing?”

The answers are not really clear, but the one convincing theory he has found, he says, is that, thanks to lions and hyenas, predation pressures on zebras were much more intense than those on ancestral horses in Eurasia—“a chiller place”—so zebras were more elusive. Humans “could never get close enough to begin the domestication process.”

And why not try it now? For one thing, zebras have evolved formidable defenses, namely their hooves. “If you try to ride a zebra, in all likelihood they’d kick your face in,” he tells his podcast audience. “While they look quite pretty and zany, these animals are lethal weapons. They are all trouble.”

“I just watched a video where this animal appears to accidentally knock a wildebeest out,” he continues. “They’re all grazing, wildebeests and zebras, and the zebra, without looking, twitches their leg back just a little, like they’re just shaking it out. It really doesn’t look like there’s any animosity to it. And their hoof connects with a wildebeest who immediately goes to sleep.”

You’ve already learned something, and been entertained too, right?

“I listen to Species during early morning runs and at my day job, where I’m usually all too happy to share new knowledge with coworkers who sometimes look at me as if I’ve lost my mind while I ramble about, for example, the fascinating lives of the Humboldt squid,” says Species fan Luke Ganje, a novelist and poet in Bismarck, N.D. “Whether it’s his commentary on the attempted escapes of a honey badger from its enclosure, or a truly beautiful monologue on the existential nature of everything to conclude his episode on the monarch butterfly, his dedication to his subject matter and the objects of weekly fascination always shines through and is brilliantly infectious.”

“Every single day I hear from someone about it. I just got a very long message from someone in Pakistan explaining how they love the show,” Murphy says. “The idea that someone in the Middle East is not only listening to it, but also that their family recommended it to them, it just blows your mind. Not what I expected at all.”

“The good thing obviously is, I’m doing something people like. That feels good from a personal perspective,” adds Murphy,. “But more important, I’m spreading information on a topic that’s really important to me, and that’s also a lot of added responsibility.”

He writes books, too

We had planned to do this story last spring, pre-pandemic, before Murphy graduated from the College of Arts & Sciences with a double major in history and biological anthropology. We caught back up with him this fall to find he’s working for AmeriCorps, helping to teach science to seventh graders in the Providence, R.I., schools. But he still produces Species in the closet of his apartment every week, and is working on two book projects.

A Boston Bestiary was his Keystone Project for Kilachand Honors College, a book exploring the everyday fauna all around us that we often overlook, from crows to turkeys and from starlings to, um, rats. He’s working with illustrator Kate Louise Powell and hopes for it to be published sometime in 2021.

“Macken said he wanted people to look closely and to appreciate the animals we consider mundane, or even nuisances, and to make the familiar strange and interesting,” says another one of his professors, Andrew Robichaud, a College of Arts & Sciences assistant professor of history and director of undergraduate studies.

I said when I started, I’d be thrilled if a hundred people listened to it, that would be insane.

“I want to make people enjoy the city more and make them realize we are not the only creatures living here,” Murphy says. “I think it would really improve the world if people had a little more  respect, a little more love, a little more appreciation for the creatures that are already around them, for free, doing wild animal stuff.”

The second book, due in 2022, already has a publisher (Macmillan), but beyond confirming it’s a nonfiction children’s book that also involves nature, Murphy says he’s not at liberty to talk about it yet.

It’s quite a resume for a recent graduate, but animals haven’t been his only obsession.

“In high school, I took a hiatus from animals and became obsessed with boxing,” he says. “I’d wake up at 5 am to train. I didn’t have much of a social life.” He won a New England championship at 14 and did well in Golden Gloves. Quitting the sport in his sophomore year at BU when he realized it wasn’t his future left him with a huge windfall of time and “a pretty serious depression.”

At BU, he first majored in history, then found another focus in biological anthropology. “A friend said it is everything you talk about all the time, you should check it out. Biological anthropology is the study of humans as if we’re an animal—because we are an animal,” he says. It frustrates him that other social sciences treat humans as if we are “animals without instincts, animals that haven’t been completely molded by evolution, and that’s just not true.”

Eventually he rekindled his interest in other animals, too. Shipton, Robichaud, and other  professors “looked at animals through a broad, interdisciplinary lens, and really opened up the idea of animals as a tool to think with.”

As someone who had listened to a lot of podcasts for years, he eventually contrived to put the two interests together in Species—and fill some of those hours that used to be devoted to boxing.

“I didn’t expect it to be listened to by anybody,” he says. “But that’s not what happened.”

CAS Alum Creates a Different Species of Podcast
3
share this