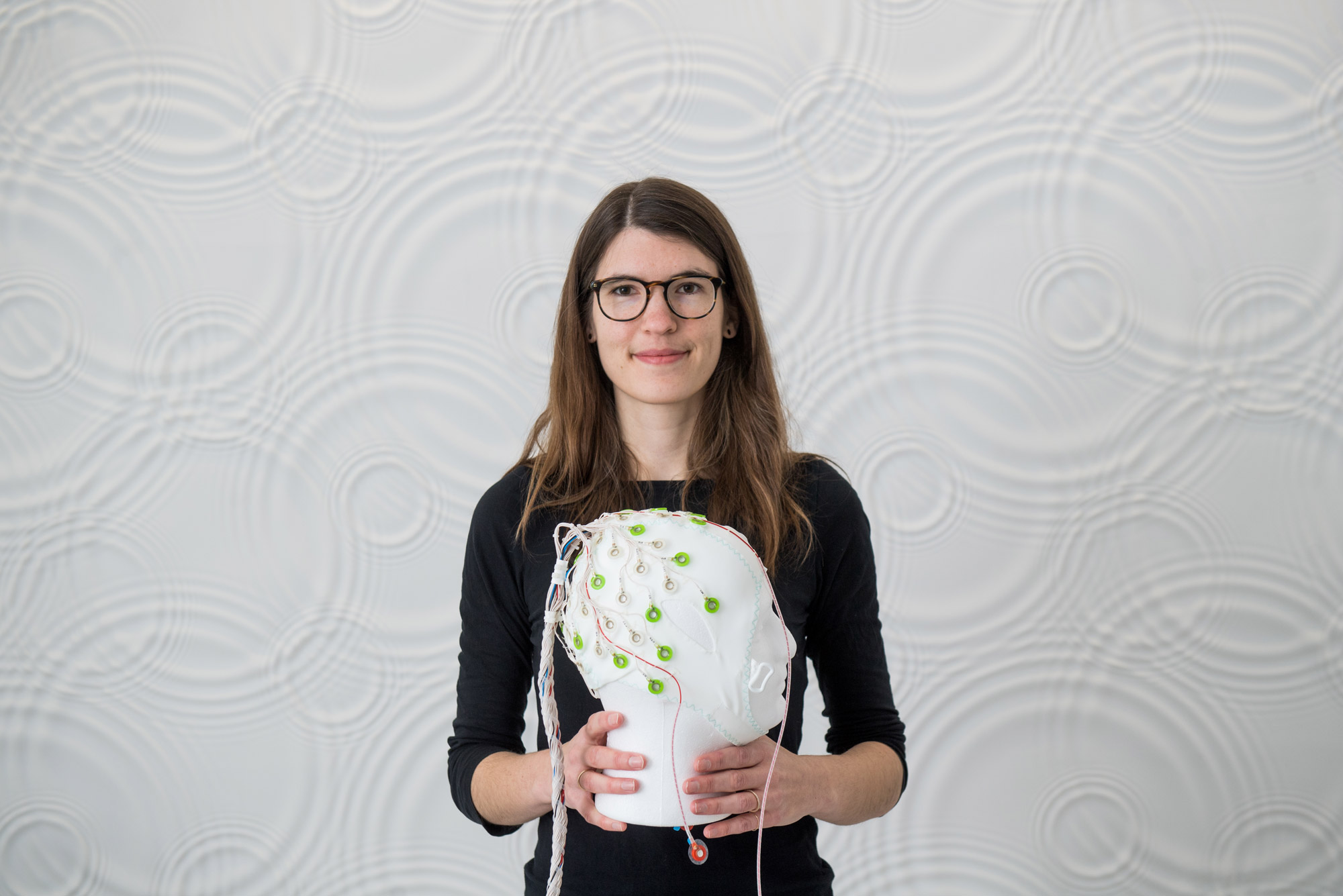 In her lab at BU, Laura Lewis and her team of PhD students use sophisticated imaging techniques to simultaneously monitor dozens of neuron clusters in human volunteers while they sleep. Photo by Cydney Scott

How Sleep Is Impacted by Brain Circuitry and Aging

Complex brain circuits govern how and when we sleep, and the quality of rest. But how exactly do those circuits work, how do they change over the course of our lives, and are there ways they can be manipulated to improve our sleep and brain health? Laura Lewis, a Boston University College of Engineering assistant professor of biomedical engineering, is developing groundbreaking methods for peering into the human brain during sleep. And her work is being noticed: The Pew Charitable Trusts announced Tuesday that Lewis will be one of their newest research fellows.

“It’s incredible to have this kind of foundation support that lets you do new and sometimes pretty risky science,” says Lewis, a faculty member of BU’s Center for Systems Neuroscience. “It also points to the importance of sleep as a topic. Sleep is so fundamental to brain health and the functioning of our brains, yet it’s still a mysterious topic.”

“This is a big deal,” says John White, a BU College of Engineering professor and chair of biomedical engineering. “It’s a high-prestige foundation looking to support unusually high-impact research. They’re not looking for incremental work; they’re looking for difference-making work.”

Small clusters of neurons deep within the brain serve as switches between sleep and wakefulness, Lewis says. “But why do so many switches exist, and do they also regulate the different stages within the sleep cycle?” she says. In her lab, Lewis and her team of PhD students use sophisticated imaging techniques to simultaneously monitor dozens of these neuron clusters in human volunteers. The researchers hope to gain a deeper understanding of how sleep promotes brain health and why sleep is disrupted in neurological and psychiatric disorders.

“[Lewis has] been pushing these techniques to get remarkable data that everybody thought was impossible to get,” White says.

Previously, fMRI was considered too slow to pick up on second-by-second neural activity, White says. “But Laura has figured out how to double or triple the speed at which she can measure these signals,” he says. “It’s hard to do technically, but it really makes a difference. I think that’s why she’s getting all these awards.”

“I feel very lucky,” says Lewis. “It reflects that this is the perfect time to delve into all the complexities of what’s happening in your brain during sleep.”

The Pew Charitable Trusts is a nongovernmental organization that promotes the power of knowledge in order to solve today’s most challenging problems. For the next four years, Pew will provide BU with $75,000 annually to support Lewis’ research. Lewis and four other members of this year’s Pew Biomedical Scholars class were chosen to form a subset of the Kathryn W. Davis Aging Brain Scholars, supported by the Kathryn W. Davis Peace by Pieces Fund. The initiative is aimed at increasing our understanding of how the brain changes as we age—which is closely tied to how sleep patterns change over the course of one’s life.

“That special status is a sign of how impactful Laura’s work is going to be, and how readily it’s going to apply to the science on aging,” says White.

So, does Lewis herself make it a point to catch sufficient Z’s?

“Ironically,” says Lewis, “sleep researchers often don’t get great sleep because we do so many experiments at night.” The Pew grant, she adds, will help Lewis and her students to better share that workload.

Adapted for The Brink from an article originally published by BU Engineering.

How Sleep Is Impacted by Brain Circuitry and Aging