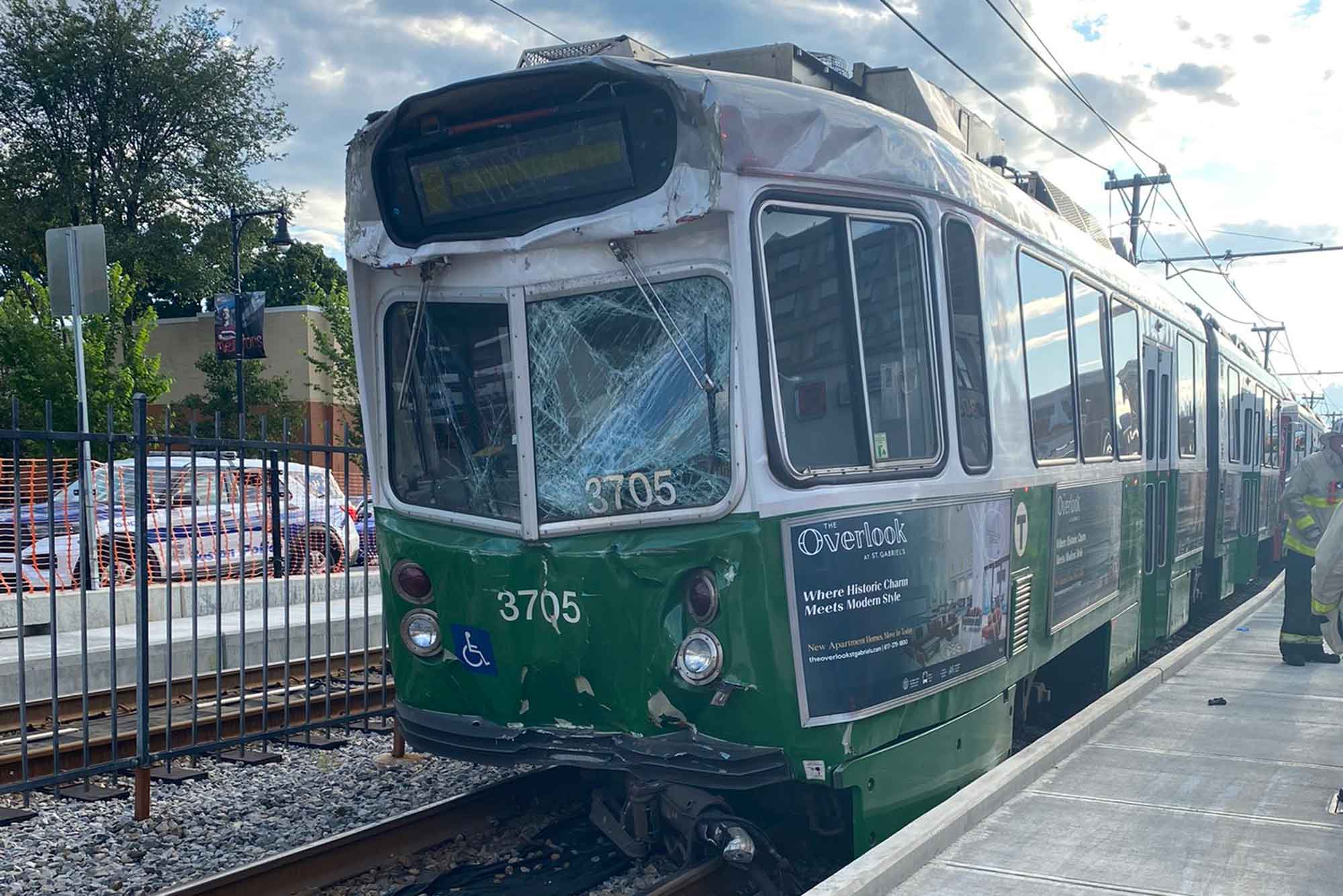 Cause of the Friday evening accident is not known, as one passenger describes scary scene with passengers sprawled on the floor

This story published Friday evening and was updated Saturday morning.

A crash Friday evening between two outbound MBTA Green Line trolleys close to Agganis Arena left 25 people injured, with non-life-threatening injuries, and shut down the B Line along Commonwealth Avenue forcing passengers onto shuttle buses for several hours. The cause of the crash is not known, and the MBTA said an investigation is underway.

The MBTA said the B Line collision involved trains near Babcock Street, right at the intersection of Agganis on one corner and Blaze Pizza on the other. It’s also the area where the T is wrapping up construction on the consolidation of four stations into two stations in order to speed up the notoriously slow trip through the Boston University campus along Comm Ave. Four train operators were among those injured.

On Saturday, The Boston Globe reported that one of those four operators had been placed on paid administrative leave, based on “developments in the investigation.” Also Saturday, the National Transportation Safety Board said that it would be investigating the crash.

One passenger who was on the outbound train that was hit from behind described the crash and the aftermath. Brian Sirman (GRS’14, CAS’02, MET’08) graduated from BU’s College of Arts & Sciences in 2002, taught in the writing program and stayed in Boston for 20 years, but now lives in Nashville. He was visiting friends in Boston for the weekend.

“I was sitting in the back, the train was stopped,” Sirman told BU Today Saturday morning. “All of a sudden it jolted forward, it seemed like really fast, and it seemed like it kept going. I remember there was a girl sprawled on the floor screaming, ‘Stop!’ I saw one guy who had been sitting on the side and another person who’d been standing, they were also sprawled on the floor. The worst injury I saw was a girl behind me clutching her shoulder, crying in a lot of pain. I saw one person taken away on a stretcher. At first I thought it might have been mechanical failure because of the way we jolted forward so suddenly. It was only when I got off and saw the damage that I realized what happened.”

According to reports with overhead video of the crash scene, one trolley could be seen with damage to one end, and some shattered glass on the front windshield. The accident upended the busy road during a Friday evening rush hour, as fire, police and rescue vehicles converged on the scene and television news choppers hovered overhead.

Shortly before 9 pm Friday, the MBTA tweeted: “Green Line Update: Shuttle buses continue to operate on the B Branch between Kenmore and Washington Street. Tonight’s planned work on the D Branch has been cancelled.” By Saturday morning, service had been restored.

MBTA General Manager Steve Poftak said the two trains were traveling outbound, and the trailing train collided with the one in front. He said all the victims were conscious and alert, and that the agency’s “thoughts are with them.”

“Our second thought is turning to an investigation to understand why this happened,” he said in a press conference at the scene.

In 2009, the last time two Green Line trolleys collided, a 24-year-old train operator said he was texting his girlfriend, causing him to miss a red signal and crash into the train in front of him. That accident injured 49 people, caused $10 million in damage, and sparked multiple lawsuits, in addition to moving the MBTA to restrict drivers from having their cell phones while working.

“We will obviously get to the bottom of this,” Poftak said when asked what might have caused Friday’s crash. “This should not happen. We will find out why it happened and we will ensure that it does not happen again.”

Poftak would not speculate on the cause of the accident other than to say they got too close together, which is something that is not supposed to happen. He also said, “there is significant damage to infrastructure that will have to be repaired.”

Another passenger who was on board one of the trains in the crash told The Boston Globe: “It was so fast. Very, very fast,” Flavio Correa of Allston, who was with his wife, told the Globe. He said he bumped his knee and elbow, and his wife his her chest, but they were otherwise fine.