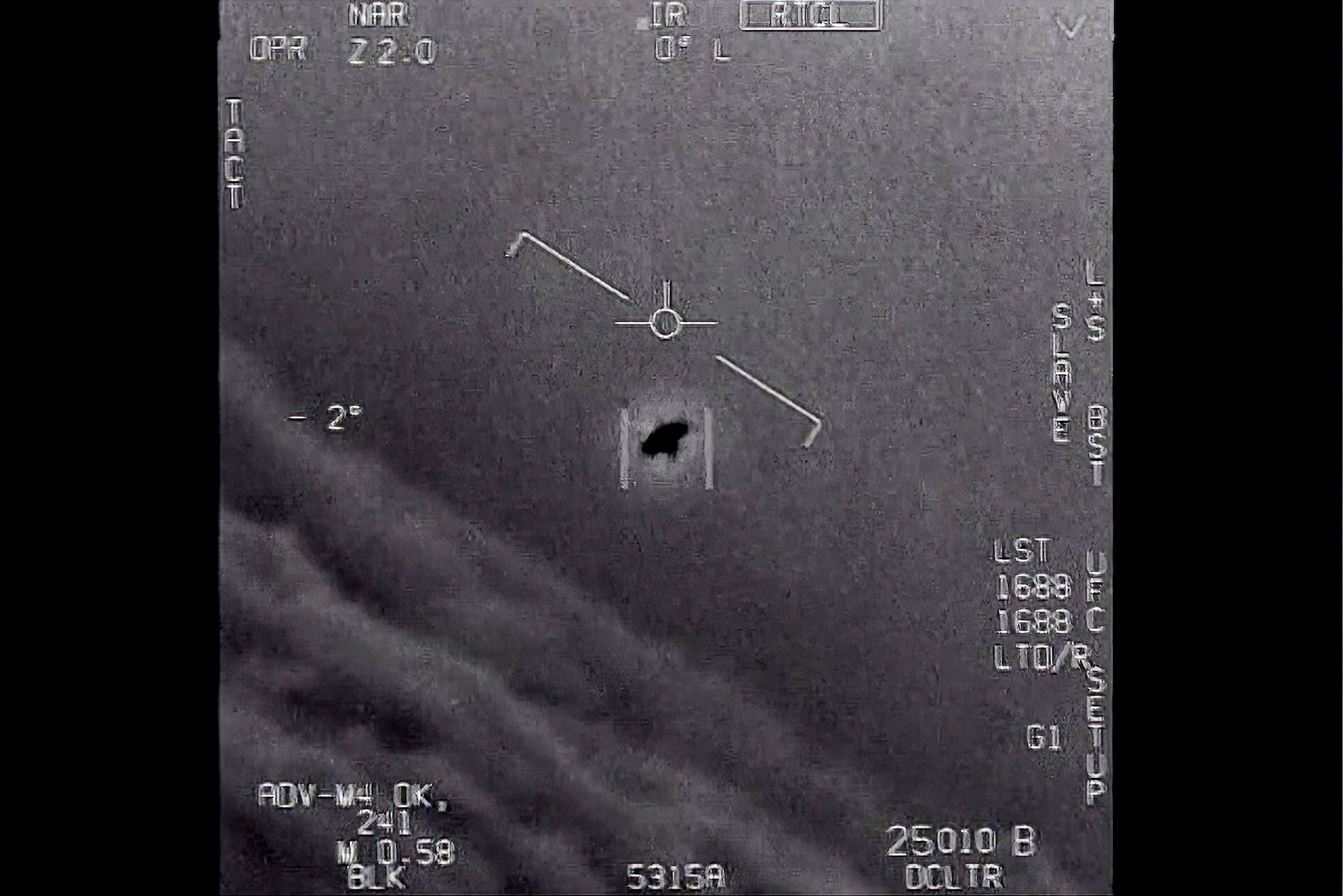 This 2015 image shows an unidentified object that rotated as it flew along clouds, according to the fighter pilots tracking it. Photo by Department of Defense via AP

Are UFOs Visitors from Space? Government Report Won’t Rule It Out

The truth is out there, but for now, it doesn’t involve extraterrestrial visitors. It could, however, be a foreign power’s technology.

UFOs aren’t just the playpen of conspiracy theorists and sci-fi fans: NASA awards grants to reputable scientists seeking real-life ETs, and we’ve been scanning the heavens for signs of artificial signals for decades, says Thomas Bania, a College of Arts & Sciences professor of astronomy. He researches the possibility of life elsewhere, along with many in his field. (“Carl Sagan…owes me money,” he says, a debt he knows he won’t collect, as his celebrity colleague died in 1996.)

Bania and Jack Weinstein, a Pardee School of Global Studies professor of the practice of international security and a retired Air Force lieutenant general, offered their takes on the government’s conclusions for BU Today.

With Thomas Bania and Jack Weinstein

BU Today: Any doubts about the government’s reported conclusion that the recent sightings aren’t extraterrestrials?

Jack Weinstein: I have no expertise in UFOs except for watching Men in Black. I never flew for the Air Force—I was a nuclear and space guy. [Never] did we track something that we thought was a UFO.

My concern with the report is that [it] stated it could be a foreign power’s technology. The UFO sightings dating back into the ’50s and ’60s were never technology that we were able to see later on from a foreign power. That never materialized later into a foreign nation having a capability like that. I can’t comment on whether they’re UFOs or not, because I don’t want to look like a kook, to be blunt. All I’m saying is that if a foreign power developed technology, then later on we’d see technology like that from them, either in operation or testing.

Thomas Bania: Do any of us believe these are actual flying saucers from outer space? No. [But] there really isn’t enough information to evaluate what is going on.

[The government] shows images of these objects, and they have ruled out extraterrestrial technology. Yet they then say these things have enormous speeds and do maneuvers that are impossible to replicate by our technology. All of those claims require that we know the distance to the target. Think of an airplane—if you look at a 747 in the sky, it doesn’t appear to be moving very fast. It’s going 600 miles an hour, but the rate at which a film of that plane would look [like it’s going] depends on the distance. And [the government’s] not telling us whether they know the distance. These are not [reliable] measurements of speed and acceleration unless they know the distance to the object, and they’re not telling us.

Weinstein: I won’t go that far. China has developed some good technology much faster than we thought they were going to. To go back: if we think a foreign power has developed a technology, we would have then seen that technology later on in use or in testing.

Bania: I agree with Professor Weinstein that until these recent reports, there has never been any evidence to invoke foreign technology [as UFOs]; 90 percent of UFO reports have always had prosaic, natural explanations.

The point is, how do you interpret what these experts are responding to—the enormous speeds and maneuvers? If that’s the case, I agree we would know if somebody had developed some device that could do those maneuvers. I am questioning that interpretation of the data; without knowing the distance, there would be no evidence for enormous accelerations and avionic capabilities in terms of maneuverability.

No new technology is required here [to explain recent sightings]. We know how to build things, drones, complex electronics. So do our adversaries. You’re talking to someone who’s responsible for more than half of the UFO reports in Bergen County, N. J., in the late 1960s—my Explorers Boy Scouts specialized in creating UFOs.

BU Today: Vladimir Putin claimed to have developed a super cruise missile. Is it possible he wasn’t blustering?

Weinstein: I don’t trust anything Vladimir Putin says. I put everything in the “bluster” category. If a country has developed a technology that they can use militarily that they don’t want anyone to know anything about, no one is going to ever say anything. We want to surprise the adversary on the battlefield.

Bania: I don’t think you can stealth a cruise missile to radar to the extent that you could a small drone, things the size you could buy at Micro Center in Boston.

BU Today: What’s your best guess as to what these pilots saw?

Weinstein: It could be truly a UFO. I never want to say something could never be. It could be a phenomenon caused by nature—just a weather phenomenon. We learn something new every day, we’re flying at higher altitude than we’ve ever flown before, so maybe we’re seeing things that would look differently at a lower altitude.

My bottom line is: I think everyone who believes in UFOs will see a conspiracy if the government doesn’t say they are UFOs. I can’t believe we’re the most intelligent life-form in the entire universe, ’cause that means the universe is pretty dumb. If I’m an extraterrestrial and I can travel from other planets, I would think they would be smart enough to evade radar.

Bania: It’s just a pure guess, but I would think these things would be electronic warfare. They’re trying to get intelligence of exactly what our weapons systems are capable of doing, the frequencies they use, the encoding of radar transmissions, things they could use to develop countermeasures to render themselves invisible to radar. It would be either Russia or China. I’m more worried about China.

What it isn’t is little green men. If these were extraterrestrials, and they had the technology to traverse the stars and get to Earth, they would play these games? To what end? Land on the goddamn White House lawn and say hello.

Are UFOs Visitors from Space? Government Report Won’t Rule It Out

There are 152 comments on Are UFOs Visitors from Space? Government Report Won’t Rule It Out

Are UFOs Visitors from Space? Government Report Won’t Rule It Out
152
share this