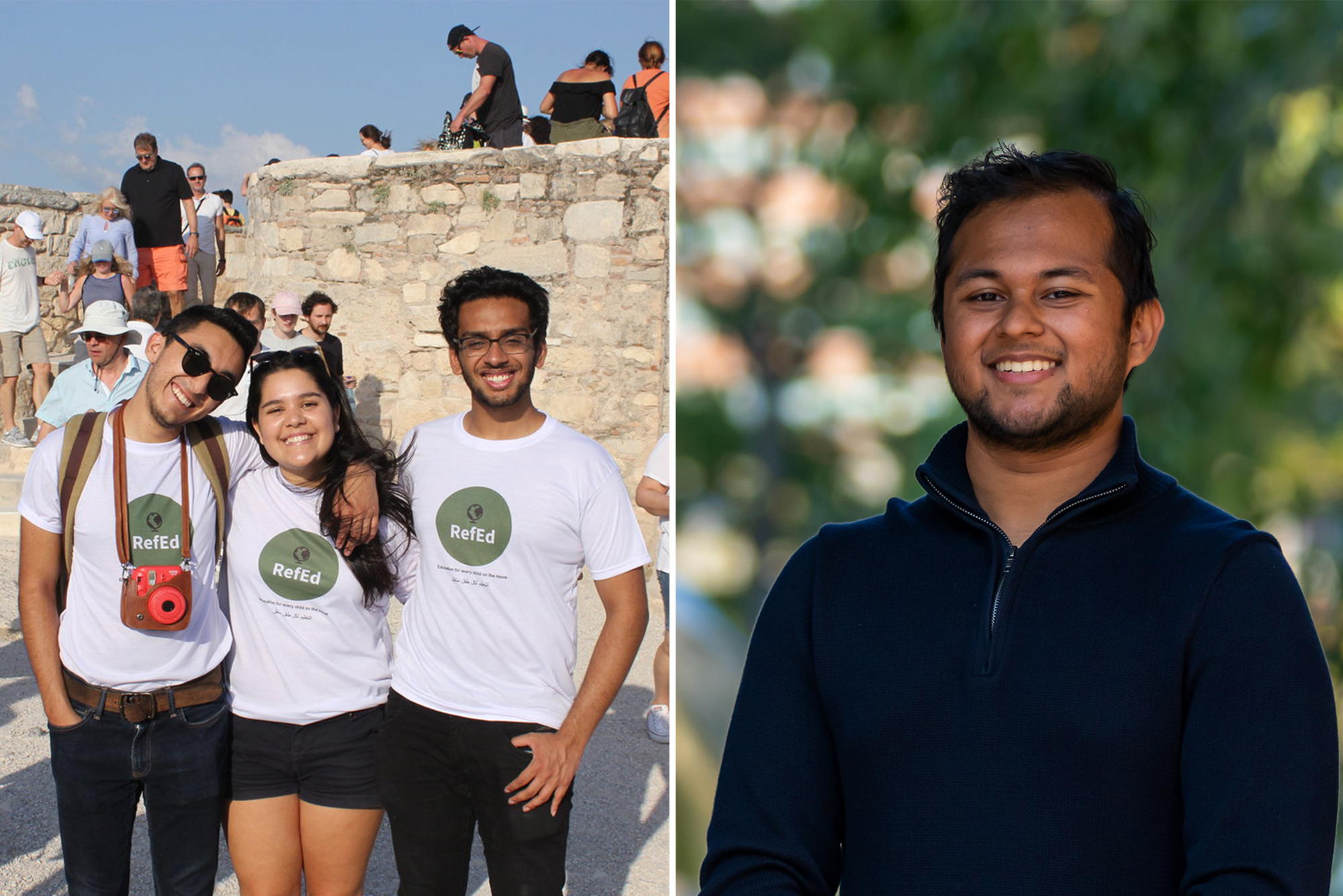 Prize money will be used to fund start-ups

“I’m going to set the world record as the fastest person to ever cry,” Albert Jimenez said Friday evening.

Just seconds earlier, Jimenez (CGS’16, CAS’18, Wheelock’21), Yasmin Morais (CAS’18), and Abhishek Valivarthi (Sargent’21) had been crowned first-place winners in the social impact track at Innovate@BU’s annual New Venture Competition. Their award? $18,000 towards the growth of their start-up, RefEd, an app that helps educate refugee students who don’t have consistent access to educational materials before they are resettled. Students are able to take tailored courses in English, mathematics, and the Arabic alphabet through the interactive app.

A dozen entrepreneurial teams competed at Friday’s event, which is open to ventures of any kind (technology- or non-technology-based) that are developing solutions to address important and unmet needs, and which show potential to turn the idea into a scalable venture. The competition is open to BU students and alums who graduated within the past year. This year’s competition drew teams of undergraduate, graduate, and doctoral students and of alums, representing nine BU schools. Participants apply to compete in one of two tracks, general ideas (for-profit ventures focused on creating value for a large market) or social impact ideas (for-profit, nonprofit, or hybrid ventures focused on creating a positive social impact).

The competition began earlier this year with 87 applicants, but after three rounds of intense pitching to a panel of judges starting in February, that list had been winnowed to six winners. Three teams from each track were awarded $6,000, $8,000, or $18,000 for third, second, or first place, respectively.

Jimenez, Morais, and Valivarthi are currently developing a partnership with a nongovernmental organization that runs two refugee camps in Uganda to use RefEd. They say the app will help support 300 children this year.

“We really look forward to being able to do some good in the world and help the students and kids who need it most,” Valivarthi said in his acceptance speech. “This means so much to us,” Morais added. “We worked really hard on this for a few years now.”

The first-prize winner in the general ideas track was awarded to Rishab Nayak (CAS’21) and Madison Rifkin, a senior at Northeastern, for Mount, which sells fleets of electric scooters with mobility data analytics and fleet management systems. It’s used by Airbnb hosts and other vacation rental properties, allowing them to rent out branded scooters to their guests. It’s currently being used in 34 US cities.

A second-place prize of $8,000 was awarded in the social impact track to Kim Bress (STH’21), Cindy Rassi (STH’22), and their friend Maria Fernandes-Dominique, for Turn In. Reach Out, an organization that provides social and emotional learning (SEL) resources to BIPOC communities in the Boston area and resources to help families practice meditation, community building, expressive arts, and emotional growth. “Our organization works at the center of healing and social justice,” Rassi said during Friday’s event. The team projects that by 2023 their nonprofit will have served 32,000 individuals.

The second-place prize in the general ideas track was awarded to the developers of Sky International Music Education, which is working to improve accessibility to music education for students in China by offering online music lessons from accomplished teachers around the world. Developer Zhuqing Zhang (CFA’21), who led the team that developed the project, says the idea came from her own experience having to travel long distances from her rural home to take violin lessons. Sky hires musicians who provide interactive music lessons to meet the demand for instrument learning in China. Zhang, and her team—which includes Guo Zhang (MIT), Lei Lei (University of Indiana), and Zilong Chen (Caltech)—have already been honored for their work at several MIT competitions.

Rounding out the lineup of winners were the creators of Viinko—a platform that seeks to provide young students with the tools, structure, and support to develop time-management skills—in the social impact track, and in the general ideas track, the developers of Phonetic Beats, which uses rap music to teach phonics to young children.

Both ideas were inspired by BU students’ real-life experiences.

Victoria Kinnealey (Questrom’22), one of the creators of Viinko, cites her brother’s struggle with the pressures of school as the impetus for developing the integrated digital planner. Faith Rodgers (CFA’22), who developed Phonetic Beats with friends Meresha Perkins and Kathleen McEntee, says the idea came about after watching her own son struggle.

“When my son was two, he was diagnosed with a severe speech delay,” Rodgers said during her Friday night pitch to judges. “The delay made learning seemingly impossible. When it came time to learn phonics, not only did he struggle to make letter sounds, he was uninterested in every big brain phonics system.” Rodgers, Perkins, and McEntee, all mothers, created the album Phonetic Beats: A-Z Raps.

“Not only did [my son] love it, but I posted it on social media, and in minutes, it had gone viral,” Rodgers said. “I had thousands of toddler moms asking when the album was coming out.”

The audience also voted to give $500 extra to two teams: Phonetic Beats and RefEd.

At the conclusion of Friday’s event, Wendy Swart Grossman, a Metropolitan College lecturer and the creative practitioner-in-residence at Innovate@BU, brought it all home. “Now it’s up to all of us, through connection and community, to bring these innovations to market,” she said.