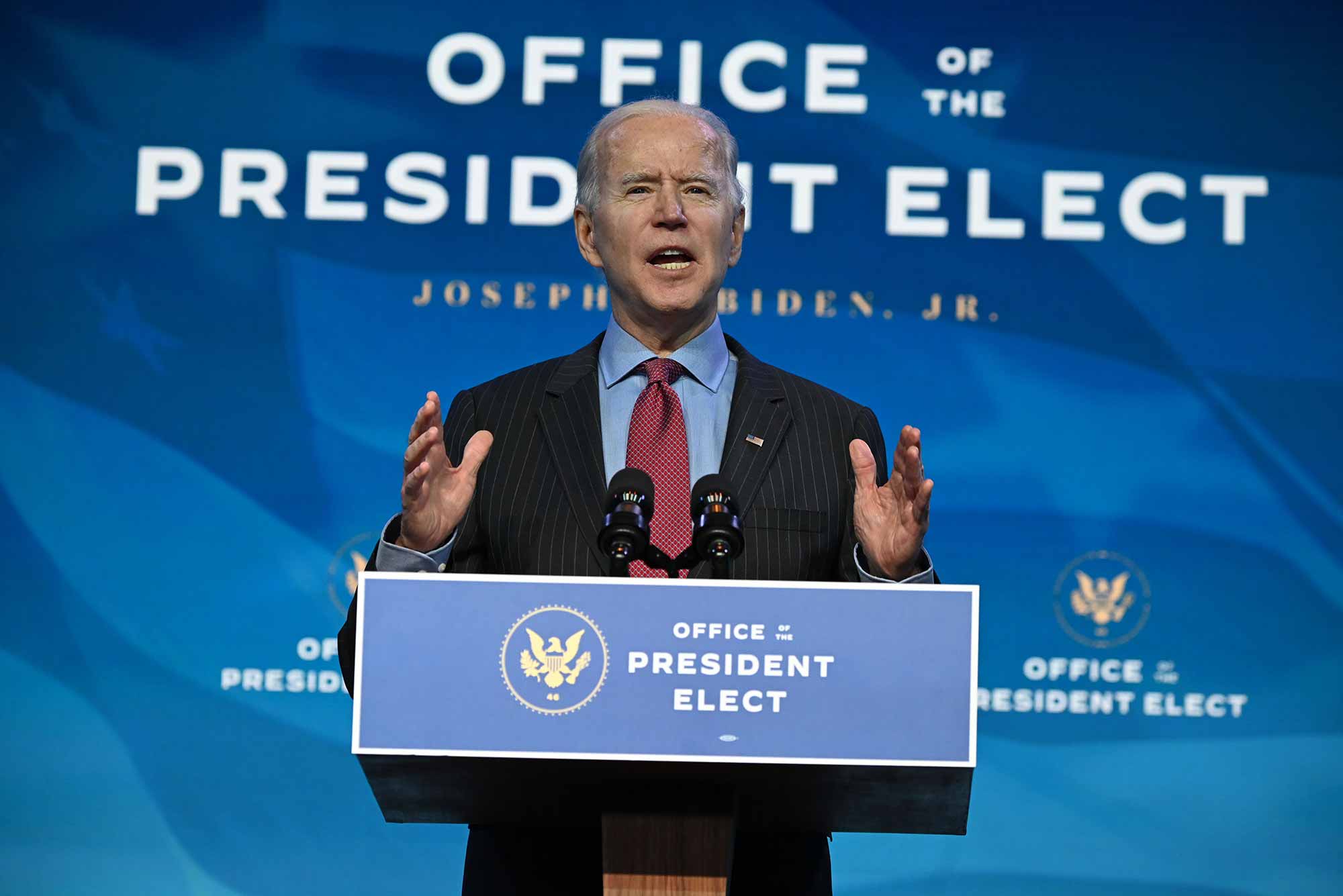 US President-elect Joe Biden announcing key nominees for his economic and jobs team at the Queen Theater in Wilmington, Del., on January 8. Photo by Jim Watson/AFP via Getty Images

Change Arrives in Washington: What It Could Mean for Higher Ed

These and many other changes affecting the University community are likely to emerge from the Biden administration following today’s presidential inauguration, according to BU’s Federal Relations team.

Biden is already expected to issue executive orders Wednesday rescinding the “Muslim ban” on travel from certain countries and extending the current pause on student loan repayments, which was put in place as an economic relief effort during the pandemic and is due to expire on January 31.

Broadly, the fact that Democrats now control the US Senate for the first time since Barack Obama’s first term, as well as the House and the White House, will give them “the power to set the agenda,” says Jennifer Grodsky, vice president for federal relations.

Those eager for an end to Trump administration policies may have to be patient, however. While some changes can be made quickly via executive order or congressional review, others may require long bureaucratic processes or legislative action, according to Grodsky and Emily Burlij, associate director for federal relations.

The pair work in Washington to strengthen the University’s ties to federal agencies and policymakers and keep the University community informed on what to anticipate from the Executive Branch and Congress.

BU Today spoke with Grodsky and Burlij to get an outline of changes that might be in store under President Joe Biden and Vice President Kamala Harris and what they could mean for Boston University.

Biden has already set four priorities—racial equity, climate change, economic recovery, and COVID-19—and his administration will view its work through that lens, Grodsky says. Historically Black colleges and schools with higher minority enrollment, such as community colleges, are likely to be a first priority.

“Democrats will be able to choose what comes to the floor,” she says. “Not that it will necessarily be easy to pass legislation, because for most bills you still need a 60-vote majority, and that’s really challenging. Frankly even the 51-vote majority will be challenging, because there are Democrats who won’t necessarily vote with them.

“But that power to set the agenda will make a difference, and for nominations it’s the same thing, because you only need 51 votes,” she says, and Democrats are unlikely to dissent on appointments.

While Biden’s nominee for Secretary of Education, Connecticut schools chief Miguel Cardona, is not controversial, he may face a “bumpy ride” in his nomination hearings, she says, because Trump’s nominee, Betsy DeVos, “really got grilled, and people are looking for payback.”

“The administration will be interested in how our sector is doing on racial equity and economic recovery,” Grodsky says. “Do students graduate at the same rate regardless of race? How are admissions policies decided? Are they equitable? When they look at economic recovery, are our students graduating with good jobs and low debt, or do we have programs that have high debt and don’t lead to a good job?”

She anticipates more oversight and that universities will be asked to demonstrate more results in those areas.

On Title IX, Grodsky expects the Biden sdministration to roll back Trump-era changes, particularly on sexual assault cases, where the definition and the scope of enforcement had been narrowed and the process made more court-like. Changing that is going to be a long process, taking more than a year, because of the regulatory procedure involved, she says.

The new administration is also likely to be more supportive of affirmative action. “The Department of Justice will probably take a different perspective” than under Trump, Burlij says.

Another widely discussed issue is college loan debt. “There’s tremendous pressure from congressional Democrats and advocates for some measure of debt forgiveness, like $10,000 in debt forgiveness,” Grodsky says. “I think that’s an expensive proposition that will be a challenge for the administration to implement.”

Climate science will be a higher priority for sure and Biden has a personal interest in cancer research (his son Beau died of brain cancer in 2015), which will mean a renewed focus and additional funding there, says Grodsky. Also in the spotlight: “infectious disease research, because of where we are in the world.” Research funding may be included in forthcoming COVID response plans from the Biden-Harris team.

Some scientific areas the Trump administration championed are expected to receive continued focus, though, including artificial intelligence, biotechnology, and materials science.

“You’ll recognize a lot of those are areas of strength for BU,” she says, “so we are really excited about this moment and are really hoping to capitalize on that.”

Burlij has already spoken to Biden transition team members and found them receptive to input. Increased funding from the National Institutes of Health, the National Science Foundation, and others are expected, which would mean more opportunities for BU scientists. The Trump administration’s proposed cuts to research funding were often rejected by Congress, and this is an area with a considerable upside potential under Biden, according to Grodsky.

Concerns about foreign influence on research and intellectual espionage on University campuses are bipartisan and likely to continue, Burlij says, but the focus may widen and be less China-centric. “I think the scrutiny of who’s coming to study at our labs, how can we get a better handle on that, and what should the University’s role be are issues we will continue to discuss,” she says.

One other change: the phrase “climate change” will no longer be a political hot potato.

“It turned out a lot of climate science was funded,” Grodsky says, “but people were skittish about using the phrase in their research proposals, and I think that will change, and you will see more explicit callouts that the agencies are seeking proposals to address or mitigate climate change.”

The incoming administration will focus increasingly on safe and inclusive lab settings, free from sexual harassment and diverse in staffing, as well as partnerships with minority-serving institutions.

“I think you’ll see a freeze on current immigration policies,” Burlij predicts. Restarting DACA (Deferred Action for Childhood Arrivals) will be a focus, despite ongoing court cases over the validity of the program. “I think you’ll see ramped-up discussions either putting pressure on the administration to extend and expand the program or to have Congress codify the program.”

Reportedly, Biden intends to send legislation to Capitol Hill this week proposing a variety of immigration changes. Notable for BU: people who earn PhDs from an American university would be exempt from visa limits, making study in the United States more attractive, as the pathway to remaining in this country would become clearer, and DACA beneficiaries would be able to apply for a green card immediately. Getting immigration legislation passed by Congress is notoriously difficult, though, Grodsky says.

I think our best hope is for less friction for just getting basic things done so that international students and scholars can come to BU.

Biden’s nominee for Homeland Security Secretary, Alejandro Mayorkas, was one of the architects of DACA under Obama, she notes, “so that’s going to be a priority for him, to turn that back on.”

As for international visas, Burlij says, “you certainly see a more welcoming stance. They’ll freeze a lot of the attempts to keep people out. But there’s been some big damage the last few years.” Canada and other countries have benefited from the Trump administration’s posture, she says, and it will be interesting to see if international families’ comfort levels with US policies return to previous levels, especially given current political turmoil.

Overall, Biden nominees in Homeland Security, the State Department, and other areas have said that “the United States is back and open to the world now,” Grodsky says. “They have taken pains to signal that the posture is going to be different and welcoming, and I think our best hope is for less friction for just getting basic things done so that international students and scholars can come to BU.”

Grodsky notes that Congress did not go along with Trump attempts to defund the National Endowment for the Humanities, but that now those areas will once again be priorities for the Executive Branch.

“I think the way the Biden-Harris administration will see the arts is through a lens of economic recovery, so are we sending money to local theaters and arts programs and jobs?” Grodsky says. Given his foreign policy background, Biden also sees the arts as a tool of cultural diplomacy, so exchange programs should also ramp up again.

Change Arrives in Washington: What It Could Mean for Higher Ed

There is 1 comment on Change Arrives in Washington: What It Could Mean for Higher Ed

Change Arrives in Washington: What It Could Mean for Higher Ed
1
share this