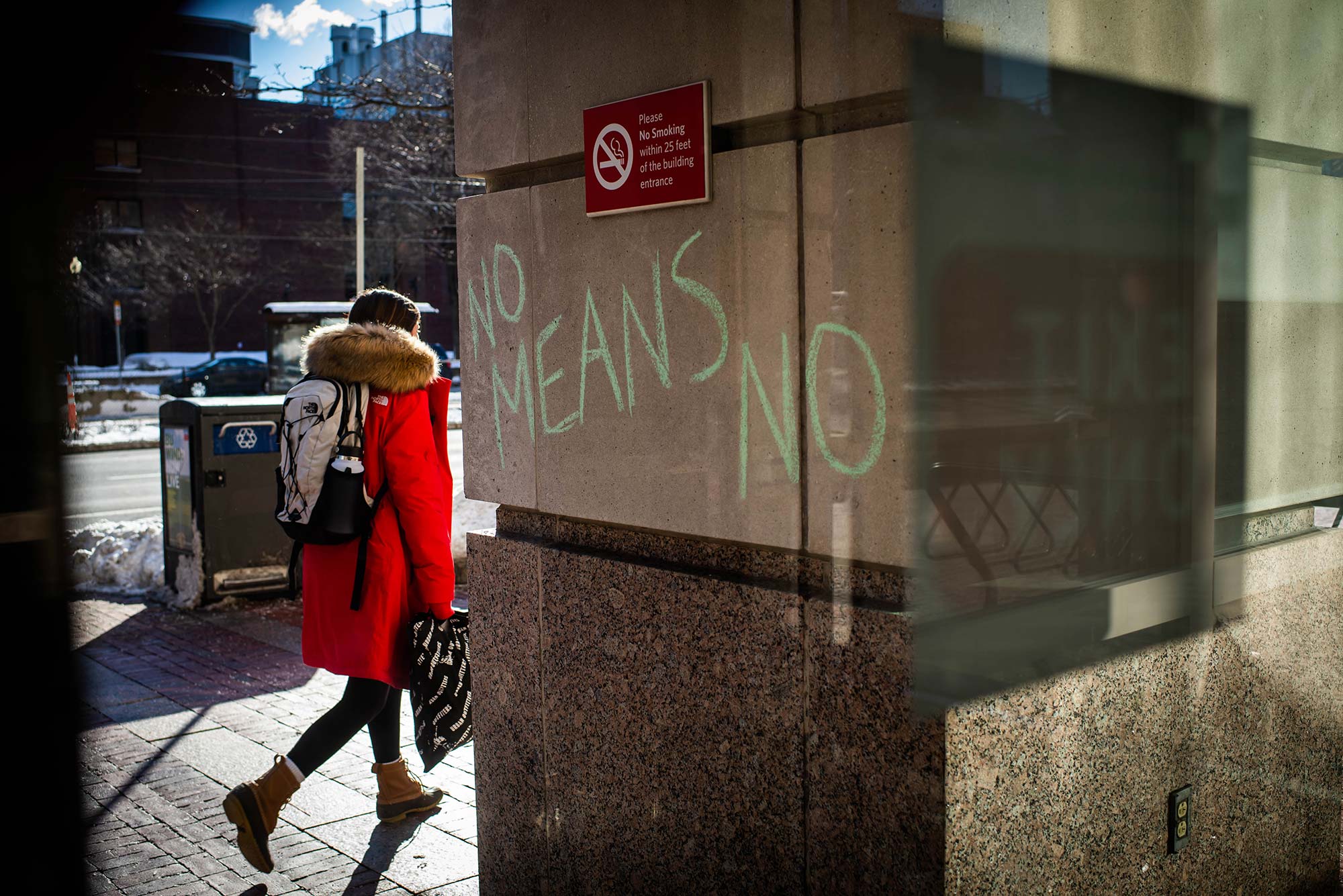 The University’s commitments stem from talks with student groups like Campus Survivors, which organized a protest in February in response to the University’s handling of sexual assault cases. Photo by Jackie Ricciardi

Among them: increased funding for SARP and building a more-diverse staff to handle cases

In a letter sent Friday to students responding to their concerns about Boston University’s policies and actions around sexual assault accusations, Jean Morrison, BU provost and chief academic officer, outlined a series of new commitments BU is making to help prevent sexual assaults from happening on campus and to improve policies around reporting and investigating processes for assaults.

“Boston University should be a place where all feel safe and welcome, and we are committed to doing the work to achieve this goal,” Morrison writes. “While we will continue to discuss opportunities for improvement, I am hopeful that these initial commitments will be meaningful steps in the right direction in ensuring a safe and healthy environment for all members of our community.”

Among the commitments are increased funding for the Sexual Assault Response & Prevention Center (SARP) to hire additional graduate student educators, implementing a more diverse staff at Judicial Affairs, forming a University-wide committee dedicated to sexual assault and harassment prevention, and simplifying the language used in the University’s reporting policies, including the sexual misconduct policies outlined in Title IX. The University will also implement a right of appeal for complainants in non–Title IX cases.

Other commitments are increasing and improving training for members of the BU community, including resident assistants and leaders of student organizations. BU’s current mandatory sexual misconduct prevention training for faculty, staff, and new students is also under review.

The new commitments stem, in part, from talks with members of student organizations like Campus Survivors, a group started by three BU students in 2020 to create a safe space for survivors of sexual violence on campuses. Earlier this year, the group organized a protest—attended by more than 600 students—about how the University handles sexual assault cases, calling for more help for survivors of sexual assault and demanding the administration respond to students’ sexual assault accusations with more force and clarity.

In a statement to BU Today about the provost’s commitments, Campus Survivors cofounders Prisha Sujin Kumar (CAS’22), Sophia Kim (CAS’23), and Yashica Kataria (CAS’23) write, “We are happy to see the commitments made by Boston University’s administration so far, and we anticipate seeing these commitments transformed into actionable change. To us, this is just the beginning of change at BU as there is still a long way to go.

“Although we want to see change on campus as soon as possible, we want to make sure that we don’t overlook any details in the process. We hope BU will continue having students more involved in the process since students are the ones most affected by policies surrounding campus safety.”

Some things, however, cannot change. Under the former secretary of education, Betsy DeVos, the US Department of Education introduced federal guidance requiring schools to allow those accused of sexual assault to be able to cross-examine their accuser in Title IX sexual misconduct cases. The University does not have the power to bar cross-examinations, says Nathan Brewer, director of SARP, who describes the guidance as having a “chilling effect” on new complaints. But according to the provost’s letter, BU is working to shorten the length of time required to investigate and appeal complaints of sexual misconduct, which Brewer calls an important change.

“Survivors are often rightly concerned about filing a complaint if they believe their case will drag out for many months,” he says. “Shortening the process is likely to lead to more survivors filing a complaint.”

Speeding up accomodations provided to survivors of sexual assault is another priority in Morrison’s letter. “In partnership with the Office of Disability & Access Services, we will establish a new process to ensure expedited support and accommodations for survivors where needed,” it says.

“We at SARP are so thankful for the students who have organized to make their voices heard,” Brewer says. “In addition to the focus on their personal healing, this group has committed to helping change BU for the better. We are all indebted to their work.”

The Sexual Assault and Response Prevention Center is on call 24/7 at 617-353-SARP (7277). Find information on reporting sexual misconduct to the University here. More resources are available at SARP. Outside of BU, resources include the Boston Rape Area Crisis Center and the Rape, Abuse & Incest National Network.