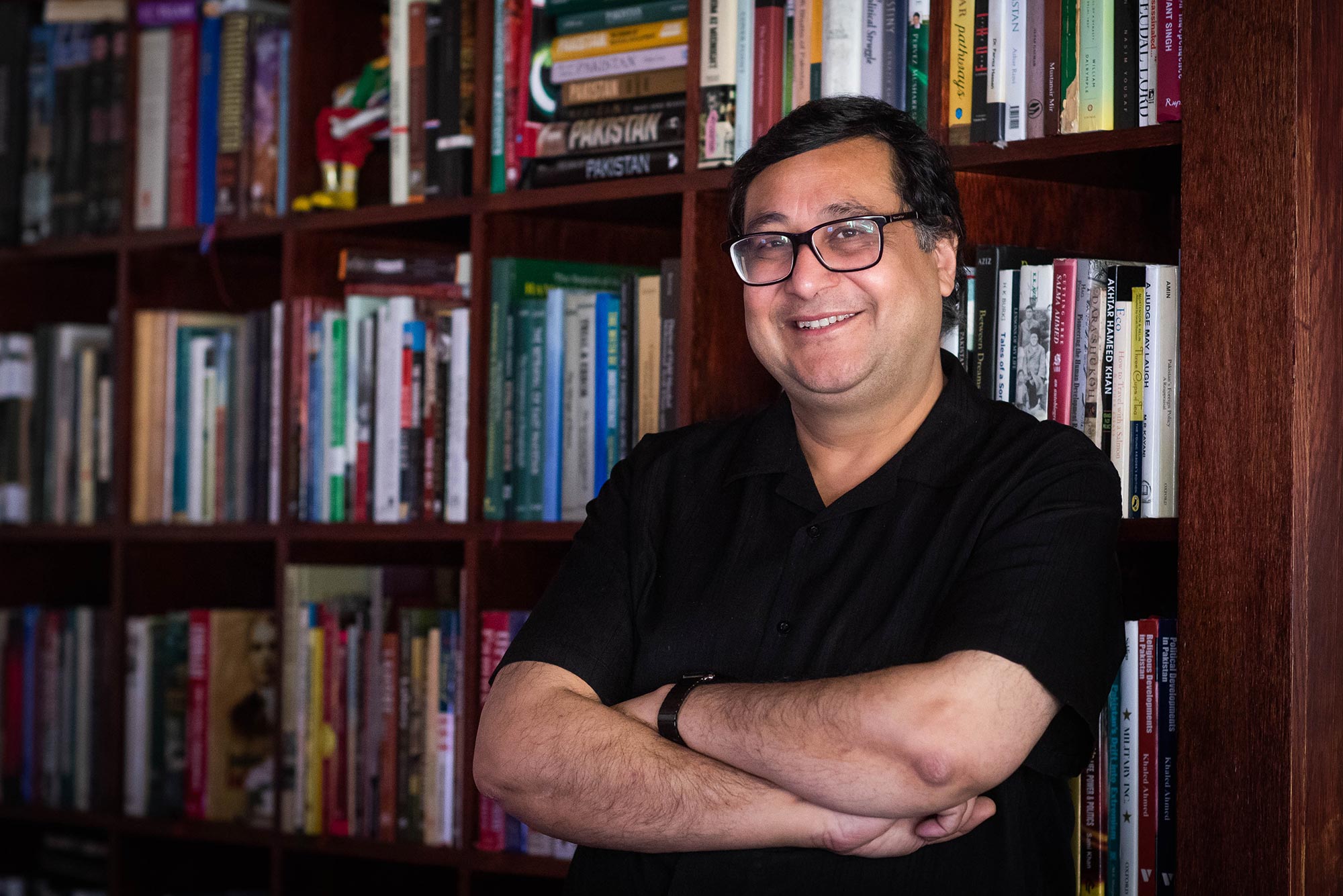 From his library at home, Adil Najam, dean of BU’s Frederick S. Pardee School of Global Studies, has conducted Zoom interviews with 67 experts about the future of their fields post–COVID-19.

Unlike many of us who vowed we’d use the COVID-19 lockdown to write that novel, read great books, catch up on world history, or embark on some other path to self-improvement, Adil Najam has actually achieved what he set out to do back in March. The result is “The World after Coronavirus,” his 67-installment (and counting) crash course video series on the future of, well, just about everything, from racism to meat to civil rights in cyberspace.

Najam is the dean of Boston University’s Frederick S. Pardee School of Global Studies and a College of Arts & Sciences professor of international relations and of earth and environment. Shortly after BU canceled all campus events, including the seminars and conferences that are the lifeblood of Pardee and its affiliated Frederick S. Pardee Center for the Study of the Longer-Range Future, Najam came up with an idea: he would ask 10 to 12 experts, via Zoom, about the post–COVID-19 future of their fields.

“I remember saying, ‘Right now, everyone is talking about what is COVID, what do you do?’” Najam recalls. “But, sooner or later, everyone is going to think about what is going to happen after this. The greatest global challenge of our lives is happening right now and that’s what we study. This is going to change the world. We should be speaking to people about what will happen the morning after.”

By the third week of June, he was up to 63 experts, from BU and around the world, a mix of global policymakers and big thinkers, writers, prominent academics, and rising stars. The lineup includes Francis Fukuyama on democracy, Thomas Picketty on inequality, Ibram X. Kendi (a scholar of racism and newly appointed director of the BU Center for Antiracist Research) on racism, Enrico Letta on the future of the European Union, Kishore Mahbubani on world order, Danielle Citron (a BU School of Law professor of law) on civil rights in cyberspace, David Miliband on refugees, Sandro Galea (BU School of Public Health Robert A. Knox Professor and Dean) on mental health, Rachel Nolan (a Pardee assistant professor of international relations) on immigration, Elizabeth Economy on US-China relations, and Ann Marie Lipinski on journalism. Peter Singer discusses the future of meat. Nobel Prize winner Angus Deaton analyzes economic despair. Graham Allison discusses ancient Greek historian Thucydides.

Zooming with Najam from his home in India, Ramachandra Guha, an Indian historian and author of an acclaimed two-volume biography of Gandhi, discusses President Trump and the 2020 election. “I wanted to talk to him about India, he wanted to talk about Trump,” Najam says. “He said, ‘There has never in 90 years been a more important election—not just for the US, but for the world—than this US election coming up.’”

Some potential guests are still in limbo. “I reached out to Malala,” Najam says. “She did say that she will try, but right now she has exams.” He was hoping to talk with her about young people around the world. (Malala is Malala Yousafzai, the Pakistani woman who, at 17, won the 2014 Nobel Peace Prize for taking on the Taliban with her crusade for children’s rights.)

Najam coauthored a report for the Intergovernmental Panel on Climate Change, which garnered for him and the other members of the scientific panel the 2007 Nobel Peace Prize.

Not bad for someone who started out as a sportswriter covering cricket in Pakistan before focusing on engineering, the environment, and international affairs. Najam holds three graduate degrees from MIT, including a PhD in international environmental policy. He is also the former host of two popular Pakistani TV talk shows, one on celebrities, and the other—fittingly, as it turns out—on the future.

Now, as the genial host of “The World after Coronavirus,” Najam Zooms with his guests around the globe from the library of his home in Boxborough, Mass. “I look at the books and think, ‘Who do I want to talk to?’” he says.

He discovered that far-flung experts with usually jam-packed schedules were stuck at home like everyone else, with time on their hands and a lot to say. “Everyone wants to talk about this thing,” Najam says. “This is so big. Any calamity—talking about it is in itself therapy. Everyone wants to link to this moment.”

So, what has he learned after three months and 67 Zoom interviews? Several themes have emerged, including one that he says upended any thought he had about the world returning to anything like what it was before. “If I was in doubt in March, I am no longer in doubt—this is a turning point,” he says. “I’ve learned that if we are waiting for after COVID, we are there. The world after coronavirus is a new world and we are now already inhabiting it. That, to me, is a pretty big deal.”

Lesson 1: COVID-19 is not just a crisis, it is a transformation. And it is already happening.

This is a truly global disruption. Whatever we were talking to them about, a large number of our experts said: “This changes everything. Forever.” The challenge is not to just wait out the pandemic, but to ready yourself for the transformations that are already happening in your field.

Lesson 2: Just like the disease itself, the world COVID-19 is creating most imperils those with “preexisting conditions.”

I cannot count the number of times a guest would say something like, “Things were already very bad,” and then list how those same maladies have now become critical, even existential, crises: Ann Marie Lipinski on journalism, Phil Baty on global higher education, Elizabeth Economy on US-China relations, Francis Fukuyama on the state of democracy.

Lesson 3: COVID-19 has forced a redefinition of world order.

Coronavirus has hastened a redefinition of global politics, especially US-China relations. There is now clearly a rift between the two superpowers. The question is whether a collision can be averted. Nearly everybody commenting on anything to do with global affairs described US-China relations as the critical factor for the future.

Lesson 4: There is hope amongst the experts that the enormity of COVID-19’s impact will force much-needed change.

Thomas Piketty, for example, talks about how this could force economic policymakers to tackle inequality because the alternatives are so dire. Ha-Joon Chang feels that it could shatter the myth of developing world helplessness and force developing countries to be less dependent on countries like the US and the UK, whose own performance has been so dismal. Sandro Galea hopes it will bring new attention to mental health. Even as many experts lament the lack of a multilateral response, they hold out hope that the crisis will highlight its necessity in the future.

Lesson 5: This is not a one-off. Everyone thinks of what COVID-19 has wrought, and immediately thinks of climate change.

Everyone is convinced that the next big thing we must all be looking at and preparing for is climate change. They think of what COVID-19 has wrought and immediately think of climate change. Everyone wants to remind us that we need to learn from this because the next crisis will come and it is likely to be climate.

For all the weightiness of the subject, the series is surprisingly accessible. Najam created it for the Pardee Center for the Longer-Range Future and credits the center’s communications specialist, John Prandato, with help in producing it. It’s easy to binge watch five, six, seven segments at a time. The interviews have all been edited down to five to six minutes.

“The less we know, the more time we take in saying it,” Najam says. “The more you know about what you’re talking about, the less words you need to say it.”

Najam doesn’t waste time during the interviews with idle chitchat. “I’m not the dean,” he says, explaining his style. “I’m the student. My questions are simple.” He asks each guest: What do you think will be the future of your field? What is your greatest hope and your greatest fear for your field in the post-COVID-19 world?

Lipinski, the Pulitzer Prize–winning former executive editor of the Chicago Tribune and the curator of the Nieman Foundation for Journalism at Harvard, says people will have to decide: “Do you care about having fact-based, credible, professionally reported journalism in your community? Just as this is a reckoning for journalists, it’s a reckoning for consumers of journalism, and if I can be so bold, for democracy.”

As for Najam, he sees “The World after Coronavirus” as a way of “demonstrating that the University is alive, even if classrooms are closed.” He plans to wrap up his Zoom interviews sometime this summer. “I call this my season of learning,” he says. “This series has made me feel like I’m back in college.”