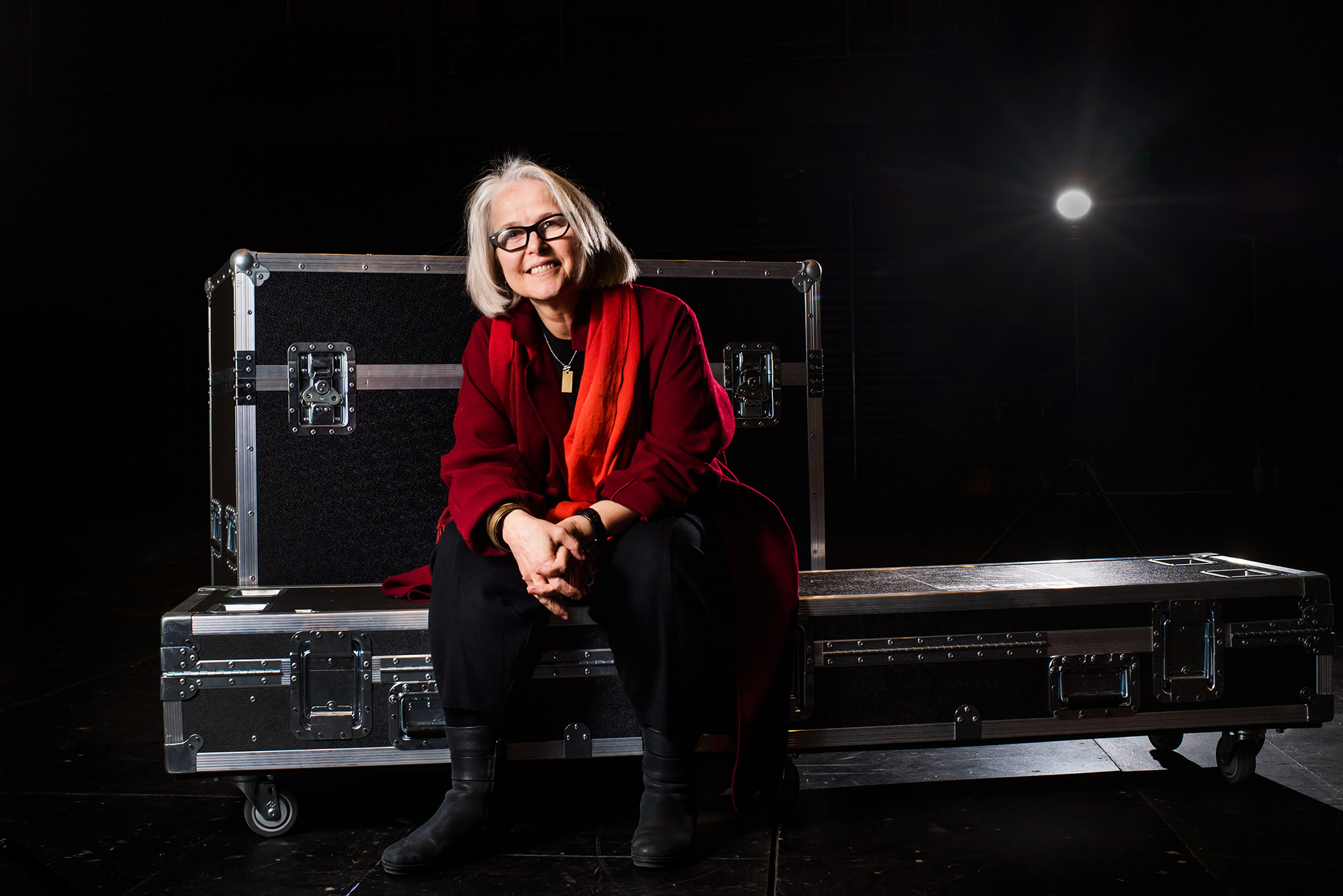 Susan Mickey, the new director of the College of Fine Arts School of Theatre, says she is particularly excited about the possibilities that the Joan & Edgar Booth Theatre poses for creating more community engagement. Photo by Jackie Ricciardi

Among her goals as director: more collaboration with Schools of Music, Visual Arts

Susan E. Mickey says you don’t really know what you’re going to find at a new job until you get there. Like when she arrived at the College of Fine Arts last summer as the newly appointed director of the School of Theatre amid major renovations…

“You don’t know the intensity of someone drilling into the side of your building until you live it every day,” she says with a smile. “Until you actually have that jackhammer in the wall and you’re all screaming to be heard over the noise and dust.”

But the scaffolding outside her fourth-floor office will soon come down, she adds, and “we’re about to emerge as a phoenix from the ashes into an absolutely beautiful building.”

What goes on inside that building, especially in her school, is already in excellent shape, says Mickey, who is also a professor of theater, design, and production/costume design. “The good news is what a healthy, vibrant, and lovely department it is, especially the faculty and the talented, talented, talented students.”

Before arriving at BU last July, Mickey was senior associate chair of the University of Texas at Austin department of theater and dance. Unlike many theater school administrators, Mickey is neither an actor nor a director, but a well-known costume designer who has worked with many of the nation’s major regional theaters, among them the Oregon Shakespeare Festival, the Chicago Shakespeare Theatre, Atlanta’s Alliance Theatre, and Boston’s Huntington Theatre Company. Her numerous accolades include three Joseph Jefferson Awards, Chicago’s top theater award, and in film and television she has worked on HBO’s Emmy-winning Miss Evers Boys and Mama Flora’s Family for CBS.

Mickey, who took over as School of Theatre director from Jim Petosa, a CFA professor of directing and dramatic criticism, spent the fall semester meeting with faculty and staff and seeing virtually every School of Theatre production—more than 20 shows. “I loved The Europeans, I loved Exonerated. I love the passion and fearless courage of our writers and our students to make their own work, too, and how devoted they are to seeing each other’s work. I went to performances on Sunday mornings at 10 am that were packed with students. That’s pretty impressive.”

She is now working with School of Theatre faculty planning next fall’s production schedule. (The full slate of shows will be announced as soon as it’s complete and permissions obtained.) But what she can say now is that the school’s annual Fringe Festival will include two operas and two plays by women, and alumnae, playwrights: Fade, a two-character play by Tanya Saracho (CFA’98) that was produced off Broadway in 2017, and Lettie, a family drama about a recovering addict and former prison inmate, by Boo Killebrew (CFA’03)—as well as a production of Christina, The Girl King by Michel Bouchard, all being staged at the Booth Theatre. The Studio One schedule will include Flyin’ West, a drama by Pearl Cleage about a group of African American women living in a frontier town in the West in 1898.

Setting the schedule early “will make a big difference in the way we teach the productions that we’re doing,” Mickey says. “We can incorporate them more into planning for the classroom.”

She waxes rhapsodic about the two-year-old Joan & Edgar Booth Theatre, inside and out: “That plaza has not been properly inaugurated. It’s just ripe for something,” she says.

She also hopes that the Booth will help pull in both the larger community (Brookline residents receive discounts on tickets) and those parts of the University that don’t often engage with the School of Theatre. “We need to become vital to the computer science student,” she says. “I am looking for ways for us to become a necessary part of every student’s education and their time here at BU, so they feel like they have to see what is happening at the theater.”

Among Mickey’s first initiatives was creating the On Set program, which brings guest artists to classrooms, studios, and public forums. She’s also instituted a student committee to advise her, in part because she won’t start teaching until next year, and “I missed those student voices,” she says.

I went to performances on Sunday mornings at 10 am that were packed with students. That’s pretty impressive.

“Susan impressed me from the very beginning as a very smart person who has an ability to think on multiple levels about how to lead a theater program,” says Harvey Young, dean of the College of Fine Arts. “Not only about curricular issues, but about cocurricular and extracurricular programs, such as the plays that are presented. And she understands what is happening in the world of professional theater in real time.

“All of those are necessary, not only for the future of the BU theater program, but also for our students to launch into the profession.”

Young and Mickey have known each other for years, both from annual gatherings of theater-school leaders and from when each worked in Chicago, he as chair of Northwestern University’s theater department, where he became familiar with Mickey’s “extraordinary” work on Chicago stages.

Since arriving in Boston, Mickey says, she’s tried to see as much Boston theater as possible, but her own theater career is taking a bit of a back seat.

“I wasn’t going to do anything this year,” she says, “but I am doing one show this summer at American Players Theatre in Spring Green, Wis. Aaron Posner is directing The Madwoman of Chaillot, so I’m going to do costumes for that. I think it’s important to keep your hand in professionally if you can, but I have to figure out how much time I have. I finished my sketches over the holiday break.”

Does being a designer affect the way she plans to oversee the School of Theatre? “I do tend to approach things like they are a large design problem,” Mickey acknowledges. “Researching, listening, digging deep into the meaning, then coming up with the Big Idea or concept, then implementing with a high degree of detail and care and collaboration with the creative team.”

“Having all three in one building is a unique asset for BU,” Mickey says. “You open a door and you never know what you’re going to get. Right now it might be four guys in hard hats with a jackhammer, but sometimes it’s somebody with a bassoon. I think that kind of proximity is golden, and I really plan to mine that a lot.”