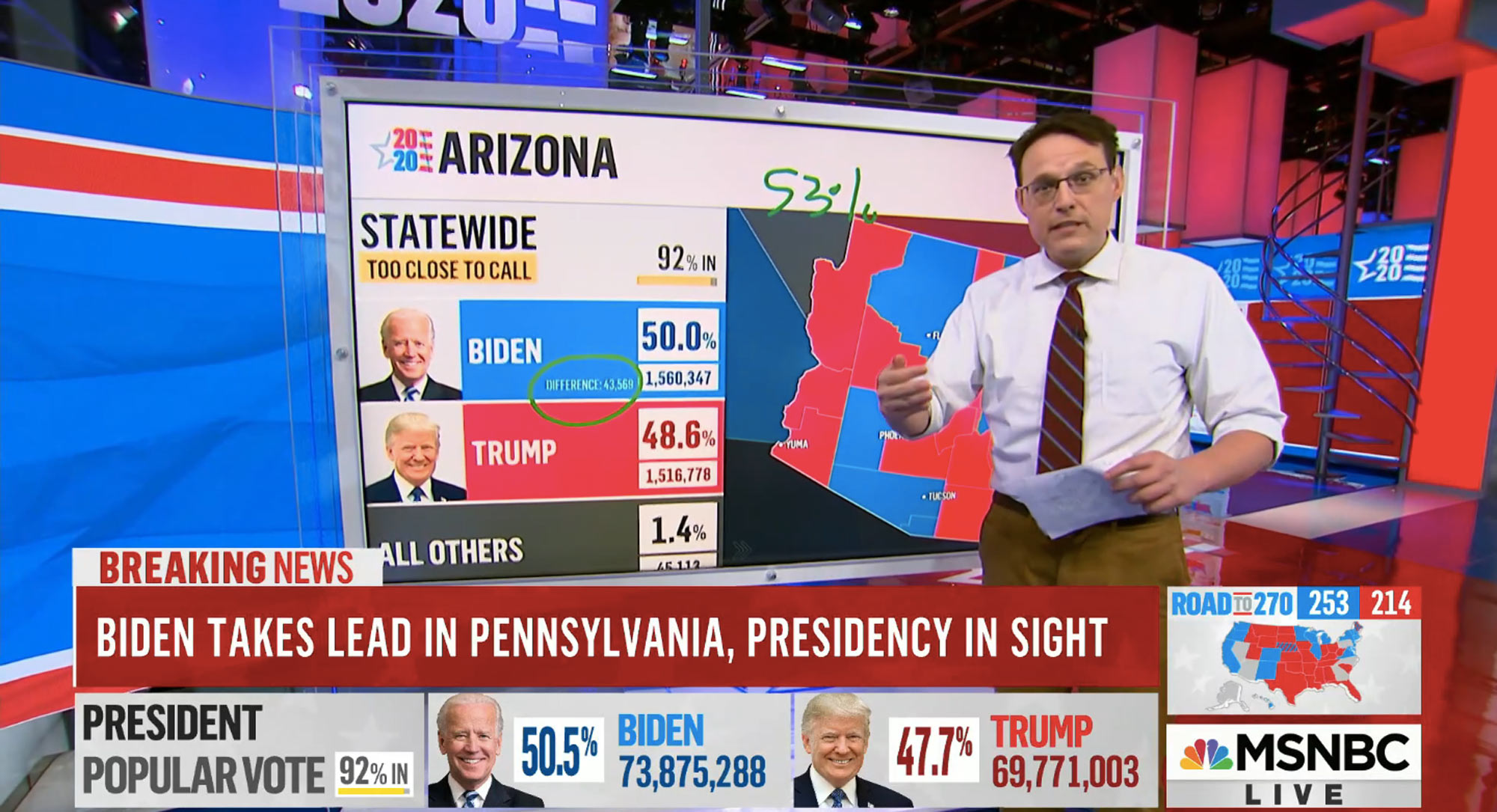 MSNBC political reporter Steve Kornacki deserves a nap. Throughout Election Night and the five days that followed, the College of Communication alum stayed steadfast as he commanded the cable channel’s “big board,” reeling off the latest electoral returns, fueled by Diet Cokes and surviving on little sleep.

The high-energy numbers guy used his finger to zoom in and out of battleground states, his scrawl barely legible, as he came up with possible scenarios that could flip the scales in favor of Biden or Trump. With a swipe of his finger, he called up stats on various candidates, previous races, census data, and incoming election results.

Twitter took notice and #TrackingKornacki and #ChartThrob went viral with a corresponding emoji and celebrities like Chrissy Teigan showing concern over how hard he was working. New York Magazine even pinpointed the brand of his signature khakis (the Gap, it says). Fans started tweeting fun facts about him, like how he vacationed in the greater Columbus area in 2018 so he could study Ohio’s 12th Congressional District on the ground.

TV critics also were in awe of Kornacki’s dedication. “To be sure, every network thinks their ‘map guy’ is the best,” writes Washington Post media writer Jeremy Barr. “There’s Bill Hemmer, who handles the ‘Bill-board’ for Fox News. CNN’s John King, perhaps the cable news personality most associated with those big interactive maps that have become election night staples… But Kornacki’s colleagues, like many viewers on television, have been particularly effusive in praising his persistence, passion, and stamina.”

Kornacki (COM’01) began Election Day with an appearance on the 6 am broadcast of Morning Joe and didn’t take a break until noon the next day. He was a mainstay on the network for the remainder of the week and shared a video thanking his fans:

The Groton, Mass., native studied film and television at BU and first emerged as a network star during the 2016 presidential election. Since then, he has earned a following for the way he makes the nitty-gritty details of the electoral process fun to watch. He is often lauded for his more cautious view, for not trying to be the first to report, and for how he provides viewers with historical insights by comparing what’s happening today to similar events in previous elections.

When speaking with COMTalk in March, Kornacki even seemed to have his hands on a crystal ball: he expressed concern that the reporting of votes is taking much longer in some states than it used to. “Significant delays in reporting results, it seems, feed doubts among voters about the fairness and integrity of the process, even when there is nothing sinister going on,” he says in the piece. “It’s indicative of the era, in the sense that we keep encountering situations where people say, ‘I’ve never seen something like this before.’”