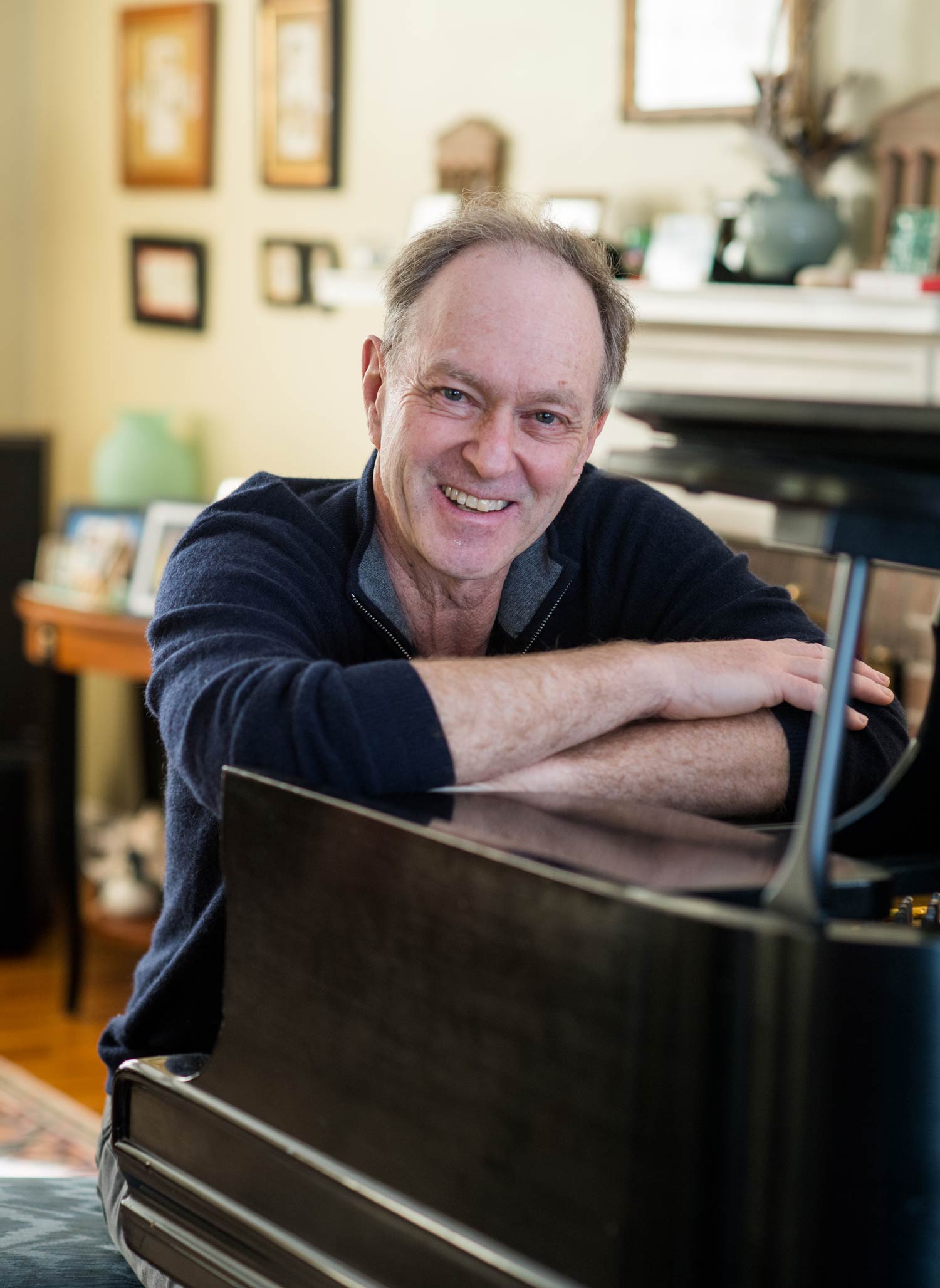 John Finbury (CAS’77) composed the Grammy-nominated album Sorte! at the piano in his Andover, Mass., home. Photo by Cydney Scott

He is a 67-year-old lawyer, a partner in the Haverhill, Mass., firm his father founded. But on Sunday he’ll be at the Staples Center in Los Angeles, waiting to hear if Sorte! Music by John Finbury wins the Grammy Award for Best Latin Jazz Album, a category pitting it against work by Chick Corea, Wynton Marsalis, and Rubén Blades.

“I’m among gods!” says John Finbury (CAS’77), shaking his head at the unlikeliness of it all. “The easy answer is that music is the universal language, right? No matter where you’re from, you don’t have to speak the same verbal language to play with anyone in the world or compose in the style of others.”

Finbury is the first to admit the melodies he composed on the Steinway piano in his Andover home are only part of the album’s success. Producer Emilio Miler rounded up the crack band of mostly Latin musicians and vocalist Thalma de Freitas, a household name in Brazil, who wrote lyrics in her native language and sang them on the album. Their collective effort won the approval of the Recording Academy, which awards the Grammys.

“It’s really heartening,” Finbury says. (Technically, only the performers are Grammy nominees.) “The other day I was actually listening to my own Pandora station, right? And Sorte! came on, followed by João Gilberto doing António Carlos Jobim’s Wave, one of my favorites, an inspirational song for me. And I thought: to be in the same genome with artists I admire like that.”

Sorte means “luck” in Portugese. But if the Grammy nod seems like a random stroke of good fortune, think again. It’s not Finbury’s first nomination in Latin jazz. He was nominated for Song of the Year for “A Chama Verde” back in 2016.

The story, though, really begins several decades ago with Finbury’s parents, both music lovers—that’s his father’s Steinway—who always had the hi-fi playing in their Haverhill living room. Think back to the 1960s, when artists like Gilberto Gil and Jobim brought warm breezes from Copacabana Beach wafting into the American mainstream. Finbury was 10 or 12 when their sambas and bossa novas caught his ear—and never let go.

“I liked it,” he says. “And when I began playing jazz more seriously, maybe 15 years ago, inevitably we ended up playing ‘Black Orpheus’ and Jobim songs.”

Finbury was mainly a rock drummer in high school and started playing classical piano seriously at Middlebury College. He spent a year studying piano in Paris, came back to the Longy School of Music, got a bachelor’s degree as a music major at BU’s College of Arts & Sciences, then tried to make a career of music. He composed a well-received score for a friend’s WGBH documentary about one of the last strip joints in Boston’s Combat Zone and tried to earn a living as a rock and R&B songwriter. “I took a shot and it didn’t happen,” he says with a shrug. He and his sister also ran a Salem music venue that booked artists like Bonnie Raitt and Richard Thompson. He even married a singer, Patty Brayden.

Eventually, suspecting that fame and fortune were not in the offing, he switched tracks, went to the Northeastern University School of Law, and after three years working in Boston, joined his father’s firm. He still spent time at the piano daily, and in the early 2000s, he and Brayden began hosting Sunday jam sessions at their Andover home. Eventually they put together a band, Day for Night, a five-piece combo with Brayden on vocals, and played around the area for a decade or so, with a repertoire of jazz, blues, and the Great American Songbook.

Finbury started writing songs again around 2005. A few years ago he got back into the Brazilian sounds, encouraged by composer friend Ned Claflin, who spoke Portugese and agreed to write lyrics. Eventually he decided to record at a friend’s home studio with Brazilian singer Marcella Camargo, recruited from Berklee College of Music. It was Guatemala native Ricardo Monzon, a Berklee percussion professor who plays with the Boston Pops, who got him to the Grammys, Finbury says, after Monzon played on the session for “A Chama Verde.”

“He said, ‘You should submit this for the Latin Grammys,’ and I dismissed it: ‘Right,’” Finbury says, shaking his head. “And he grabs me by the lapels and says, ‘No, listen, it’s good, you should submit this!’” So he did, even though the song had an underwhelming 149 views on YouTube at the time. “And lightning struck.”

He didn’t win, but the nomination brought him a call from veteran Latin musician and producer Miler, who lives in Argentina and often comes to the United States to work.

“Even without knowing the guy, it was easy to see it was an American or at least English name behind a song in Portuguese, so that drew my attention,” the producer says from Buenos Aires. “But it was also the fact that besides the name-language conundrum, most of the Song of the Year nominees tend to be both well-known songs and in Spanish. This was neither. So I was beyond curious, even before listening to a single note.”

People think I’m against type, but for me it feels very natural.

A friendship that began over email developed into a collaboration that became Sorte! Miler connected Finbury and de Freitas and rounded up a crew of ace Latin musicians at New York’s storied Power Station Studios at BerkleeNYC on two days months apart in 2018.

“John has a gift for composing melodies that sound amazing when sung,” Miler says. “Not to downplay the quality of his instrumentals, but the melodies both flow and breathe very naturally, and that makes them easy to embrace for singers and listeners alike. Besides that, his command of the harmonic vocabulary of jazz is aided by his classical training, so that he can lead you into bold dissonances while making you feel that that was the most natural point of arrival.”

As Finbury says, “People think I’m against type, but for me it feels very natural.”

And, at least with his Brazilian jazz tunes, Finbury’s mastery of the genre makes his six tunes fit beautifully with de Freitas’ lyrics about serendipity, love, prayer, and “tropical surrealism.” He credits her with much of the album’s success, both for her voice and her words.

“The lyrics rhyme in Portugese, but they don’t rhyme when you Google Translate them,” he says with a laugh. “I learned: don’t bring your Middlebury Freshman Poetry 101 standard to a translation of a Brazilian lyric. Trust your artist and let go. And the more I spend time looking at her lyrics, the more I am impressed by how personal and good they are.”

Finbury has been focused on his songwriting, he says, keeping to a vow of writing one keeper a month, some in Latin modes, others in the Great American Songbook and in other styles. Off his Grammy successes, he has another Latin album coming and a bunch of other projects in the works.

And while Finbury’s demographic profile and law career initially sparked his curiosity, Miler says that knowing him makes his success with the music easy to understand.

“John still has a passion for justice and as far as I can tell seems to enjoy the process that leads up to trials and sentences, which isn’t that detached from the passion and commitment I find in him as a composer,” Miler says. “He’s indeed a very unique, surprising character…and I feel privileged and honored to continue to make music with him.”

One last fact: Finbury has never been to Brazil or anywhere in South America, “although I’m going next year. Thalma made me promise. She’s been performing Sorte! with her band this summer, and she says, ‘I want you to see that.’”

In some ways the distance between Haverhill and Rio de Janeiro doesn’t matter anyway, Miler says: “There are, in fact, snowy places in Brazil, too.”

There are 2 comments on He’s an Unlikely Grammy Honoree. Again.