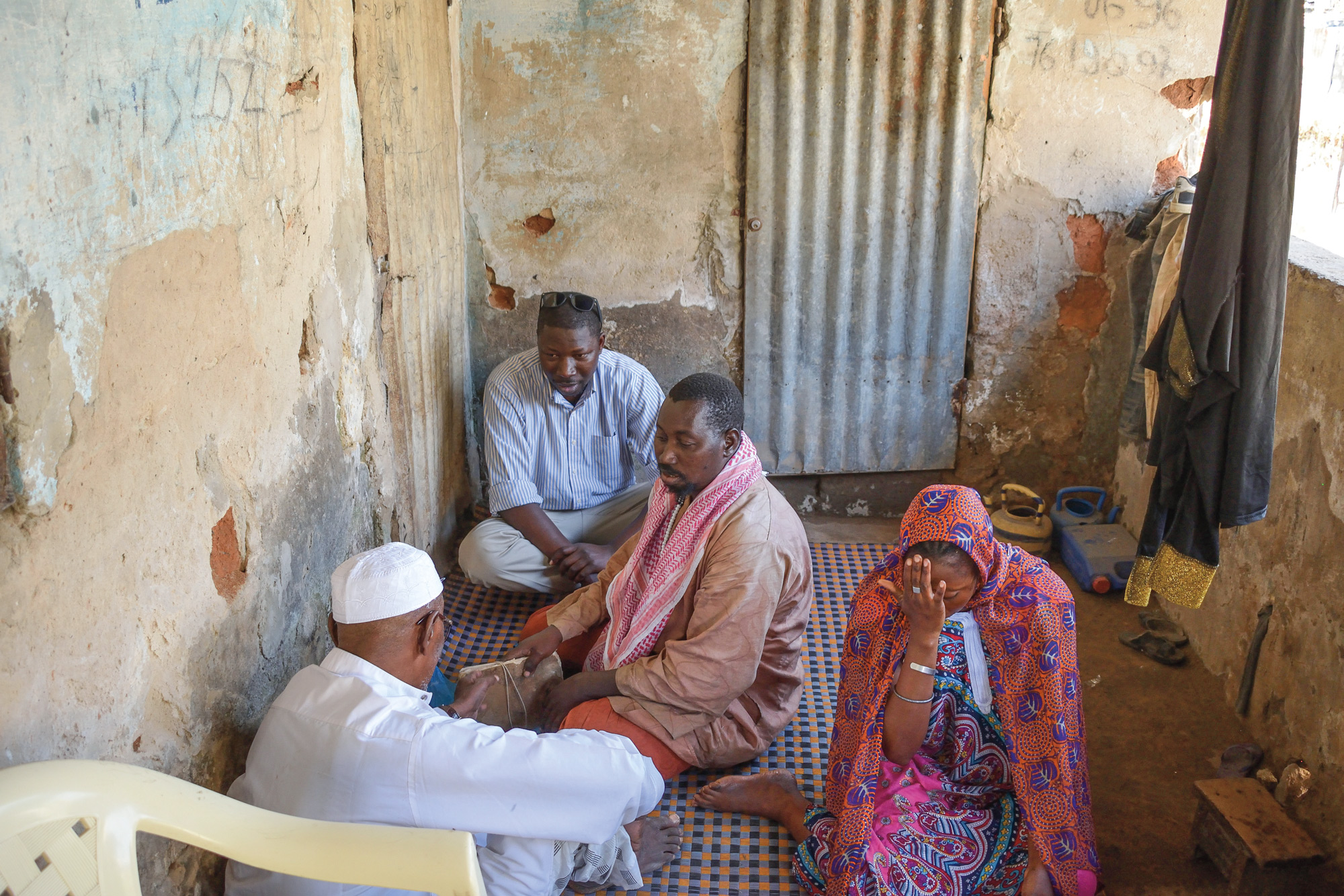 Fallou Ngom (rear) is digitizing thousands of texts written in the Ajami script. Here, he sits in the home of a manuscript owner in Belfort, Ziguinchor, Senegal. Photo courtesy of Ibrahima Ngom

That script, Ajami, is still flourishing; people throughout Africa use it to write phonetic renderings of about a dozen languages, including Swahili, Wolof, and Hausa. But because texts written in Ajami are often passed down through families where they can be lost over generations, many are inaccessible to scholars, few of whom can read the script anyway. Those who know about Ajami texts often dismiss them as mundane, with little scholarly value. Ngom, director of Boston University’s African Studies Center, disagrees. He is digitizing more than 18,000 of these indigenous texts—including those in Ajami, Arabic, and Ajami-Arabic—and making them widely available to offer scholars new insight into African history, literature, culture, medicine, and everyday life.

The BU College of Arts & Sciences professor of anthropology partnered with the West African Research Center in Dakar, Senegal, on a 15-month project funded by the British Library’s Endangered Archives Programme. Ngom gained access to the documents through an elder in the Casamance region of Senegal who helped him compile a list of locals with Ajami manuscripts. The elder made introductions and facilitated approvals for the research team.

“Thanks to him, we were able to create a network of over 100 people who were willing to share their material with us,” says Ngom, who knows 12 languages and serves as a linguistic forensics expert in asylum cases. These documents range from religious texts to medical diagnoses, advertisements, love letters, business records, contracts, and writings on astrology, ethics, morality, history, and geography. Ngom collaborated with Eleni Castro, OpenBU and electronic theses and dissertations librarian, to digitize each document and compile metadata drawn from interviews with the owners of the texts. These are available in the African Ajami Library, an open access archive hosted at BU.

“It’s human knowledge,” Ngom says. “It’s everything. And it’s a grassroots tradition. They’re handwriting these materials, making copies, and sharing them in the community. In many cases, this is the only form of literacy they have. So that’s what they use to document their lives.” The texts reveal “the interests of these people, their preoccupations.”

These everyday interests and writings expand scholars’ comprehension of the region’s people beyond the history and traditions emphasized in postcolonial literature, which Ngom says gave “the false impression that only oral traditions exist in sub-Saharan Africa.” In Senegal, the official language is French, in which only half of the population is literate; French literacy is restricted to a minority educated group in urban areas. The absence of Ajami in the history of sub-Saharan Africa “makes invisible centuries-old traditions of producing knowledge.”

Under Ngom’s leadership, BU offers the only Ajami program in the United States. “Our students are the first generation who are able to read these documents, and have access to these resources,” he says. African studies students are helping Ngom and his colleagues to develop classroom materials, and are learning to teach Ajami. Through this work, “we are beginning to address this fundamental flaw in the training of a new generation of Africanists,” Ngom says.

With support from a National Endowment for the Humanities Collaborative Research Grant, Ngom and his research team are also expanding the Ajami database, transcribing, translating, and digitizing more manuscripts. Their work will be published in the journal Islamic Africa and a selection of the manuscripts will be accompanied by video recordings of the owners reciting the texts.

This work is not only important to scholars and historians, Ngom says. In the absence of a public depository for Ajami texts, the African Ajami Library is conserving family histories. This hits close to home for Ngom, who says that he has returned to Senegal on more than one occasion to find that the owner of a manuscript archive he’d been working on had passed away. “Clearly, if we had not recorded the documents of that person, the materials may have been lost,” Ngom says.

“This highlights the urgency of this work. We return to those houses and present our condolences and show the families what we have collected. We bring flash drives for them. Every time I go into the field, I feel privileged.”

There are 6 comments on Digitizing Ajami, a Centuries-Old African Script