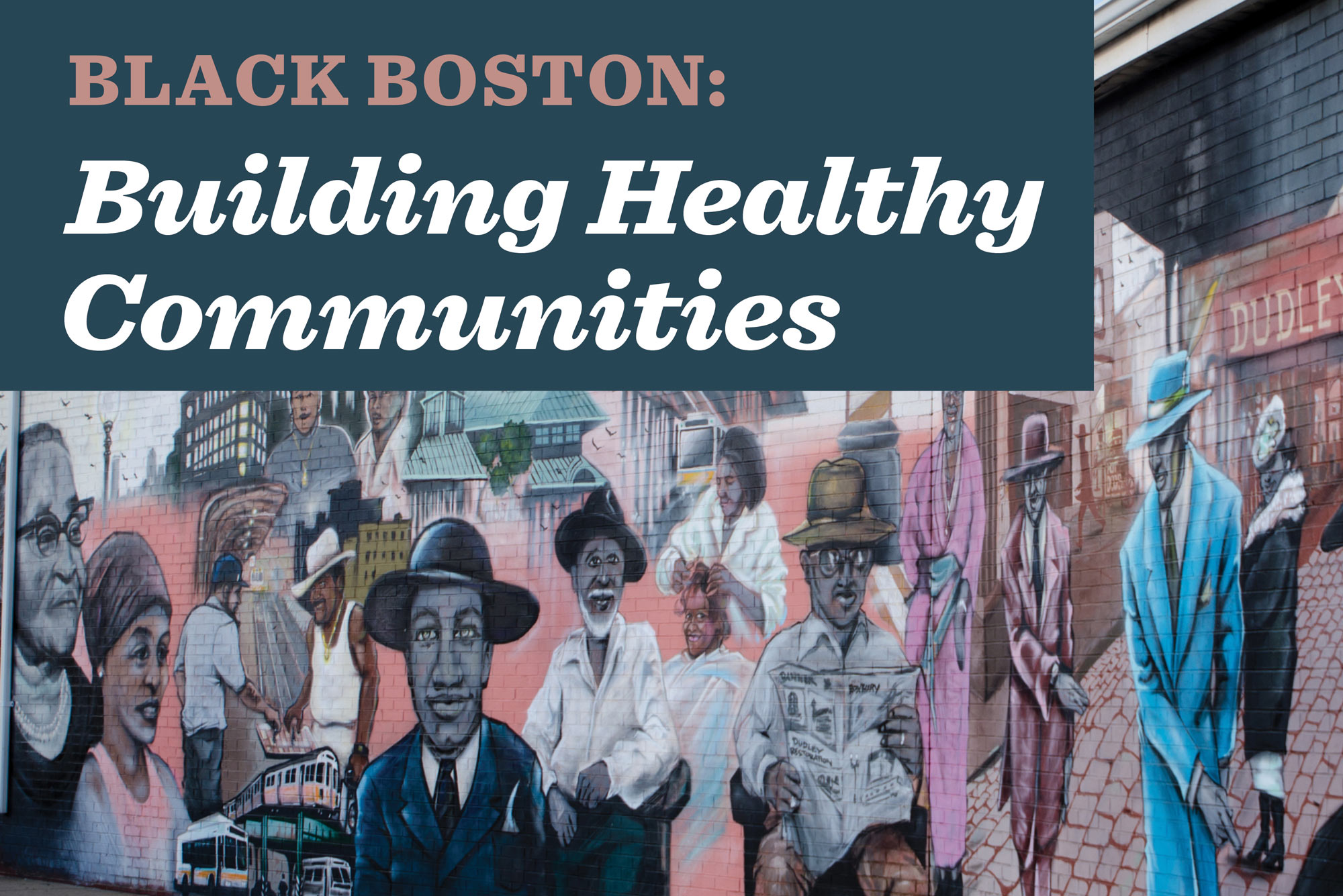 The July 30 virtual panel on Building Healthy Communities kicks off the Black Boston series, featuring transformative Black leaders from across the city. On the event poster is the Faces of Dudley mural by Mike Womble and the Mayor’s Mural Crew at 2385 Washington St., Boston. Photo by Douglas Darrah, Institute on Cities

The health gap for communities of color gets a hard look Thursday in a new virtual discussion series called Black Boston, intended to showcase transformative Black leaders in the city and the issues that drive them.

“We are going to talk about disparities in investment, in healthcare, in the availability of healthy food, all of which contribute to disparities in health,” says Yvette Cozier (SPH’94,’04), a School of Public Health associate professor of epidemiology, who will moderate the July 30 panel, titled Black Boston: Building Healthy Communities, the first in the series hosted by the BU Initiative on Cities (IoC), the BU Office of Diversity & Inclusion (D&I), and WBUR CitySpace.

The free event begins at 5 pm and will feature Vivien Morris, founder and chair of the Mattapan Food & Fitness Coalition, Sandra Cotterell, CEO of the Codman Square Health Center, and Thea James, a School of Medicine associate professor of emergency medicine and Boston Medical Center vice president of mission.

The goal of the series is to examine Boston’s progress toward inclusion, equity, and opportunity and the ways that it has fallen short. Over the next four months, future panels will focus on journalism, politics, and arts and culture (dates TBA).

“We wanted to create a series that would both celebrate Black leadership in Boston and help better understand how far we’ve come and how far we still have to go,” says Katharine Lusk, IoC codirector. “We wanted it to be both a celebration and a critical assessment.”

The subjects of the four panels are “integral to the conversations that are happening related to the experience of Black citizens in the country,” says Alana Anderson, D&I programs director, “and to a new understanding for a lot of people of race and racism and antiracism in this country.”

Anderson says it is both “important and necessary” for the series to highlight “Black leadership, content creators, and innovators,” and Lusk agrees. “It’s incumbent on all of us, when we have a microphone,” she says, “to think about who you invite to that mic and whose voices we are elevating and who our students—who Boston—is hearing from.”

Black Boston was originally intended to be a series of live panels at CitySpace, leading up to the NAACP convention planned for Boston in July, but both were derailed by COVID-19. After a brief pause, the killing of George Floyd and the protests that followed, in Boston and elsewhere, made clear that it was time to reschedule the conversations as virtual, says Alex Schneps (CGS’10, COM’12, CFA’19), events and programming manager at WBUR CitySpace, which is producing the series.

“These conversations are always relevant and the issues didn’t go away just because COVID swept everything else under the rug for a while,” Schneps says, and that the production for the webcasts will be “robust and visually unique,” and not the now-familiar Zoom interface.

Cozier outlines the history that has shaped health outcomes for Black communities in the city.

“As a native Bostonian, I’ve seen Boston on a continuum,” she says. “From the 1960s, when neighborhoods were less segregated, through becoming increasingly segregated, before busing, with the redlining that went on. And then busing was the nail in the coffin.”

It was not just the segregation, but other changes that accompanied it that affected community health, she says. Investment disappeared. It was easy to open a corner store or a liquor store, but the kind of supermarkets common elsewhere began to disappear.

We wanted to create a series that would both celebrate Black leadership in Boston and help better understand how far we’ve come and how far we still have to go.

In the Mattapan Square neighborhood, she says, “you used to be able to walk to the Purity Supreme supermarket, and then it became a church, which is great, but when you needed groceries, it wasn’t terribly helpful. You needed a car to go somewhere else, to go to a store in someone else’s community that employed their community members, and spend your money there. You did not get to employ the kids in your community bagging groceries, because there wasn’t a grocery store. This is how the community began to fray.”

And when there is no supermarket, people’s shopping choices change, Cozier says. Traveling to another part of the city to shop is costly and time-consuming, especially when you have to haul your groceries home on a bus. “You’re not likely to buy a lot of fresh food because it’s not going to last long for the labor you have to put in to go get it. So you get a lot of canned things and a lot of processed food that might be shelf stable and last until you go again. Or you stay in the neighborhood and choose from what’s available, the poor choices you’re given.”

Healthcare access similarly changed. Small hospitals and other facilities that were once spread across the city closed, leaving poor communities with only neighborhood health centers and making a trip to Boston Medical Center necessary for anything serious. Thus, people might postpone visiting a doctor, which means a prescription wouldn’t get written.

The COVID-19 pandemic that pushed the Black Boston series online has also highlighted the economic, social, and racial disparities it intends to examine, Cozier says. Anderson notes that the closing of Boston public schools and the switch to virtual education during the pandemic has meant that many children in those communities are losing access to two fresh, healthy meals every day.

The pandemic “has shown us that there’s a distinction between those who are the highly educated essential workers—the nurses, the trauma surgeons—versus the people who work between them cleaning the emergency rooms,” Cozier says. “While one group can jump in their cars and head home to quarantine at a safe social distance, the other is taking the bus home to an often crowded, multigenerational home.”

“It’s no surprise,” she says, “that where we’re seeing the greatest impact of this virus is on people who are unable to practice what so many of us take for granted.”