Watch highlights from the 2019 Women’s Beanpot Championship game, which the Terriers pulled off, 3-2, in sudden death overtime. Video courtesy of BU Athletics

On a power play, junior forward Sammy Davis slammed home the puck from a short distance away to give the team the 3-2 win, sending fans and players into a wild celebration. Davis (CGS, Sargent) was named the tournament MVP.

The No. 7 Terriers, under head coach Brian Durocher (Wheelock’78), entered the tournament gunning for their first Beanpot title as a varsity squad. Their only previous Beanpot championship came in 1981, when they were still a club team.

“Needless to say, we’re all excited that monkey’s off the back,” Durocher said after the game. “It’s been a long time coming, and I couldn’t be prouder of the team.

“Tonight, winning in a big game, a big stage is super-important,” he said. “Now these kids get a taste of winning something big…the confidence is the biggest thing that goes forward.” 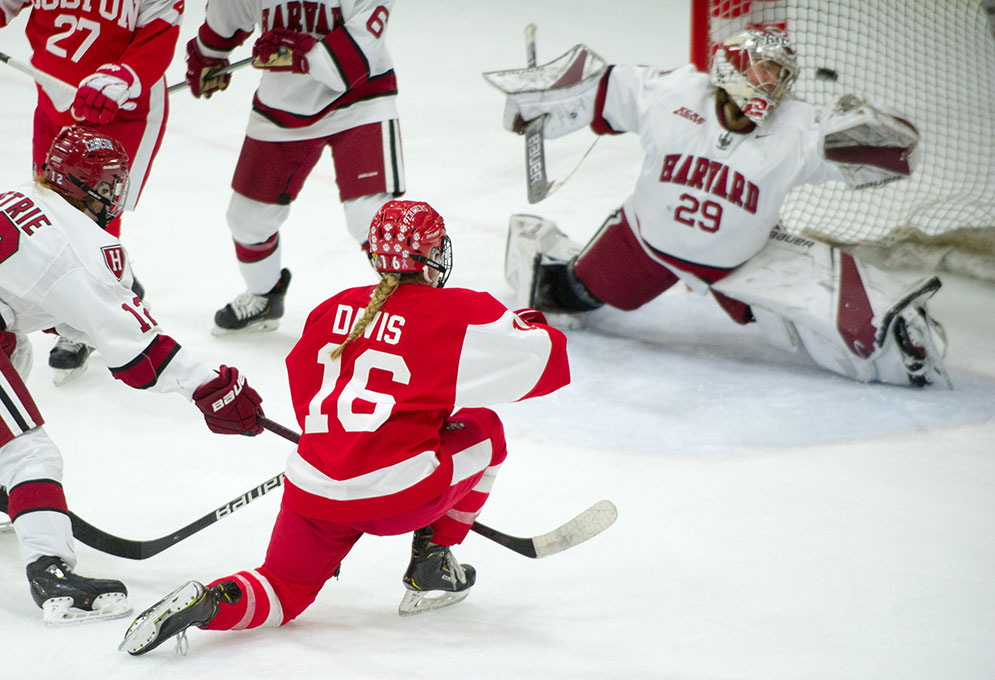 Asked what was going through her mind as the shot rang home, Davis wasn’t quite sure. “I kind of blacked out,” she said with a smile. “The coach had told us to try to get down close. So I snuck down there, Jesse found me, and I kind of ripped it.”

She said the team had been talking about winning the tournament “for the ladies of the eighties” as well as for the players who’ll come after them.

The sudden death period was marked by wild swings and a flurry of what seemed to be a half-dozen brilliant saves by Terrier sophomore goaltender Corinne Schroeder (Sargent) just moments before a roughing penalty against Harvard center Lexie Laing sent BU on what proved to be the winning power play. Four of the game’s five goals were scored on power plays.

Schroeder “was a brick wall there. If she didn’t make those stops, I don’t think we’d be hoisting the trophy,” Davis said.

The contest began with a first period marked by freewheeling back-and-forth action, more of it in the Crimson end, with BU freshman Courtney Correia (CGS) and junior Natasza Tarnowski (Sargent) leading the charge into the corners for the Terriers. There were close calls in both directions, including a shot by sophomore Jesse Compher (CGS) that rang off the crossbar behind Harvard goaltender Lindsay Reed. But all the scoring came in the last two minutes of the first period—and on power plays.

Harvard’s Laing was sent off for tripping Compher behind the Crimson goal at 17:27, and 61 seconds later Terrier senior defender Reagan Rust (CAS) scored on a shot from the point, off the stick of Harvard’s Kara Willoughby, with assists going to junior Abbey Stanley (CAS) and Tarnowski.

The excitement was short-lived for Terrier fans though. At 19:13 sophomore Kristina Schuler (CAS) was sent off for holding, and 21 seconds later Harvard defender Kaitlin Tse flipped a wrist shot through a crowd in front of the BU net and past Schroeder to knot the score at 1-1 going into the first break. A video review confirmed the goal.

The penalty kill proved BU’s downfall again in the second period after Schuler was sent off once more, this time at 15:26 for crushing Jovanovich into the boards. Harvard’s Kristin Della Rovere fed Laing in front of the Terriers net for another goal and a 2-1 Harvard lead. Yet another Schuler penalty, this time for tripping, gave Terrier fans cause for worry, but this time the penalty kill was valiant, including two big plays by junior Breanna Scarpaci (Sargent) to shut off Crimson moves.

The Terriers laid siege to the Crimson goal repeatedly for the rest of the period, at least twice keeping the action in that end for more than a minute, and finally, with 4:32 to go in the period, Tarnowski managed to tap a loose puck home. It appeared to go off her skate and stick before barely crossing the goal line, but a long video review by officials validated the tying score. Junior Abby Cook (CGS) got the assist.

A wide-open third period, with several hits that could have drawn calls but didn’t and plenty of crease-crossing shots, resulted in zero scoring. Harvard did take two penalties—Hallett went off for a high stick and also filled the box on a team penalty for too many skaters on the ice. By the end of the period, BU had more than twice as many shots on goal as Harvard—47-23—but the score was knotted. 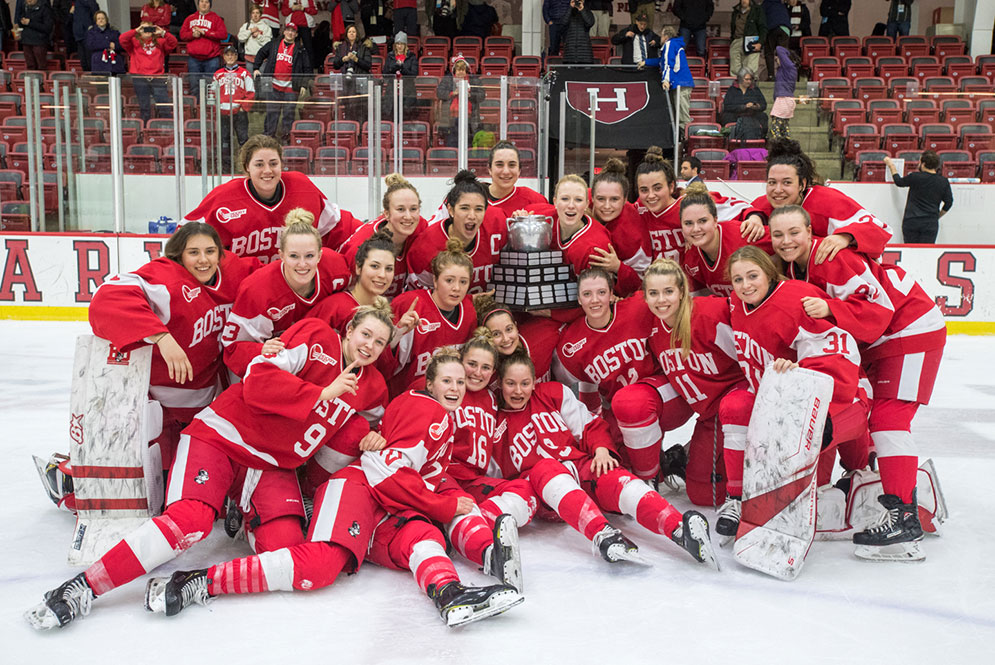 The Harvard arena often felt like home ice for the Terriers as the BU Pep Band and a boisterous Dog Pound led by mascot Rhett the Terrier out-cheered the Crimson fans.

“I’m glad the Dog Pound is here, the team really gets a lot of energy from it,” said sophomore Abby Kelley (COM, CAS) as the game continued.

“We’re so grateful, we love our band, we love their support,” Davis said after the game.

“We’ve been coming to these games for years—terrifying and exciting at the same time,” said Drew Salad (Wheelock’15), summing up the anxiety many Terrier fans were feeling entering the final period.

Coming into the title game, the Crimson led among the four tournament teams, with 29 championship appearances and 14 titles. Harvard had won four of the last five go-rounds with the Terriers, but BU has been playing significantly better hockey lately, including a big 7-1 win over Holy Cross last Saturday.

The Terriers had advanced to the final by upsetting No. 3 Northeastern, 4-3, in last week’s semifinal, a wild game that saw three periods and an overtime end in a 3-3 draw before BU won in a shootout. Harvard beat BC, 4-1, in the other semifinal game.

Harvard’s Reed won the Bertagna Award for best goalie of the tournament.

In Tuesday’s Beanpot consolation game earlier in the evening, BC beat Northeastern, 4-1.