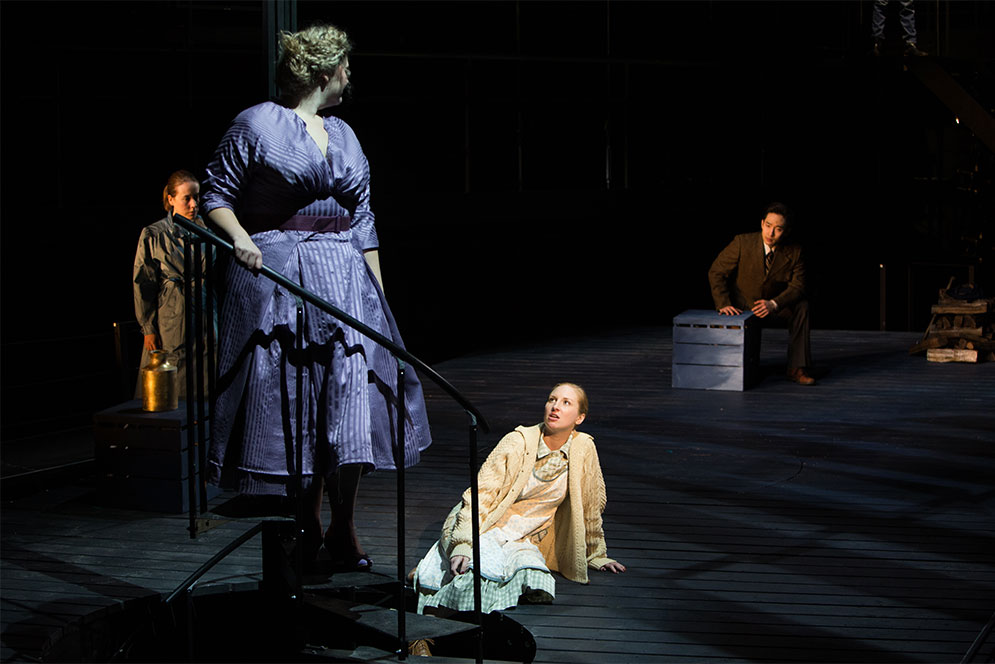 Murder, dementia, domestic abuse, a broken family—Stephen King’s novel Dolores Claiborne has all the torment and passion of any tragic opera. Composer Tobias Picker thought so, too, and in 2013, he turned King’s best-selling psychological drama into an opera, with a libretto by J. D. McClatchy.

Now, a chamber version of Picker’s opera, co-commissioned with the BU Opera Institute, opens this Thursday at the Joan & Edgar Booth Theatre.

“It’s about humanity at its most challenged, and I don’t want to say depraved, but certainly its most raw,” says Dolores Claiborne director Jim Petosa, a College of Fine Arts professor of directing and dramatic criticism and School of Theatre director.

Picker’s operas have been produced to critical acclaim by such respected companies as the Metropolitan Opera, the Santa Fe Opera, and the San Francisco Opera. But the Opera Institute remains at the top of Picker’s list.

“They’ve done some of the best productions of my operas that have ever been done,” Picker says. “The Thérèse Raquin they did is, I think, the most extraordinary production of any opera of mine that I’ve ever seen, anywhere.” 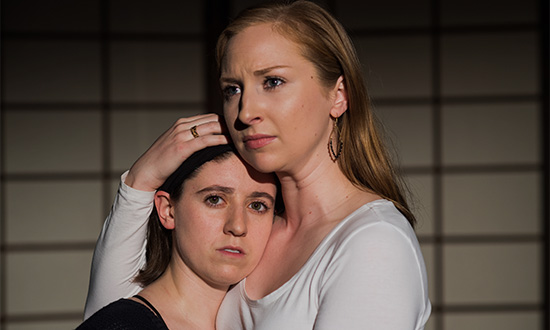 In addition to that 2009 staging, the institute, led by artistic director William Lumpkin, a CFA associate professor of music, opera, mounted a critically praised production of Picker’s Emmeline in 2017. Now, along with the Schools of Music and Theatre, it’s adding a third Picker work to its repertoire, staging the New England premiere of the Dolores Claiborne chamber version. Lumpkin again conducts the orchestra.

The opera, with two casts, will have four performances and run Thursday through Sunday at the Joan & Edgar Booth Theatre. As is typical with productions at the Booth, the producers are pushing the envelope and using the venue’s capabilities to maximum effect. Not to spoil anything, but the Dolores Claiborne opera will take audiences to new depths—literally.

“This new theater says, ‘What are you going to do with me?’” according to Petosa. “This space inspires us to find new dimensions of the play and make it a 21st-century production, and that has been really fun.”

Picker’s Dolores Claiborne premiered in its original version at the San Francisco Opera in 2013. And although King might seem an unlikely source for an opera, Picker says, people who think of him as only a horror writer are missing what an extraordinary storyteller he is. This piece is a grimly realistic tale of family, an unhappy marriage, and murder on an island off the Maine coast, and Picker compares it—loosely—to Puccini’s Tosca in its tale of a woman who kills for an understandable reason and the price she pays. (The novel was later made into a film starring Oscar-winner Kathy Bates in the title role.)

The themes are consistent with ones Picker has explored in other works, Petosa says. “The questions he’s asking turn out to be moral questions and unexpected in terms of how you feel toward people living out very questionable choices.” 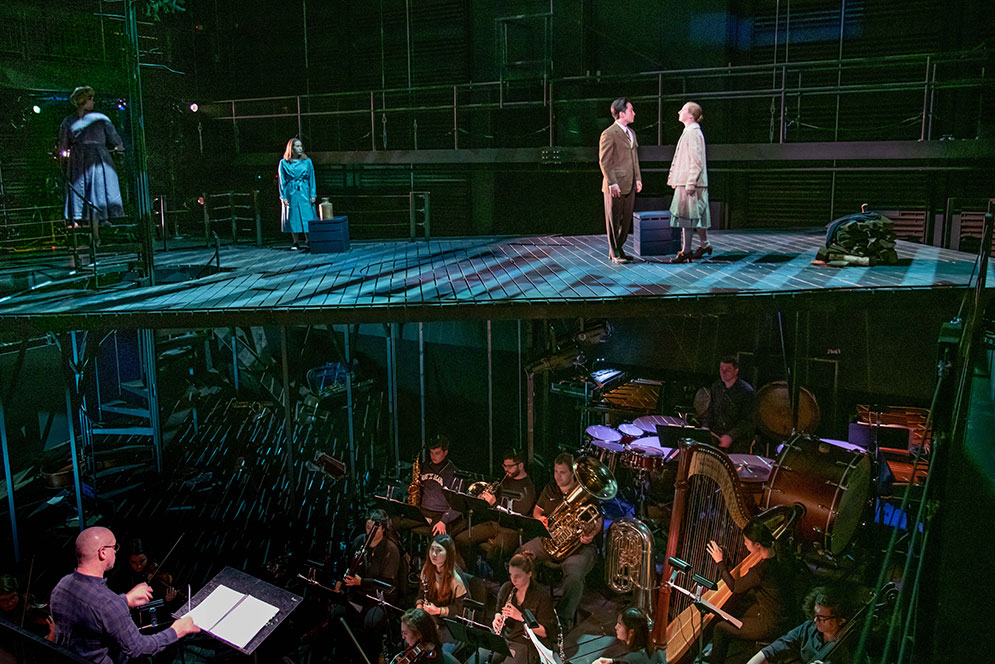 The Booth Theatre’s capabilities are being tested once again in the BU Opera Institute’s New England premiere of a chamber version of Tobias Picker’s opera Dolores Claiborne, running February 21 to 24. Photo by Andrew Brilliant

Picker visited BU during the production of Thérèse Raquin, and “we struck up a very strong and friendly relationship,” Lumpkin says. “When we programmed Emmeline, he came back and was really ecstatic about the work.” So when there was talk of a pared-down chamber version of the Dolores Claiborne opera, the Opera Institute was invited to be a co-commissioner with New York City Opera and Schott Music. The chamber version premiered at New York City Opera in 2017.

With smaller orchestras and casts, opera chamber versions provide an opportunity for smaller theaters and companies, with limited budgets to mount operas, to tackle pieces they wouldn’t have the resources to do in a larger version. But in this case, Picker says, the chamber version is “much more powerful and compelling than in its grand opera version, which I think was unnecessarily grand.”

The chamber version is especially well-suited to the Opera Institute’s needs—teaching very advanced students requires material that demands a lot of them, both musically and dramatically. “So while in some ways the grand versions of these stories can be fun to do,” Petosa says, “they’re sometimes less potent as teaching tools. Here you have five actors in each cast, and each one of them has to fulfill some pretty substantial musical and dramatic demands.” 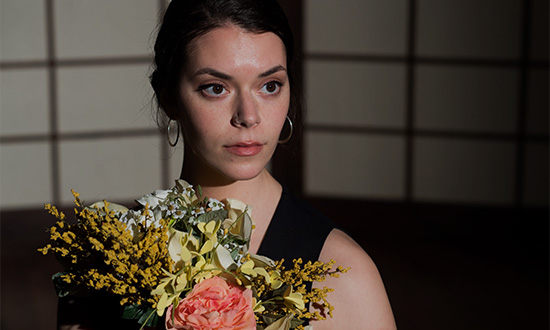 In this video, CFA grad student Rebecca Printz, who plays the title role in a second cast for Dolores Claiborne, rehearses a scene where Dolores prepares to murder her husband.

The Thursday and Saturday performances feature Meghan Callahan, Frank Rosamond, Julia Wolcott, Emilie Faiella, and Dongwhi Baek, and in the Friday and Sunday cast are Rebecca Printz, Leroy Y. Davis, Ashlee Lamar, Ann-Marie Iacoviello, and Eric Carey. All are either Opera Institute students or School of Theatre graduate students. The scenic designer is Paul J. Dufresne, costumes are by AJ Jones, and lighting design by Marcella Barbeau, all School of Theatre graduate students.

Lumpkin conducts the 15-piece orchestra comprising School of Music grad students along with a couple of undergrads. He says Picker’s music “is, on the page, rhythmically complex, disjunct, angular, well-thought-out. But the whole impact is that it’s coming from the way an actor would deliver a line.”

“Bill’s a great conductor and he really has a deep understanding of my music and does it as well as any other conductor, and better than most,” says Picker, who has been back to campus to look in on this production. “There’s only one other conductor who has done three of my operas. I trust him with my music.”

Both voices and instruments are often pushed to their high and low extremes, as are the characters, Petosa says: “You make the ice as thin as it can get without breaking.”

Distilling the production to a chamber version only increases the intensity, he says: “Everything is pared down, but you see the scope of the humanity that the story is about. It’s distilled to its essence, but that doesn’t make it smaller—it makes it bigger.”

Dolores Claiborne, composed by Tobias Picker, libretto by J. D. McClatchy, based on a novel by Stephen King, is presented by the BU College of Fine Arts Opera Institute, School of Music, and School of Theatre. It runs Thursday through Saturday, February 21 to 23, at 7:30 pm, and Sunday, February 24, at 2 pm, at the Joan & Edgar Booth Theatre, 820 Commonwealth Ave., Boston. Tickets are $15, general admission; $10, BU alumni (reserved at least one hour before curtain, subject to availability); $7.50, Brookline residents (reserved at least one hour before curtain), free with BU ID, at the door, day of performance, subject to availability.