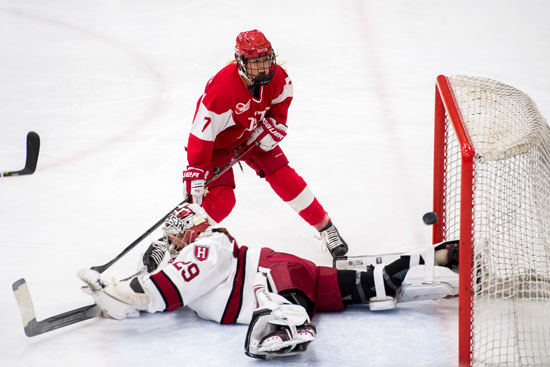 Sophomore Jesse Compher (CGS) just missing the net after taking a shot on goal during the championship round of the 41st Women’s Beanpot Tournament February 12. The Terriers won their first Beanpot since 1981. Photo by Cydney Scott

For a team that began the season unranked, and with only a single win after seven games, the improvement of the women’s hockey Terriers has been nothing short of remarkable: a 20-4-5 record since that slow start landed them as the eighth-ranked team at the end of the regular season.

And for the first time since 1981, the Terriers overcame their kryptonite—as head coach Brian Durocher (Wheelock’78) calls it—and claimed the 2019 Beanpot trophy.

“It showed our team that if we’re willing to work, we have a good enough team out there that we’re going to be able to win championships,” sophomore forward Jesse Compher (CGS) says. “It gave us the confidence we needed going into postseason.”

With three teams from the Beanpot Tournament—BU, BC, and Northeastern—making up the Hockey East championship field (Providence completes the four), the Terriers have good reason to feel confident entering the championship weekend. Still, Compher says, anything can happen in this tournament.

“We beat them once, but that doesn’t mean we’re gonna beat them again,” she says. “We have to go into the weekend thinking it’s a new game. Yes, we’ve played them before, but if we don’t show up playing our best hockey, they can beat us any given day.”

Leading the Terriers in scoring are Hockey East scoring champion Compher and redshirt junior forward Sammy Davis (CGS, Sargent), who are ranked third (60) and sixth (52) in total points nationally. Davis and Compher make up the second-best scoring duo in the country, behind Clarkson University’s Elizabeth Giguère and Loren Gabel.

On the other end of the ice, sophomore goaltender Corinne Schroeder (Sargent) was recognized as one of the best goalies in the country in December, when she was named the National Goaltender of the Month. Her 93.6 percent saving percentage ranks seventh nationwide.

“Our goal is to play our game and not to make a very good team look better,” Durocher says of the upcoming matchup. “On paper, BC’s just as talented or more talented than just about anybody. You don’t want to make them look like a great team because you didn’t execute…. Let’s make sure we do what we’ve got to do and let the chips fall.”

BU dropped the first regular season matchup against its Green Line rival, 4-3, in late November, but the Terriers say that their return to BC in early December proved to be the turning point of the season. BU swept the Eagles in a home-and-home series and pushed their winning streak to five games the following weekend against Rochester Institute of Technology.

“From September, the compete level of our team in practice and up in the gym was not comparable to any other year, but we weren’t able to get the wins we wanted,” says senior defensewoman Connor Galway (Questrom). “But once we were able to get those wins at BC, it showed we can beat anyone.”

The Terriers dominated Hockey East during the early part of the decade, when they won the conference tournament four straight times, from 2012 to 2015. But struggling to reclaim it since, the senior class has been left without a title. A championship exit, Galway says, would be a great way to go out.

“I have confidence in everyone in our dressing room,” she says. “If we’re gonna do it, this is the year to do it.”

The BU women’s hockey team faces Boston College in the semifinal round of the Women’s Hockey East Tournament playoffs at 4:35 pm on Saturday, March 9, at Schneider Arena, 331 Huxley Ave., Providence, R.I. The first semifinal game, Northeastern University vs Providence College, precedes at 1:35 pm. Tickets are $10 for the day for the general public and free for any student of a Hockey East school with a valid ID. The game will be streamed live here and the championship game here. The winners of the two semifinal matchups will face each other in the championship game Sunday, March 10, at 1:35 pm, at Schneider Arena.

The Rivalry Is Back: No. 8 BU Faces No. 6 BC in Hockey East Semifinals Saturday

The Rivalry Is Back: No. 8 BU Faces No. 6 BC in Hockey East Semifinals Saturday
0
share this