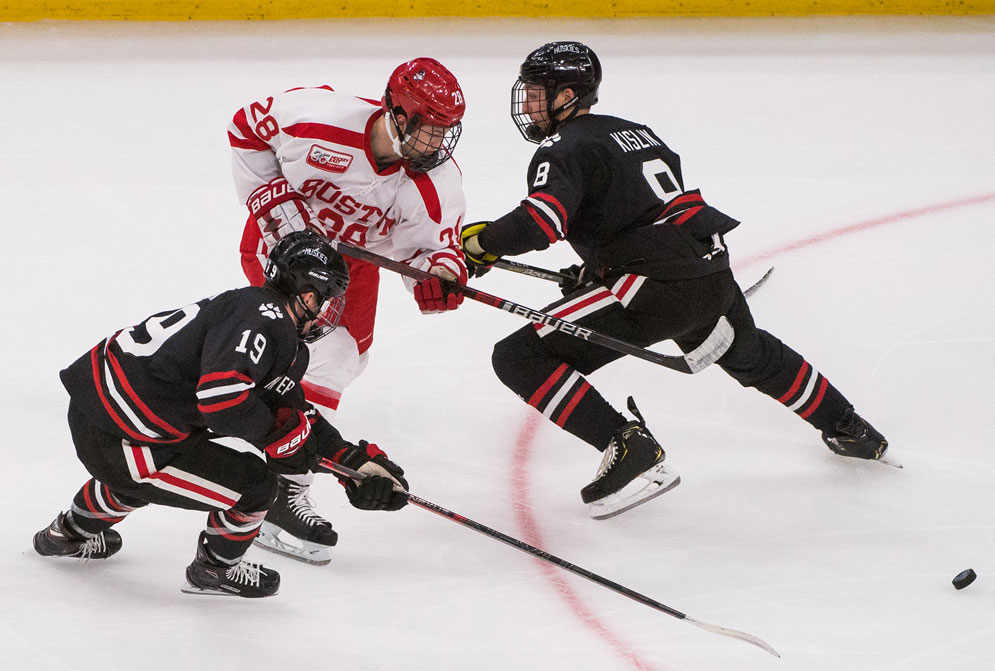 Forward Joel Farabee (’22) impressed in his Beanpot debut, scoring the only Terrier goal of the game Monday night, but BU ultimately fell to Northeastern, 2-1. Photos by Jackie Ricciardi

The BU men’s ice hockey team entered the 67th Annual Men’s Beanpot Tournament semifinals Monday night determined to avenge their 5-2 loss to Northeastern in last year’s championship game. But it wasn’t to be. At the end of the overtime game, the Terriers fell to the 13th-ranked Huskies, 2-1, at TD Garden.

The first period began with a Northeastern strike, when Huskies forward Patrick Schule’s physical play forced a turnover from BU defenseman Cam Crotty (’21). Huskie Liam Pecararo secured the puck, then found the wide-open Schule, who got past Terrier goaltender Jake Oettinger (’20) for the first goal of the evening.

The Huskies remained aggressive, with Pecararo soon called for a hooking violation that gave the Terriers the game’s first power play. With Pecararo off the ice, forward Joel Farabee (’22) launched the Terrier offense with a shot from the right wing that went wide. Another attempt by defenseman David Farrance (’21) led to a rebound by forward Patrick Curry (’20), but their efforts to score were blocked by Northeastern goalie Cayden Primeau.

Soon, with another power play off Northeastern forward Biagio Lerario’s delay of game violation, Farabee again threatened the Huskies by splitting the defense for another opportunity, but was once more stopped by Primeau.

The Huskies looked to push their lead in the following minutes, but one goal was enough for Oettinger, who prevented them from landing another for the remainder of regulation: when Northeastern defenseman Jordan Harris maneuvered past cocaptain Dante Fabbro (’20) for a snap shot from the left side, the Terrier goalie quickly made the stop. Later, Huskie Tyler Madden tricked Crotty and got Northeastern fans off their feet, but Oettinger continued to protect the net.

With just 21 seconds remaining in the first period, Farabee was finally rewarded for his strong offensive play: he rebounded Crotty’s miss and tied the game with a shot that hit Primeau’s left skate and found the back of the net.

From that point on, the game belonged to Oettinger and Primeau, both former winners of the Eberly Award, given to the goalie with the tournament’s best save percentage. First, Oettinger dominated, stopping shot after shot. When a wrist shot by Crotty backfired and led to a Pecararo breakaway about eight minutes into the second period, the 6’5” goaltender shut down the one-on-one attempt.

Then, with only 4:40 remaining in the second period, it was Primeau’s turn: Farabee looked destined to score his second goal with his own breakaway from the neutral zone, but the Northeastern goalie shut out Farabee’s snap shot.

The final period began with a scare for BU, when Schule ripped the puck away from Farabee in the neutral zone and went for a straightaway shot—but again, Oettinger made the stop, knocking it off with his glove. Crotty responded with a wrist shot from the right wing, but the attempt hit the pipe. The Huskies drove the momentum, outshooting the Terriers 34 to 18 in the third frame, but with neither side able to score, the game went into overtime.

Then came the play of the night: just 51 seconds into overtime, Huskie Jeremy Davies found Madden from the defensive zone and created a breakaway that resulted in a Madden finish that slipped right past Oettinger.

The Northeastern Huskies, who broke a 30-year Beanpot drought when they won last year’s tournament, will be out to defend that long-sought title when they face Boston College next Monday in the championship game. The Eagles squeaked by Harvard, 2-1, in the first game of the night.

The Terriers travel to second-ranked UMass Amherst on Friday before returning to TD Garden Monday to face the Crimson in the Beanpot consolation game.

The 67th Annual Men’s Beanpot Tournament: BU plays Harvard in the consolation game on Monday, February 11, 2019, at 4:30 pm, followed by the championship game between Boston College and Northeastern at 7:30 pm, both at TD Garden, 100 Legends Way, Boston. Tickets are available on Ticketmaster. The games will be televised live on NESN and broadcast live on WTBU Radio (640 AM and 89.3 FM).