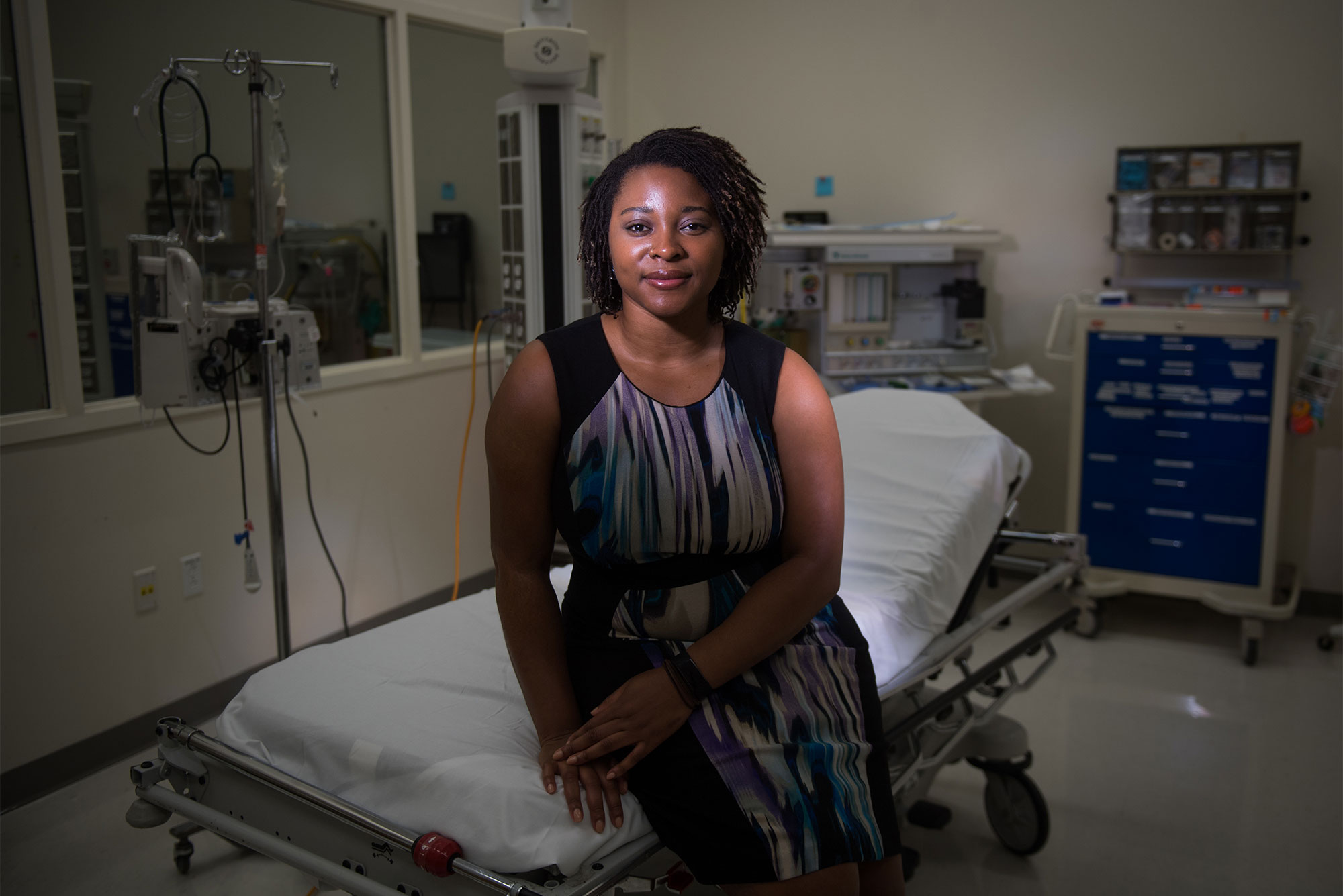 Tejumola Adegoke, a practicing ob-gyn at Boston Medical Center and a BU School of Medicine instructor in obstetrics and gynecology, is working to eliminate racial bias and disparities and improve the health of soon-to-be and new mothers. Photo by Cydney Scott

Why Black Women Face More Health Risks Before, During, and After Pregnancy

The day after she gave birth, record-breaking professional tennis star Serena Williams felt an alarming shortness of breath. Having a long medical history of blood clots, she told the nearest nurse that she feared she was having a pulmonary embolism, only to have her concerns dismissed. As she recalled in a 2018 Vogue profile, at her continuous insistence the medical team finally listened to her and discovered that she was right. Williams was treated for what were, in fact, small blood clots in her lungs and a series of ensuing complications. But why weren’t her concerns taken seriously the first time she mentioned them?

“It is unacceptable,” says maternal health expert Lois McCloskey, a Boston University School of Public Health associate professor of community health sciences. “We have no system to follow women beyond the postpartum visit, even after complications in pregnancy. And that can be fatal.”

The CDC’s report confirms what other research has already revealed. Historically, the United States has consistently held an awful record of racial disparities in maternal health. And last year, UNICEF reported that compared to other high-income countries, American women experience the highest rate of maternal mortality due to complications from pregnancy or childbirth.

McCloskey says it’s a complicated problem in a complicated system, but once the layers start to get peeled back, the root cause can be summed up in just a few words: intergenerational and chronic stress.

“Stress caused by experiences of institutionalized racism and disrespect of black women,” says McCloskey. “And there has finally been more attention given to chronic stress and its link to cardiovascular problems,” which are the most common causes of pregnancy-related deaths and complications.

“The recent data is really showing us that we can’t deny the effects of institutionalized and systemic racism on the outcomes our patients face,” says Tejumola Adegoke, a BU School of Medicine instructor in obstetrics and gynecology and a practicing ob-gyn at Boston Medical Center (BMC). “It’s very hard to disentangle from the fact that many black women live in food deserts and in unsafe neighborhoods. If we look at income disparity, it stands to reason that women of color may be less able to afford fresh produce or a gym [membership] and to do all the things we encourage people to do to maintain a healthy lifestyle.”

We can’t deny the effects of institutionalized and systemic racism in the outcomes our patients face.

Throughout her career, Adegoke always knew she wanted to work with medically underserved women, which attracted her to practice gynecology and obstetrics at BMC, where a large number of the patients she cares for are socioeconomically disadvantaged women. Her research on birth outcomes and conditions, such as hypertensive disease, low birth weight, and preterm delivery, indicates that black women born outside the United States do not have quite the same elevated risk of pregnancy-related complications as their counterparts born here.

Though racial disparities persist abroad, women from “other countries seem to be doing better than women from the United States,” she says. “This really points away from the idea that disparities are due to some biological or genetic difference and really says something about the environment.”

Many US hospitals are implementing patient safety bundles, which lay out standardized, hospital-wide protocols for certain risks during childbirth. But improving the technical quality of care during pregnancy is the “tip of the iceberg,” McCloskey says.

“If we only look at the snapshot time of childbirth, we’re missing opportunities to prevent deaths. We need to make sure women are linked to primary care, with their story of birth and complications being known by those primary care providers,” she says.

Underlying health conditions—like high blood pressure and diabetes—are likely to worsen during pregnancy, so women should be carefully monitored by their clinicians before, during, and after labor. Lack of insurance coverage for maternity care can prevent women from receiving sufficient prenatal care, and after childbirth, Medicaid coverage is guaranteed for only 60 days, which is simply not enough time to screen for potentially life-threatening complications resulting from pregnancy, according to McCloskey and Adegoke.

“The bottom line is that we don’t care enough for our women, and therefore lower-income and black women who are systematically treated differently in the healthcare system are vulnerable,” says McCloskey.

Adegoke’s research indicates that women from other countries “seem to be doing better than women from the United States,” with less risk of pregnancy-related complications than their US counterparts.

Here in Massachusetts, Congresswoman Ayanna Pressley is the leading sponsor on a new bill, known as the MOMMIES Act, that would extend Medicaid coverage to a full year after childbirth and increase access to community-based services like doulas and midwives. State legislators are also pushing for a bill to allow Medicaid to cover support services provided by doulas, which is a critical step to providing comprehensive, equitable care before and after childbirth.

But even before a woman gets pregnant, there are opportunities for clinicians to reduce the health risks. That’s the idea behind the Gabby Preconception Care System, a computer program designed to improve women’s health before pregnancy begins by giving them easier access to preconception care, providing relevant information, and building a health record.

“Preconception care is a hugely important step that doesn’t fit traditional clinical care very well, so people simply aren’t doing it,” says Jack. Gabby, which is currently being tested in health clinics across the country, walks women through about 100 risk assessment activities in 13 areas of health, such as environmental risks, social factors, sexual health, infectious diseases, and genetic issues. “When you have a short visit with a patient, it’s not possible to cover all of these areas,” Jack says.

Through Gabby, patients can bring a health to-do list to their physician and learn about steps they can take to decrease their risk of complications once their pregnancy begins, such as getting caught up with immunizations or screened for sexually transmitted infections. Gabby can also help women choose a birth control method that’s right for them if they are not looking to become pregnant. The program is not meant to replace a visit to an ob-gyn, but to be a catalyst for conversation and to bridge information gaps between patients and doctors in preconception care settings.

Jack isn’t the only one excited by the opportunity to improve maternal outcomes through programs designed to influence women’s health before conception. Within the BMC OB-GYN department, Adegoke has implemented a case review process that helps clinicians examine how individual and institutional bias could affect a patient’s health outcomes, presenting an opportunity to factor those learnings into their care approach. She is also in the early stages of starting a health-equity committee aimed at eliminating disparities and improving doctor-patient conversations.

I dream we have a system where we help women through all stages of their life cycle, and a system committed to dismantling systemic and institutional racism and implicit bias inside the healthcare system and outside.

“If women are able to see a physician for preconception counseling, we can talk about existing medical problems or social barriers and partner with them to optimize their health even before the pregnancy. We also need better [insurance] coverage for women before and after they have delivered their baby and we need to continue to help women optimize their health at all stages of life,” Adegoke says.

McCloskey also believes that a holistic and lifelong approach to maternal health is key. Last year she co-led a conference, Bridging the Chasm Between Pregnancy and Women’s Health Over the Life Course, which brought together patients, providers, and researchers. The conference launched seven working groups nationwide to build solutions and align research with women’s lived experience in the healthcare system, educate the public, eliminate disrespect and racism in healthcare, and preserve the narrative from birth onward. Their proposed plans are expected to be released in early 2020.

“I dream we have a system where we help women through all stages of their life cycle, and a system committed to dismantling systemic and institutional racism and implicit bias inside the healthcare system and outside,” she says.

“Certainly the relationship between the healthcare system and minority groups in the United States is fractured, but we need to work together to rebuild that bridge,” says Adegoke.

McCloskey’s work is supported by the Patient Centered Outcomes Research Institute and the National Institutes of Health.

Why Black Women Face More Health Risks Before, During, and After Pregnancy

There are 2 comments on Why Black Women Face More Health Risks Before, During, and After Pregnancy

Why Black Women Face More Health Risks Before, During, and After Pregnancy
2
share this