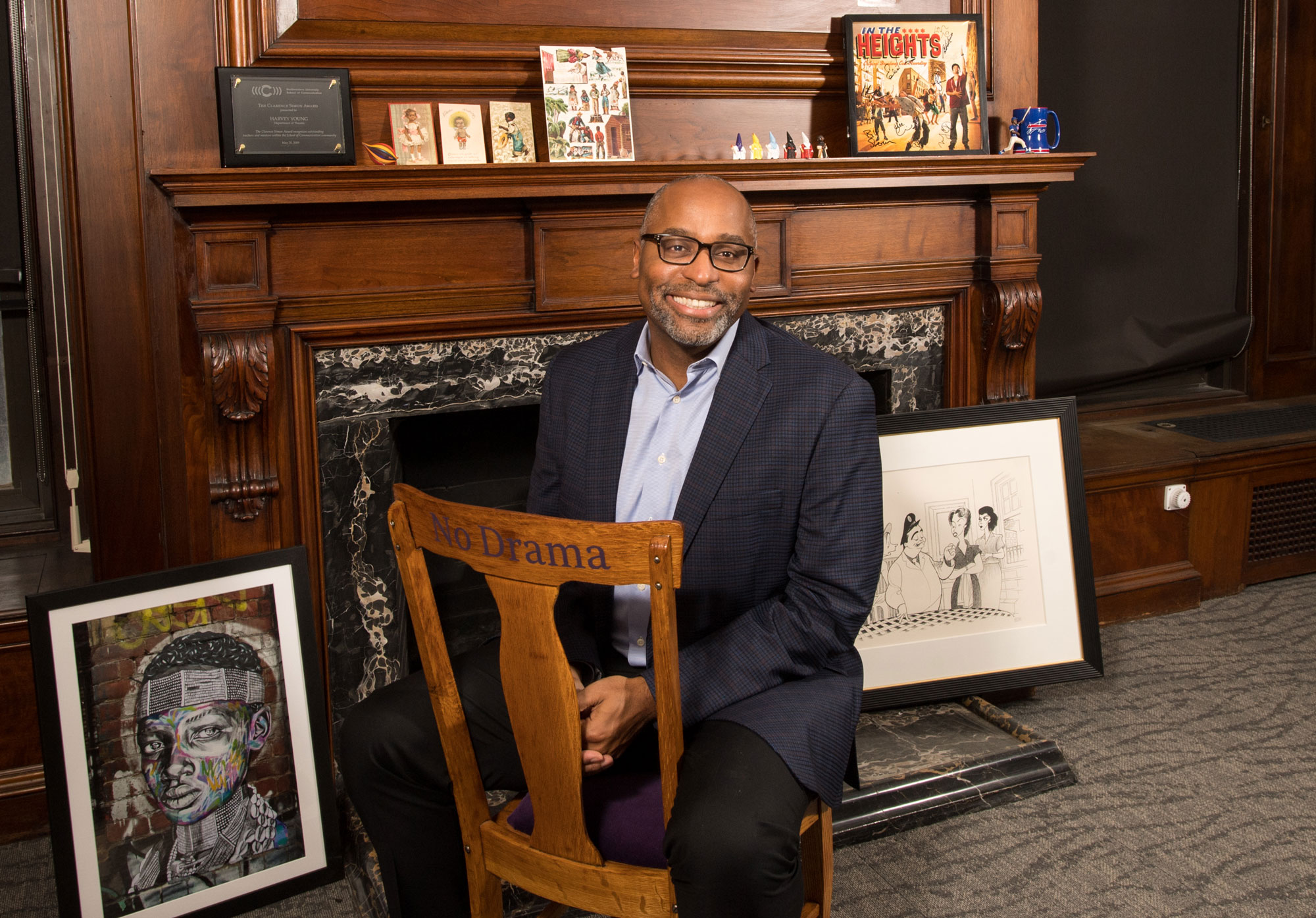 Click on the circles above to see more of what Harvey Young displays in his College of Fine Arts office.

Back when the College of Fine Arts building at 855 Comm Ave was a Buick dealership, the oak-paneled corner office now occupied by Harvey Young, dean of CFA, belonged to the dealer’s manager. Today, the office overlooks not only the Green Line, but the Joan & Edgar Booth Theatre across Comm Ave.

It’s fitting that a dean of a fine arts college has an office filled with sculptures and paintings, but pieces here also include cartoons, sports ephemera, and even action figures. Practically everything has a story behind it and some may make visitors do a double take.

On one bookshelf are five small plastic figurines, dressed in what appear to be the hoods and capes worn by members of the Ku Klux Klan. Young bought these Penitents figurines in Seville, Spain, during Semana Santa (or Holy Week, the week leading up to Easter) in 2003. “When you think about it, there’s that look,” he says, “but that style was taken by the Klan. It’s an odd and eerie experience being in Seville during the processions, and you look behind you and see three people all dressed up and carrying torches.”

On his large wooden conference table are a stack of postcards Young collects and writes about in publications like the Wall Street Journal and the Chronicle of Higher Education—early 20th-century racial caricatures of African Americans. Young’s academic research focuses on race, history, and performance.

One Valentine’s Day card in the collection shows a stereotypical cartoon of an African American boy holding up a flower that looks like a banana leaf. “I’m interested in how people talk about race and the daily conversations in which they do it, their casual conversations,” Young says. In other words, they didn’t think twice about sending such a hate-filled card to someone they loved. “These cards were the most popular types of cards sent in the 1930s and earlier. It’s not uncommon for people to read about it, and for people to email me and say they were going through their grandmother’s scrapbook, but don’t want these cards. And then they’ll mail them to me.”

Not everything in Young’s collection is so provocative. A wooden chair in front of the fireplace, decorated with Northwestern University’s signature purple, was a gift from (and made by) the school’s theater faculty. Young was chair of the theater department there, and his colleagues presented it to him when he left for BU two years ago. The chair bears two messages—on one side: “The Chair,” on the other: “No Drama.”

“My admin style is that where I don’t need drama,” Young says with a laugh. “Let’s just work together to get stuff done.”