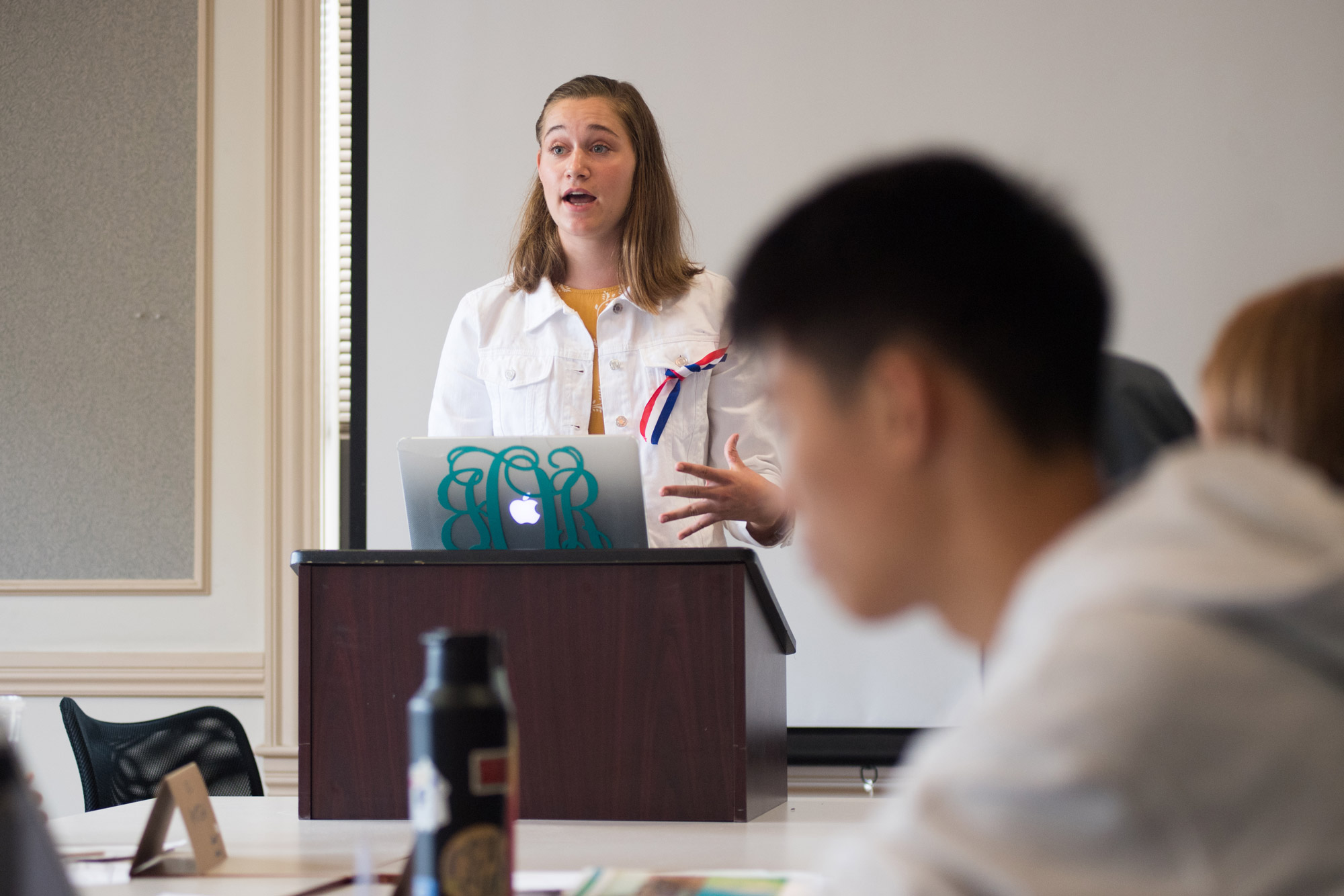 Listen to a Lecture about Revolution? Why Not Play a Revolutionary in Class?

The classroom argument on granting freedoms to faraway oppressed people, while women and marginalized citizens at home are denied basic rights, grows so loud—people speaking over each other and trading snarky attacks, with one even ripping an opposing paper in half—that Diana Wylie, a College of Arts & Sciences professor of history, asks a student to shut the door.

That the dispute centers not on US-bound migrants in the Trump era, but on long-dead slaves in the 1791 French colony of Saint-Domingue (now Haiti), doesn’t dial down the heat.

“We need to first ensure the rights of all our own current citizens before we go freeing all the slaves of Saint-Domingue,” thunders Jean Sylvain Bailly, president of the French National Assembly, the government established by the French Revolution. “Bailly” is actually Josephine Olson (CAS’22), one of seven students portraying real-life assembly members and reimagining the body’s debate over Saint-Domingue’s bloody slave revolt.

“Danton had this crazy idea that we just let all the slaves free,” she adds in a dig at Georges Danton—Brett Shagoury (CAS’21)—who advocates emancipation. Danton warns of possible attacks on France from European enemies and takes his own shot at the Marquis de Lafayette: “I advocate for someone to replace Lafayette as the leader of the National Guard. His record as a military leader—although with some successes—has had more strategic losses than successful battles.”

“Though I disagree with a large portion of the speech,” Erin Callahan (CAS’20, COM’20), as Lafayette, deadpans to laughter, “I do agree with the first part, that slavery is completely unjust.”

Understanding Revolution: France and Algeria is one of several BU classes this semester featuring an innovative role-playing technique developed at Barnard College called Reacting to the Past, used by faculty at hundreds of colleges and universities. As shown by the animated discussion in Wylie’s class, the idea is to improve learning by doing: immersing students in the world they’re studying.

“It’s not a reenactment” of past events, says Chris Walsh (GRS’95,’00), a CAS associate professor of English and director of the CAS Writing Program, who is using the technique this fall in his Living the American Revolution class. “It’s a kind of re-creation of the historical conditions, and then letting students run a sort of simulation.”

In a subsequent class, Wylie’s students learn the real-life upshot of the National Assembly’s debate—the eventual abolition of slavery in Saint-Domingue. That coda and the run-up to the role-playing, where students prep for their roles by discussing pertinent documents and hearing Wylie’s lectures about this historical moment in France, shows how this approach blends traditional lectures with active student participation

Wylie was sold on Reacting when she went to a workshop on it last year. “I flew to St. Louis and I spent several days becoming a noble Jacobin in revolutionary Paris,” she recalls. Role-playing transported her back in time, creating the same passion her students are experiencing in this fall’s National Assembly re-creation.

“I was thrilled,” she says, “to all of a sudden be having feelings of grandeur about the aspirations of the French Revolution—to do something that had never before been done in the world, to declare human rights the rights of man without regard to estate, to your birth, was something that I was fiercely proud of as a Jacobin, in a way that just [through] reading…I hadn’t had before. I was in some way living in that era.”

She says she thought that if it could happen to a veteran teacher, “wouldn’t that be a wonderful thing to do with students?”

It is, Olson says. Since we know how historical situations turn out, merely reading about them “is like reading a murder mystery book, but you already know who did it. You might still get a little fear and anticipation, but the element of surprise is gone, so it is easy to feel at ease the entire time.”

With role playing, she says, “for the first time, the emotions of the citizens in Paris resonated with me, and I realized the National Assembly was filled with ordinary people trying to figure out how to create a peaceful and unified France.”

Walsh is using Reacting for the third year in a row, and he gave a talk on the technique at BU’s Educational Innovation Conference last May.

Like Wylie, he was sold on Reacting after participating in role-playing the French Revolution. “It makes you so curious about what really happened, and also it just reminds you of the contingency of history, that things could have gone differently.”

He says that “the sense of something at stake” students get from reenacting history actually makes them better, livelier writers on their papers. In more traditional classes, “a lot of writing feels academic, in a bad sense.”

Research backs him up. A recent Inside Higher Ed study found that students learn more from active learning such as Reacting than from traditional lectures.

Role playing “allowed us to become one with our characters,” says Danton, er, Shagoury, “wanting to abide by their beliefs, but also wanting the best for the French people and the lives at stake in the simulation. It also caused us to do a lot of research and reading into the issues and look for other historical events to potentially use against our political opponents. The entire time, it was a crazy yet enjoyable experience.”

Listen to a Lecture about Revolution? Why Not Play a Revolutionary in Class?

Listen to a Lecture about Revolution? Why Not Play a Revolutionary in Class?
0
share this