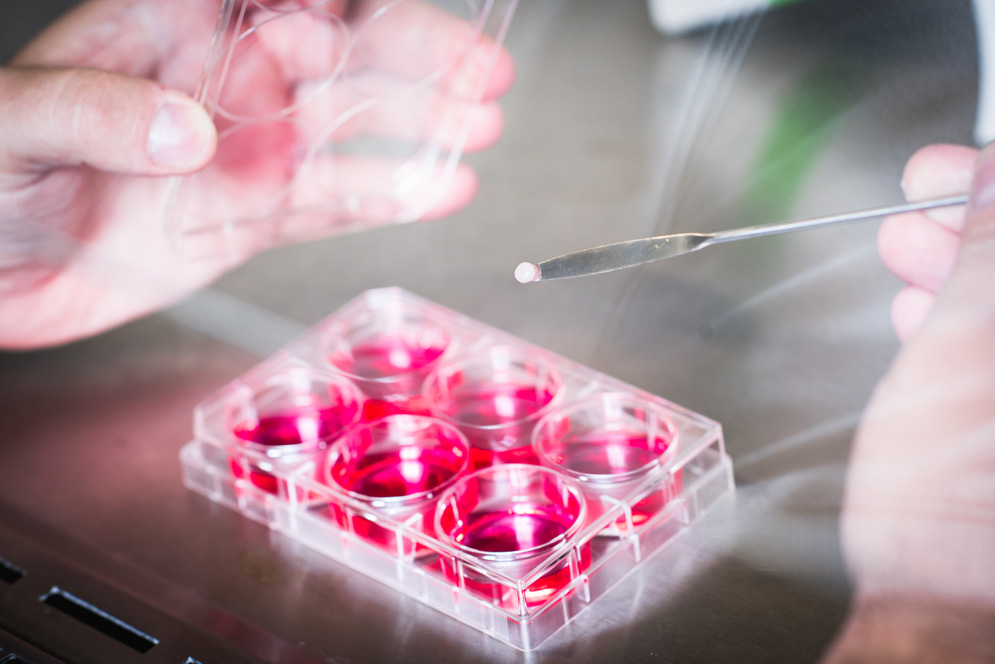 When imagining a patient suffering from osteoarthritis you might picture a grandmother struggling with hip pain or a grandfather whose fingers are too stiff to play a melody on piano keys. But the disease, which affects over 30 million Americans, is much more pervasive than that. It may claim less lives than heart disease or breast cancer, but the daily wear and tear of the cushioning cartilage between joints can result in serious pain and, if not treated, permanent disability.

Patients can treat their pain with medication or slow the degeneration through lifestyle changes, but ultimately the loss of cartilage is irreplaceable. Since the emergence of the tissue engineering field in the 1990s, tissue engineers have been working to develop fast and sustainable methods to recreate articular cartilage in a lab that can be clinically implanted into a patient’s joints. The field has seen progress in the past several decades; however, perfectly recreating the tissue has proven more challenging than scientists initially believed. Clinical studies in the field have been largely disappointing.

But research from the Growth Factor Mechanobiology Lab of Michael Albro, a Boston University College of Engineering assistant professor of mechanical engineering, biomedical engineering, and materials science and engineering, has shown promise in developing a method to grow the tissue without the typical instability or imperfections associated with engineered cartilage.

Typically, when biomedical engineers construct cartilage in a lab, they build a nurturing, jelly-like environment in a petri dish and introduce proteins, called growth factors, that help the cells decide what they’ll be when they grow up.

“These growth factors are present in the body at very low concentrations, but they’re incredibly potent,” says Albro. “In a space of just the size of a cell, only a few molecules are present. And if you contrast that with nutrients we’re more familiar with, like glucose, you’re talking about billions of molecules in that same space.”

A common growth factor, TGF-Beta, is an essential part of growing cartilage, but one that Albro says the field does not yet completely understand.

In the body, these few TGF-Beta proteins start out in an inactive form and are activated slowly through the body’s masterful regulatory system that gradually releases their active form through the dissolving of a protective shell—almost like a gel capsule. But to see faster results in the lab, Albro says that it has been common practice to add these proteins already in their active form, and in concentrations much higher than naturally occur in the body.

“What we’re understanding now is that these supraphysiologic doses of TGF-Beta can actually give rise to signs of pathology,” says Albro. “If you look closer at the tissue being formed, it’s far from ideal.”

These pathologies include degeneration—ironically, much like that which occurs in the natural cartilage of osteoarthritic patients—and the production of a much less pliable form of collagen typically found in bone instead of cartilage. Interestingly, this has been a phenomenon studied by developmental biologists for some time now. Their work has shown that excessive levels of the active form of TGF-Beta can lead to all kinds of pathologies, including cancer and fibrosis.

“I was always struck by the disparity in perspectives by researchers in these two fields,” says Albro. “Engineers are adept at quickly achieving functional outcomes, but the developmental biologists have this very sophisticated understanding of how these growth factors act in the body. There’s incredible value in both perspectives.”

And that truth is evident in the results that Albro’s lab has seen when trying to more thoughtfully grow cartilage. Instead of adding extremely high concentrations of the TGF-Beta in its active form, Albro’s lab is adding TGF-Beta at natural levels in its inactive form, letting it be used by the cells as they need it—just as the body does it. While still in its preliminary stages, Albro says that this bio-inspired method can grow cartilage in a month with results that much more closely match that of natural cartilage.

“We think this could very easily become the gold standard of all musculoskeletal tissue engineering,” says Albro. “Because TGF-Beta is so ubiquitous in all these fields, this is applicable to tendons, ligaments, etc. All these different tissues could really benefit.”

Moving forward, Albro and his lab of undergraduate, master’s, and PhD students are continuing their interdisciplinary efforts by working with Mark Grinstaff, a Boston University ENG professor of biomedical engineering and a College of Arts & Sciences professor of chemistry, and Joanne Murphy-Ullrich, a biology expert at the University of Alabama at Birmingham, to further refine their approach and increasingly align it with the body’s natural methods.

“I think there’s been a lot of promise and appreciation in the last few years of interdisciplinary research,” says Albro. “[Researchers] are realizing, if they don’t communicate with experts in other disciplines, they’re missing out on a lot of the good stuff. The best discoveries these days are really being made at the intersection of these disciplines.”

Crossing the Scientific Aisle to Advance Tissue Engineering
2
share this