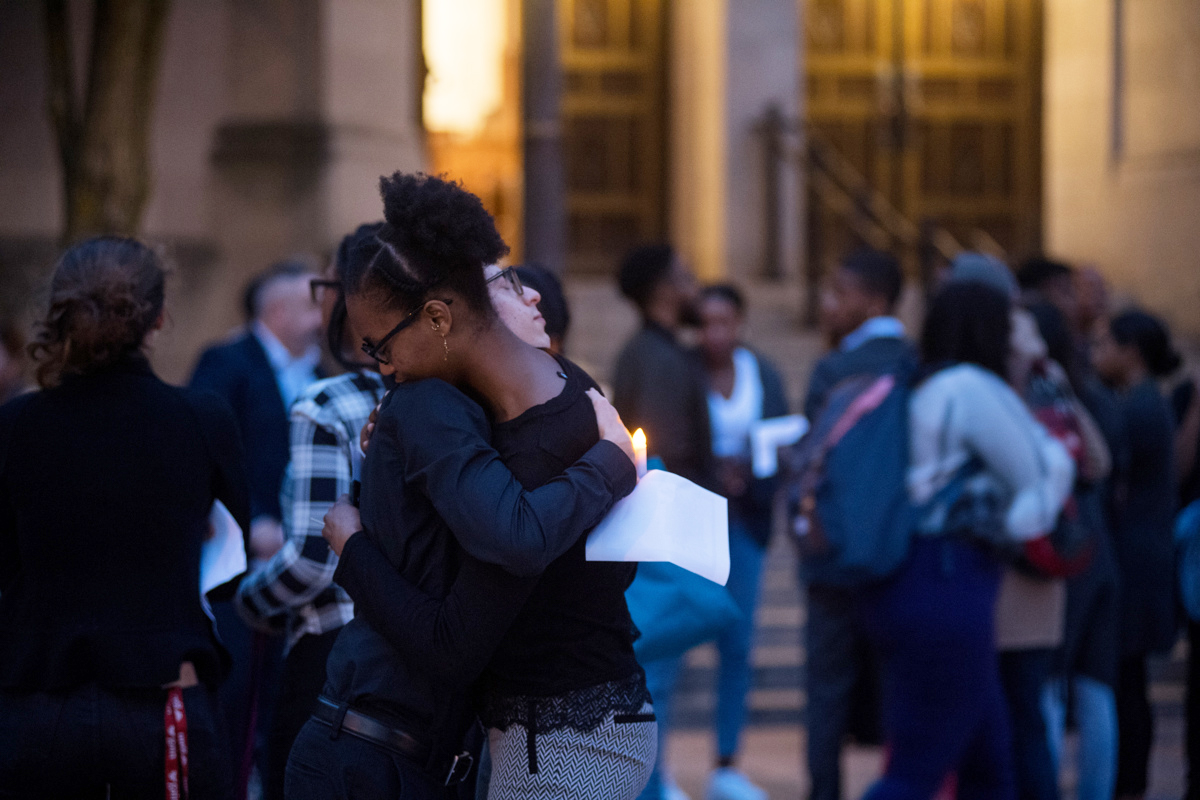 Mourners outside Marsh Chapel following the memorial service for Erin V. Edwards (COM’21), who was remembered as kind, caring, talented, and a great loss to the world.

Erin Edwards (COM’21) Remembered for Her Kindness, Humor, and Ambition

Friends, faculty, and staff gathered at Marsh Chapel to honor a life, cut short by tragedy, that touched them all

More than 200 students, faculty, family, and friends gathered at Marsh Chapel Monday evening for a memorial service for BU student Erin V. Edwards (COM’21), who died in August. Speakers recalled her as a kind, caring, and immensely talented person whose passing is a great loss to the world.

Edwards was “a young woman who radiated love, soul, and grace,” said Katherine Kennedy, director of the Howard Thurman Center for Common Ground, where Edwards had spent a lot of time and had been accepted as a Thurman Center student ambassador for the coming school year.  She would have facilitated this year’s Tea Time program at the center. “She had such an impact.”

During the hour-long service for Edwards, who died in a violent family tragedy at her home in suburban Atlanta, those who knew her came forward to extol her empathy, her belief in social justice, and her determination to make an impact as a journalist. Several large photographs of the 20-year-old, all of her smiling, stood in front of the altar.

“Erin made journalism look easy,” said Michael Holley, a College of Communication associate professor of the practice of journalism. “She could have done whatever she wanted in the business. And once she got in it, she would have changed it.”

Nancy Lowenstein (Sargent’87), a Sargent College of Health & Rehabilitation Sciences clinical associate professor, who was a mentor to Edwards and her fellow Posse Foundation scholars from the Atlanta area, read from an Instagram post Edwards wrote. “You must first please yourself; love yourself; have faith in yourself. Until you tune out the white noise and let go of the pressure of pleasing others, you will never realize the amazing plans God has for you. And the people who truly love you will be proud that you had the strength to do so.”

Fellow Posse scholar Archelle Thelemaque (COM’21) credited Edwards as being the center of their cohort: “With a look, an affirmation, a squeeze of the hand, she had that rare ability to let us know everything was going to be OK.”

Four friends who worked together on a WTBU student radio show with Edwards each took a turn recalling the way she lit up the studio despite a challenging time slot. “We never knew we could have so much fun dancing around and singing in a radio studio at 6 am on a Sunday,” said Charlotte Beatty (CAS’22).

There were moments of levity, too, as friends gently teased about her frequent tardiness: “If she said she was on the way,” one said, “that meant she was still in bed.”

The emotional heart of the service, though, came when Erin’s boyfriend, Derrick Lottie (Questrom’21), barely holding back tears, recounted how he and Erin talked for eight hours when they first came together, a conversation he called “the turning point of my life.” So certain was Lottie of their connection that the first person he told was his mother.

He listed the many reasons he loved Erin, including “how much she cared about other people’s struggles” and how he was inspired by her ambition to be the best at what she did. “She took care of me when I was sick,” he said, “and encouraged me to be the best version of myself.”

Now they can spend even more time together than ever, he said, “because I can always feel her spirit.”

Lottie also read a brief note to Erin and her brother, who lost his life in the same family tragedy, from their father, Dr. Christopher Edwards, a prominent orthopedic surgeon in Atlanta, who did not attend the service, but thanked the BU community for its support. “My dearest Erin and Chris, you are the loves of my life,” he wrote. “You are the air that I breathe.… I am so very proud of you.”

Edwards died along with her 24-year-old brother, Christopher Edwards, and their mother in a shooting that police say was apparently committed by their mother.

Erin Edwards (COM’21) Remembered for Her Kindness, Humor, and Ambition

Posse Scholar, COM Junior Remembered for Her Energy and Her Empathy

There are 2 comments on Erin Edwards (COM’21) Remembered for Her Kindness, Humor, and Ambition

Erin Edwards (COM’21) Remembered for Her Kindness, Humor, and Ambition
2
share this