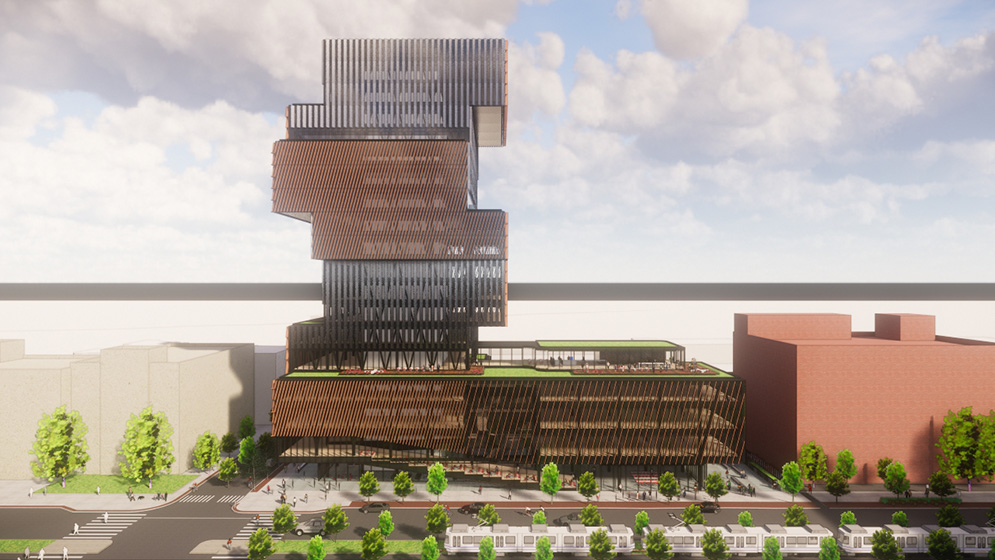 The stretch of pavement between BU’s College of Arts & Sciences and Sargent College will, if all goes according to plan, soon give way to a towering addition to the Boston skyline: the BU Center for Computing and Data Sciences. Encompassing mathematics and statistics, computer science, and the Rafik B. Hariri Institute for Computing and Computational Science & Engineering, the 17-floor building will orient this intersection as the academic heart of BU. It will also be awe-inspiring.

In spring 2013, the University’s leadership team held a design competition to “find an architect that would make a statement,” says Robert A. Brown, BU president. They selected Toronto-based KPMB Architects to construct a building that would “mark the dynamic change in the University and talk about the century we’re in”—one driven by computational and data sciences.

“Every industry is being formed by new and novel uses of data,” from medicine to media marketing, Brown says. “And those uses of data are going to keep transforming the way society works. It’s becoming inculcated in every discipline, so every one of our fields is developing a data science piece. As a university, we asked how we’ll meet that demand.”

Situated at 645 Commonwealth Avenue, at the corner of Granby Street, now the site of parking lot, the proposed 345,724-square-foot building would be the tallest on campus, at 297 feet high, with a footprint of 20,500 square feet. (By contrast, nearby Warren Towers is 174 feet tall and the Prudential Center is 750 feet high.) “By putting this building at the nexus of campus, we’re making the statement that it’s central to the University,” Brown says. 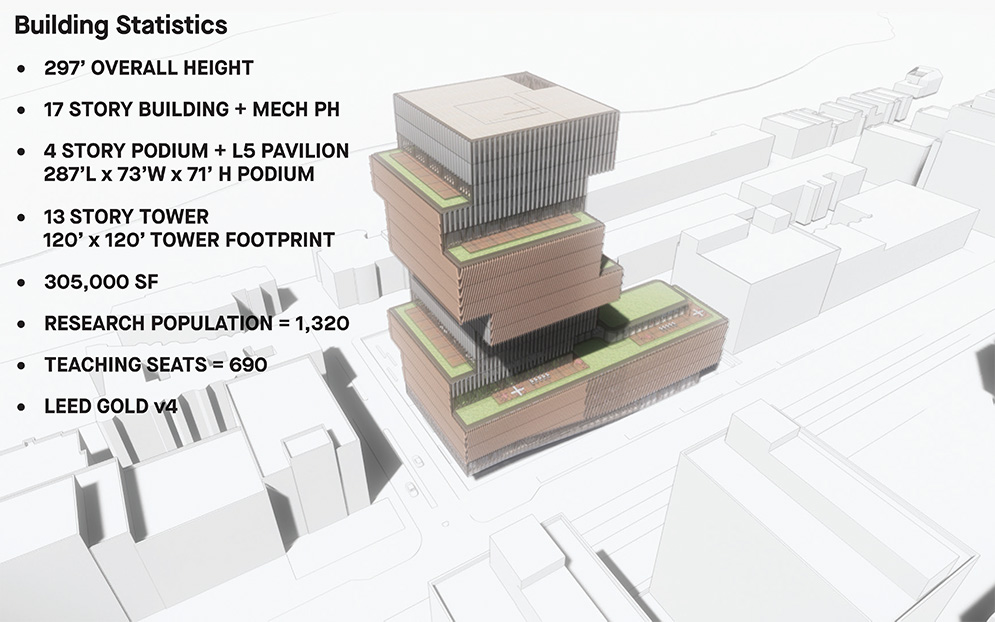 Following an approval process with the city of Boston that could take up to a year, the project could begin site preparation, including drilling test geothermal wells, in spring 2019. The team anticipates full construction to be under way in fall 2019. When the building is completed, approximately 60 percent of all BU classes will be taught within a five-minute walk of the Data Sciences Center.

“This will be a significant building that will change the architectural fabric of the University, integrating a cutting-edge design into the existing campus and enhancing BU’s—and Boston’s—skyline. People will know where Boston University is,” says Walt Meissner (CFA’81), associate vice president for operations. “You can have modern and old right next to each other if they can work well together.”

The proposed design for the Data Sciences Center picks up elements of the surrounding buildings, like the warm reds of Bay State Road’s brick townhouses, and it will change color, depending on the direction of the sun as it passes across the building’s fins. These fins “likely would be metal, a screening device that would help animate the building,” says Marianne McKenna, founding partner of KPMB. In addition to being architecturally unique, the fins are essential to the building’s energy efficiency. “The profile of the building will be quite extraordinary,” she says. “It’s very timely for BU to step out to have a landmark.” The fins echo the ridged face of the Rajen Kilachand Center for Integrated Life Sciences & Engineering building, which opened in spring 2017, and its expansive windows reflect those of the new Joan & Edgar Booth Theatre and the College of Fine Arts Production Center. 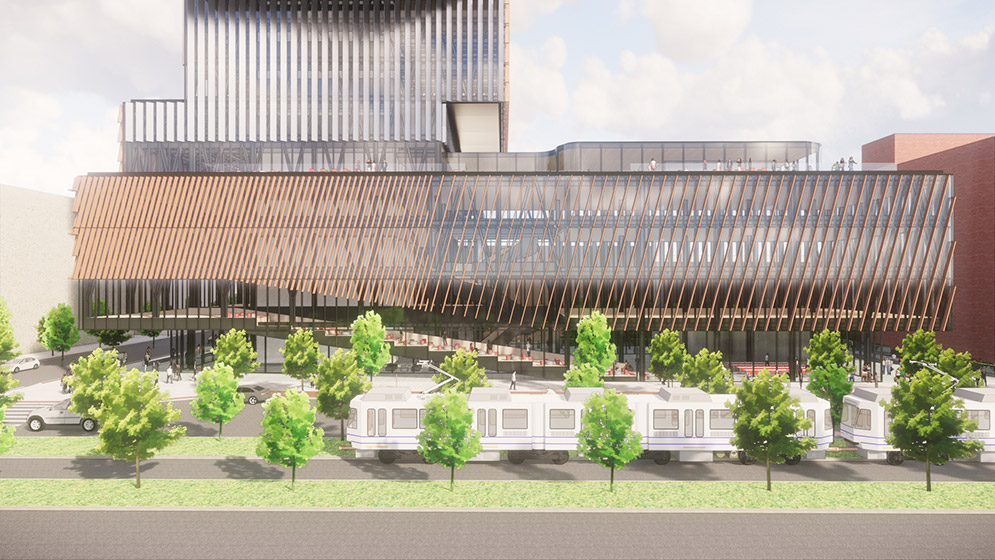 The ground floor is designed to be a public space, incorporating a café, informal lobby spaces, and general-purpose classrooms, as well as BU’s Early Childhood Learning Lab. The second floor—which may be connected to the first by “collaboration terraces” and a grand staircase—would house the BUild and the BU SPARK! programs, as well as additional classroom, collaboration, and study spaces. 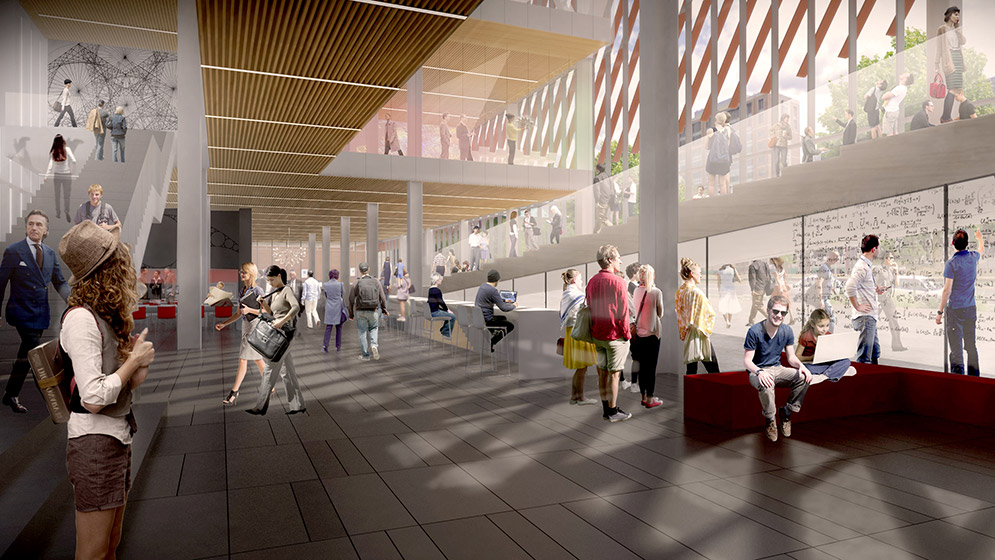 The higher, more specialized floors will be organized into departmental neighborhoods connected by a central stair. “Each department has developed a common language of modular offices clustered around open collaboration and computing spaces,” according to the KPMB executive design summary. Each department’s technology-enabled active learning (TEAL) classrooms and collaborative spaces will be tailored to its individual needs. For example, computer science (floors 6 through 10) will likely be designed on an open plan, while mathematics and statistics (floors 3 through 5) may have enclosed offices. The Hariri Institute will be housed on levels 11 through 17. 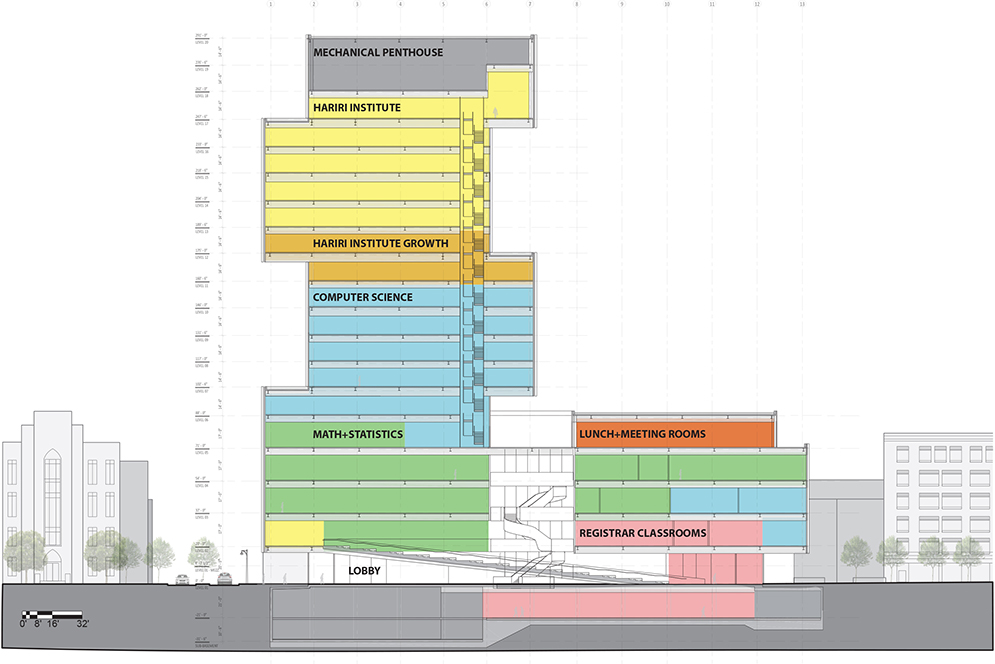 “The building is designed to have flexible spaces for students and faculty to gather informally and have opportunities to collaborate,” says Jean Morrison, BU provost and chief academic officer. “It’s really state-of-the-art space that is responsive to the needs of highly collaborative and interconnected work.”

Central to this initiative are the proposed interconnected collaboration terraces that form a ramp connecting the ground and second floors. These platforms may include furnished seating areas and walls and windows intended to serve as writing surfaces. Other floors may also feature terraces, event spaces, and cafés to establish the building as a public facility, and an indoor-outdoor conference room on the 17th floor will offer dramatic views of Boston and the Charles River. 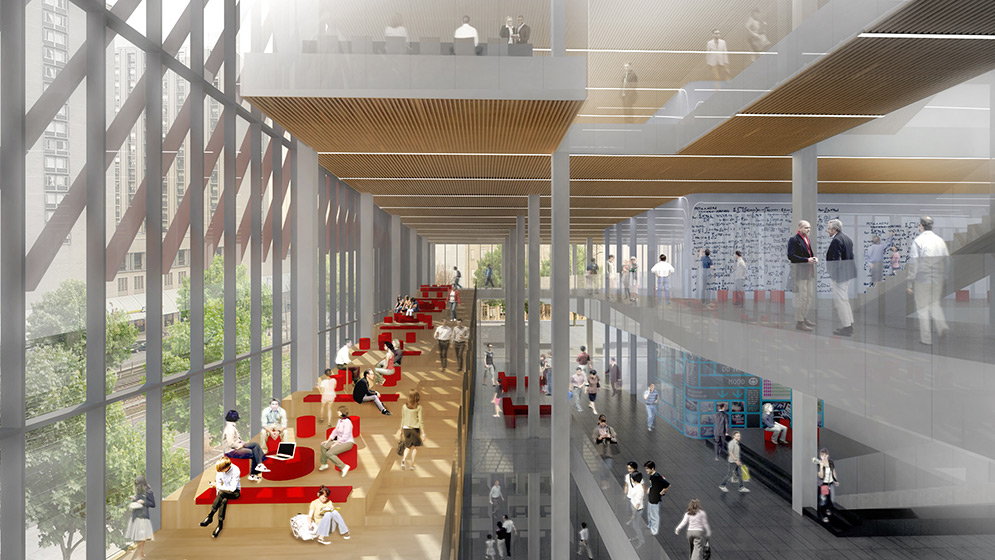 “We’ve spent quite a bit of time thinking about how this building will interact, on the street level, with its surroundings,” Morrison says. The design is intended to transform adjacent Granby Street into a two-way landscaped thoroughfare that will improve access to the new Dahod Family Alumni Center and BU Admissions at the Alan and Sherry Leventhal Center, both on Bay State Road. 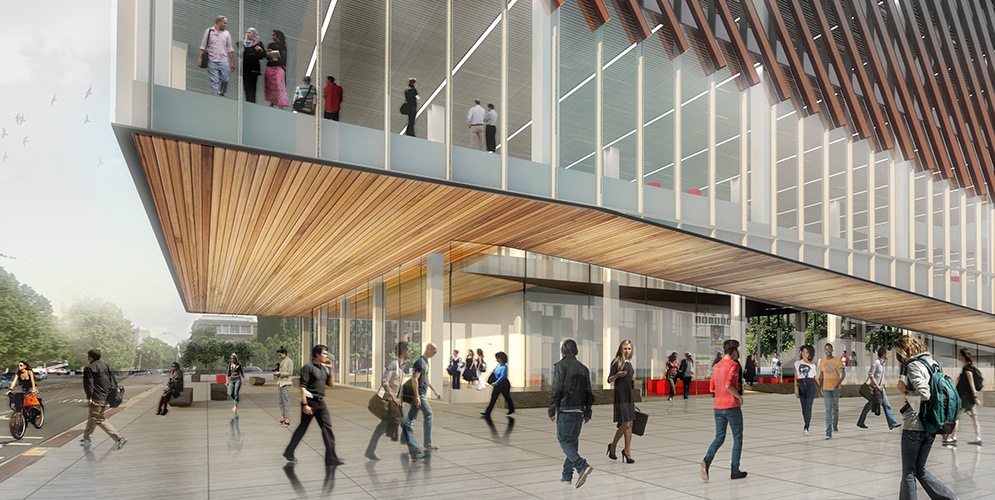 The proposed plans also call for redesigning the park behind the building with terraced lawns, pedestrian ramps, and bicycle storage. “You’ll be able to walk through it to Bay State Road,” Morrison says. “We want the building to be a seamless part of Commonwealth Avenue so students can easily flow in and out of it.” 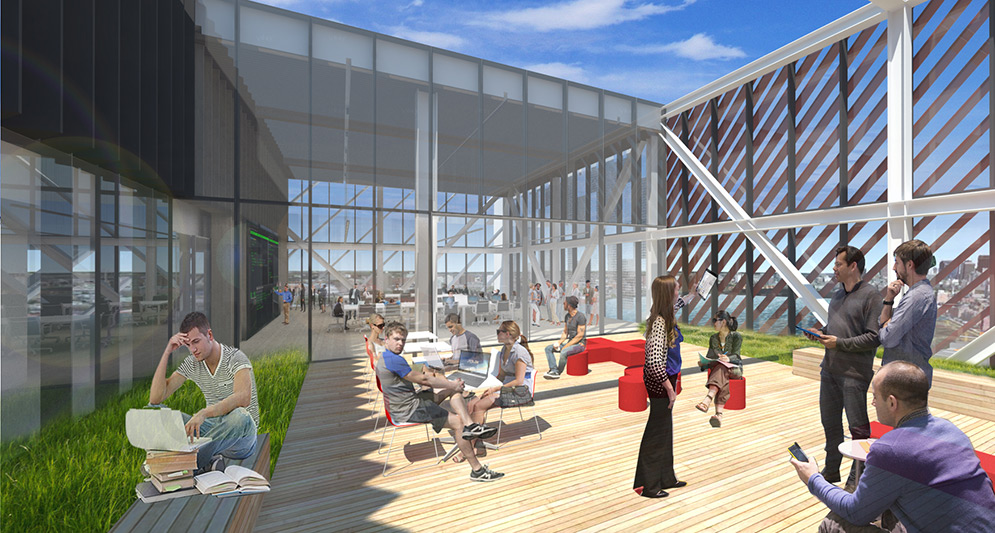 To advance the University’s sustainability mission, the team intends to adopt new green technologies and take into account the risks posed by increases in sea level and climate change (for example, bolstering the storm-water retention). “We’re committed, through BU’s Climate Action Plan, to be responsive to these issues, and we’re working closely with the architects to ensure that the building is responsive to them,” Morrison says.

If all goes according to plan, the Data Sciences Center will promote sustainable practices like reducing potable water use through low-flow and high-efficiency plumbing fixtures and mitigating light pollution by way of light features that comply with LEED requirements. It would also have between 40 and 55 geothermal wells that use the earth’s natural heat to control the building’s temperature. These, and many other aspects of the design, would ensure that the Data Sciences Center would be a 90 percent carbon-free building.

When the BU campus emerges from the snow in spring 2022 and this new building opens its doors, it will mark the University’s new architectural era and its investment in the burgeoning industry at the center of society.

“For us to build a beautiful building at the heart of our campus attests to the University’s growing strength and impact,” Morrison says. “It’s important to our continued growth as a world-class research university that we build the Data Sciences Center, and that it be architecturally significant.” 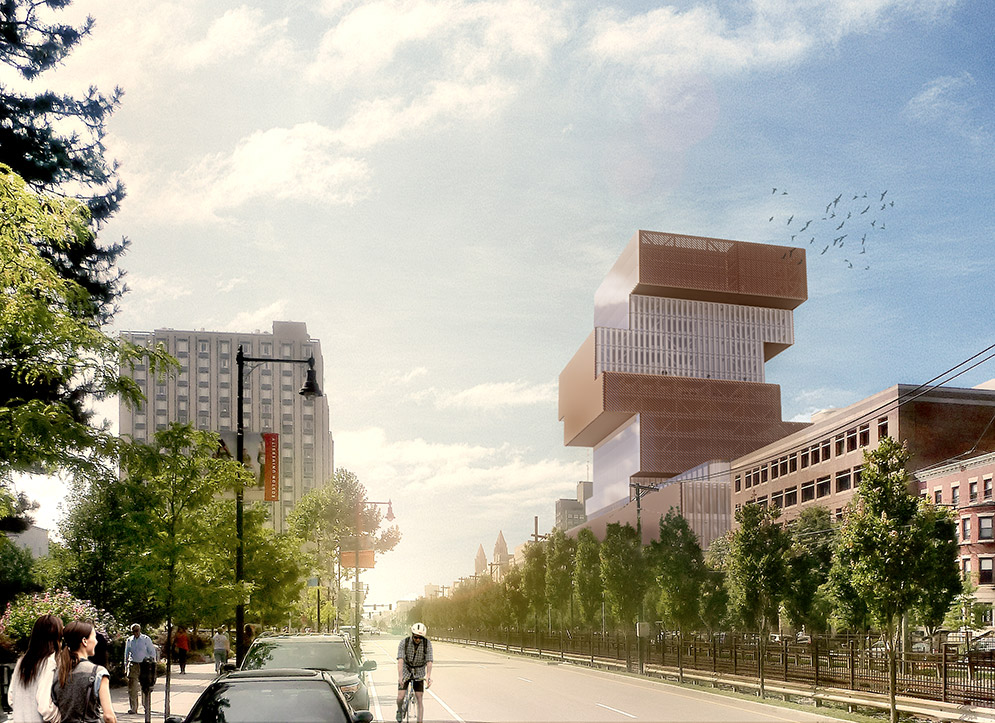 A Big Building for Big Ideas

There are 13 comments on A Big Building for Big Ideas