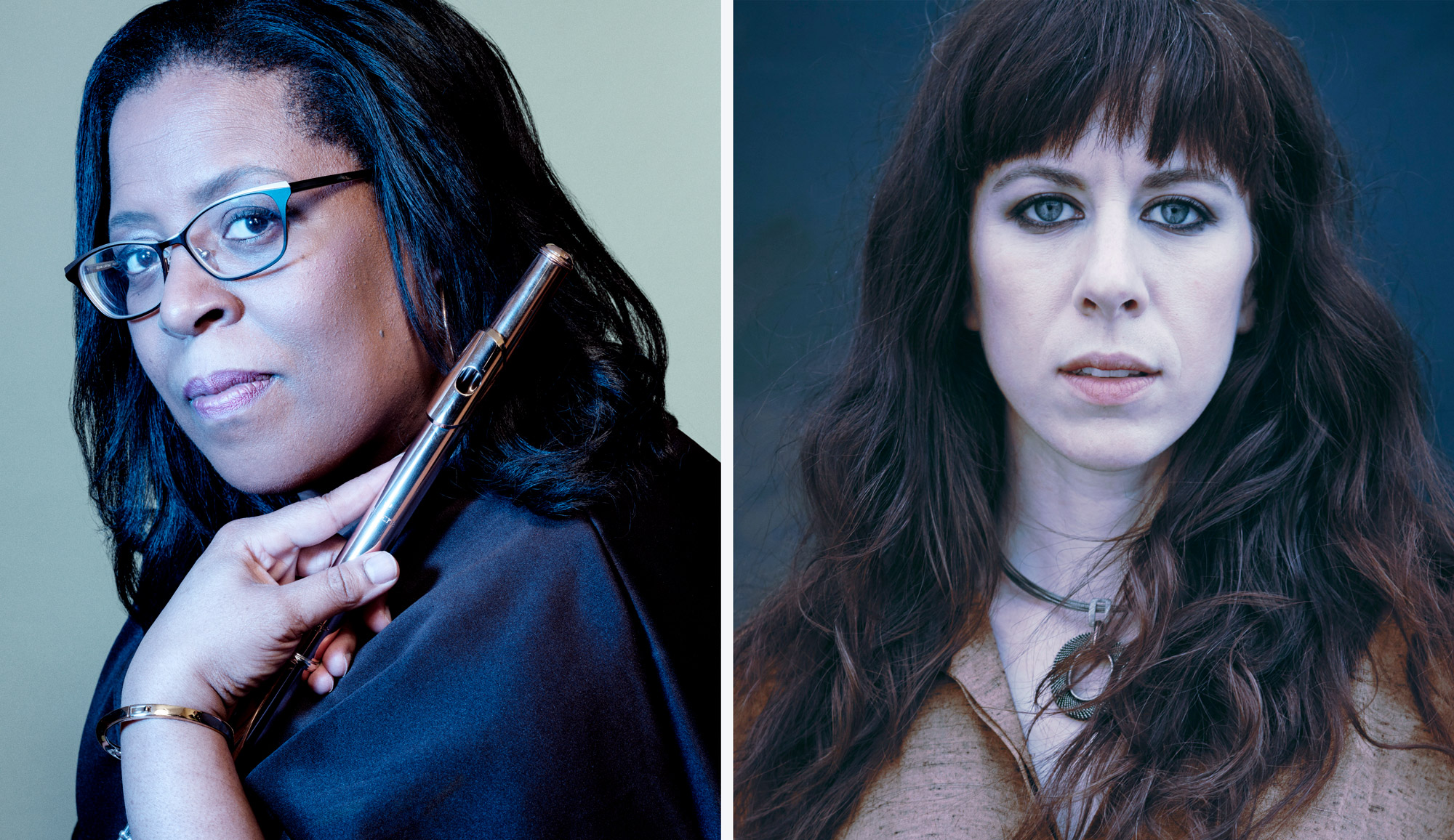 CFA alums and composers Missy Mazzoli and Valerie Coleman discuss the privacy of their craft, the vulnerability of performing

Grammy-nominated composer and flutist Valerie Coleman uses her “skillfully wrought, buoyant music” (New York Times) as a form of storytelling: in one chamber work, nomadic Roma tribes journey along dusty roads while a flute sonata gives voice to slaves trafficked from West Africa. Coleman (BUTI’89, CFA’95) premiered her latest piece, Shot Gun Houses, a suite for clarinet and string quartet based on the life of Muhammad Ali, in 2018.

Missy Mazzoli’s “savage, heartbreaking and thoroughly original” (Wall Street Journal) music is distinctive for its ferocity that veers into horror, like her opera dismantling the American dream through the story of 19th-century Nebraskan homesteaders and an operatic work reimagining the story of Lot’s wife. Recently named composer-in-residence at the Chicago Symphony Orchestra, Mazzoli (BUTI’98, CFA’02) premiered her newest opera, Proving Up, in 2018.

Mazzoli and Coleman were both listed among the top 35 women composers in classical music by the Washington Post in 2017. Their work has been performed at Carnegie Hall and the Kennedy Center, among other venues, though never in the same season. Mazzoli is the founder (and keyboardist) of the all-female chamber music ensemble Victoire. Coleman is the founder (and flutist) of the Grammy-nominated all-female chamber music ensemble Imani Winds—which has performed Mazzoli’s music.

Although their paths have crossed musically time and time again, they’ve never met. They’d never even spoken until they connected by phone to talk about the addictiveness of the flow state, how motherhood influences creativity, and finding inspiration while surfing.

Missy Mazzoli: I’ve known of you for so many years. It’s nice to talk to you, finally.

Valerie Coleman: Yeah! This is great.

Mazzoli: In my own work, performing, teaching, and writing are all essential. I can’t give any of it up because it’s all part of the puzzle. If I weren’t performing, my writing wouldn’t be as rich and I’d feel like I was losing touch with my performers. How do you look at the puzzle of your life?

Coleman: I would say that one has to celebrate the imperfections of juggling all of it. For example, motherhood is a wonderful thing, but it’s also a challenge to find headspace when your daughter’s decorating the house with bits of paper—but even in that moment, there’s an energy that can be inspiring.

Mazzoli: I love this idea of embracing the imperfection of it all. Similarly, a long time ago, I accepted that I would not be the greatest pianist in the world, and that’s actually good because it forces me to come up with creative pieces, turning these quote-unquote imperfections into an asset and creating something new out of them.

Coleman: Your music touches on the human experience and juxtaposes soulfulness and peacefulness with energy-laden moments—that’s really exciting to hear. What motivates you?

I think human beings are the most inspiring thing in the world. I’m interested in how we’re flawed.

Mazzoli: I think human beings are the most inspiring thing in the world. I’m interested in how we’re flawed, how we try to communicate and often fail, how we try to fix things and mess everything up, how we relate to each other in really beautiful ways—but also evil ways. All of that has been fodder for my operas and my instrumental works, like two melodies working with each other and then in opposition. It’s like a drama playing itself out.

Coleman: You hit on something that deeply resonated with me: communication and opening someone’s mind to another’s experience. It seems more relevant than ever for creators to be empathetic, to step out of our own comfort zone to be that mediator.

You put together the Victoire ensemble as the voice of your music. Tell me everything! What’s the logistical structure of the dang thing?

Mazzoli: I put it together 10 years ago, soon after I moved to New York, because I wanted control over where and how my music was performed. I thought, “I can’t just wait around for Carnegie Hall to call me”—which they did, eventually, because I was so visible with this ensemble I’d made myself.

I wanted a social life around my music, to pull together five of my best friends who I can feel vulnerable around. I also wanted to work with women. When we go on tour, it’s a loving and accepting and fun experience. It became a lab through which I developed my voice.

Coleman: Do you feel more of a connection with your audience when you’re performing your own work?

Mazzoli: Absolutely. People connect with what they see in front of them, that sharing of kinetic energy. I found that a lot working with [chamber music ensemble] Imani Winds; when they perform my music, people start to see not only what a living composer does, but the energy behind it.

Mazzoli: I love that idea.

Coleman: People don’t connect with what a composer does, the creative process of stripping yourself bare to create a new entity that impacts the listener’s emotional value. That state of impacting the people around me keeps me going as a composer. The psychologist who coined the term flow says it’s the state of being in which a person is involved in an activity to the point that nothing else seems to matter because the moment itself is transcendent. That’s what I think people feel when a composer performs their own music.

Coleman: That flow state is addictive. Part of me loves the private nature of composing because it’s something no one else can touch, sort of like meditation. But I also love bringing it to other people.

Mazzoli: As you get older, you start to value time more. In the midst of the world spinning around you, it’s hard to find flow unless you retreat into that insular bubble that allows you to be completely vulnerable.

Coleman: Once the piece is done, the vulnerability is there for everyone to see and to feel vulnerable themselves in a cathartic way.

Part of me loves the private nature of composing because it’s something no one else can touch, sort of like meditation.

Mazzoli: How does being a mother impact that flow?

Coleman: It’s made me harder in letting people know that what I do is as valid as anybody else’s nine-to-five job. I hunger for that flow state, so if I don’t get it, I become aggressive about it.

Aggressive, not in terms of my child, but in terms of ensuring she has a sitter who’s present and letting my husband know that this is my time. Before my daughter was born, I was more flexible; the flow came when it came, and I could stay up all night and write music. I’ve become much more efficient and more hard-nosed about what time is sacred.

At the same time, having my daughter and being introduced to a love that has completely unseated me has influenced my creative process. Now more than ever there’s a certain level of giving that goes into writing music.

Mazzoli: It’s inspiring to hear you talk about being a creator who’s also a mother, who’s thriving, and whose work is informed by that experience in a positive way.

Coleman: Thank you—and congratulations on your appointment as composer-in-residence at Chicago Symphony Orchestra, man! Can you tell us a little bit about that?

Mazzoli: I’ll be writing music for the symphony, and I’m curating their MusicNOW chamber music series. It’s an opportunity to commission exceptional up-and-coming composers, a lot of them women who have yet to be celebrated by a major symphony orchestra.

Coleman: There are so many levels of why we have to be mentors in this day and age.

Mazzoli: I agree. I founded a program, Luna Lab, for young female composers in their teens, on a similar premise. When I graduated from CFA I thought, “If this works out for me, I’m going to use my influence to make it easier for young women coming after me.”

I had great teachers my whole career, like Martin Amlin [a professor of music and chair of the composition and theory department] and Richard Cornell [a professor of music, composition, and music theory] at CFA. Martin was the first person in my life to say that I might have a future in music. And I was like, “All right, I’m in. I’m doing this.”

Who were your mentors?

Coleman: [Composer and conductor] Tania León. She’s this force of nature unto herself. I can’t tell you how often she’s reduced me to tears because of the conviction with which she’s dedicated herself to changing classical music to be more inclusive and celebratory of people and ideas that are different. This is an exciting time for women composers. This idea of helping one another is starting to manifest in such an impactful, grand-scale way.

Mazzoli: I’m inspired by stories of endurance and achievement. The news is a big source of inspiration—I look for little nuggets of humanity there. I also surf. That’s the ultimate flow for me because I can’t really think of anything except not dying. I feel very free out there; I’m not competing with anybody when I’m on a surfboard.

Mazzoli: When’s your next premiere?

Coleman: It’s Phenomenal Women [concerto for wind quintet and chamber orchestra], based on a poem by Maya Angelou, with Imani Winds and the American Composers Orchestra in November [2018]. What about yourself?

Mazzoli: I’ll premiere a new work with Chicago next season, and my third opera is coming to New York in September [2018], so I’m getting ready to do the things, like promotion, you have to do to nurture these little babies.

Coleman: After you wrote the piece, now comes the harder stuff. You can’t just let them go into the world, you have to nurture them. It’s so much work, but so exciting.

Mazzoli: I feel really energized, really clear, like we should talk every morning.

This conversation has been condensed and edited for clarity.

Composer to Composer: CFA alums and composers Missy Mazzoli and Valerie Coleman discuss the privacy of their craft, the vulnerability of performing

Composer to Composer: CFA alums and composers Missy Mazzoli and Valerie Coleman discuss the privacy of their craft, the vulnerability of performing
0
share this