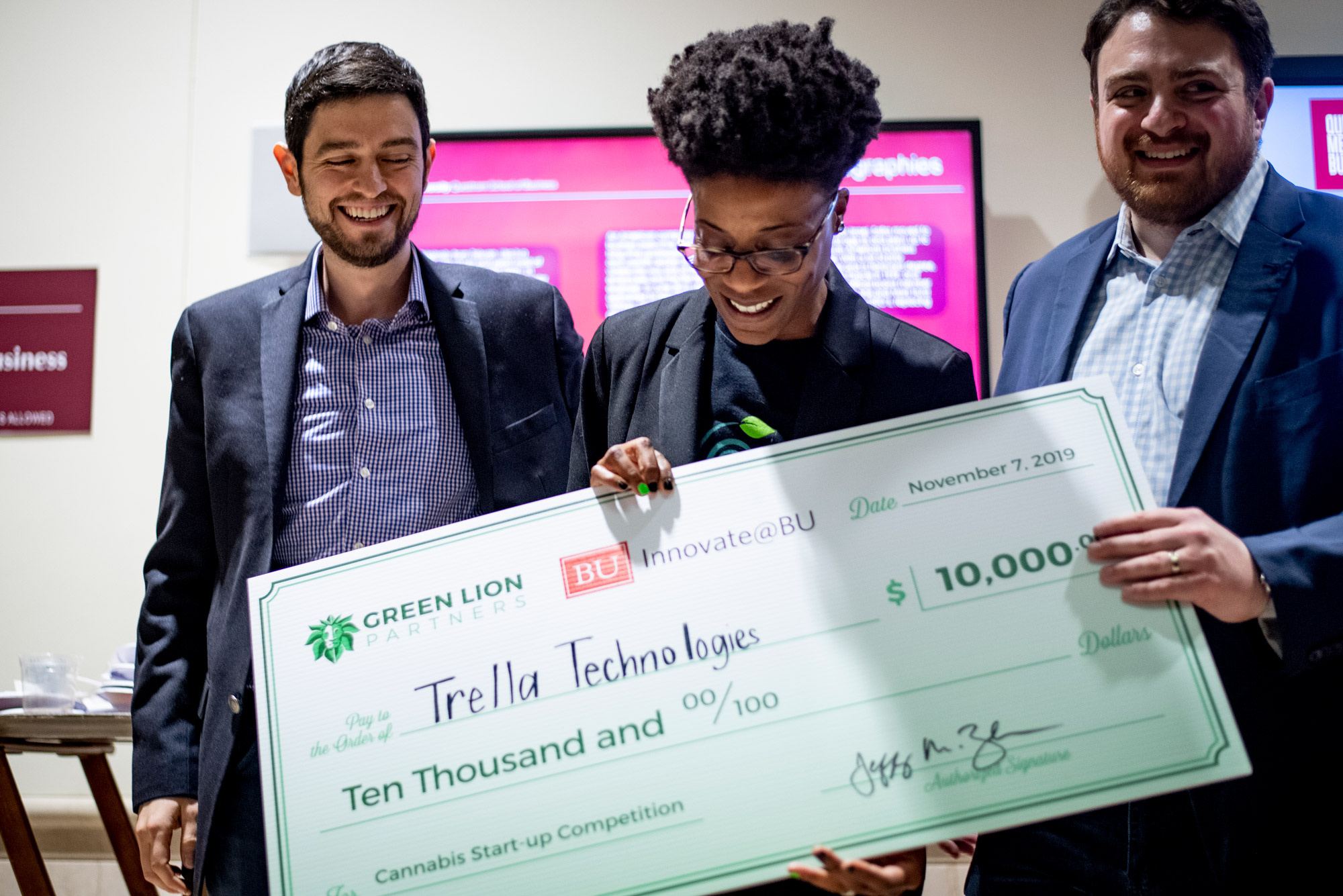 As rain fell outside, more than 120 people filed into the Questrom School of Business auditorium last Thursday for the third annual Innovate@BU Cannabis Start-Up Competition. The popular event provides a platform for BU-led start-up teams to present their businesses in a think-tank-style competition, with a prize of $10,000 and mentoring help up for grabs.

This year’s winner was Trella Technologies, a company founded in 2016 by Aja Atwood and Andres “Dre” Chamorro III that offers an automated horizontal plant-training system aimed at easing the process of indoor cannabis production. The device uses low-stress training to “automatically train a tall plant to grow in a small space,” Atwood explained.

The system enables growers who use a vertical stacking setup to more easily manage the plants and increase their growing capacity. Trella has also developed an app that helps users track the progress of their plants. Atwood collaborated with BU alums Nina Hrebenko (CAS’13, GRS’17) and Angela Pitter (ENG’86).

For Atwood, the win was a validation of her years of work.

“It means that I’m not crazy,” she said. “People understand what we’re doing and see value. The judges are highly respected in this space, so to have their input, to have their feedback, really helps legitimize the ideas that we’re trying to do. It’s the very beginning step—this will help us move on to the next stage.”

The competition comes as public support for legalizing marijuana continues to grow. In Massachusetts, marijuana is legal for people 21 and older, but there are a number of critical stipulations about what is and is not permitted. According to a recent study by Politico, “A majority of Americans either have or soon will have access to legal marijuana—for medical use in 33 states, and for ‘adult’ or recreational use in 11 states and the District of Columbia.”

The contest was sponsored by the Denver-based cannabis business strategy firm Green Lion Partners, operated by Jeff Zucker (Questrom’10) and Mike Bologna (Questrom’10). It is open to BU student or alumni-led ancillary cannabis start-ups—those that don’t actually grow or sell marijuana. More than 25 groups applied, and the 5 finalists presented to a three-judge panel. Each team had six minutes to present and four minutes to answer questions from the judges.

The judges, all returning from last year’s competition, were Kim Napoli, a Massachusetts attorney and cofounder of Cambridge’s The Hempest store; Jaime Lewis, a managing partner of Coldwater Consulting and former COO of a large Colorado dispensary; and Peter Bleyleben, a partner at Converge Venture Partners, the only judge without experience in the cannabis industry.

The event began with speeches from Gerald Fine, executive director of Innovate@BU and a College of Engineering professor of the practice, Zucker, and leaders from Students for Sensible Drug Policy and the Massachusetts Recreational Consumer Council. Attendees also heard from representatives of the competition’s previous winners, Cannabis Care and Community Network (C3RN) and Mary’s List.

Each of the speakers and presenters represented different niches of the cannabis industry, but one message prevailed throughout the evening: the opportunities with cannabis are legion.

“With this competition, we aim to show that cannabis offers a true professional career opportunity for anyone,” Zucker said in his opening remarks. “We hope that this sends that message, and having BU’s support is a big part of that.”

He emphasized incorporating the idea of “social good” into business. Many of the presenters highlighted their companies’ philanthropic efforts, some even promising to donate a portion of their profits to charity.

“Social advocacy is a really big part of what we do,” Zucker said. “It’s a crucial part of being involved in the cannabis industry.”

While the judges deliberated following the presentations, attendees networked and enjoyed refreshments in the Questrom atrium. When the judges had reached a decision, Zucker and Bologna reconvened the crowd to announce the winner and present Trella’s Atwood with a $10,000 check.

“Honestly, this is the future,” Napoli said. “We’ve been waiting for cannabis to be legalized for so long. We’re finally here, and now we have students that are interested. Boston University getting involved gives the competition credibility, and for me, it’s just such an opportunity.”