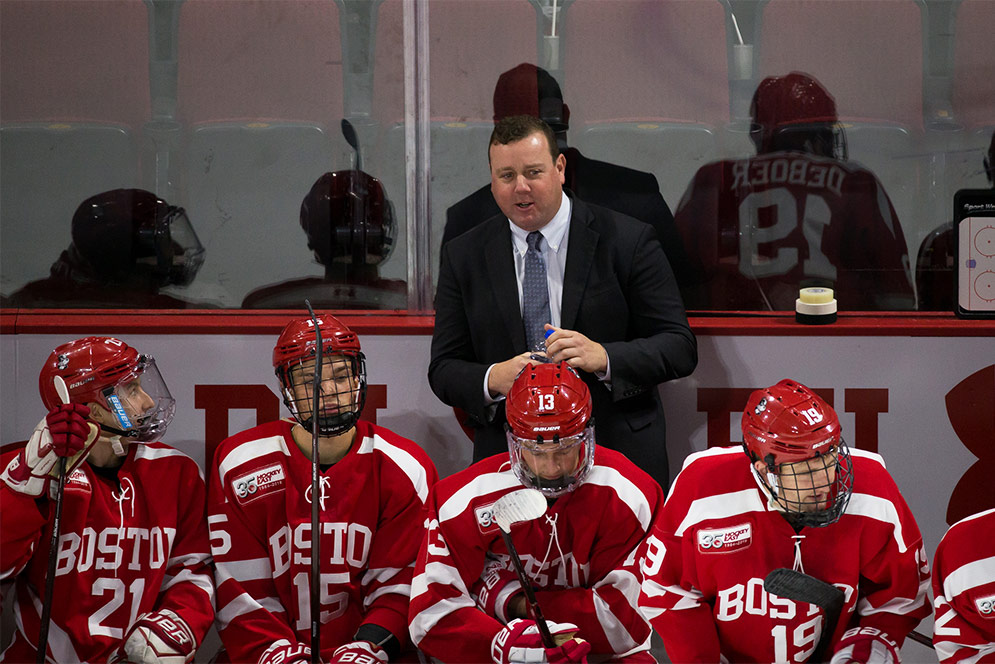 As head coach of the Terriers, says Albie O’Connell (CAS’99), “I’m not gonna change who I am.” Photo by Rich Gagnon

“Being at BU is the ultimate,” Albie O’Connell says, and for a hockey guy, that’s especially true this time of year.

O’Connell (CAS’99) played on four Beanpot-winning BU hockey squads and a Hockey East title winner for legendary longtime BU coach Jack Parker (Questrom’68). He was an assistant to head coach David Quinn (CAS’89) in 2015, when the Terriers last took a Beanpot. Now, in his first season as head coach, he has his sights on that coveted trophy.

“It should be fun,” O’Connell says. “I’ve been in a lot of them—good nights, bad nights. Hopefully there are good nights ahead for us this year.”

On Monday night the Terriers head into the 67th Beanpot Tournament at TD Garden for an 8 pm tilt with Northeastern, last year’s Beanpot winner. They beat the Huskies once and tied once in two November games. “Northeastern’s a really good opponent, and they’ve got a very good goalie,” O’Connell says. “But right now we’re worried about us more than the guys we’re playing.”

As of this past Monday, after splitting a pair of weekend games with Arizona State University, BU was 10-10-3 for the season, but the trend is upward, with an 8-5-2 conference record, 4-2-1 since the new year, including a win at Providence and one at home versus Merrimack, both teams that beat them earlier in the season. After an up-and-down first half of the season, O’Connell feels his team is playing better than the record reflects.

The Terriers take on top-ranked UMass at Agganis Arena on Friday night, and he knows what needs work and what doesn’t. The team is generating plenty of offensive chances, even if the puck doesn’t always get into the net. “Defensively, on balance it’s been pretty good once we get into D-zone,” he says. “It’s just coming back in there and being organized.” He’s happy with improvements in the face-off game and the power play since the beginning of the season.

“We’ve had stretches where we’ve played well and just haven’t had the results we wanted,” he says. “That’s why you play the full season.”

“I think there’s a learning curve with all head coaches in their first go-round,” Marrochello says. “He’s a great fit, he’s getting better every day. I think things are going great. I don’t get caught up in the day-to-day. I just look at improvement over time, I look at how the team plays well together, I look at how these freshmen are jelling.” 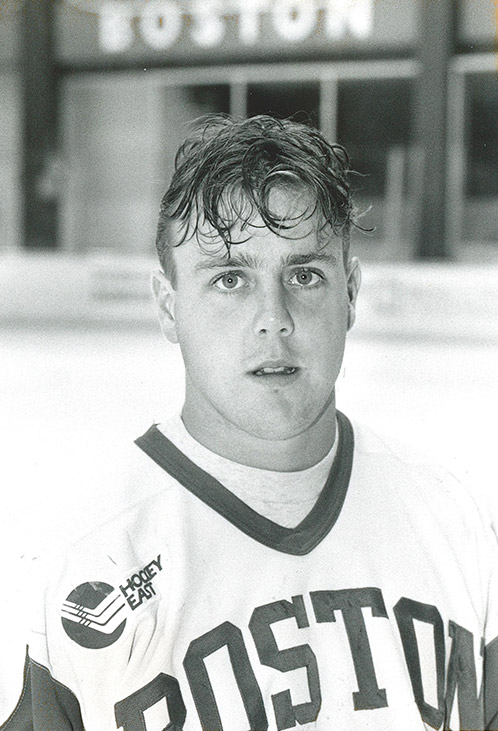 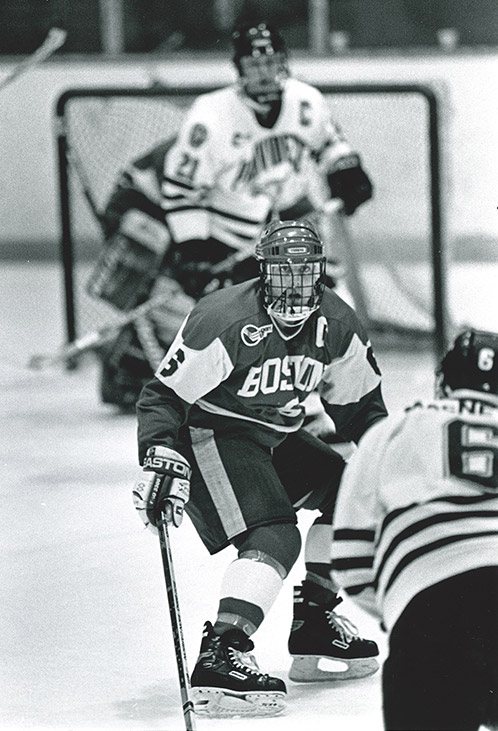 It’s clear the players are glad O’Connell got the job. “He can relate to us a lot, obviously, because he played here,” says goalie Jake Oettinger (CGS’18, COM’20). “He’s pretty young and he knows most of the guys pretty well from recruiting them. He’s a good relationship guy, one you don’t feel awkward talking to, or like you’re talking to the principal. Just having that communication is really nice.”

And why not? O’Connell grew up in nearby Watertown dreaming of coming to a Beanpot school. In 149 career games at forward for the Terriers, he totaled 108 points (42 goals, 66 assists) under Parker. As a senior captain, O’Connell led the 1998–99 squad in scoring, with 39 points (9 goals, 30 assists), and he played in two NCAA Frozen Fours and helped the Terriers claim the Hockey East title in 1997.

Players have changed since his day, he says, in part because BU has grown, and because of how kids are being raised today.

“It’s a different demographic than when I was here,” he says. “We had a lot of city kids, a lot of blue-collar families. We get kids from all over the world now, so you get a lot of different personalities, a lot of different backgrounds. It was more multisport kids then—they played a little hockey, a little basketball, a little whatever in the schoolyard. Now you’ve got kids who specialize in one sport, so they’re unbelievably skilled and talented, but sometimes, you know, when it comes to just making a five-foot pass, they’ll stickhandle five times before they make the pass. Whereas if they’d grown up playing basketball, they would move the ball.

“We’ve got a good group of guys, though. Consistently, hockey players are a pretty good group. You get an ego from time to time, but for the most part you get pretty humble guys.”

A groundswell in the BU hockey community

A fifth-round draft pick of the New York Islanders in 1994, O’Connell played professionally for several teams, among them the Pensacola Ice Pilots (East Coast Hockey League) and the Basingstoke Bison (British National League). In 127 pro games, he rang up 54 goals and 78 assists, for 132 points. He began his coaching career at Berkshire Prep School in 2002, followed by assistant coaching stints at Colby, Niagara, Holy Cross, Merrimack, Northeastern, and Harvard.

Considered one of college hockey’s top recruiters, O’Connell returned to BU in 2014 as an assistant under Quinn and was named associate head coach in 2015. Among the Terriers he helped develop were Olympian Jordan Greenway (CGS’17) and All-Americans Jack Eichel, a Hoby Baker winner, Matt Grzelcyk (COM’16), and Charlie McAvoy.

When Quinn left, BU looked at a bunch of well-known names in the college and pro ranks, many of them alums, to become the program’s 12th head coach. But Marrochello says there was a groundswell for O’Connell in the BU hockey community.

“It’s nice to see someone who has worked as hard as he has and meant so much to BU as he has get rewarded for all his hard work,” Quinn says. “I think BU is very fortunate to have a guy like him, who has paid his dues, who cares about the players the way he does, and I think the program is in great hands.”

And advice for O’Connell on his first Beanpot? “The good news is, he’s played in it, he’s coached in it, but it’s a little bit different when you’re the head coach, for sure,” Quinn says. “He’s going to feel a little extra pressure. But once the puck drops, it’s just another game, and he’s going to do what he does best.”

O’Connell has already learned that it’s different when it all rests on your shoulders. “It’s been a pretty good learning curve,” he says. “A lot to manage, a lot to do from the day-to-day standpoint. I always asked myself, what does Quinny actually do? There’s a lot of behind-the-scenes stuff, and managing the staff and the players. The guys are doing a good job in the community, they had a good showing academically this semester. That’s an important piece for the program, my staff, and myself.”

One big change is that he’s spending a lot less time on the road recruiting, leaning more on associate head coach Paul Pearl and assistant coach Len Quesnelle. “It’s honestly really weird not to be able to go, because I’d done it for 15 years and dictated my own schedule,” he says, “and now the schedule is something I have to create for the group and stick with it and be at the different events. My phone still rings off the hook from coaches, advisors, agents, people calling me about players. Because I had that relationship with people. And I’m like, I can’t.

“If I don’t get to travel a little more, I think my wife is going to…” He laughs instead of finishing the sentence. “No, it’s good, it allows me to be home a little more. Do I miss going on the road? I do for sure. I like recruiting, I like evaluating players, I still do it when I can. But I’m not out there as much.”

The biggest difference between him and his predecessor? “Personality,” O’Connell says. Quinn, with a laugh, agrees: “I’m probably more outgoing, more vocal than Albie, more emotional. Albie’s more subdued than I am.”

“He doesn’t come out of central casting,” Marrochello says, “and that’s not a negative assessment. A lot of his references said that, that he’s a deep hockey mind.”

At a recent practice, it’s hard to tell who’s the head coach. O’Connell wears sweats and a wool cap and lets the assistants run most of the drills. When he wants to talk to a player, he does it quietly, the two of them skating slowly around the rink, both looking straight ahead.

“If it’s a teaching point for the whole team, you have to be loud,” he says. “If it’s an individual’s mistake, then you coach the individual. If I blow the whistle every two seconds, then the pace of the practice gets poor, people get bored, and I get aggravated.

“I’m not gonna change who I am. If I was trying to be someone I’m not, that’s just not going to go well. If you’re going to do it, you gotta do it your way.”

The 67th Annual Men’s Beanpot Tournament begins Monday, February 4, at TD Garden, 100 Legends Way, Boston. BU plays Northeastern in the second game of the semifinals at 8 pm, following the BC-Harvard showdown at 5 pm. The games will be broadcast live on NESN and WWZN 1510 AM, and BU’s games will also be broadcast live on WTBU Radio (640 AM and 89.3 FM) and on the web here. The second round is Monday, February 11, also at TD Garden, with the consolation game at 4:30 and the championship game at 7:30 pm. Tickets are available at Ticketmaster here.

The 41st Annual Women’s Beanpot Tournament begins Tuesday, February 5, with BU playing Northeastern in the first game of the semifinals at 5 pm, and BC taking on Harvard at 8 pm. Games will be broadcast on ESPN+ and on WTBU Radio (640 AM and 89.3 FM). The second round is Tuesday, February 12, with the consolation game at 5 and the championship at 8 pm. All games are at Harvard’s Bright Landry Hockey Center, 65 North Harvard St., Boston. Tickets are available here.