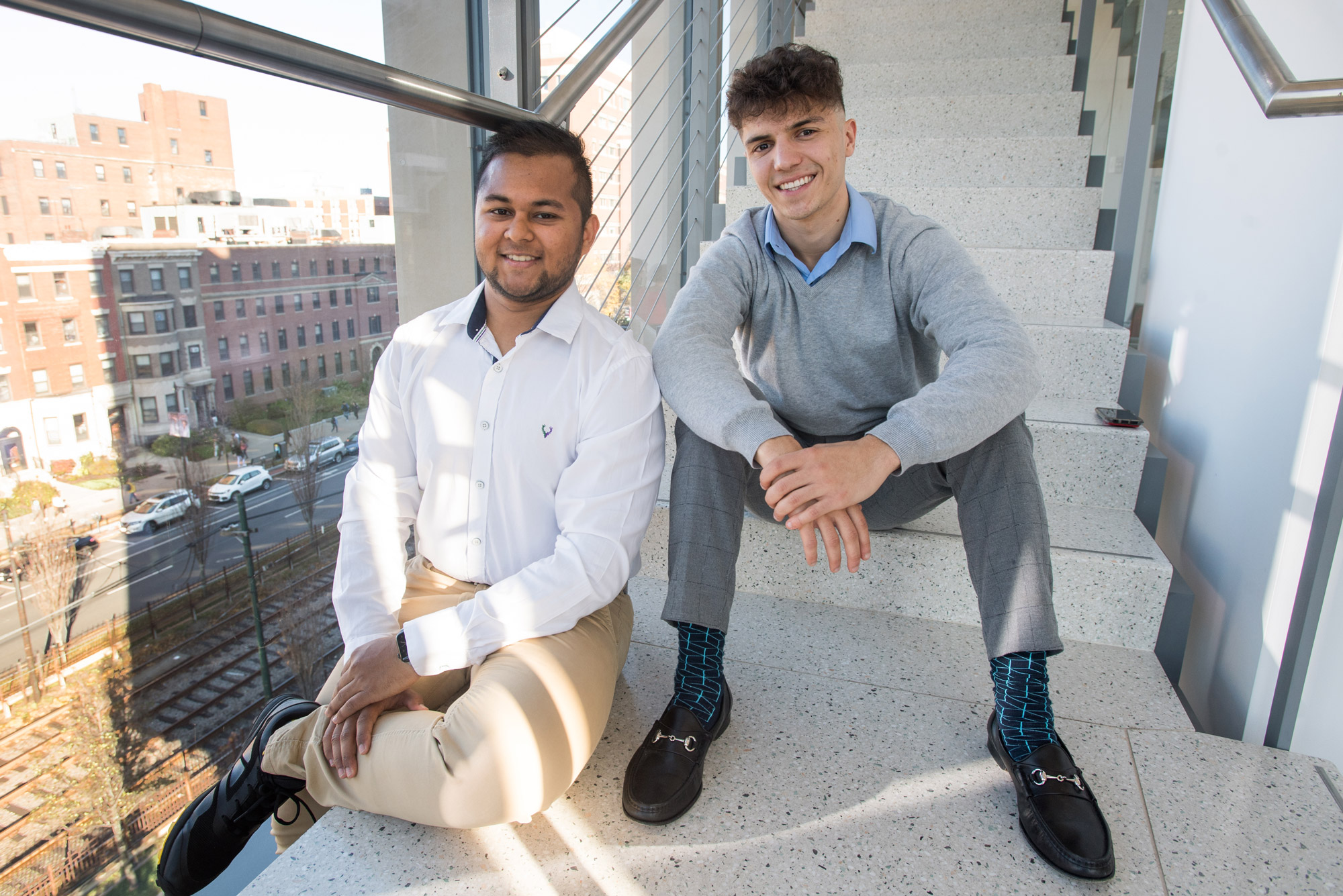 Austin Negron got an urgent call from his grandmother a few weeks back. A native Spanish speaker, she was applying for a housekeeping job and had hit a roadblock since the application was in English. Negron translated the form for her. He recalled their conversation weeks later when he was getting ready to compete in the HackHarvard hackathon in October. “I researched, and found out there are 45 million people in America who don’t speak English,” Negron (ENG’21) says. “There are so many people who don’t have a grandson who knows English and can help them fill out these applications.”

Wouldn’t it be cool, he thought, if there were an app that could take a job or college application, translate it into the user’s native language, and then convert the finished product back to English for submission?

Meet Phillinda.space, an app Negron cocreated with Rishab Nayak (CAS’21) and Northeastern students Sebastian Münchow and Daniël Trujillo at the HackHarvard event. The app allows a user to upload documents, which are then converted to their native language using Google Translate. After the user types in their information, the fields are translated to English and the document is ready for download and exporting.

Phillinda.space wound up taking home the top prize at HackHarvard.

“When we were quickly making the decision of whether or not to develop this app at the beginning of the hackathon, we did some research,” Negron says. “There are translation services out there, but we realized our app was more unique, immediate, and useful. We even asked some of the international students at the HackHarvard event, and they talked about needing a translator when they applied for college. That’s when we knew we were on to something.”

Negron describes HackHarvard as high energy and fiercely competitive, since hackers know that reps from Google and other companies are there on the lookout for what could be the next big app. The event’s judges, he says, place a premium on apps that address new or underserved issues. His team beat out 90 other projects for the top prize and took home a Nintendo Switch Lite, a Google Cloud backpack (which isn’t even sold at the Google store), and a plaque that is now proudly on display in the University’s BUild Lab. The four also won an award for best use of the Google Cloud API.

Negron says they also competed for a naming prize handed out by domain.com. His initial thought was to call it something like “iNeedSome.space,” but they wanted something a little more creative. “After thinking about how we were doing something with filling in documents, I really started playing around with words and trying to incorporate ‘.space,’” Negron says. “In these documents, you fill in the space, hence ‘Fillin’ da space,’ which led to Phillinda.space.”

At one point during the hackathon, the team hit a wall. They originally intended Phillinda.space to be voice-activated as well, so a user could speak and voice recognition software would automatically fill out the form. But they were stymied because Phillinda.space is a mobile app, and they were forced to use the limited libraries provided by the phone manufacturers. They abandoned the voice activation idea and continued using Google’s open-source UI software development kit Flutter.

Each team member pitched at the end, led by Negron. “An underrated thing at these events is how you go about pitching,” Negron says. “Regardless of how good your product is, it’s all about the pitch. I spoke from the heart, and talked about my grandma and talked about the research we did showing that millions of other Americans have this problem, too. People seemed to really enjoy our presentation.”

Nayak says Phillinda.space resonated with judges because of its social angle. “When you try to solve a problem that people are actually facing, not only does it make you feel good, but it makes you more inclined to work on the project and see it through,” he says. “In our pitch, we spoke about how language really affects people. We talked about how the cycle of poverty ultimately begins with not being able to understand English, because if you can’t communicate your ideas, you go nowhere. So that’s what we were trying to solve.”

The app is still in the development stage, and Nayak and Negron are working on it as part of their start-up Toku. They have another app in the works through Toku that is trying to simplify the apartment rental process for college students. “The underlying issue we work on is social good,” Nayak says. “We want people to achieve what they want to do, and in the easiest way possible.”