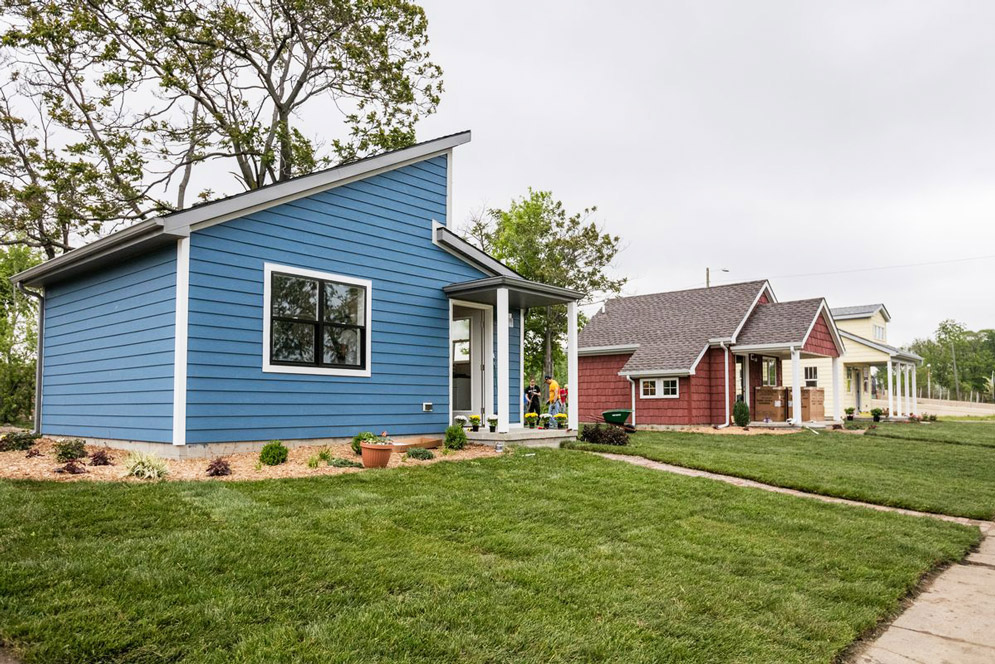 Cass Community Social Services plans to build 25 unique tiny homes no bigger than 500 square feet in a blighted northwest Detroit neighborhood in the next five years; six are already built and six are currently under construction.

The house is tiny, just 350 square feet, but to Gladys Ferguson, it feels much bigger. The widowed 64-year-old loves her yellow miniature Colonial, with its new appliances, air-conditioning, and its own little garden. And if she continues to pay $350 a month for seven years, she will own it.

Ferguson’s house, in a blighted corner of northwest Detroit, is one of two dozen such homes under construction by Cass Community Social Services, a Detroit nonprofit led by 58-year-old Methodist minister Rev. Faith Fowler (STH’86). While the little homes look like those tony miniatures featured on cable TV—one is a shrunken Tudor, another a scaled-down Victorian—these weren’t built for baby boomers looking to downsize or young couples on a budget. The occupants are the Motor City’s poorest residents, formerly homeless people, and others living in poverty.

“Our goal is to target folks who are ready to move out of the shelters or bad rental situations,” says Fowler. “We were, probably still are, the only agency to provide ownership opportunities for people making as little as $8,000 a year.”

That’s less than what’s required for a home through Habitat for Humanity, the well-known nonprofit promoted by former president Jimmy Carter and his wife, Rosalynn. It’s also an idea that has put Fowler in the national spotlight. Stories about the project on PBS, CNN, and other outlets have drawn busloads of tourists. A Facebook video about the project posted after construction of the first house in 2016 has been viewed more than 42 million times.

Fowler says it’s been a wild ride. She recently self-published Tiny Homes in a Big City, both as a guidebook and a response to an outpouring of comments questioning the merit of giving homeless people free houses and naysayers who simply think the idea is doomed.

“The Cass Tiny Homes project is a pilot program, an experiment if you will. It may not work or it may need to be modified over time,” she writes. “Ours was a calculated risk.”

Getting along vs getting ahead

Fowler grew up in Detroit and its suburbs, the granddaughter of a man who survived polio as a child and unemployment as a young man and died a wealthy businessman. While she sees a hopeful role model in his pull-yourself-up-by-your-bootstraps story, she’s not sure that it could happen today.

“We live in a different time,” she says. “Large numbers of people, despite amazing drive, resilience, and hard work, do not experience comebacks or economic mobility. While polio no longer plagues the United States, poverty does.”

Wages have been stagnant for 40 years, she says, and incomes have not kept pace with spiraling healthcare costs. One in five children in the United States lives in poverty, and the majority will remain there.

Fowler says her decades of community work in Detroit have shown her that many disadvantaged people can make progress toward financial stability until a major setback occurs in their lives, like having to pay for a relative’s funeral, needing car repairs, or losing a job. When that happens, they turn to one of Cass’ traditional safety net programs, like its shelter or food pantry.

“I’ve spent most of my waking hours with very poor people,” Fowler says. “I found that we could help people get along. What we couldn’t do is help them get ahead.”

And helping people get ahead is a big part of a religious calling that Fowler says she felt as early as junior high.

Take a peek inside this tiny home. The first ones built accommodate one or possibly two people comfortably in no more than 400 square feet of space.

Painfully shy, she says she didn’t take action on that calling until she graduated from Albion College and had a job counseling at-risk and abused youth. When a minister in the program couldn’t give a scheduled sermon and asked if she would fill in, Fowler conquered her fear of public speaking and decided to pursue a life of ministry. The next year, she enrolled in the School of Theology, drawn by its Methodist history and the social justice legacy of BU’s most famous alumnus: Martin Luther King, Jr. (GRS’55, Hon.’59).

After graduation, the Methodist Church assigned her to the Cass Community United Methodist Church in Detroit, which ran a nonprofit offering social services, later named Cass Community Social Services. Today Cass has a $6.9 million annual budget. It operates a residential program for homeless men with HIV/AIDS, as well as a plant that employs 80 people who recycle tires into welcome mats and flip-flops or grow and sell a private label herbal tea.

Cass’ services are badly needed in Detroit, a city that filed for bankruptcy protection in 2013 and nearly five years later has more than 80,000 vacant lots and abandoned buildings. One third of its households have an annual income of $15,000 or less, and people pay what Fowler calls an obscene proportion of that income for rent.

She doesn’t recall how she first heard of tiny houses, but says she was intrigued by the idea and started visiting communities around the United States geared toward helping the homeless. One was Occupy Madison, a mobile tiny house village in Madison, Wis., and another was Quixote Village in Olympia, Wash., an area of 30 identical micro homes funded by government sources.

She liked what she saw, but was concerned about the village concept, thinking that segregation often brings a stigma. Cass spent $15,000 to buy much of a nearby neighborhood that was a collection of empty and abandoned lots. The agency has subdivided it into tiny house lots just 30 feet by 100 feet.

Fowler raised the money from private sources, foundations, and other donors, including $400,000 from the Ford Fund, to pay for materials. She says the agency currently has enough funds to build 19 of the 25 planned houses, each costing $40,000 to $50,000. Each one takes about four months to fully construct. 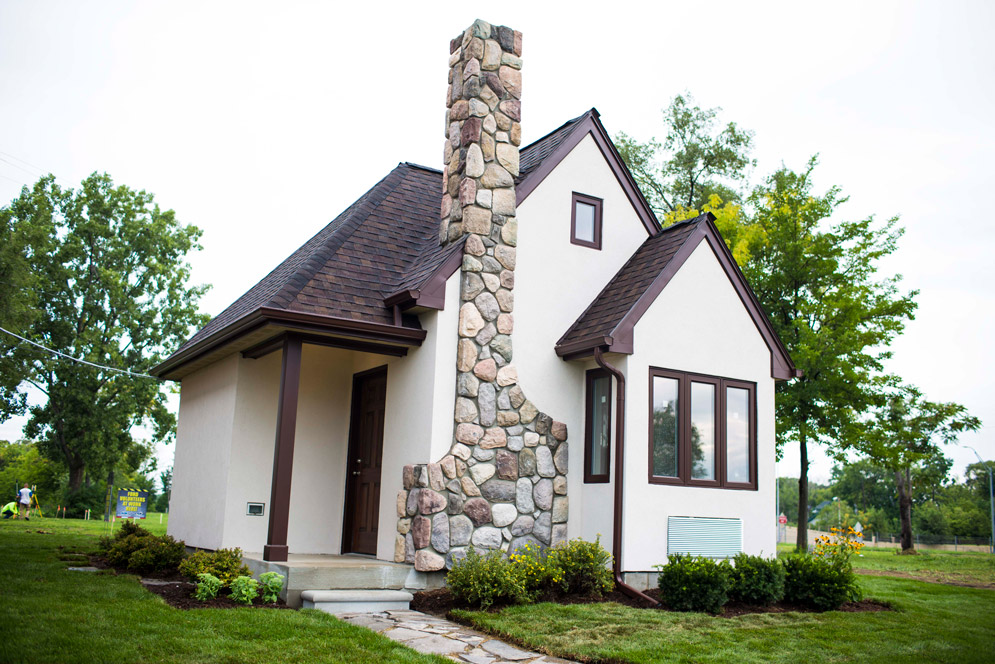 The first tiny home is a miniature Tudor with donated granite countertops and stonework on the facade, but no actual fireplace.

In 2016, when the first six homes were completed, 122 people applied for them in person, as required. Residents must live in Michigan and earn at least $8,500 a year, and many made the cut because they work low-wage jobs or live off social security or disability benefits.

Anyone convicted of a violent offense within the last decade, drug dealing in the last five years, or a sexual offense was not considered. Using a numerical scoring system, a Cass committee scored the anonymous applicants, weighing their residential history, financial readiness, and personal references.

The age of the first group of seven residents ranges from 24 to 74. All but one are people of color. One has a prison record. They earn an average income of $988 a month. Gladys Ferguson, the resident of the yellow Colonial and part of the inaugural group, says soaring rents and an arthritic condition had made finding a place to live difficult for her.

“Here you got white, black, young, old,” Ferguson says. “I like that.”

The Cass Community Social Services homes are not on wheels or made to be uprooted. Each has its own foundation, full-size appliances, air-conditioning, and an alarm system.

The Cass program requires residents to meet with a financial coach and eventually join a home ownership association. They must also attend monthly financial literacy classes and volunteer eight hours a month on projects like a neighborhood crime watch.

Tracey Harris, a sociology professor at Cape Breton University, is writing a book about the broader tiny houses trend. She predicts that the key to Fowler’s success will be the availability of continuing support for residents to help them meet the goal of ownership.

“The community-building aspect is really important,” Harris says. “With a tiny house, you can have all those things that are important to building a resilient and compassionate community.”

Fowler says the next six tiny homes are under construction. All 25 will be built for individuals or couples, but Fowler foresees a day when Cass will build slightly larger houses for single mothers with children.

If everything goes as planned, the first tenants will own the deed to their tiny home around 2023. At that time, they can choose to keep their tiny homes or sell.

Fowler thinks many people want to live tiny, and that most will stay in their homes. But troubled by critics who have accused her of forcing poor people to live in small spaces, she decided to downsize her home—in a big way.

Last October, she sold her 2,000-square-foot Victorian and moved into a windowless former boiler room on the first floor of the Cass administrative office building. She did it because she was curious what living in a 350-square-foot space was like. Seven months later, she says it’s required more of an adjustment than she thought. For example, at night there’s no getting away from the sound of a ticking clock mounted on the wall. And she shares what little space she has with a boiler.

“Tiny homes are not for everyone,” she says. “They are for people who want to do it.”

There are 5 comments on The Tiny Home Evangelist