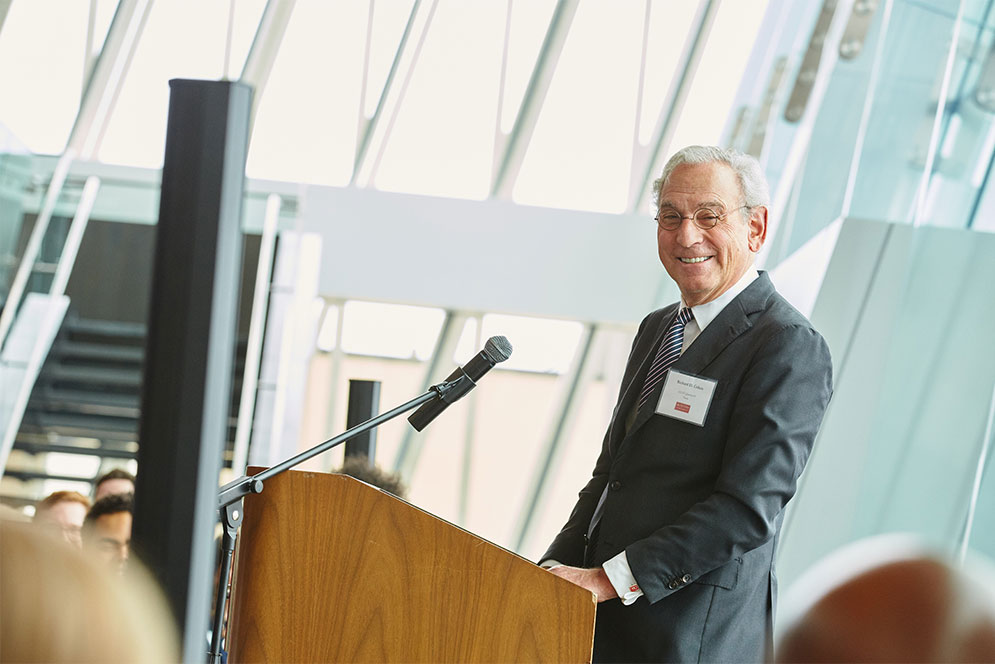 “BU is a place of incredible opportunity,” says BU trustee Richard D. Cohen (CGS’67, Questrom’69). “This sort of education shouldn’t be limited to those who have the economic means.” Photo by Dave Green

Boston University trustee Richard D. Cohen (CGS’67, Questrom’69) is stepping up once again in support of scholarships—and once again, he is challenging others to join him.

Starting today, Cohen will match, dollar for dollar, all new or increased gifts made for need-based undergraduate financial aid, up to a total of $1 million. Donors who take the Cohen Challenge will help the University in its ongoing quest to make undergraduate education affordable for all students and their families, regardless of their means—and those donors will see the impact of their gift doubled.

“BU is a place of incredible opportunity,” says Cohen, founder and president of New York City–based real estate investment firm Capital Properties. “Students who come here have access to hundreds of fields of study, nearly any kind of extracurricular or service activity, research, athletics, you name it. It’s a place to find your path—I know it was for me. This sort of education shouldn’t be limited to those who have the economic means.”

To qualify for the Cohen Challenge, any donor can give to BU’s general scholarship fund, which supports undergraduates across campus, or to a specific school or college scholarship fund. And all gifts count toward the $1.5 billion goal of the ongoing Campaign for Boston University, which will conclude in September 2019.

This isn’t the first time Cohen has led by example. In 2010, he sponsored a similar—and successful—$1 million scholarship challenge. Since joining the Board of Trustees in 2006, he has steadily supported financial aid, and in 2017, he made a targeted donation with low-income families in mind. Today, the Richard Cohen Scholarship is targeted to eligible Pell Grant recipients, allowing for increased economic diversity within the University’s traditional undergraduate population. Thanks to Cohen’s giving, support from other donors, and investments by the University, nearly one in five US undergraduates at BU is eligible for a Pell Grant, a proportion that places the school among the highest in its university peer group.

“Once again, Richard is showing tremendous leadership through his generosity,” says Robert A. Brown, BU president. “His giving has already moved the financial aid needle, and yet he understands, as we do, that scholarships remain an urgent priority. Every year, our students are arriving with stronger academic credentials. We are working to be an institution where cost is not an absolute barrier if a young person is accomplished enough to gain admission.”

Cohen’s challenge applies to current-use scholarship funds, which can be spent right away to meet financial need. Those donors who endow undergraduate scholarship funds of $100,000 or more are eligible for a different match, through BU’s Century Challenge.

In his role as founder and president of Capital Properties, Cohen, who has also endowed a professorship at the Questrom School of Business, has guided the company’s expansion into a full-service real estate investment company, with in-house commercial and residential management and development divisions. Since founding the company, he has acquired, managed, or developed more than 18,000 condominiums and apartment units and over eight million square feet of office space in more than a dozen major US markets.