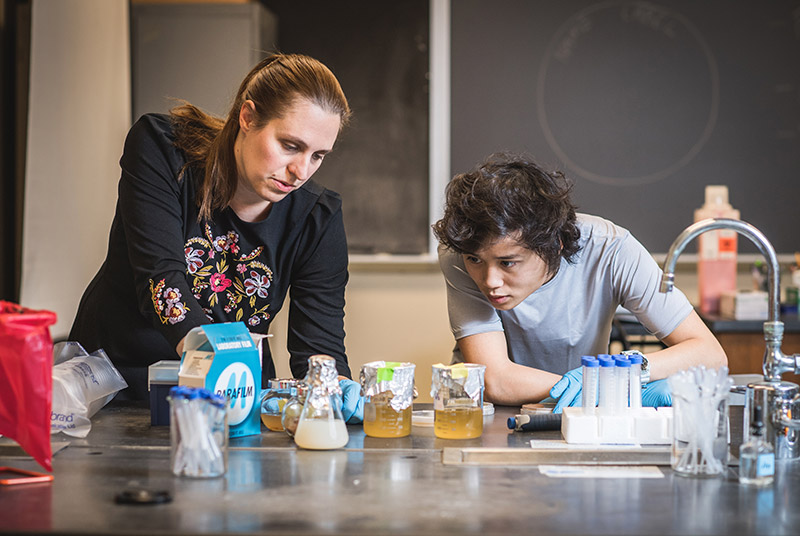 Sandra Buerger and her student Alexander Smith study the bacterial makeup of probiotics.

It’s a great time to be a bacterium.

For more than a century, bacteria have been typecast as villainous bodily invaders in the stomach-churning, fever-inducing drama of infectious disease. Now, researchers are realizing that bacteria can play the good guys, too. Beneficial gut bacteria—and there are trillions of them in the typical human digestive system—help digest and extract nutrients from everything we eat, and they can also crowd out the bad-guy bacteria that make us sick.

That’s the big idea behind the shelf full of “probiotic” supplements at your local pharmacy or grocery store. Manufacturers claim that these pills (or gummies or powdered drink packets) contain billions of live bacteria. Some doctors recommend that patients take them when they are prescribed broad-spectrum antibiotics, which wipe out good and bad bacteria alike, and millions of consumers buy them hoping for relief from gastrointestinal problems or to support general good health. But do the supplements actually contain what the labels promise, and how do they compare to fermented foods, like kombucha or miso soup, which are also teeming with microbes?

Sandra Buerger, a lecturer in natural science and mathematics at Boston University’s College of General Studies, and Alexander Smith (CGS’19), supported by a grant from the Center for Interdisciplinary Teaching & Learning, wanted to find out. (Yemi Osayame, CAS ’19, joined the project this fall.) So, they headed to the drugstore, filled up their shopping baskets, and brought their probiotic haul back to Buerger’s lab. There, they cracked open the pills, diluted the bacterial powder stuffed inside, and dabbed the mix onto petri dishes. Because the probiotic pill bottles specify what bacterial strains are inside, Buerger and Smith prepared the dishes according to those species’ preferences. Then they waited to see what would grow.

So far, their preliminary results, which they hope to publish in the future, line up fairly well with what’s advertised on the pill bottles. “The numbers from our methods have been a little lower than what’s claimed on the box,” says Buerger, “but there are definitely living bacteria in there.”

Still, says Buerger, from a bacterium’s perspective, the conditions inside the pill are less than ideal. “They are being shoved into a little pill capsule, and they might be happier in some of the other liquids, where they have more room to grow.”

To find out whether bacteria were “happier” elsewhere, Buerger decided to test the pills against popular fermented drinks that naturally contain good bacteria. She started with miso soup and apple cider vinegar, then added kombucha, a fermented tea, at the suggestion of a friend who home-brews the drink. Then, Smith repeated the process of plating the samples and growing the bacteria.

The results looked very different from the over-the-counter probiotics, says Smith. While the bacteria from the pills colonized tidy white circles, the dishes plated with fermented foods bloomed in colorful, disorderly splotches. Buerger and Smith will use gene sequencing to identify the specific strains of bacteria inside the fermented foods, but they say it’s already clear that the foods have greater bacterial diversity than the over-the-counter probiotics.

That diversity makes it tough for consumers to know exactly what they are getting when they tuck into their miso soup, and also introduces the danger of contamination. But, Buerger says, it might give fermented foods an edge over the more homogeneous drugstore probiotics. “A healthy collection of gut bacteria is not one type of bacteria. It’s many types of bacteria, so there could be potential health benefits of having more variety,” she says. It’s also possible that the diversity could help the bacteria thrive. “Bacteria interact with each other all the time. Some of those relationships are antagonistic, but other times they talk to each other and cooperate.”

The next step is finding out whether all those bacteria actually make it through the digestive system to the small intestine. “What we’re really concerned about is how they survive the trip through the stomach,” says Buerger. “The stomach doesn’t have a lot of bacteria in it because it has this high acidity level. But once the food travels through your intestines, that’s where the bacteria are going to be able to have the most action.” There, bacteria help the body produce vitamins, break down foods, and keep “bad” bacteria, like those that cause food poisoning, from moving in.

To find out what happens once the good bacteria go down the hatch, Buerger and Smith are building an artificial stomach that will “digest” the probiotic pills by churning them up with hydrochloric acid, potassium chloride, and sodium chloride, the main components of the gastric juice that helps break down food in the stomach. (Samples of the fermented drinks will go inside a permeable packet instead of a pill capsule.) After a few hours, the researchers will remove the samples and check the health of the bacteria inside, says Buerger: “Are they still alive? Are there more of them ready to grow? Is there enough to still make a difference to the digestive system?”

Ultimately, Buerger says, she hopes that the research will help doctors and consumers make more informed choices about over-the-counter and food-based probiotics. And while you should always talk to your doctor before starting a new supplement, especially if you’re seriously ill or have a weakened immune system, Buerger says that it typically can’t hurt to give probiotics a try. “I don’t think it’s going to do you any harm to have an extra yogurt,” she says.

Putting Probiotic Supplements to the Test

There are 8 comments on Putting Probiotic Supplements to the Test