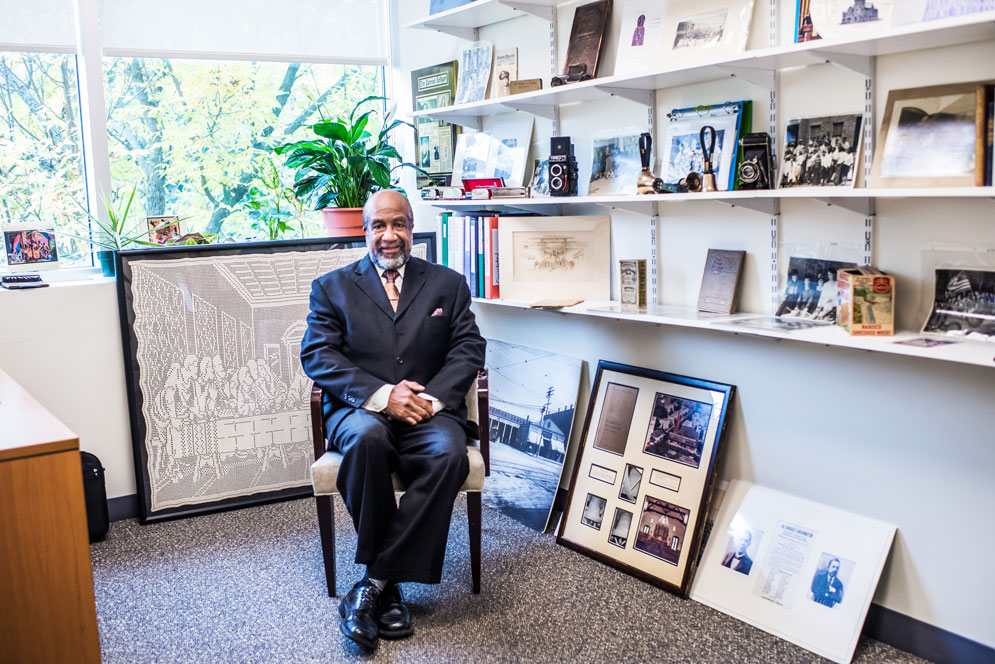 Click on the circles above to see more of what Leland Clarke displays in his Fenway Campus office.

When Leland Clarke’s father died 18 years ago, the College of Fine Arts professor of the practice of musicology and ethnomusicology was tasked with cleaning out his belongings. Among the items he discovered was a scrapbook dedicated to Boston’s Roxbury neighborhood, which included historical photographs, newspaper clippings, church programs, and more, dating from the early 1800s to the 1980s.

It was a side of Roxbury Clarke (Wheelock’75) was completely unfamiliar with, despite growing up there. As a child, he was used to hearing Italian and German spoken; his was the only African American family on his street. Clarke says the neighborhood didn’t become predominantly African American and Hispanic until the 1960s. “So finding some of these Roxbury artifacts, I said: what else don’t I know?” That scrapbook was a catalyst for what would become a collection of more than 2,000 items. “I would go to yard sales, online to eBay, and I just began this massive journey discovering Roxbury,” he says.

This is Clarke’s first semester teaching at BU. He was a Wheelock College professor of education and music for 31 years, and joined CFA after the merger of BU and Wheelock last June. He retains his old office on the Fenway Campus.

Clarke grew up playing piano and has performed as a solo artist throughout the world, working with such recording artists as Arlene Bailey, Wintley Phipps, Donna Summer, and Bishop Marvin Winans. In addition, he’s produced nine albums of his own. He also spent two decades as an early childhood special education teacher in the Boston Public Schools. His research interests include African American worship, the effect of music therapy on anxiety and depression in patients with dementia, and the impact of lyrics and music videos on children.

The walls of his office display dozens of items, but they represent only “a thimbleful” of the collection’s artifacts, he says, most of them meticulously catalogued in binders and stored in boxes. He would like to see everything digitally archived eventually in an interactive website or published in a book.

Inside his office, Clarke holds up the memento that kicked off his Roxbury treasure hunt: an event program that had belonged to his dad. The program is from what came to be known as the Boston Riot, where in 1903 supporters of Booker T. Washington and of William Monroe Trotter, founder of the Boston Guardian newspaper, battled over their differing beliefs about integration. The two early 20th-century activists held opposing views—Washington believed African Americans should find ways to “get along” with their white oppressors; the Harvard-educated Trotter vehemently disagreed with this approach and was in favor of higher education and voting rights for African Americans.

“That one little piece of flyer started this crazy journey,” Clarke says. “It just opened up this brand-new world.”

There are 4 comments on Office Artifacts: Leland Clarke