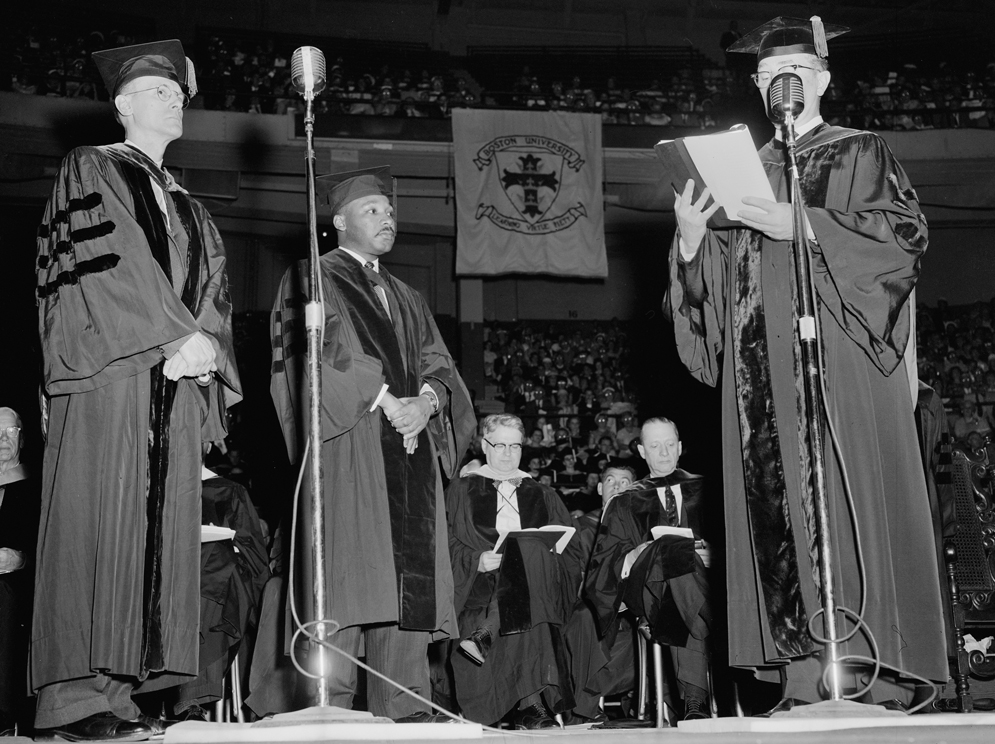 Boston University’s annual commemoration of the life of Martin Luther King, Jr. (GRS’55, Hon.’59) will be shaped this year by growing concerns about the Trump administration’s commitment to civil rights. “In a time when educational bastions are under direct threat from an administration that fears visionary ideas, celebrations that champion King’s scholarship and diverse voices—that remind us of our best possibilities, rooted in freedom—are even more precious,” says award-winning poet Kamilah Aisha Moon, who will speak at the celebration, beginning at 2 pm Monday, January 15, at the George Sherman Union.

Moon, an Agnes Scott College assistant professor of poetry and creative writing, will be among several speakers reflecting “on the depth, power, and ever-increasing relevance” of King’s words beyond the famous “I Have a Dream” speech, says Kenneth Elmore (SED’87), associate provost and dean of students, who is overseeing this year’s program, titled Words Beyond the Dream.

Monday’s event will also include remarks by BU President Robert A. Brown, as well as by Katherine Kennedy, director of the Howard Thurman Center for Common Ground, Jean Morrison, University provost and chief academic officer, poet Danez Smith, Babatunde Alford (CAS’18), and BU trustee Carol Fulp, president and CEO of the nonprofit Partnership, Inc., which supports a multicultural workforce. Music will be performed by the School of Theology Seminary Singers, the Inner Strength Gospel Choir, the BU Academy Jazz Band, and the Medical Campus Blues Band.

“We will create a chorus of voices that elevate and illuminate Dr. King’s profound thinking and action related to the issues of community, justice, peace, and love,” says Elmore.

Moon says she will read from her poetry and speak about the importance of not giving up in times like the ones we are living through. “It is a distinct honor to participate in a program held at an institution critical to Dr. King’s intellectual development,” she says. “Many of his core ethics and philosophical tenets were explored and formed at BU under the mentorship of Howard Thurman.” Thurman, dean of Marsh Chapel from 1953 to 1965, was the first black dean at a mostly white American university.

Boston University will also host the city of Boston’s annual King Day celebration, which is being held at the George Sherman Union at 10:30 am on Monday, and like the BU observance, is free and open to the public. Mayor Martin J. Walsh will offer welcoming remarks at the event, titled A Day of Service and Celebration of Rev. Dr. Martin Luther King, Jr., organized in partnership with Boston’s Museum of African American History (MAAH), the Boston Youth Symphony Orchestras (long in residence at BU), and the University. The city chose Boston University as the site for its observance because of King’s ties to BU.

“It is an honor to join with the city of Boston in celebrating this adopted son who was educated here, met his wife here, and spoke here as a Civil Rights leader,” says Marita Rivero, MAAH executive director.

Marsh Chapel will hold a special Martin Luther King, Jr., observance during its regular 11 am service on Sunday, January 14. Walter Fluker (GRS’88), the School of Theology Martin Luther King, Jr., Professor of Ethical Leadership, who will deliver the sermon, says King’s ideas are vitally important in the current political climate and that the Civil Rights leader’s words can help the nation address current concerns about “the right to speak out, about tax breaks for the rich, about treatment of immigrants, about building a wall, about deals with plutocrats and autocrats.”

The title of Fluker’s sermon, “Plenty Good Room: Contested Democratic Space and King’s Vision of the World House,” comes from a phrase King used in his 1964 Nobel Peace Prize acceptance speech, and his vision of a world of interdependence and interconnectedness, where there is a place for all. Music for the interdenominational service will include a selection of American spirituals.

The Medical Campus community is invited to celebrate King’s legacy with a lunchtime event on Thursday, January 18, at the School of Medicine Instructional Building Hiebert Lounge, 18th floor. There will be an invocation by the Rev. Julian Armand Cook, assistant director of the Howard Thurman Center for Common Ground, followed by a conversation with Jonathan Woodson, Questrom School of Business Larz Anderson Professor in Management and director of BU’s Institute for Health System Innovation & Policy. Woodson holds joint appointments as a MED professor of surgery and a School of Public Health professor of health law, policy, and management.

Marsh Chapel’s annual Martin Luther King, Jr., worship service is at 11 am on Sunday, January 14, and will feature a special liturgy and music, as well as a sermon by Walter Fluker (GRS’88), the Martin Luther King, Jr., Professor of Ethical Leadership at STH. All are welcome to attend the chapel service, led by Marsh Chapel Dean Robert Allan Hill, with the Marsh Chapel Choir singing; you can listen to the service live on WBUR, 90.9 FM.

The city of Boston’s Day of Celebration in Honor of Rev. Dr. Martin Luther King, Jr., hosted by the city in conjunction with the Museum of African American History, the Boston Youth Symphony Orchestras, and BU, and featuring remarks by Boston Mayor Martin Walsh, is Monday, January 15, at the George Sherman Union Metcalf Hall, 775 Commonwealth Ave., from 10:30 am to noon. The event is free and open to the public.

BU’s Martin Luther King Day Commemoration, Words Beyond the Dream, with readings by poets Kamilah Aisha Moon and Danez Smith, music by the School of Theology Seminary Singers, the Inner Strength Gospel Choir, the BU Academy Jazz Band, and the Medical Campus Blues Band, and remarks by President Robert A. Brown, is Monday, January 15, in the GSU Metcalf Hall, 775 Commonwealth Ave., from 2 to 4 pm. The event is free and open to the public.

The University is also planning a series of special events from April 2 to 9 to mark the 50th anniversary of King’s assassination on April 4, 1968. Find more information about those events here.

BU, City of Boston to Celebrate MLK on Monday

BU, City of Boston to Celebrate MLK on Monday
0
share this