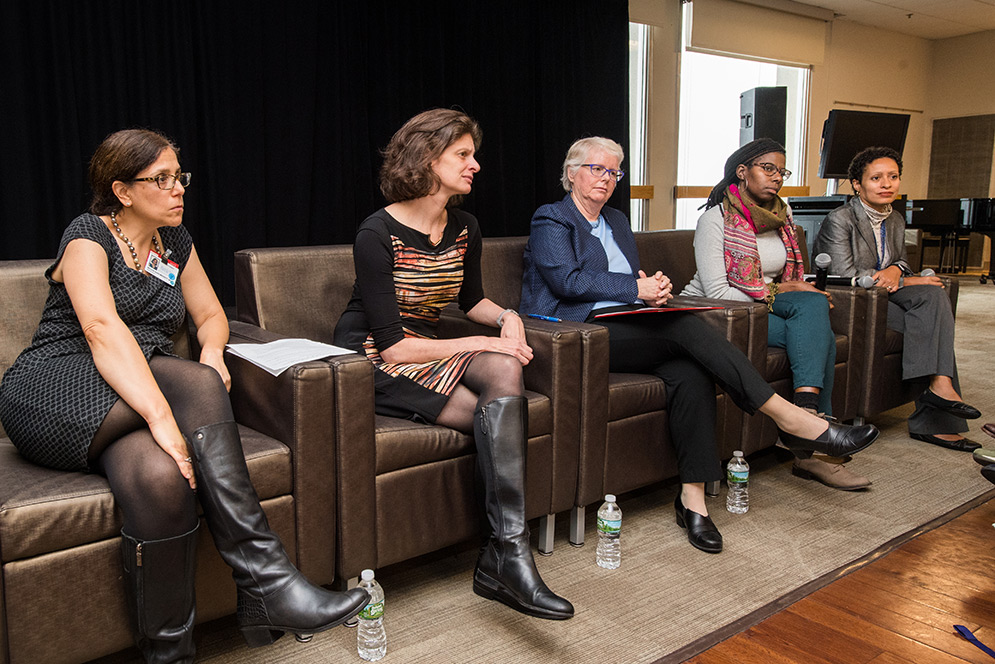 After watching Brett Kavanaugh’s testimony before the Senate Judiciary Committee last Thursday, a student in Emily Rothman’s School of Public Health class on sexual violence emailed Rothman with a request.

Julia Campbell (SPH’19) was feeling sad and angry and overwhelmed. She asked Rothman, a professor of community health sciences and an expert on sexual violence, if they could take time during the next class to discuss the hearings.

So that’s what Campbell and the other students in the class Sexual Violence: Public Health Perspectives in Intervention and Prevention did yesterday. And nearly 200 people, including Sandro Galea, SPH dean and Robert A. Knox Professor, and Jean Morrison, University provost, joined them.

Emotions ran high. People were mad that Kavanaugh was still being considered as a possible Supreme Court justice after his testimony, which was at times angry and accusatory and at other times tearful. They were also angry that Christine Blasey Ford’s assertions that Kavanaugh had sexually assaulted her when she was a teenager were being challenged in some circles. And they were angry that women who say they have been sexually assaulted continue to be doubted.

Several members of the audience who responded chose not to give their names for confidentiality reasons. One young woman said that members of Congress “are supposed to be looking out for us, but all they can do is argue with each other. They’re about to hire someone who does not not have the best ethical record and that’s for the highest office in the country. It just makes me so angry.”

Another woman, a student in Rothman’s class, said: “It infuriates me that so many Republicans don’t even care.”

And yet another woman said: “There’s a Twitter hashtag, #believeher. It’s as simple as that. We just need to believe her. We need to stop giving them the benefit of the doubt.”

Some in the audience expressed opposing viewpoints—and they were heard. For example, not everyone supported Ford unconditionally. “We don’t know what happened,” one man said. “It’s possible he doesn’t remember what happened or that it didn’t happen. I do think something happened to her, but I think it’s dangerous to assume that somebody who has dedicated his life to doing good has to step aside because of this allegation.”

The discussion was held in the Medical Campus Hiebert Lounge and drew students, faculty, staff, and administrators from schools across the campus. Galea opened by saying that it was the responsibility of people in public health “to be honest and clear about this—that privilege, misogyny, racism, and hatred are the core conditions that make sexual violence acceptable.”

There may be no higher calling in public health, he said, than to make it clear that sexual violence is never acceptable—“not in red states or blue states,” and “not in the Americas, in Asia, or in Africa.”

Morrison joined Rothman and three other experts on sexual assault on the panel—Lisa Fortuna, a School of Medicine assistant professor of psychiatry, Nicole Daley, an SPH teaching assistant, and Megan Bair-Merritt, a MED associate professor of pediatrics—in speaking briefly about the Kavanaugh hearings.

“This is not a new issue, but it is an issue that is now front and center in our national consciousness” and one that “pervades so many aspects of our lives, at work, in social settings, and at school,” said Morrison. At BU, “we will not tolerate sexual misconduct in any form.”

Morrison said that she is a geologist, not an expert in public health, but added that “as a woman who came up through the academic ranks of a scientific discipline in which women are severely underrepresented, I am personally experienced in the arena of bullying, sexual misconduct, and a system of entrenched privilege.

“This is not a new issue, but it is an issue that is now front and center in our national consciousness” and one that “pervades so many aspects of our lives….At BU, we will not tolerate sexual misconduct in any form.”—Jean Morrison, BU provost

“I am deeply troubled by the Kavanaugh hearings,” she said. Last Thursday, she texted her son, a George Washington University junior, who lives in a dorm not far from the White House, and she asked him “to head over to the hearing room and raise his voice and our family voice.

“Then I texted our daughter, who is in a PhD program in biomedical engineering, and I told her not to despair, not to get discouraged,” she said. “But I’m deeply worried that we have not yet created a substantially better environment for all these young people to grow up in.”

A child and adolescent psychiatrist, Fortuna talked about helping victims through the trauma of sexual assault. “One thing that’s most challenging is silence—the inability to express what has happened to them, to not be heard and helped,” she said. “Being heard and believed and supported is one of the first steps in being able to heal.”

“How do we help young people make sense of this,” said Nicole Daley, who works with adolescents through the nonprofit One Love Foundation, which educates young people about healthy relationships. “We know it’s resonating with them because this happened to her in high school.”

Bair-Merritt said she watched the Kavanaugh hearings not just as a researcher and a pediatrician who takes care of children who have undergone sexual violence, but as the mother of a 12-year-old and a 15-year-old. “I cried all day,” she said. “I cried not because I was sad, but because I was livid.”

Rothman, who studies youth alcohol use and dating violence, had a question for the audience. She wanted to know what it meant when Kavanaugh kept talking about beer.

A young man in the audience answered: “No one teaches us how to interact with people in an intimate way. I think he used beer as a mechanism to validate—it intoxicates us and we are not thinking when we’re drinking, and that’s why he did what he did.”

The discussion went on for more than 90 minutes. The comments about the political leaders who will decide whether Kavanaugh is confirmed as a Supreme Court justice seemed to reflect a sense of powerlessness, Morrison said. “But at the end of the day we elect those people,” she said. “If we vote and elect different people to sit in those seats, we can change the outcome.”

Conferring afterward, Rothman and Campbell, the student whose email sparked the forum, said they considered the conversation an important step. “Everybody had a chance to speak,” Campbell said. “I was really grateful that we had male perspectives. I was impressed by how many people came.”

“People shouldn’t sit alone and struggle with complicated thoughts,” Rothman said. “They should have opportunities to get together, to think, talk, share, be pushed. Everyone is struggling with this watershed cultural moment. The way through it is with other people.”