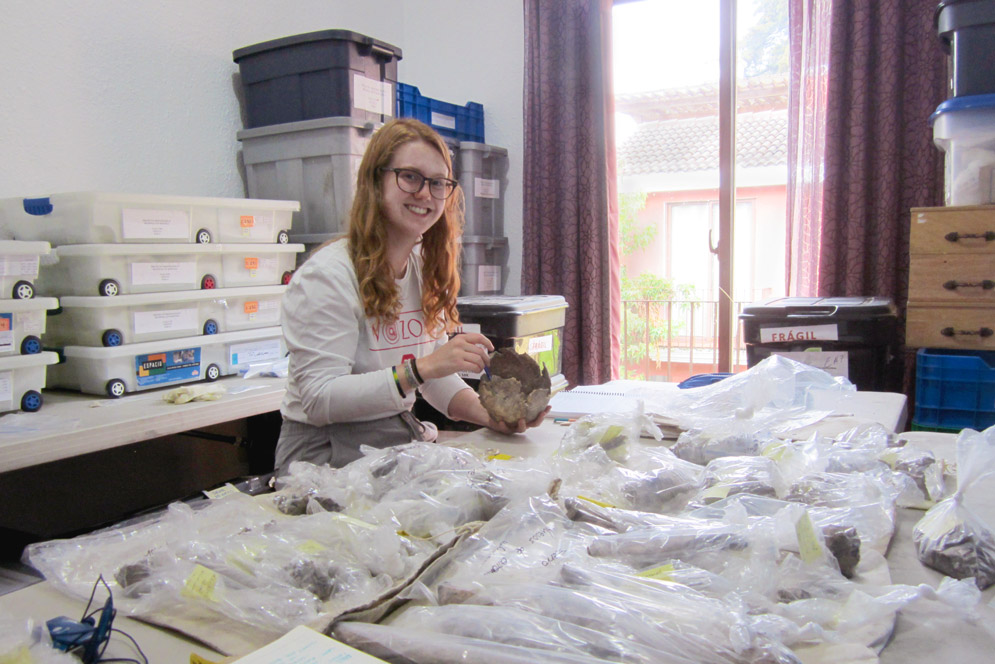 The Maya city of Xultún, a remote archaeological site in northern Guatemala, has produced a trove of material since it was first excavated in the early 2000s. Found among the ruins were elaborate murals, buildings decorated with sculptural friezes, tombs. And the 1,300-year-old remains of a woman known as Individual 7A.

Last summer, dual anthropology and archaeology major Elizabeth Hannigan (CAS’18) spent two weeks studying Individual 7A in a lab near the site. Her findings suggest that there were more roles available to women in Maya society than has been previously thought.

Hannigan’s honors thesis is a bioarchaeological analysis of Individual 7A, a Maya woman from the Classic period (ca. AD 600-900), whose remains were excavated by archaeologists Franco Rossi (GRS’15), a former College of Arts & Sciences lecturer in archaeology, who recently accepted a visiting assistant professor position at the University of Illinois at Chicago, and Aviva Cormier (GRS’16) as part of a project that began in 2008. Hannigan’s study indicates that Individual 7A was involved in bookmaking, what we’d call a knowledge-industry job today and traditionally considered a male role in Maya society.

“I don’t think there’s enough evidence to say women had an extensive role, but I think it’s unfair to say they weren’t involved at all,” says Hannigan. “I would like to contest that.”

Her findings are impressive, says David Carballo, a CAS associate professor of archaeology and Hannigan’s archaeology advisor. “For an undergraduate to pull together all these lines of evidence and make a coherent and compelling argument is very noteworthy,” he says.

Xultún, located in one of Guatemala’s national parks, is at least a three-hour drive from the nearest town, “depending on whether it’s a muddy day,” says Hannigan, who spent two months at the dig site in 2016. For her paper, in 2017 she worked at a lab called Proyecto Arqueológico Regional San Bartolo-Xultún in San Lucas, near the city of Antigua.

“I went down there with no idea what individual I’d be studying,” Hannigan says. “I just knew I’d be studying human remains because that’s what I specialize in, based on different field schools and classes I’ve taken.”

Individual 7A is well preserved, her remains intact because of the muddy soil type she was buried in. There were also other factors to make her worth studying. Instead of being buried at a family home, like most ordinary Maya, she was laid to rest just outside a structure containing murals depicting a king with several people in front of him who appear to be bearers of knowledge, such as advanced mathematics, hieroglyphic writing, and bookmaking. These murals and other evidence lead archaeologists to believe the structure was some kind of scribal center. Individual 7A was buried with tools—a bark beater and a stucco polisher—that would have been used to make paper. The Maya beat trees into paper pulp, and applied a thin coat of stucco to make a white surface to write on. 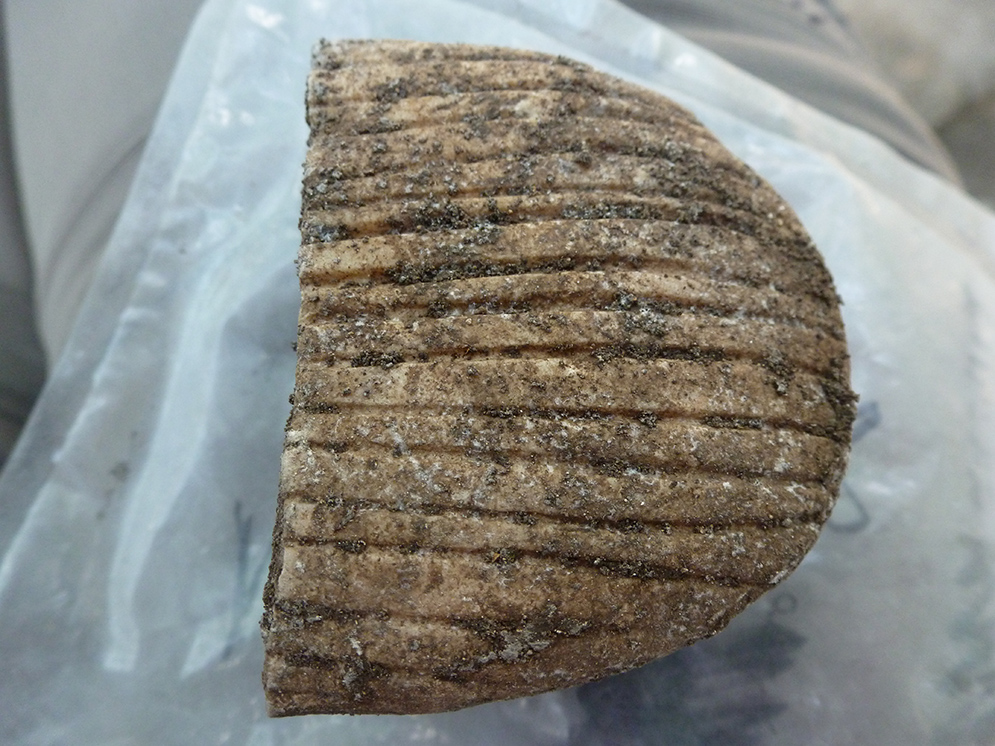 This bark beater was one of the tools used by the Maya to create paper for writing.

She performed a variety of analyses of the pelvis, cranium, dentition, and other bones to confirm that the remains belonged to an adult woman, perhaps 5-foot-5, who was likely buried in the eighth century AD.

One variable, Hannigan says, was “robustness—determining the kind of lifestyle a person might have had physically, looking at the strength of their bones to get an idea of how big their muscles were and how often they were using them. It looks like this individual had a pretty sedentary lifestyle, which doesn’t determine anything for sure, but could indicate that she was wealthier or of a higher class because she wasn’t running around every day. But her forearms had slightly higher indices of robustness, which could indicate she was working with her arms. That could be scribal work, but would make sense for weaving also.”

Another indication that Individual 7A was a woman of higher status was that two others were buried with her, including a child. “Your everyday person would not be buried with additional individuals,” Hannigan says. “They were sometimes put there as an act of ancestor veneration.” In addition, Individual 7A was buried in a flexed position, with her arms and legs pulled in, which suggests she might have been wrapped for burial, another possible indicator of class.

Individual 7A’s exact role may never be clear, she says. But along with suggestions of female scribes depicted on ceramics found elsewhere, the findings indicate that “women had more involvement in artisanal production and scribe-like positions in this society than people thought, that the society was a little more flexible than was previously thought.”

The Minnesota native is back home now, taking a year off, studying for the GRE, and planning to apply to graduate programs in forensic anthropology.

Hannigan’s work has impressed department faculty. “She came in four years ago and was in my Introduction to Archaeology class and just rose to the top of the class immediately—and it was over 100 students,” Carballo says. “She had had a little background in anthropology in her high school, which is pretty rare. Her writing is so polished, and she is extremely impressive in being able to combine different disciplines, in this case forensic anthropology and archaeology, with the theory of gendered economy.”

Hannigan won the Michael A. Sassano III and Christopher M. Sassano Award for Writing Excellence in the Social Sciences for her thesis.

“Some of what Elizabeth’s work is doing is shining a light on women having some important economic role beyond the household context,” Carballo says. “She synthesized a lot of existing information on gender roles in Maya society and highlighted how this case gives us a new window into women’s more public or scholarly roles.”

Examining a Woman’s Role—1,300 Years Ago

There is 1 comment on Examining a Woman’s Role—1,300 Years Ago