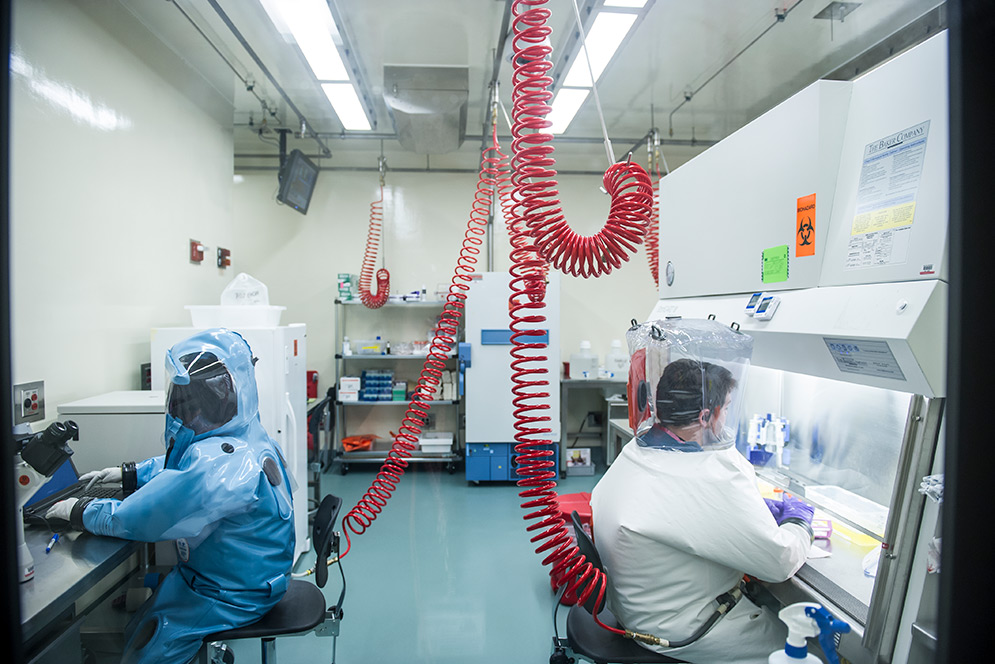 “This is clearly an important step for the NEIDL,” says Ronald B. Corley, NEIDL director and a School of Medicine professor of microbiology. “This will permit us to fulfill our mission of studying emerging pathogens and developing diagnostics, therapeutics, and vaccines for these pathogens, even those that require BSL-4 containment. It has taken a very long time to get to this point, but the time that has passed has not dampened our enthusiasm—and excitement—to be able to start BSL-4 work.”

NEIDL microbiologist Elke Mühlberger says the lab’s first Level-4 projects will examine how the Ebola virus damages cells in the liver, and why it triggers such a powerful inflammatory response. Answers to those questions, she says, could speed the development of a therapy for Ebola virus disease, which sickened tens of thousands of people and led to more than 11,000 deaths in West Africa in a 2014–2016 outbreak, and sickened 59 people and killed 29 in an outbreak in the Democratic Republic of Congo this past May. The country’s health ministry reported a new outbreak yesterday, which has killed at least 20 people.

Ebola virus causes a rare but life-threatening disease that has become a global public health threat, traveling to the United States and Europe during the 2014 outbreak. There is no available FDA-approved vaccine or therapy for Ebola virus, which along with the related Marburg virus, arrived at NEIDL earlier this week.

Mühlberger, a MED associate professor of microbiology, says the researchers’ plans include at least three projects involving the Ebola and Marburg viruses, all funded by the National Institute of Allergy and Infectious Diseases, which also provides more than $10 million a year to help underwrite the cost of operating the BSL-4 in the NEIDL. The first project, which will look at Ebola’s damage to the liver, will use human liver cells generated from induced pluripotent stem cells at BU’s Center for Regenerative Medicine by stem cell biologist and tissue engineer Gustavo Mostoslavsky, a MED associate professor of medicine and microbiology.

“We are excited to use these cells,” says Mühlberger, “because the liver is one of the main target organs of Ebola virus infection. We will use Gustavo’s cells to find out why Ebola virus is so devastating for the liver.”

A second project, which follows up on research conducted by NEIDL researcher John Connor, a MED associate professor of microbiology, will examine why the Ebola virus triggers an inflammatory response in specific immune cells. Mühlberger says researchers will also work with the Marburg virus, hoping to learn why it kills humans but not Egyptian fruit bats, a mystery that has been studied by Thomas Kepler, a MED professor of microbiology.

Safety and Security Are Paramount

“The need for this facility is even more acute today than when it was first built,” says Corley. “And we remain committed to being completely transparent in our operations, and maintain the NEIDL with the greatest attention to safety and security.”

Kevin Tuohey, executive director of research compliance at Boston University and Boston Medical Center, says the arrival of the Ebola and Marburg viruses has been eagerly awaited and was meticulously monitored. Tuohey says transportation of Level-4 agents is regulated by several authorities, including the US Department of Transportation, the Centers for Disease Control and Prevention (CDC), the International Air Transportation Authority, and the Boston Public Health Commission. Deliveries of the agents to the NEIDL, he says, are coordinated with Boston Emergency Management, Emergency Medical Services, and Boston Fire and Police Departments, as well as the Massachusetts State Police.

During transport, Tuohey says, Level-4 agents are packaged in accordance with the Department of Transportation’s “triple packaging” regulations, and BU requires an additional level of packaging in the form of a secured rigid material over the pack case. Shipments are carefully tracked with GPS. BU requires each delivery to have two drivers, both of whom are reviewed in an annual clearance process.

Tuohey says the NEIDL has bolstered its preparation for Level-4 research with the hiring of two new Environmental Health & Safety officers. Shannon Benjamin is the new associate director for high containment/BSL-3 BSO, and Nadya Yun is associate director for maximum containment/BSL-4 BSO. Benjamin comes to BU with 10 years of biosafety experience, most recently at Brown University, and Yun has two years of biosafety and compliance experience following 10 years as a researcher and research manager. She comes to BU from Environmental Health & Engineering, Inc., and Harvard Medical School, after working in BSL-4 at the Galveston National Lab and University of Texas Medical Branch.

In December 2017, after more than three years of review, BSL-4 research at the NEIDL was approved by the CDC, and last December the lab received final approval from the Boston Public Health Commission. All BSL-4 research conducted at the NEIDL must also be approved on a case-by-case basis by BU’s Institutional Biosafety Committee, which was created under National Institutes of Health guidelines to review research involving biohazardous materials.

Mühlberger says NEIDL researchers are excited to finally begin work with Ebola and Marburg viruses. She says the lab’s first step will be to propagate these viruses to produce enough material for experiments. The next step will involve inactivation procedures, so that material can be safely moved from BSL-4 to BSL-2, where most of the research will take place. She says the work will be conducted by several researchers who have been trained to work at BSL-4. They include senior research scientist Judith Olejnik, research scientist Adam Hume, research technician Jennifer Pacheco, and PhD student Whitney Manhart (MED’23), the first student trained in BSL-4 work at the NEIDL.

Those researchers will be joined later this summer by Robert Davey, a highly regarded virologist whose research bridges the fields of virology and cell biology, and by Anthony Griffiths, a virologist who studies how highly pathogenic viruses cause disease. Both come to the NEIDL from Texas Biomedical Research Institute, a private research center in San Antonio, Tex.